It did get chilly at night, and we’re thankful for that. I didn’t quite need the blanket that Michael, one of our cabin mates, handed me as a late gesture, but at least I slept comfortably. We have no idea how today will turn out, but regardless, a decent nights rest is assured.

Sleeping in is not an option though, as the morning light, punctuated by patches of low fog, is far too pretty to ignore… 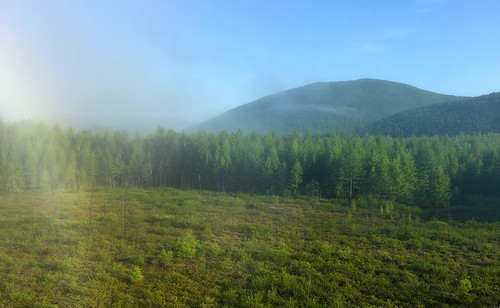 The two gents sharing our cabin are still asleep, so we step out into the corridor, make ourselves some tea from the always-on Samovar, and drop down one of the louvers. The air is chilly for sure, but fresh, and with the Taiga forest within touching distance, heavily aromatic too.

Train 363 will eventually cover a distance of 1469-km or 913-miles, calling at no less than 78 stations along the way, stopping practically every 20-30 minutes. And yet, we’ve been keeping impeccable time. A lot of these stops facilitate crossings with east bound freight trains, in what is essentially a single track route, but more often than not, our train provides a lifeline to workers on the Baikal – Amur Magistrale or BAM. Picking up a worker here, dropping off a couple there… 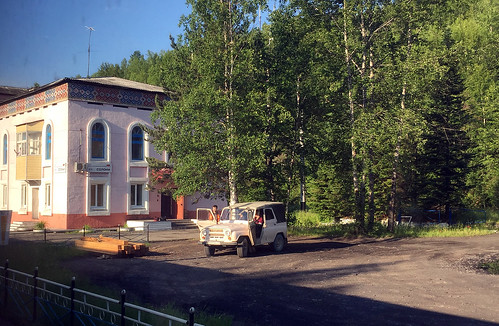 We’ve barely finished our first cup of tea, when we’re enveloped by total darkness. It’s the infamous Dusse-Alin tunnel, with 2-km and a very checkered past to its credit. Work on the tunnel began in 1939, a year after Stalin proposed building the Baikal Amur Magistrale, but not a single train ran through it until 1984. In between, several hundred forced laborers from adjoining Gulag camps met their gory end; the tunnel itself was abandoned for over two decades, as work on the remainder of the railway lay incomplete; and eventually, the backblast from a jet engine was employed to melt down the humongous mass of ice that had by then filled the void.

Urgal, a coal-mining town, lies about 50-miles west of the tunnel, and in the brief halt we have here, several people alight. It’s also one of three junctions on the BAM route, with a branch heading south to meet the Trans-Siberian at Birobidzhan.

A few miles ahead lies Novy Urgal or New Urgal, our first lengthy stop for the day. A massive ferro-concrete structure makes up the station building here, fronted by a wide plaza-like platform, with large metal reliefs, celebrating the construction of the BAM Railway, adorning the central facade. At the station’s west end stands a well-preserved steam locomotive, American built, no less. 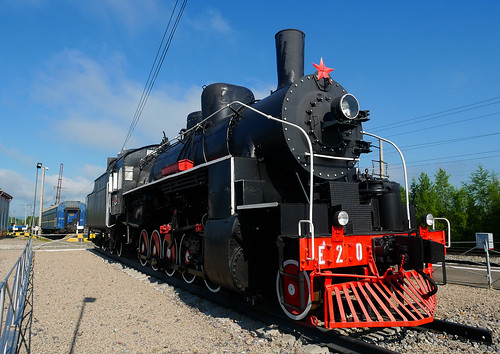 Michael and Farhad are up by the time we pull out of Novvy Urgal. Farhad, an Uzbek, is definitely the more sociable of the two. He works for the Railways, speaks a few words of English, and talks nineteen to the dozen. He’s curious to see photos of our respective homes, and to know what rate of mortgage we’re paying. He’s most disappointed to learn that I’m only renting.

Michael, or Mike as he prefers to be called, is a Forest Engineer. Doesn’t say a whole lot, and can best be described as badass. He does, however, take a particular shine to our Russian – English dictionary, a piece of literature that promises to keep him occupied for much of the day. 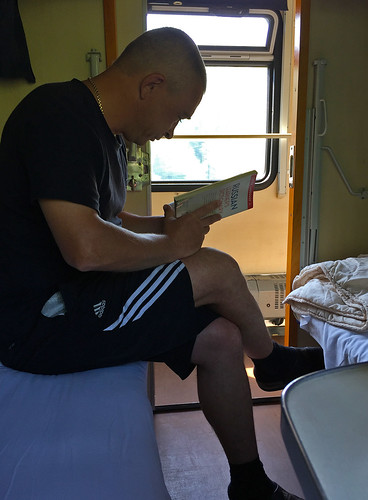 More than two decades after the Trans-Siberian had been completed, Stalin’s biggest worry remained the Chinese. He feared that the route’s close proximity to the border would always make it vulnerable, and determined that the construction of a new railway would not only provide an alternative to Russia’s vital trans-continental link but also open up parts of mineral-rich Siberia, that had so far remained untouched. In 1938, work commenced on the Baikal Amur Magistrale.

In this part of Eastern Siberia, large swaths of pristine Taiga are all the eye can see. Forests so dense, they appear like a thick green carpet draping the hillsides. The summer months, no doubt, masking just how inhospitable this region can be. 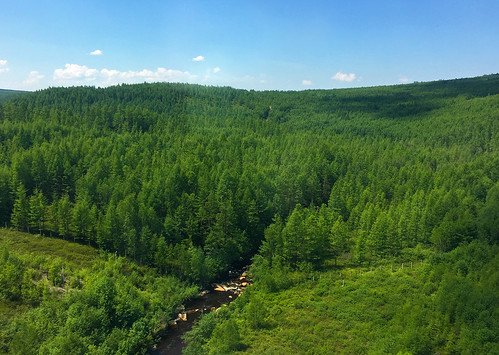 For only 90 days in the year does this part of the country remain frost-free. Understandably, one of the biggest engineering challenges in building the BAM Railway was dealing with permafrost. After several sections of freshly-laid track caved in completely, rendering in their wake messy swamps and hundreds of bewildered workers, Russian engineers finally settled on a solid foundation of insulating rock, over which rails made of cold-resistant steel were laid. It added several more months, and a considerable amount of money to the construction effort, but got the job done.

A short distance west of Novvy Urgal, the verdant Bureya River valley comes into view, who’s course we meander along for a while. The Stanovoy range of mountains provide a distant backdrop here, adding texture to the scene. 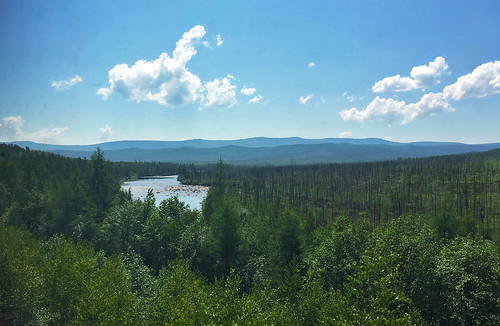 Alonka is next, who’s larger than utilitarian station building sports a metal relief of two women. Its a refreshing change from all the male-dominated sculptures we’ve seen along the way, and no doubt pays tribute to the many women that participated in the building of this railway. 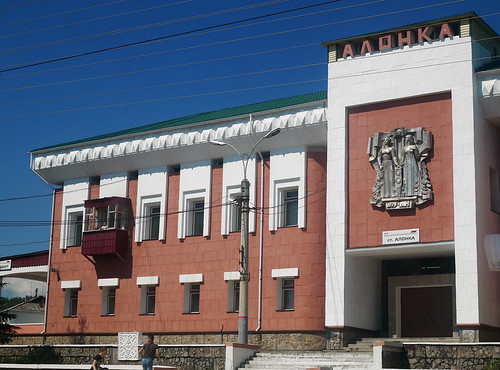 At the bottom of the relief are inscribed the years 1975-84. After Stalin’s death in 1953, work on the railway came to a standstill, and remained so for almost 20-years. In 1975, Brezhnev ordered resumption of the work, and this time, promising to make it a “clean” project, enlisted volunteers from the communist youth league or Komsomol. In 1984, almost five decades later, Stalin’s ambitions were finally realized.

East of Etyrken, we pass a large lumber yard and ancillary railway facilities, the first real sign of any industrial activity along the route. Its a fairly large settlement too, with colorful housing blocks lining the approach to the station. Despite all of that, we only halt here for a measly 3-minutes. 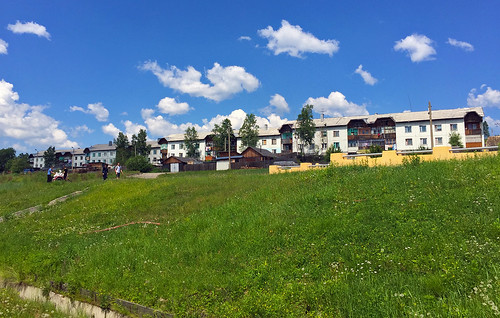 Closer to Mustakh, wildflowers make an appearance, lighting up the countryside in vivid hues. Cheery as the sight is, we lament their short lifespan, for its a matter of weeks before the ground here is blanketed white. 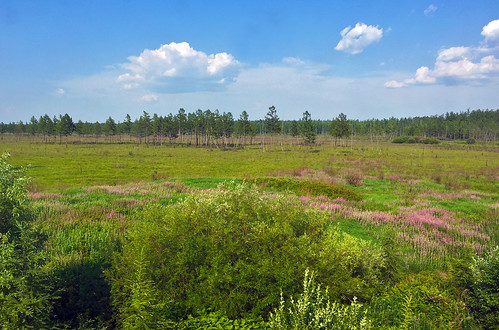 At 13:47 local time, we come to a halt at Mustakh. Our opposite number arrives within a couple of minutes, halts for a few and then sets off towards Komsomolsk. And then, we begin to ease out of the station. A scheduled 9-minute halt executed with the utmost efficiency.

We cross the Byssa River just shy of Fevralsk, where a mother and her daughter can be seen frolicking along the west bank. Fevralsk sports a sizable freight yard, and we have another long scheduled stop here – 35-minutes in all. We gain two additional carriages at the rear, and an hour as well. We’re now Moscow+6. 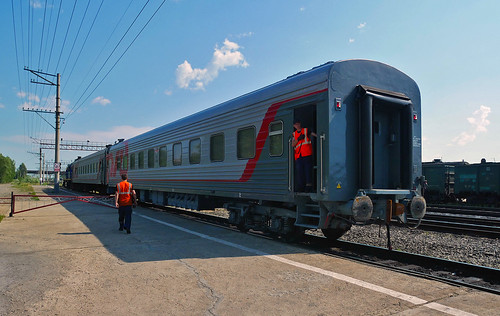 Moving past Fevralsk, the mountains recede into the horizon, and the Taiga too, although still abundant, is setback further from the rail alignment. A little west of town, the Selemdzha River, known to bear copious quantities of gold, is crossed…

Everyone’s heard of the Siberian winter, but summer extremes in these parts are a rarity, and we’re experiencing it first hand. It’s a little past 4 PM local time and the thermometer in the carriage reads 30C or 86F. And that’s only expected to rise. We try different ways to combat the heat, stay cool and keep our humor. Taking turns standing in the corridor, lowering the window blinds to block out direct sunlight, pressing our heads against the open louvers, fanning ourselves. All of those efforts proving to be futile.

Train 363 is not particularly long – even after Fevralsk, we’re capping out at seven carriages – so we decide to take a walk through it. There’s no air-conditioning in any of the carriages, and yet, no one’s complaining. The chair car, at least, seems the best ventilated of the lot, as it lacks the partitions the sleeper carriages have. So we find a pair of forward-facing seats and settle in. There, unrattled by the heat, two little girls keep each other entertained, while their parents take a snooze. We decide to stop whining, at least for the remainder of this journey. 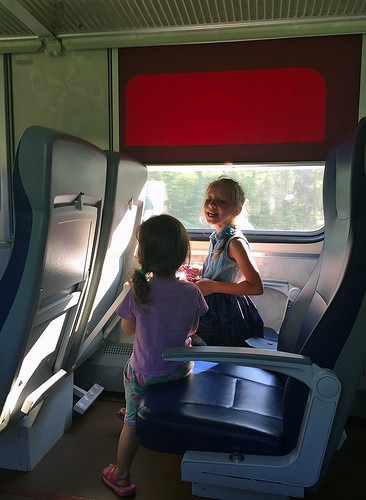 When it begins to cool off a little, we return to our sleeper carriage. Mike, it appears, has thawed quite a bit since we left him. No doubt, a combination of SK’s tireless ice-breaking efforts through the day, and some Vodka that’s just been offered to him. He takes it willingly and obliges us with a smile. About bloody time!

He reaches for our Russian to English phrase book, grabs a piece of paper to scribble on, and tries his best to communicate. We invariably respond with an enthusiastic da, the affirmative in Russian. Rarely does that translate to the right answer, and only makes him more excitable. He pours another shot, scribbles some more, and finally takes out his phone to share some bizarre videos with us. It’s turning out to be quite the evening.

East of Tungala, the mountains come into view once again. They’re fairly distant this time, but beautifully silhouetted in the evening light. 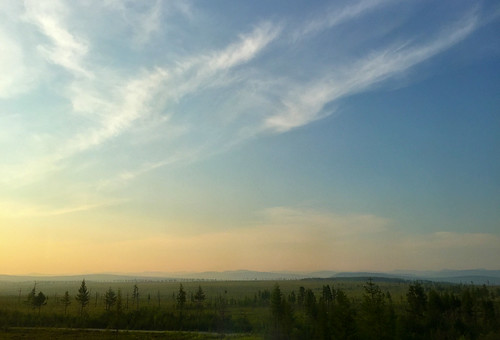 Tungala boasts a quaint, colorful station building, which, for a change, is a lot more modest in its construction. The light is exceptional this evening and we walk over to the front of our train for a better look at the western sky. A freighter approaches from the west, as another one patiently awaits the crossing, and an overtake by our train. 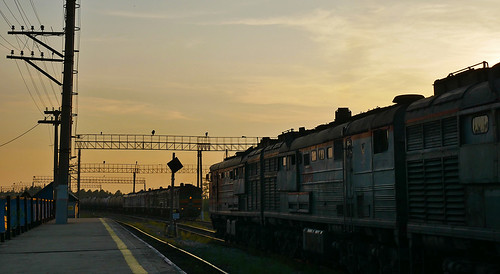 Its almost 10 PM local time when we pull into Ogoron, where a rather inexplicable sculpture drapes the station’s facade. Its our last stop for the day before darkness descends.

The Zeya River is crossed soon after our departure from Verkhnezeysk, with a half moon shining bright and reflecting off its surface. Its an unforgettable sight to end the night with, one that no camera could ever do justice to.

Next on the Magistrale Diaries: Tynda, the BAM Capital

A full set of pics from Day 3 of our trip can be seen here.