I was back in Rio a little over a month after my first visit, ostensibly to take due advantage of my Brazilian visa – one that required four trips to their consulate in BA to obtain. And although that was a strong enough reason to return, in reality, I was there to experience first hand that once-in-every-four-years spectacle, the Summer Olympics.

I can’t remember the last time I’ve cracked open a can of beer that early in the morning, but after having waited in a long line for over an hour, it was the best feeling in the world. And nothing more uplifting than to do so at the morning track and field session at Rio’s Olympic Stadium… 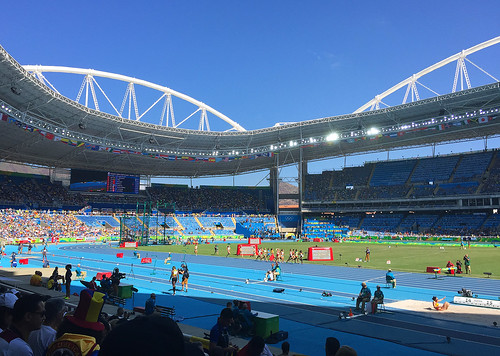 Watching the Olympics on television is one thing – and I was more than grateful to have it on the same time zone for once – but nothing beats the experience of being there in person. To be amongst the worlds greatest athletes; to share an arena with supporters from every corner of the globe; to join the home crowd as they cheer on one of theirs, and to see some of the most obscure nations in the world taking on the powerhouses – that feeling is second to none. In many ways, it was a dream come true for me, and it was just getting started. 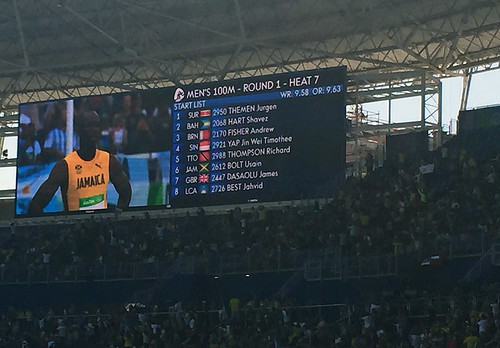 Back in June, in my enthusiasm to book, I had purchased tickets for 6 different events, which I hoped to view over the weekend. There was just one problem though – 5 of those events were on a Saturday! And of course, I hadn’t bothered to investigate where exactly the venues were in relation to one another… 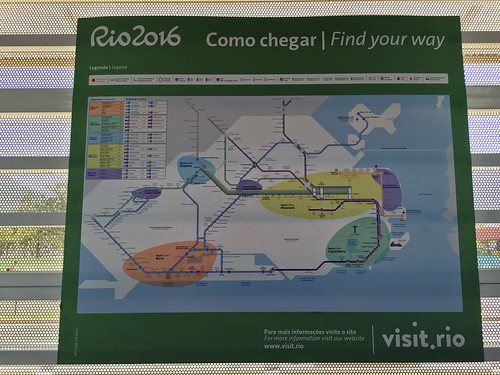 As it turned out though, getting around was perfectly feasible. To be sure, there were long queues everywhere and fairly lengthy transit times too. But given the large distances between some of those Olympics zones, and the sheer number of people being moved, I thought the organizers did a fabulous job of it. Buses and trains arrived in quick succession; there were volunteers posted everywhere, and the signage – all of it bilingual – was more than adequate. 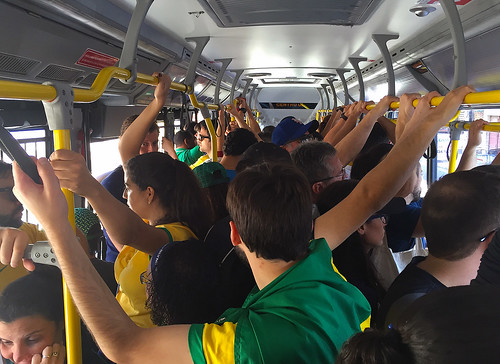 Barra Olympic Park, some 20-miles west of the city center, was home to 9 sporting venues, which kind of helped my cause since I had two events there. The walk from the bus terminal to the park entrance was a long one, but with each step, the excitement amongst all of us walking towards it, was a lot more palpable. 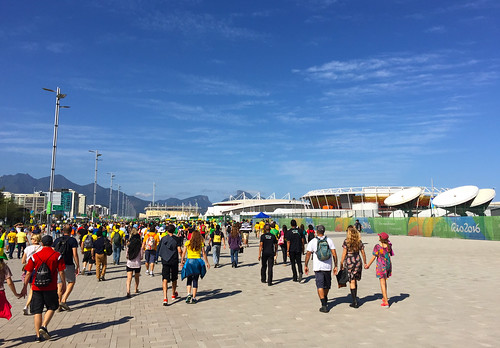 Probably the most unfortunate name at this year’s Olympics was that of Chinese gymnast, Dong Dong. He was not short on talent though – no pun intended – and led the field for most part, eventually finishing in second place. But maybe the greatest moment leading up to that trampoline final was when one of the Russian gymnasts – after having perfectly executed several gravity-defying twists and somersaults – missed his mark on his final landing and failed to qualify. As the tearful young Russian was led off the stage by his coach, the crowd got up on their feet to give him a standing ovation.

At the Maria Lenk Aquatics Center nearby, my seats were better suited to water polo and synchronized swimming but I was in fact there for the Women’s 3m springboard event. Even from my distant vantage though, it was a truly humbling experience. Blink an eye, and you would’ve missed most if not all of the action. It’s a good thing I wasn’t a judge that evening, cause I would have been doling out straight 9s to every competitor. 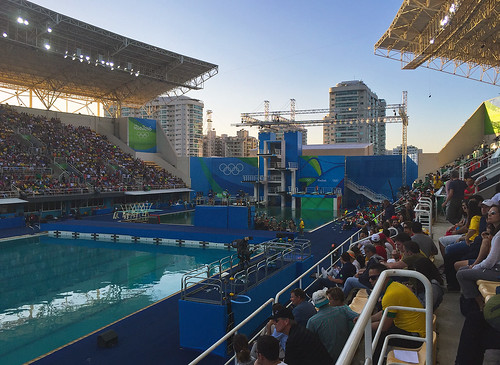 In the practice pool outside, as the evening sun cast a warm glow on the distant hills, synchronized swimmers were perfecting their routine. They were less than 24-hours away from the start of competition. If the very thought of holding your breadth underwater is daunting, imagine doing so as you perform acrobatic feats upside down, in perfect harmony with others. Respect. 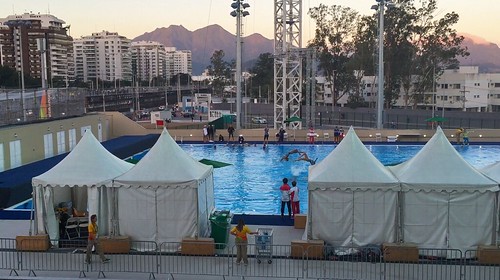 18-miles or 30-km separated the Barra Olympic Park from Copacabana, and had I known that then, I would’ve probably given up making it for my next event in time. But just as well my phone was on airplane mode. I followed the signs and the crowds, queued for one of the Olympic specials, transferred to one subway line, then to another, then a bit of walking… 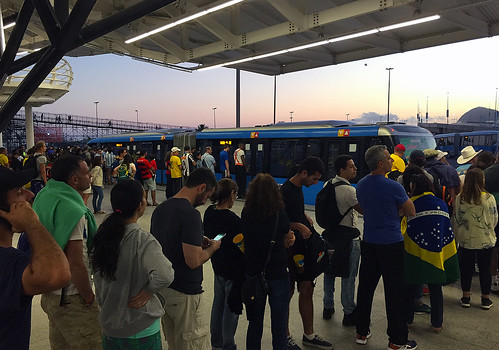 And voilà – I made it just in time for the evening session of beach volleyball! A temporary structure on the white sands of Copacabana, purpose-built for the Olympics, it was by far the most dramatic setting for an event. And true to its namesake beach, a party-like atmosphere ensued, complete with DJ, dancers and resident band. 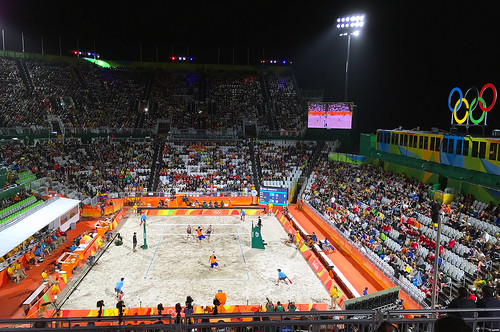 A few hours later, I was right back where I started. For the night session this time, to watch, amongst other events, the Women’s 100m finals, Men’s long jump, and some pole vaulting. For the latter, I developed a completely new admiration.

There’s no doubt, the night session has a different vibe to it, and my seats – now closer to nose bleeds – allowed for a very different vantage too. But there’s something to be said about track and field events – there’s so much going on, so much to absorb; not a dull moment around. It’s definitely where you get the most bang for your buck.

And there it was – my tally for the day – a half marathon and change worth of walking. So worth it! 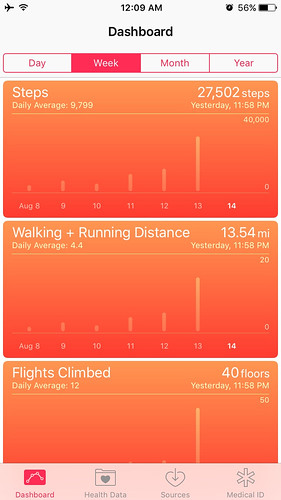 Sunday was a lot more tranquil in comparison, with just the single event to attend. It was the one racket game I identify with most, and can play with some degree of confidence. That is, until I saw the professionals treat the ping-pong table like a chessboard. Reality check. Served. 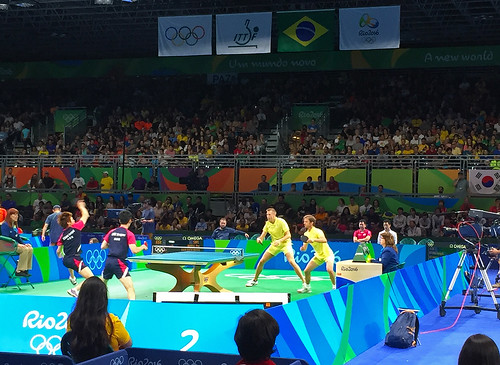 The Games are behind us now, and we all know what a bad rap Rio, and Brazil in general, got from everyone, the western media in particular. The country’s problems – and it has more than its fair share currently – aren’t going anywhere in a hurry. But all that negative press is unjustified. For me, it was an absolute privilege to be there, and I think the Brazilians pulled off a remarkable feat. Lets at least give them their due, for a job well done. Muito obrigado, Rio!

A full set of pics from my visit to the Rio Olympics can be seen on my Flickr.

One thought on “One Marathon Weekend”