Malbec is probably the first thing that comes to mind when someone mentions Mendoza. Possibly Mt. Aconcagua, for those more daring. Other than being a gateway to wine country, the city of Mendoza itself rarely finds mention. There are no riveting edifices; no monuments or museums of note, not even an imposing Iglesia. Taking cue from that, the city administration took it upon themselves to make the town as inviting as possible, no matter how long you choose to spend in it.

The result: Mendoza today is a perfectly pleasant city to amble around in, dotted with beautifully kept plazas, and plenty of exciting dining destinations. Boasting wide tree-lined streets, it’s also incredibly green. Surprising, when you consider it’s essentially located in a desert. Back in the day though, town planners were smart enough to channel the runoff from the precordillera (Andean foothills), through a network of irrigation channels, and the results are there for all to see… 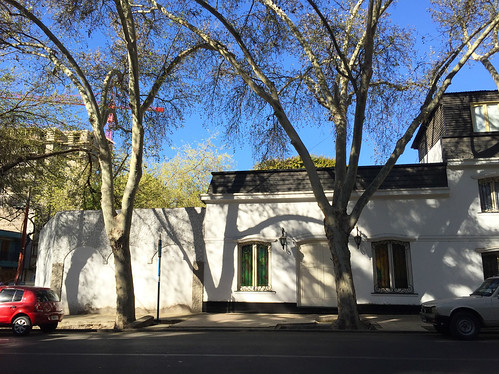 The province of Mendoza – of which the namesake city is its capital – is one of four major wine growing regions in Argentina. Within the province itself, there are at least three distinct wine growing areas, all of them located to the south of the city. The first of these, Maipu, is practically a suburb today, but has some of the oldest vineyards, or bodegas as they’re locally referred to, in the country.

We continue past Maipu, eventually turning off some 12-miles (18-km) later onto Ruta Nacional 7, and the wine growing region of Luján de Cuyo. Located at a higher elevation than the city of Mendoza, it is also sufficiently removed from its urban sprawl. Here, Bodega Ruca Malen is our first port of call. 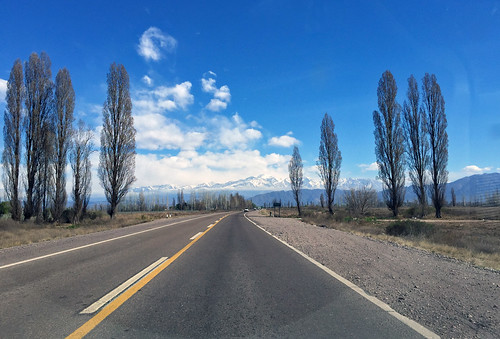 In Mapuche-speak, Ruca Malen means “the young girl’s house” and the bodega does well to work that significance into its logo. There aren’t any young girls to be seen here though, only wine enthusiasts, some tourists, and serious alcoholics like us. A group has already gathered in the lobby for a winery tour that’s about to commence, but we decide to skip it. It’s lunch time already and getting a pick of the tables to enjoy a selection of wines and picadas, not to mention the stunning views, seems like a much better idea. 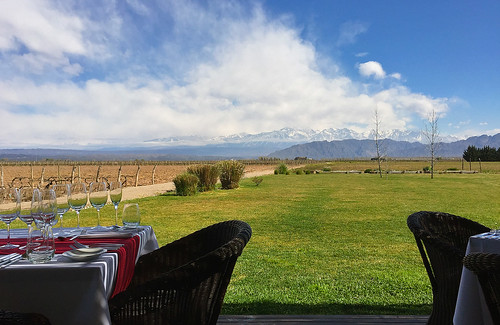 Most bodegas offer tours of their facilities, the cost typically including a tasting session. A lot many of them have their own bars and restaurants too, and if you’ve made a reservation for a meal, chances are, they’ll probably throw in a tour for free. It’s all fairly good value for money.

But deciding which bodega to pick can be a challenge. Despite the plethora of resources out there, and the city and province of Mendoza having done a perfectly respectable job of promoting wine tourism, individual websites aren’t always the most informative and / or accurate. Even some of the classier looking bilingual ones fail to deliver. It’s therefore worth calling ahead and checking. On my part, I’m fortunate to be in good company – my traveling companion TM happens to be a sommelier-in-training!

Our next stop, Bodegas Salentein, lies about 50-miles (80-km) further to the south in Valle de Uco, the last of three major wine producing areas in Mendoza. Part contemporary arts museum, part sculpture park, the visitor center here is straight out of a center-spread from the Architectural Review, blending seamlessly with its environs; combining elegance with clever sightlines. 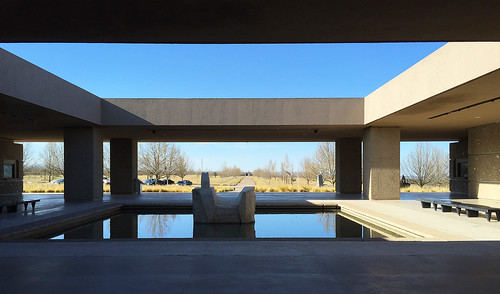 Being the southern hemisphere, the grape harvest in Argentina commences only in February each year. Which means there’s not a whole lot to observe in the vineyard itself, if you happen to be there at the tail end of winter. Regardless of the season though, the magic of wine making all happens indoors, in each bodega‘s wine-production facility i.e. Think large fermentation chambers, cellars full of oak barrels and the like. Which is why so much thought is put into the very design of these facilities. At Bodegas Salentein, La Catedral del Vino – literally, the cathedral of wine – occupies pride of place. 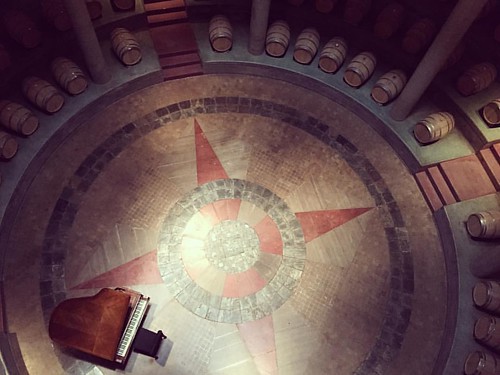 The French brought the Malbec grape to Mendoza in the middle of the 19th-century and quickly realized how much better it performs here. A combination of alluvial soils, high altitude (notably in Luján de Cuyo and Valle de Uco), extended periods of sunshine, and a significant difference between day and night temperatures, provide for some of the most complex and evolved Malbecs on this planet.

But as synonymous as the grape has become with Argentine wine today, Malbec isn’t the only varietal of red that Mendoza does an exemplary job of. Take the 2006 Merlot from the same bodega as an example, which TM describes as “a thing of beauty.” As we take our time savoring it, we marvel at the setting that is the Uco Valley… 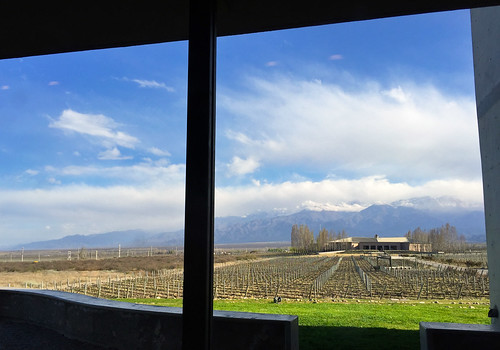 Also in Valle de Uco, and not far from Bodegas Salentein lies Bodega La Azul. Compared to some of the behemoths in the area, La Azul is more finca or estate-like, than a full-blown bodega. And as is common amongst its larger wine-growing neighbors, it also dabbles in the business of hospitality. We’ve chanced upon Casa de Huespedes Finca La Azul by sheer luck, and it’s the kind of place you’d wish you had checked into for eternity. Sadly, we have only a night here. 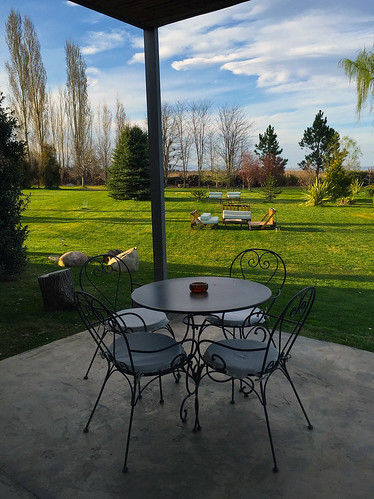 Hosts Pablo and Shirley will make you feel at home right away, and are some of the nicest people your likely to meet. Their property, along with the six guest rooms they offer are all beautiful. The service is warm, the food is excellent, and their very own Sauvignon Blanc is one of the best I’ve had the pleasure of sampling. And then there’s Canela, a year-old Border Collie who will melt your heart the moment you step foot in her domain – the lush acreage that surrounds Casa de Huespedes Finca La Azul. 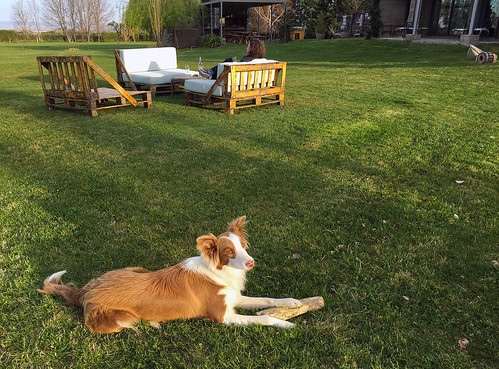 In the Uco Valley, the daytime high averages about 57F (14C) throughout the year. Under the sun, you won’t even be reaching for a light jacket. The evenings on the other hand, are always very chilly. By the time we’re done with our last bottle of vino for the day, the wood-burning stove has already been lit in our room. The crackling of a fire – always a luxury – coupled with the copious amounts of wine consumed during the day, ensures a deep slumber. In the morning, we awake to this view… 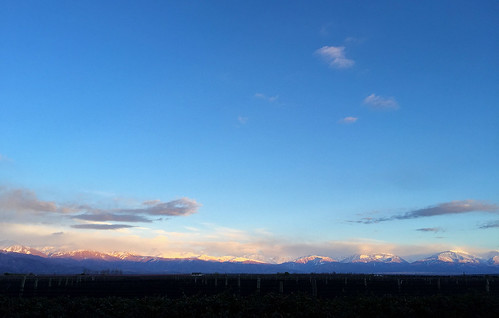 It’s not the greenest thing one can ever contemplate doing but we’ve decided to drive some 12-miles (20-km) south of Finca La Azul, just so we can get a little exercise! At the point where Ruta Provincial 89 meets Ruta Provincial 94, stands a giant holy cross. It’s where asphalt gives way to dirt and directly ahead of us lies Chile.

Ten-minutes into our run and we’re already out of breadth! I pull up the compass app on my phone and it reads ~5800-feet above MSL. What were we even thinking? Breakfast at La Azul sounds a lot more tempting… 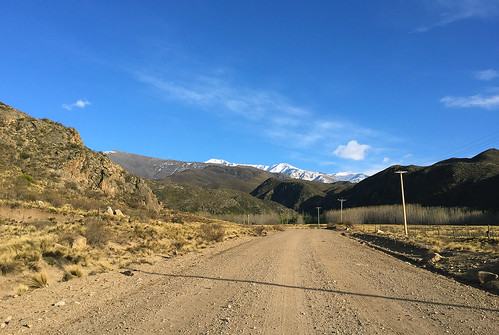 Domaine Bousquet, also in the Uco Valley, was set up in the late 90s to be the first producer of organic wines in Argentina. We’ve managed to get an English tour here, and as it happens we’re the only two people on it. Alana leads the tours in English and she turns out to be an excellent guide. Between discussing the nuances of malolactic fermentation with TM, talking us through the differences between French and American oak, and the limits to which wines can be aged, she’s also managed to give the group ahead of us a wide berth, allowing me unfettered access for photography. 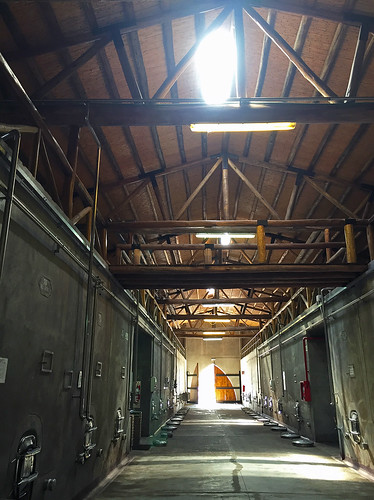 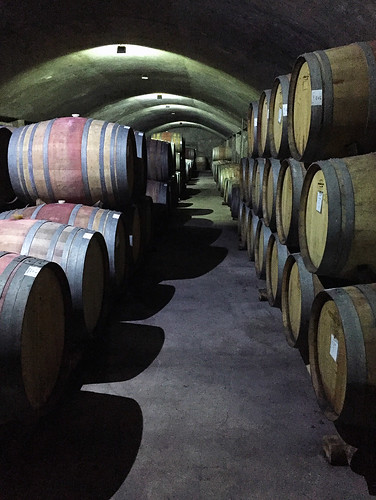 She deposits us some 90-minutes later at Domaine Bousquet‘s own restaurant, with quite the view. We choose to sit out on their deck, of course, and within minutes, a multi-course meal, and more wine-tasting ensues. That’s Sunday taken care of. 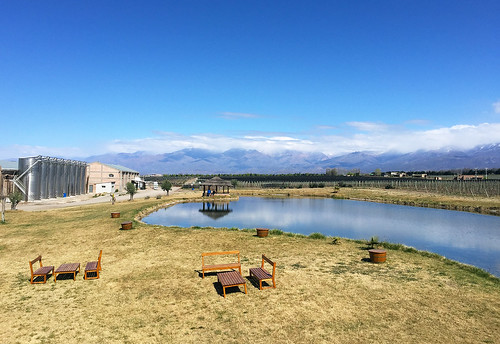 On a crisp Monday morning, as AR 2407 climbs high into the stratosphere, the elusive Mt. Aconcagua finally comes into view. Some day, in the not so distant future, I hope to be back in Mendoza to climb it… 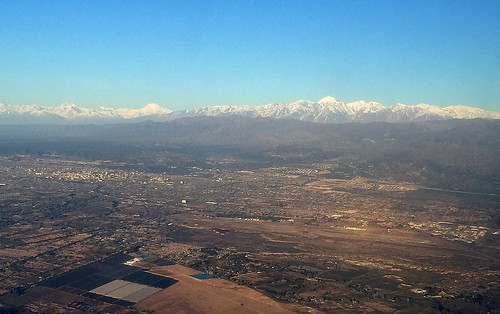 A full set of pics from my visit to Mendoza can be seen on my Flickr.

One thought on “Uco, the Valley of Goodness”