We’ve been in bumper-to-bumper traffic for the last mile or so, but the slow progress doesn’t bother me much. Cosme Velho is an attractive neighborhood; tree-lined streets, the occasional old mansion, and a vibrant street life. The slower speed also means I can pay close attention to the signs. A year plus of Spanish has definitely helped, and I can understand, with some degree of ease, a lot of the words I see. Speaking them out aloud though, is another matter altogether. My first stumbling block – asking my cab driver for change!

Most first-time visitors to Rio will end up going to Cosme Velho, if nothing else, than to get up to the storied Corcovado Mountain, home to the iconic statue of Christ the Redeemer.

It’s a short wait for me at the lower terminus of Trem do Corcovado, a rack railway that climbs to a height of 2329-feet or 710-meters. All of 25-minutes long, it’s a spectacular ride to the summit. But nothing, absolutely nothing – no amount of high-definition photos or 360° videos – can prepare you for the incredibly exhilarating views at Corcovado. Get past the hordes of selfie-seekers, claim your share of digital memories, and when that’s all done, pat yourself on the back for having made one of the best decisions of your life – visiting Rio. 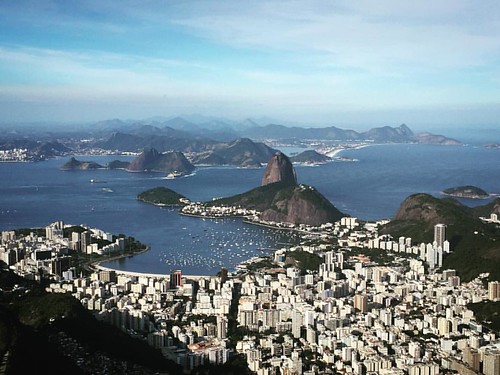 Choosing to stay in Catete has its dividends. Located between Centro (downtown) and the better known neighborhood of Flamengo, its on the direct subway route to all the major tourist spots; close enough to the water, and fairly safe. All while still maintaining a local feel. I certainly feel like one at Botecão do Catete, where the waitress puts down a chilled chopp even before I’ve received a menu or exchanged pleasantries. The grilled meat sandwich I order is flavorful; hot sauce is available in abundance, and the people watching is top shelf. 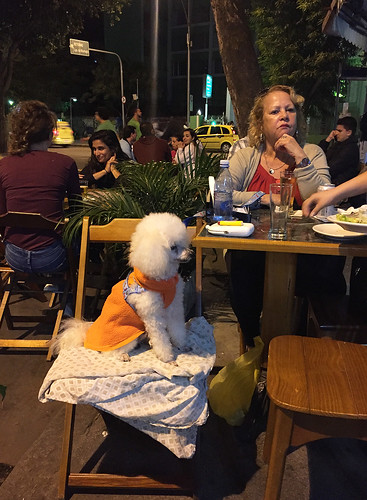 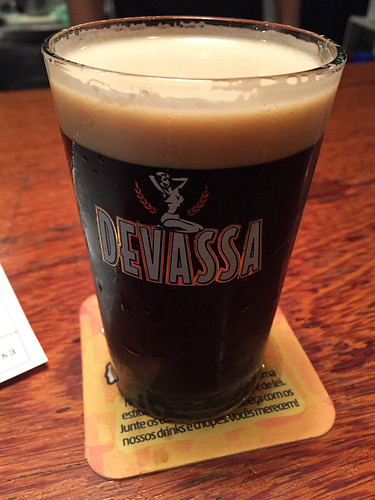 If Brahma or Itaipava are not your half-pints of choice (what chopp translates to essentially), local microbrewery Devassa, in neighboring Flamengo, pours a fairly respectable selection of Cervejas.

Saturday 9 AM, On the Flamengo trail

Flamengo Park, a short walk from my hotel, is a seemingly endless stretch of running and biking paths, bounded on one side by football and volleyball courts, with the ocean on the other. Coconut vendors have already set up on the beach by the time I’m done with my run, and I make a beeline for the first one in sight. It is some of the sweetest coconut water I’ve had in my life. It seems to be bottomless too, for at this point, I’m witnessing my second aircraft on final approach into Santos Dumont… 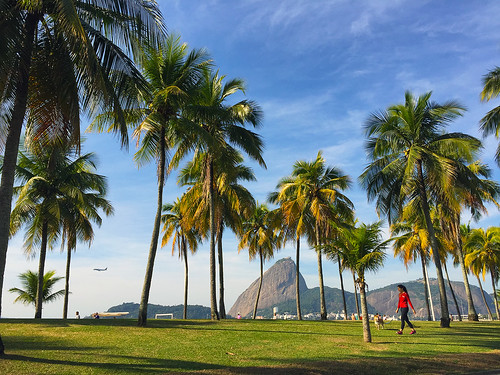 I make it back to the hotel with minutes to spare before breakfast service ends, but the wait staff at The Regina are ever-welcoming. The coffee’s still hot, the trays are all still in place, and a bounty of fruits and fresh juices await – mango, passion fruit and guava amongst them. This is, truly, a blessed land.

Rio’s Metropolitan Cathedral, located in Centro, is a modernist-style building that may not be to everyone’s liking. The Old Cathedral, however, will certainly appeal to a much broader audience, and is worth a quick peek inside, if only to marvel at its magnificent gilded woodwork.

The late 18th-century church flanks the west end of Praça XV de Novembro, an expansive public square named after Brazil’s Republic Day. A flea market in the center provides a worthy distraction for passers-by, while at the far end of the plaza, commuters stream in to the city center, their ferry having just arrived from one of many towns that lie across Guanabara Bay. Somewhere in between, off to the north side of the plaza, lies an easy-to-miss alleyway, Arco do Telles. I literally stumble upon it; a beautiful collection of colonial homes, connected by narrow cobble stone passages, where the Teles family once resided… 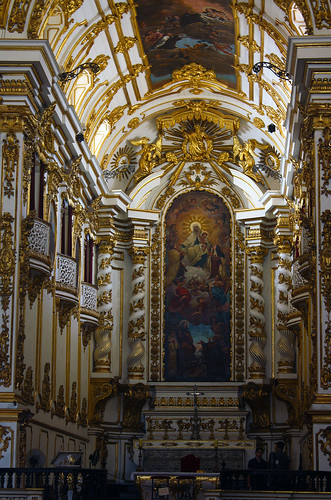 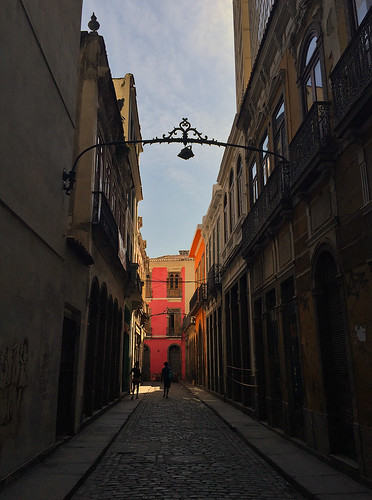 A couple of blocks away, in complete contrast to those relics of the 18th-century, I board a sleek new tram, akin to one you’d find in a European city. It is Rio’s latest transit offering, opened only a month prior, seemingly in time for the Olympics. Rides are free so there’s a fair amount of overcrowding, and it doesn’t go particularly far. Everyone is ordered off at Paradas dos Museos, literally, the two museums stop. To one side of the tracks, in what is essentially a revitalized part of Rio’s old port, lies Museu de Arte. On the other, straddling an entire shipping pier, Calatrava‘s fanciful, and rather aptly named, Museum of Tomorrow or Museu do Amanhã. 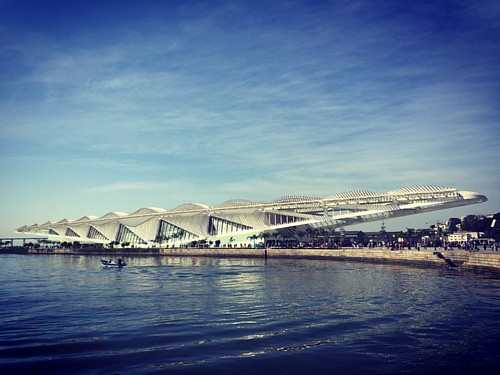 In the shadow of the Petrobras building, I join a serpentine queue, only to ride yet another tram. This tram’s history goes back to the late 19th-century though, and as is evident by the large number of tourists eager to ride it, the bonde, as its known here, is very much a part of the fabric of Santa Teresa, the neighborhood it serves.

Passing over the famous Arcos da Lapa, an 18th-century aqueduct that once supplied water to the city, we enter the hilly neighborhood of Santa Teresa. Opulent villas and grand old mansions – some kept up, a lot many in disrepair – line the narrow, winding and steep streets Santa Teresa is known for. At Largo dos Guimarães the tram comes to an abrupt stop. It’s as far as the bonde will go these days.

Regardless, it’s transported us into quite another world. A completely different vibe. A city within a city. Where bars and restaurants occupy crumbling old colonial edifices, the churchyard serves as a flea market, and eye-catching murals abound. Where the pace is decidedly slower, and the bonde still rules. Once the abode of Rio’s upper crust, and now the haunt of its artists and fashionistas, Santa Teresa is an absolute delight. 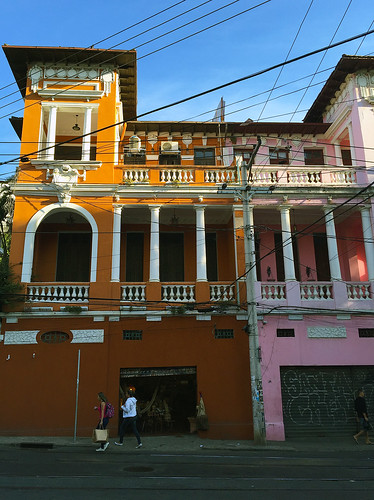 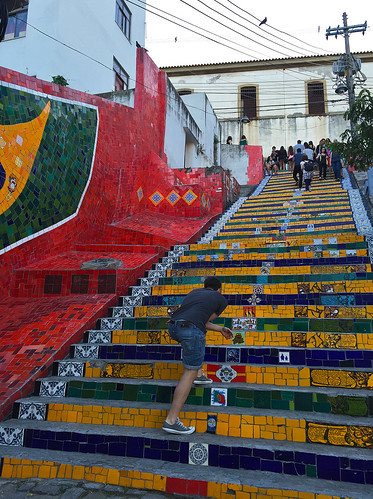 Its one thing to see Rio sprawled out beneath you by day, quite another to view it by night. So even though I’m strapped for time, I’ve decided to make it down to the neighborhood of Urca, to ride the cable cars up to the top of Sugarloaf. Judging by the long queues though, it seems everyone had the same idea. To be sure, this is a city of vistas, and even though the summit of Pão de Açúcar lies a good 1000-feet lower than Corcovado, the views from there are quite different.

For one, Sugarloaf sits at the head of a promontory, affording unparalleled views of Guanabara Bay. Second, it’s probably the best vantage from which to admire the sheer scale of the world-famous statue. By the time I make it up to the summit though, it’s going to be pitch dark. For now, the halfway point will do just fine…

They pour a pretty stiff one at Churrascaria Majórica, the traditional steakhouse in Flamengo. Eager to get my Caipirinha fix there, I hadn’t paid much attention to the menu and simply ordered the classic. Turns out, maracujá or passion fruit is the one to get. Good thing the barkeep at Rio Scenarium has a heavy hand too.

Popular with tourists and cariocas alike, Rio Scenarium, one of the most frequented nightspots in town, is located in Lapa, the city’s nightlife hub. The beautifully decorated three-storey venue pulses with activity practically any given night, a little more so when a Samba band shows up… 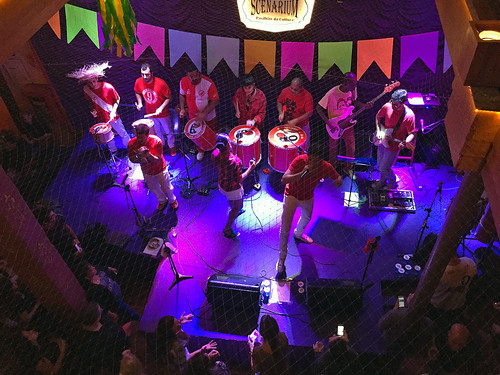 The real magic of Rio lies in its natural setting, no doubt. Rio’s harbor, one of the seven natural wonders of the world, was probably best described by Charles Darwin as being “some kind of immense theatrical stage.” But hidden from that dramatic coastline, and by extension, some of that spotlight too, is Floresta da Tijuca, the largest urban forest in the world – all of it man-made.

Taken up as a reclamation project in the late 19th-century, the lush tropical rainforest spans over 30-km², and is home to hundreds of species of plants and wildlife. Parts of it so dense that the ambient temperature is said to be a lot lower than surrounding areas. Good thing its right in the heart of the city, and its periphery, for most part, is accessible. Sitting in the shadow of Corcovado Mountain, in the Jardim Botânico neighborhood, is Parque Lage, a fabulous introduction to the sheer beauty that is Tijuca national forest. 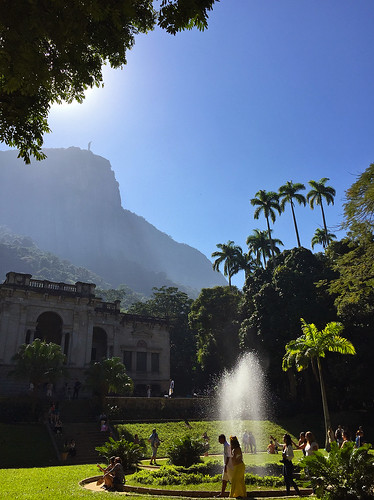 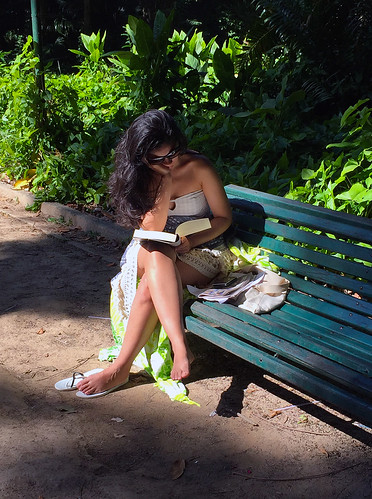 The Jardim Botânico neighborhood stretches to Lagoa Rodrigo de Freitas, a lagoon that will play host to the canoe, sprint and rowing events for the Rio Olympics. I make my way there for a walk along the promenade, and for another well-earned pit stop at a coconut vendor. At this point, I’ve made sufficient progress with my Portuguese to ask for that meaty white part, and the extra effort is well worth it.

Working my way back in the direction of Tijuca forest, I spot in the distance an imposing avenue of towering palm trees. It is the entrance to Rio’s botanical gardens, after which the entire neighborhood was named. Built over two centuries ago by the King of Portugal, as a test bed for spices brought in from the West Indies, it is now home to several thousand species of plants and trees – many of them endangered – in one of the most splendid settings ever. Ten reals get you in, and all 140 fabulous hectares are yours to wander through gleefully, and aimlessly… 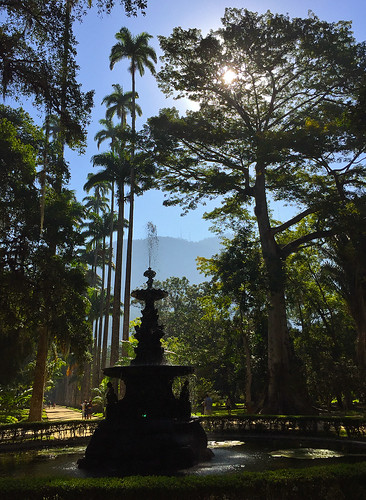 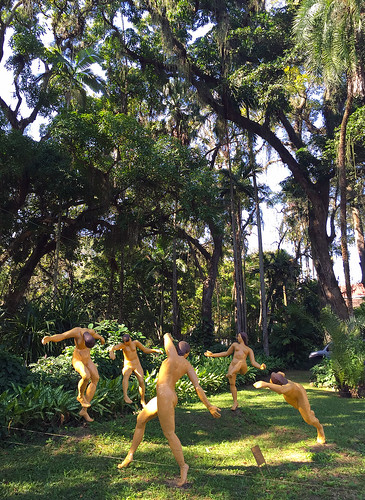 Copacabana, a name synonymous with Rio and its beach culture, actually owes its origins to somewhat distant, and completely landlocked, Bolivia. It all started with a humble chapel on a little promontory, one that held a replica of the Andean country’s patron saint, Virgin de Copacabana. That is, until 1908, when the Brazilian military decided to move in. The name stuck though, and the neighborhood, which was originally referred to by its Tupi name Sacopenapã, came to be known as Copacabana.

Over a century old, the impressive coastal defense fort, Forte de Copacabana, still holds its own today, canons et al.  The weaponry doesn’t fire any more, of course, but the military is still around, even if ceremoniously. The fort is now open to visitors and includes within it a little museum, a gallery, and two restaurants lining its very picturesque promenade. It is at one of these, Café 18 do Forte, that I’ve decided to have my last meal in Rio; take in those remarkable ocean views, and raise a toast to Our Lady of Copacabana… 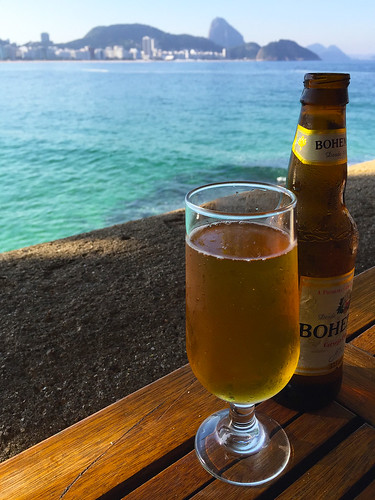 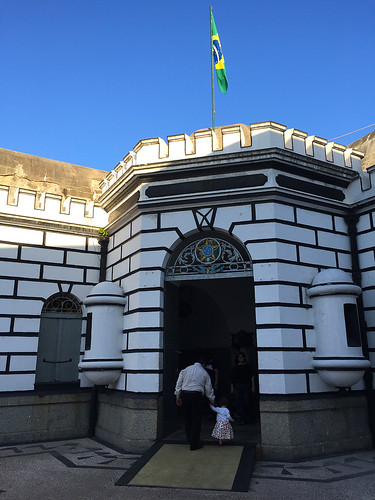 One Tupi name did stick around though. Ipanema. And in Tupi speak, it apparently meant “stinky lake”.  My sense of smell is not in the least bit offended though, as I saunter in there close to magic hour. If anything, it is one of the most striking spectacles I have ever witnessed at sundown. The tide moving in, bringing home with it the last few surfers and paddle-boarders. Several pick-up games of footvolley about to wrap, kicking up golden sand in their wake. In the distance, the magical twin peaks of Dois Irmãos, brilliantly silhouetted against the setting sun. Another glorious day coming to an end in Rio… 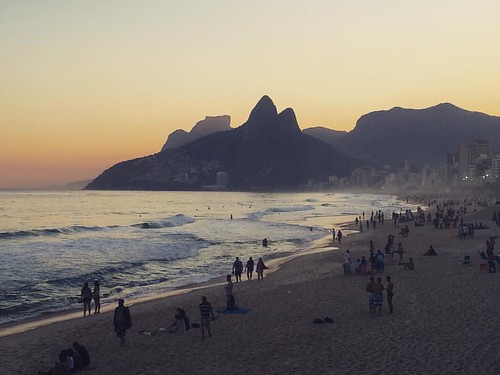 They say the best way to appreciate the city of Rio de Janeiro is by taking to the skies. As a result, helicopter tours are extremely popular here. They do come at a price though. So if you’re not willing to spend a pretty dime on those, you should hope your flight path lines up accordingly, as does your luck with seat assignments 😉 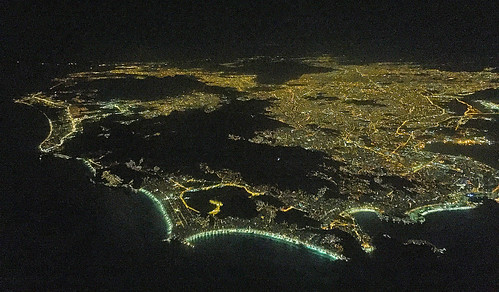 One thought on “Diário do Rio”