A blast of warm, salty air greets us as we step off the plane at Gustavo Rojas Pinilla International Airport. Breathing is suddenly a lot easier, and my track jacket feels quite redundant in 29C (84F) weather. After a night spent in Bogotá, San Andrés certainly feels like the sea change we needed.

Armando has already spotted us at the left-luggage area, and is quick to offer his services. We negotiate with him for 20,000 COP (~$7) for the 20-minute ride down to San Luis, a little village on the southeast of the island. Filing into his dated Chevrolet, we follow the coastal road south, past many colorful homes, a smattering of Baptist Churches, and several vendors hawking coconuts.

Buggies line the narrow lane leading to Donde Francesca, a popular seafood eatery located on San Luis‘s sprawling beach. Lunch hour is busy here, and aptly so. Far removed from the commercial hustle of the island’s main town, the food here is excellent, and the setting is hard to beat… 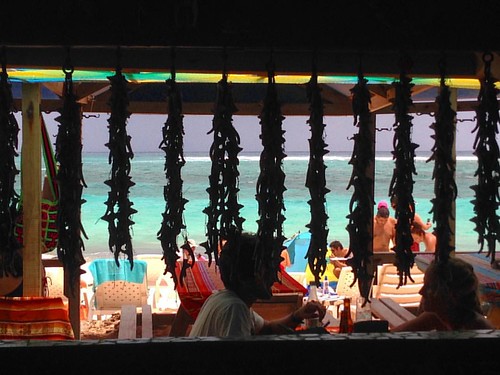 The gent who collected our boarding passes only minutes ago, now leads us out of the terminal building onto the tarmac. On it stands a tiny Beechcraft operated by Searca, a carrier few have heard of. As we take our seats in the somewhat cramped interiors of the 16-passenger aircraft, he joins us momentarily and proceeds to give us a flight safety demonstration. Moments later, our puddle jumper is airborne, for what is to be a 17-minute hop north, to the Caribbean island of Providencia. 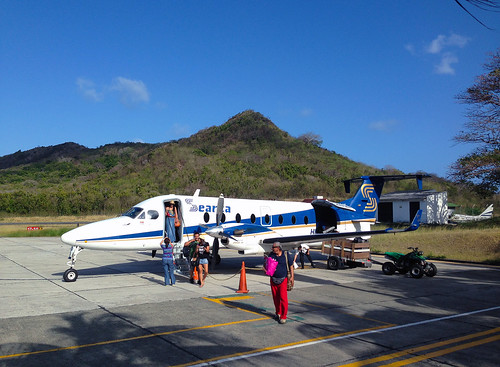 In an open verandah fronted by palm trees, a handful of passengers wait to board our plane back. Walking past them, we look around for signs pointing to baggage claim, but there’s nothing more than a wooden plank, on to which our bags would eventually be placed through a cavity in the wall. Outside, the taxi rank is made up of a half dozen pick-up trucks; their drivers huddled curbside, catching up on the days gossip. As relaxed as the scene might appear to someone who’s just landed, this is probably the busiest time of day on the island.

We are booked to stay at Cabañas Agua Dulce, a quaint little property named so after its location close to Bahía Agua Dulce or Fresh Water Bay. Across the road from the reception desk is an extension to the hotel – a west-facing terrace bar, overlooking the bay. Happy hour is still in progress as we saunter in, but more importantly, we’ve made it there in time for golden hour… 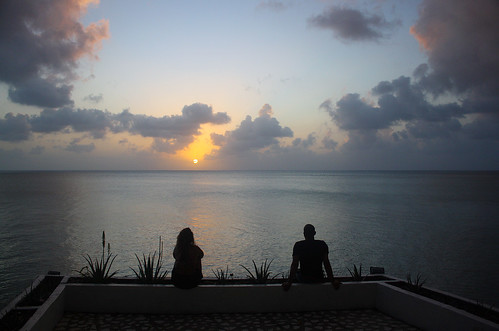 After breakfast, as we await Larry’s pick up truck, the heavens open up; the cloud burst bringing to life our lush tropical surrounds. As pretty as the sight is, we can’t help but feel a little anxious about the rest of our day. 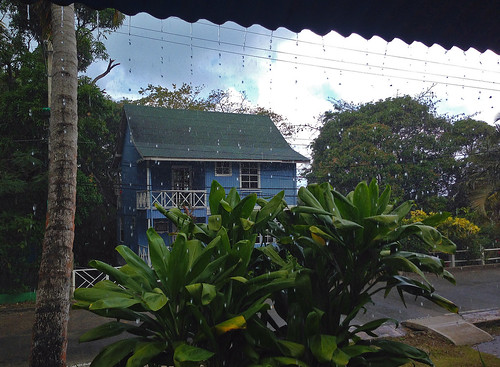 Further up the road though, there isn’t a hint of rain, and by the time Larry sets us down at Bahiá Maracaibo, it’s just as advertised – blue skies and a blazing overhead sun.

Maracaibo Bay, located on the northeastern tip of the island, is the gateway to Cayo Cangrejo or Crab Key, a little slice of paradise that juts out on the horizon, amongst a sea of tranquility. Literally. 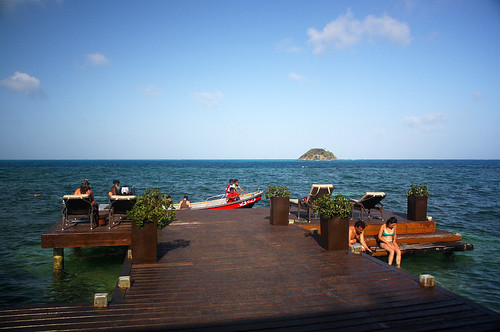 Deep Blue, the island’s only resort, has a well-appointed dock here, providing easy access to the cay. You can hire the services of a boatman, or simply rent a kayak and paddle away. On your return, consider cooling off with a cocktail. The coconut rum and lemonade one, in particular, is beautifully prepared at Deep Blue‘s bar and restaurant, located alongside the very scenic dock.

Crab Key sits roughly at the center of a 10 square kilometer area known as Old McBean Lagoon, a national park that includes within it a handful of little cays, mangrove forests, and a seabed full of marine grasses and stunning coral formations. 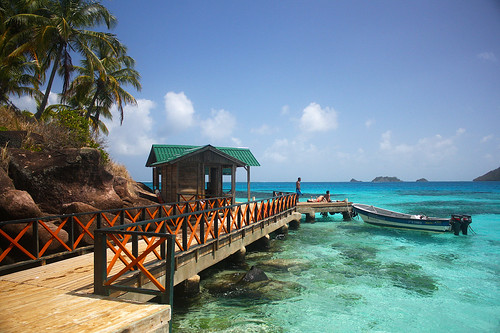 The archipelago here boasts the third largest reef in the world, so expect top of the line snorkeling and scuba diving. While the latter requires some advance planning (too much for us to bother with, anyway), snorkeling gear can easily be rented on Crab Key itself, from a little shack that doubles as a beverage and snack vendor, serving chilled cervezas, a palatable Piña Colada, and some delightful seafood empanadas.

No more than 2 hectares in size, Crab Key is home to a tropical dry forest, and a little path winds its way up to the highest point on the island, affording incredible 360 vistas of the surrounding lagoon. Once on top, it doesn’t take particularly long to realize why the waters around the cay are referred to as El Mar de los Siete Colores, or the Sea of Seven Colors. 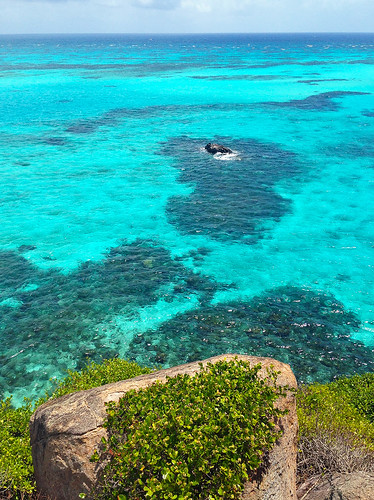 Larry, Selzel, Dundee and Thyme – some of the more illustrious gents who’ve ferried us around Providencia in their pick-up trucks. They’re part of a remarkably close-knit community here, with no one trying to undercut the other. But should you decide to be a little more independent, there are other ways of getting around too. Two-wheelers and buggies can be rented from a couple of agencies, both in Bahía Agua Dulce as well as the island’s main town, Santa Isabel.

A buggy makes good economical sense if there are more than two of you, and even after a day’s worth of driving, you’re unlikely to need more than a gallon’s worth of top up. The reason: Providencia‘s picturesque coastal road is all of 17-km (~10-miles) in length… 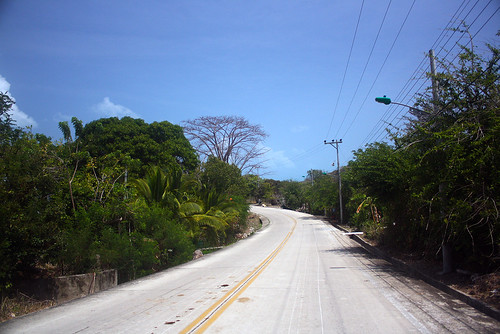 Few roads lead off the island’s sole highway, and when they do, they’re typically single lane affairs, just wide enough to string out a hammock. Still, its worth going off the beaten path from time to time. Chances are, you’ll probably end up at a sleepy fishing hamlet, or better still, a hidden beach.

The islands population has stood at the 5000-mark for a while now, made up mostly of the Raizal, an Afro-Caribbean ethnic group, who are a friendly and welcoming lot. They speak the sweetest of tongues, Patwa, an English-based Creole language commonly associated with Jamaica, and have no difficulty whatsoever sliding between that and Spanish, the latter imposed upon them by Colombia.

They’re always there to lend a helping hand, should you need one, but generally tend to keep to themselves. A game or two of dominoes is a preferred pastime on the island, and if they tire of that, they’ll eventually retire to the comfort of a hammock, lulled into a slumber as Reggae beats waft in from a nearby shack… 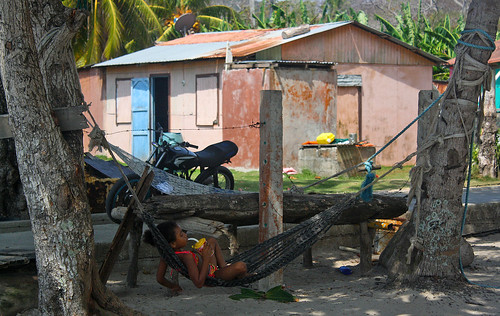 Meanwhile, back on the windy, undulating coastal road, idyllic overlooks are never in short supply. And you can take in those gorgeous hues of blue at leisure too. Never mind selfie-sticks, there are just not enough people on the island to contend with. 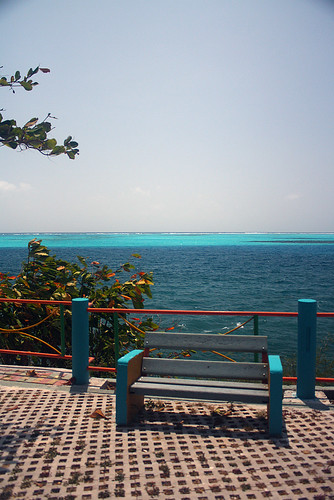 Santa Isabel, the only settlement of any size or significance in Providencia, lies on the island’s northwestern tip. A sleepy little town, it boasts the island’s only working ATM, a supermarket, and a surprisingly well kept Town Hall. It is also where the catamaran service from San Andrés calls at, rather infrequently. 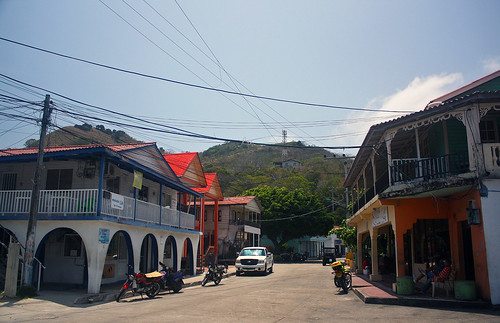 Most of the town’s activity is focused upon an attractive little pontoon bridge, known locally as Lovers Bridge. Despite the colorful name, it is in fact a lifeline to the 200-odd inhabitants of the neighboring island of Santa Catalina. And when the mercury soars, the perfect spot for locals to show off their diving skills… 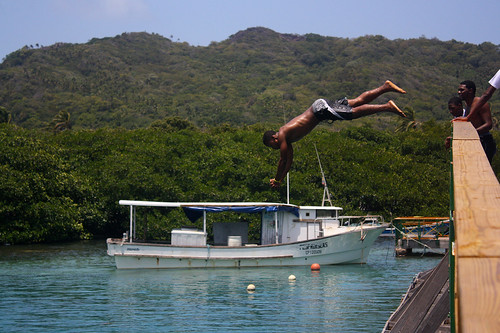 At the other end of the bridge, a group of men are deeply engrossed in a game of dominoes, while a stew cooks alongside on an open fire. On the promenade, there are more boats to be seen bobbing on the water, than people walking along it. After much ambling, we pass tourists #4 and 5 for the day. Santa Catalina, it seems, is even less frequented than its larger island neighbor.

“Ring the bell to be served” says the unassuming sign on a random palm tree. Below it, painted stones lead the way to Don Olivio, a restaurant run by a couple, in the patio of the very home they inhabit. Tips here go towards a boat they hope to own someday. That’s reason enough to go in there. But stay for the chilled tamarind juice, the fresh ceviche, the delicious carpaccio, and practically everything on their six-item strong menu. 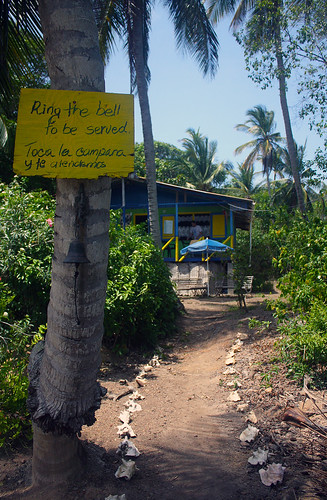 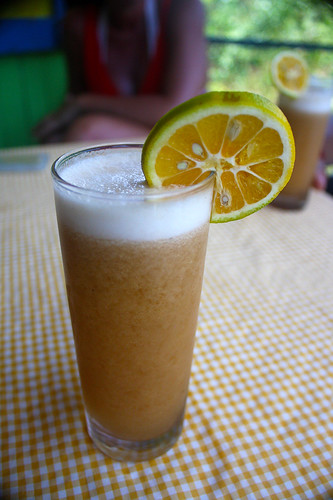 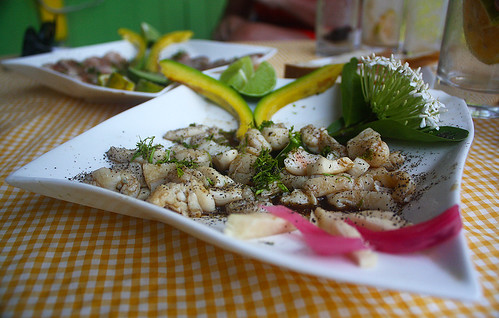 Santa Catalina‘s claim to fame goes back to the 17th-century, when Welsh pirate Henry Morgan used it as a base to launch raids on the Spanish. If folklore is to be believed, he fared rather well against them, for much of his treasure is reportedly still hidden deep within the island. Even if one were to discount those theories, remnants of his fortifications can still be seen, and thanks to Diageo, his namesake rum can always be savored. 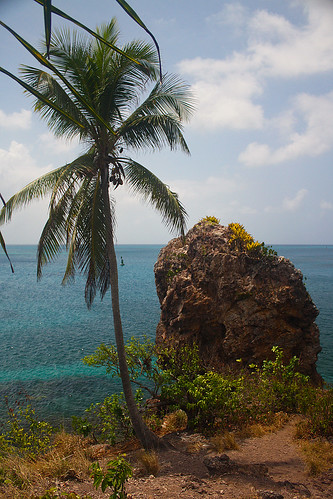 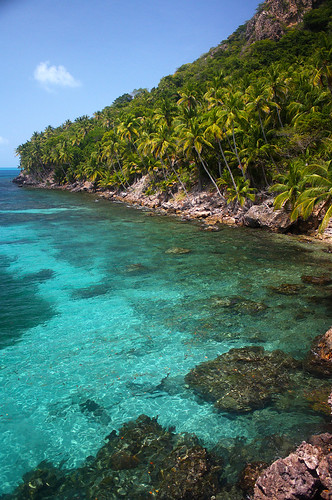 Undoubtedly, the islands most distinguishing feature is a large rocky outcrop that loosely resembles a human head; aptly christened Morgan’s Head. An undulating forest path leads you to the rock, but unfortunately, that’s not the ideal place to view it. You’re better off admiring its facial-like features from a boat or kayak. All is not lost though. If you don’t have a fear of heights, and don’t mind terribly treading barefoot on volcanic rock, then deep below, the ever-inviting Caribbean waters await… 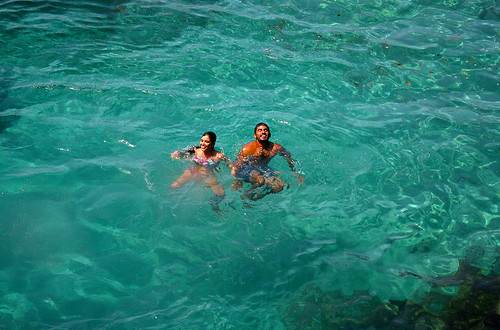 For those less inclined to such strenuous activity, a little beach, or playolita, lies at the other end of the trail, sitting under the shadow of one of Morgan’s old forts. For most part, this is a local haunt, but the few tourists who wander through are always welcome. Like on Crab Key, a little shack here does the trick, providing everything one would need for a day on the beach; snorkeling gear and Coco Locos included. The owners even have their own boat, offering local tours as well as a water taxi service back to your hotel. But as with everywhere else on the island, they’re almost bashful to advertise it. It’s the tranquilo philosophy at work here, and we’re not about to complain. 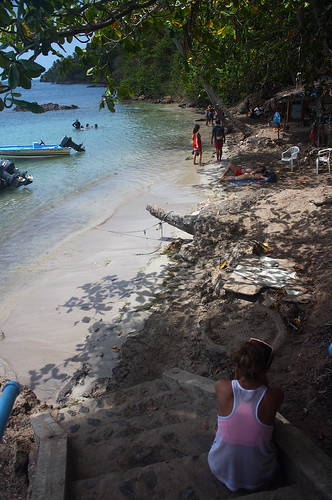 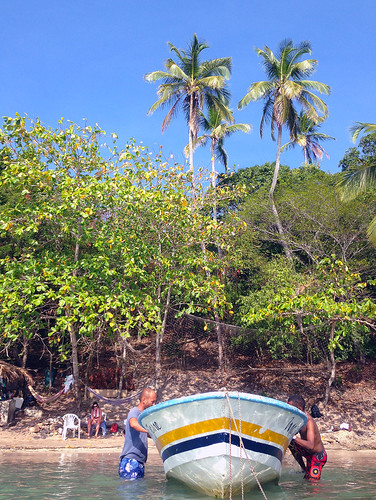 As beaches go, Santa Catalina would probably not be your first choice for sun and sand. There are plenty more though, scattered around the main island of Providencia, amongst them Playa Manzanillo and Bahiá Sur Oeste. The latter is the longest stretch of sand you’ll come across on the island, and also makes for a good lunch destination, as it boasts the largest collection of restaurants in a single location – a grand total of 3. 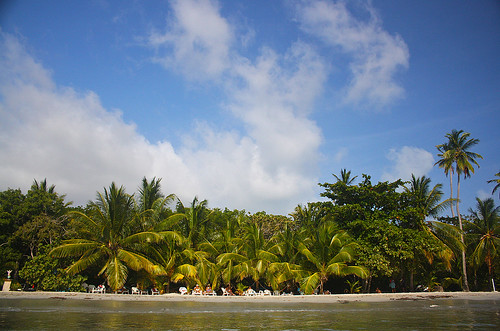 In peak season, you’re better off reserving ahead of time, or then you should expect a bit of a wait, especially so for dinner. And that’s not because the island is swarming with tourists. It’s because there are just a handful of restaurants to begin with. We’ve been steadily checking off each one during our time here, and so far none has been a disappointment. Its El Diviño Nino’s turn for lunch today, and by the looks of it, our overflowing platters of seafood will be just as fresh and flavorful as we’ve come to expect in Providencia… 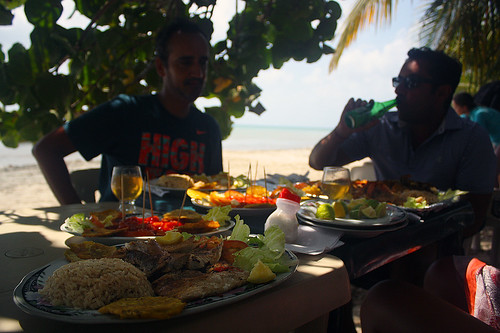 As the lunch crowds disperse, the afternoon calm descends on Playa Sur Oeste. Saturdays are typically reserved for horse races on the beach, and as we settle into our hammocks for the rest of the day, a steady procession of ponies is led to the starting line. From the looks of it, even they don’t seem to be in any kind of hurry… 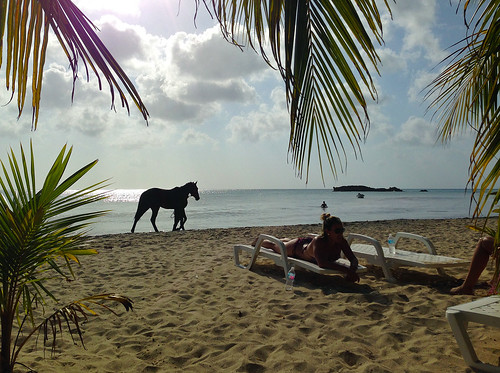 A full set of pics from my visit to San Andrés, Providencia and Santa Catalina can be seen here.

One thought on “Paraíso en Providencia”