The ‘A’ train offers the longest single ride (30 miles / 50 km) one can possibly take on New York’s humongous subway system. But most people have rarely ridden it past Howard Beach! With no beach to its credit, unfortunately, Howard Beach is better known for being the transit stop closest to JFK airport! Ride 7 stops further and you reach Far Rockaway – the eastern tip of Queens, bordering Nassau County in Long Island, and also the last stop on the ‘A’ train. 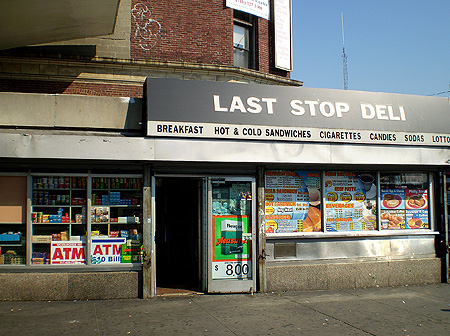 Welcome to ‘The Rockaways‘! Oft known as the ‘Playground of New York’, the Rockaways refer to the peninsula with a south west projection off Long Island. Once a popular resort area, it is mostly residential today with housing ranging in type from modern apartment blocks to old bungalows. Being a peninsula, it is surrounded by water on most sides – its south side forming a 10 mile long coast line along the Atlantic Ocean.

A lovely old wooden boardwalk runs about half this length and doubles as the perfect bike path – with a view to boot! 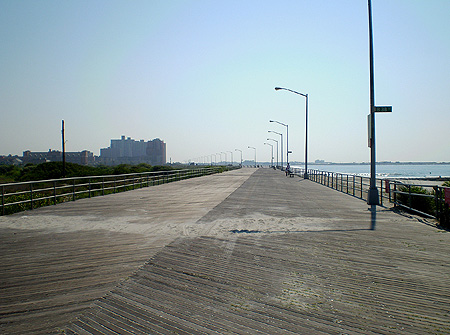 Rockaway beach is one of six beaches in NYC and not only is it the city’s longest but it also holds the distinction of being the largest urban beach in the United States! It finds favour with sunbathers, swimmers and surfers alike – being the only beach within city limits where that sport is legal! 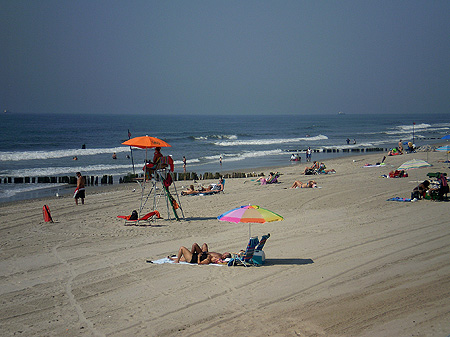 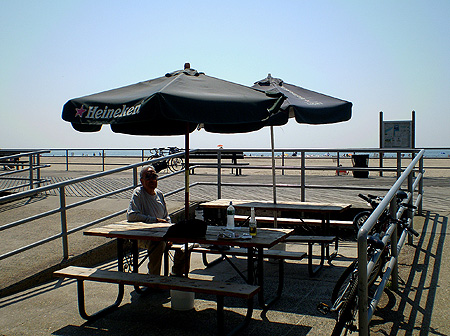 A few blocks from Sandbar is Rockaway Park station – the terminus of the western branch of the ‘A’ subway line also known as the Shuttle. A ten minute ride from there connects with the Far Rockaway Branch at Broad Channel where one can transfer to a through train for Manhattan.

Broad Channel is the only inhabited island in Jamaica Bay and lies approximately half way between the Queens mainland and Rockaway Peninsula. Expectedly so, the few miles of rail track through these parts is extremely scenic and offers great vistas of the bay on either side of the train. Closer to Broad Channel station, one can also spot the island’s characteristic houses on stilts! 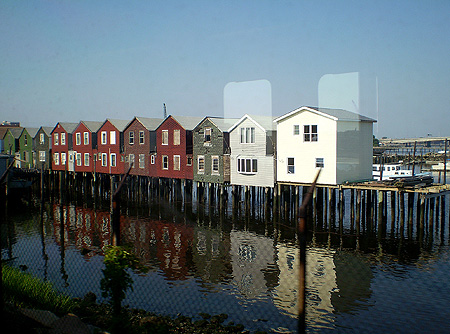 The Cross Bay Boulevard is the only thoroughfare through the island, intersecting twenty residential blocks, supporting a population of a couple of thousand people. A good proportion of them, close to the water’s edge, live in houses built on stilts and those more inland, occupy American style Bungalows – some just a little more quaint than the rest! 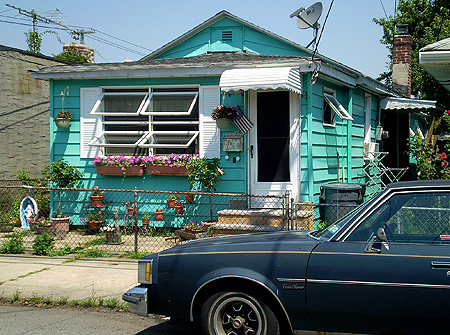 Broad Channel is also host to one of the city’s three surviving volunteer fire departments and the 108 year old engine house on Noel Rd is truly a relic from the past! 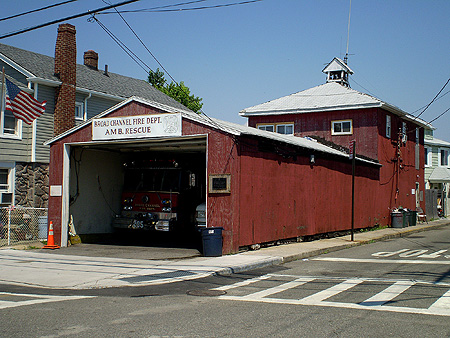 A wonderful greenway (bike path) follows the course of Cross Bay Blvd, running the length of the 3 mile long island or ‘Rulers Bar Hassock’ – Broad Channel being the inhabited southern portion of it. At the north end of it, where a bridge carries traffic across the bay, there is a lookout area on either side of the Boulevard. If you time it just right, you can view an ‘A’ train snaking over a viaduct, a flock of geese taking flight and an aircraft coming into land at nearby Kennedy. Unfortunately for me, there was no plane in sight! 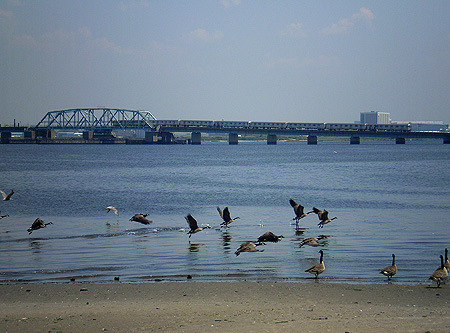 The Geese aren’t a mere coincidence here but one of over 300 bird species that can be found in the Jamaica Bay Wildlife Refuge – the largest bird sanctuary in the US Northeast and the best spot to observe migratory birds from! Hard to believe given that its all very much a part of the City! The Big Apple’s best kept secret, if you will.

Part of the Gateway National Recreation Area, the refuge lies in a tidal estuary spanning over 9000 acres of waterways, marshes, meadowlands, woods and freshwater ponds. The National Parks Service has a beautifully equipped visitor centre offering guided tours along numerous trails – one of which we passed along the way. 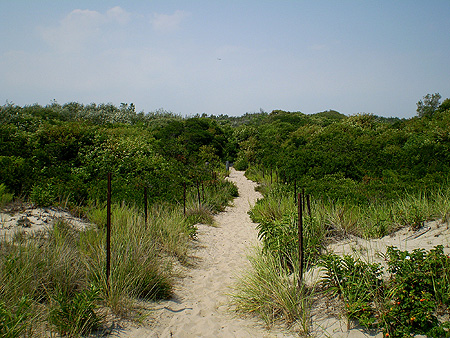 It looked terribly inviting for sure but also, rightfully, deserved a whole day – next summer hopefully!

Back on the peninsula, we rode out west towards Jacob Riis Park and Fort Tilden. While both are part of the Gateway National Recreation Area, Jacob Riis Park is built on the site of the former Rockaway Naval Air Station – best known for launching the first trans-Atlantic flight in 1919! Fort Tilden on the other hand, was a former US Army missile installation. Some buildings from the military era remain while the rest of the park is made up of playing fields and such. On the south side of the park is yet another long strip of beach. This one a lot more secluded than the peninsula’s main beach and only accessible by foot or better still by bike! 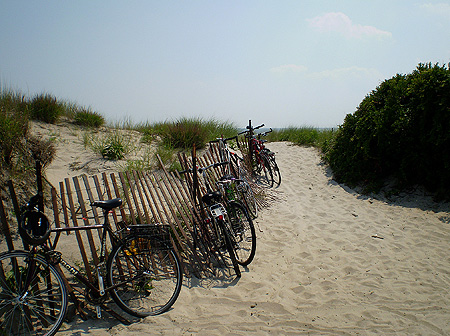 A bike path runs along the length of Jacob Riis Park, separated from the ocean by sand dunes. Occasionally, one gets a glimpse of the sea and more.. 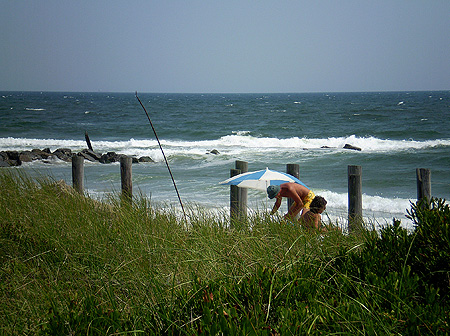 The beach at Jacob Riis Park is rumoured to be the only ‘clothing optional’ area (read nudist beach!) in all of NYC!

At the western end of Rockaway Peninsula is Breezy Point – a private gated community. Its summer residency is thrice as high as the rest of the year and with a population that is mostly Irish-American it is often nicknamed the “Irish Riviera”. Residents own all 500 acres of Breezy Point and are somewhat obsessed with their privacy and security! The guard at the entry gate made it clear that we were to ‘keep off’ the side streets! But with barriers guarding each entry, there was little we could do to disobey his orders! 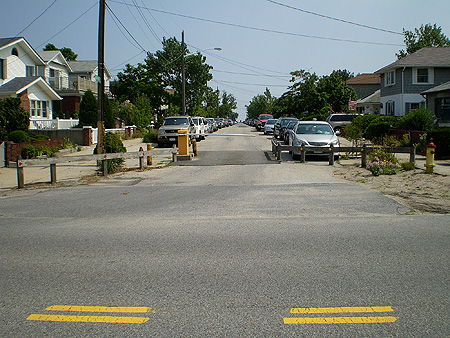 We did make a small detour though – to the central market at Breezy Point – where we parked our bikes sans locks (testimony to the ‘secure’ area we were in!) and took respite from the sun in the chilled confines of the local coffee shop. There ‘all day breakfast’ ensured that French toasts with fresh fruit on the side could still be ordered at a half past three in the afternoon and that was all washed down with easily the best chocolate milk shake I’ve had in all of NYC!

On the north side of Jacob Riis Park is Riis Landing – a former US Coast Guard station. Historic buildings – some still in dire need of restoration – remain on the site but the area itself has been repurposed today. The Parks Police is housed in one of the better preserved buildings; a new pier receives ferries from Manhattan and the old pier provides a perfect haven for anglers hoping to net a catch. The Gill Hodges Memorial Parkway Bridge – connecting the peninsula to Brooklyn – completes the picture by providing the perfect backdrop to it all. 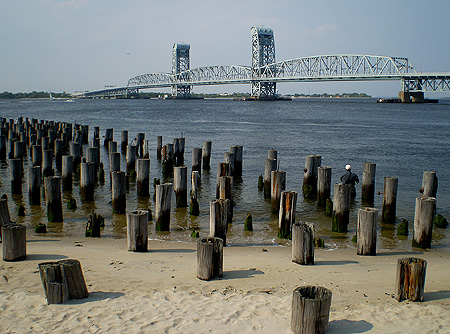 In May this year, the New York Water Taxi began a new ferry service between Manhattan’s Pier 11 (off Wall St) and Riis Landing in the Rockaways, with a stop in Brooklyn. The 60 minute long ride costs only 6 dollars and has been a boon to commuters on weekdays and made the Rockaways a lot more accessible to visitors on weekends. Our ferry – the ‘Half Day Fluke’ – had at least 20 bikes parked on its lower deck as we set sail for Manhattan!

The good views are almost all to your right as you head North West towards Manhattan – hugging the south Brooklyn coast line as you do so. Kingsborough Community College is the first big attraction on the way – not known for its architecture but for the fact that it has its own private beach! Next is Brighton Beach followed by Coney Island which had all its iconic rides silhouetted beautifully against the evening sun. 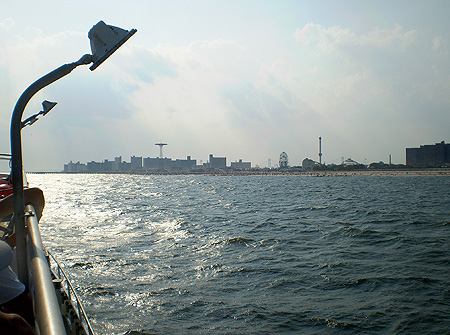 Brooklyn, not to be left behind, has its own private gated community – Sea Gate! A large Jewish settlement at the western end of Coney Island complete with private beach, cabanas, family homes and even a lighthouse! 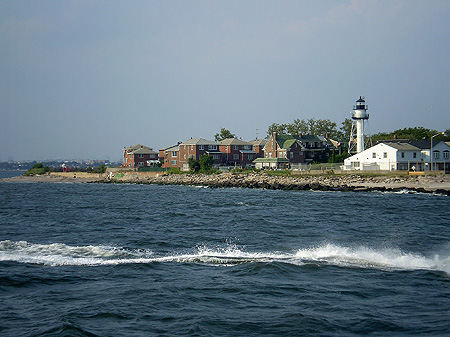 After passing under the mighty Verrazano Bridge (a first for me!), crossing three cruise liners (a first for me!) and stopping at the Brooklyn Army Terminal (another first..), Manhattan’s financial district was finally within sight – framed by the beautiful green foreground of Governor’s Island. 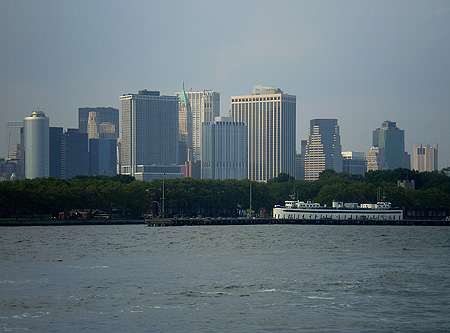 The historic boat being a part of the ‘City of Water Day‘ celebrations! And what better way of celebrating such a day than by visiting a peninsula, some beaches, an island, taking a long ferry ride and ending it all perfectly with the rare chance to view all four ‘Waterfall exhibits‘ on the East River! 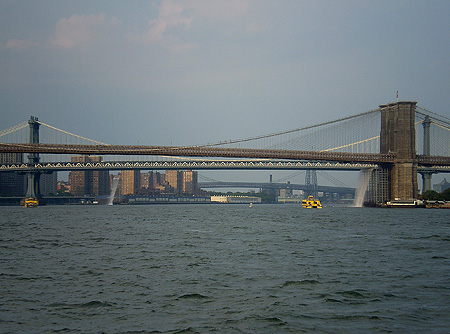 A full set of pics can be seen here.

Addendum: As a matter of coincidence, the NYT’s online edition carried this interesting article today.

2 thoughts on “How Far to Rock Away?”