One year on, quite a bit has changed in Vieques. Cellular service is a shade better. Electric supply is a lot less erratic. Street lights, where they exist, are now in working order. The Malecón has been patched up. Credit card acceptance has gone up considerably. Who would’ve thought, but ferry tickets can now be booked online. And the most prominent group visiting the island these days are young Chinese couples. Other than that, Vieques remains as laid back as ever. El Blok feels like a second home; Mojitos flowing at its ground floor bar, and sunset from its rooftop as remarkable as I can recall. 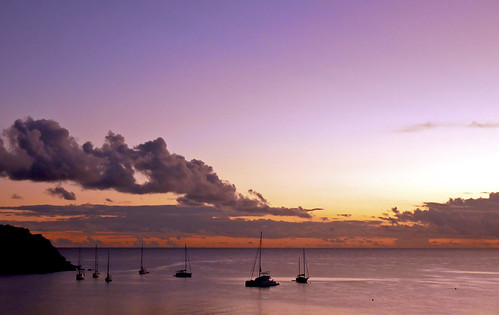 I’m actually back here thanks to the lunar calendar finally lining up with my plans to experience a bioluminescent bay. That, and the little fact that I fell in love with this island on my last visit.

Dinner done, we set off from El Malecón around 9 pm, and about 30-minutes later, our glass-bottomed kayaks are launched into Mosquito Bay, following the lead of nothing but a glow stick tethered to the back of our guide’s life jacket, into what, at first, feels like pitch darkness. But soon enough, our eyes adjust and our senses awake to one of the most ethereal experiences imaginable.

Up above, the stars are bright as can be, the milky way arching over us towards the horizon. And down below, the water brilliantly lit, with even the tiniest bit of movement – from our oars initially, then from our hands splashing away excitedly. Millions of tiny organisms emitting light, akin to fire flies in unison. Pure magic. And of course, impossible to capture, given my very limited repertoire in low-light photography. So I’ll leave you instead with this nifty little video sourced from the interwebs.

Antonio Rivera Rodríguez Airport in Vieques is more impressive by name than by size or operational ability, but its a familiar one nevertheless. And this evenings flight 4203 to Culebra, all of ten-minutes long, has only one passenger onboard – yours truly. This is, effectively, my first private flight, and at $40, a pretty good deal too. 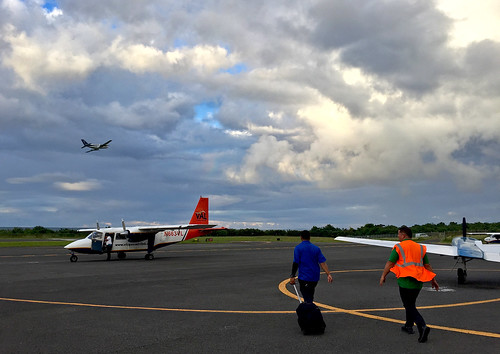 Naniqui by the Bay, where I’m staying in Culebra, is less than a five-minute walk from the airport, which really puts into perspective the tiny footprint of this island. Dewey, or Culebra Pueblo as its referred to locally, is the only settlement of any note here, and with a population of just under two thousand Culebrenses, it is the least populated municipality in all of Puerto Rico.

Under the glow of red street lights, I walk along Dewey‘s main drag towards Zaco’s Tacos. The popular establishment does a solid job on the Seared Tuna and Blackened Snapper varieties, and also makes a mean Margarita. Over one such beverage, I learn that the unusual color of those street lights make them friendly to nesting turtles (who are disoriented by other kinds of light), and also comply with a law aimed at minimizing light-pollution. ¡Salud! to that, I say. 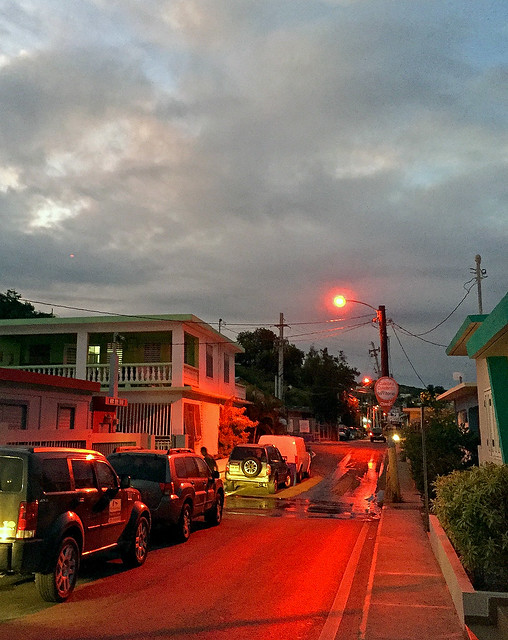 There’s a lone panadería in Dewey, but if you’re in the mood for a more conventional and savory start to the day, Blac Flamingo Coffee is, for the moment, the only breakfast game in town. I join a long line of stateside visitors eager to get their caffeine fix, and possibly some smashed Avocado on Toast, or whatever the equivalent here might be. The Scrambled Eggs on Sourdough is filling enough for me, and the coffee is particularly good. Setting out in my rental golf cart, I head east along the very scenic PR-250, one of two major routes that traverse the island of Culebra. I pull over soon enough to take this photo, appreciating all the while the kind of devastation a hurricane could bring to these parts. 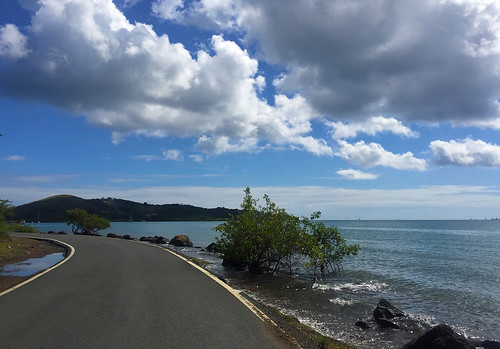 Museo Histórico de Culebra is a compact little museum documenting the history of Culebra, from the indigenous Taíno period, to the more recent infamy of US Naval occupation, and island life in-between. A worthy stop en route to the islands many beaches, it costs only a buck to visit, and is housed in one of the last surviving buildings from that hideous era – a former US Navy munitions warehouse dating from 1905.

Geographically speaking, Vieques and Culebra are a part of the Virgin Islands Archipelago, and together make up the Spanish Virgin Islands. Culebra, in fact, is closer to St. Thomas than the Puerto Rican mainland. On its eastern shore lies the incredibly picturesque Playa Zoni, a long strip of sun-kissed and virtually untrodden sand. St. Thomas is clearly visible from here, and at this point, the US Virgin Islands are a mere twelve-miles away. But they might as well be a world apart. 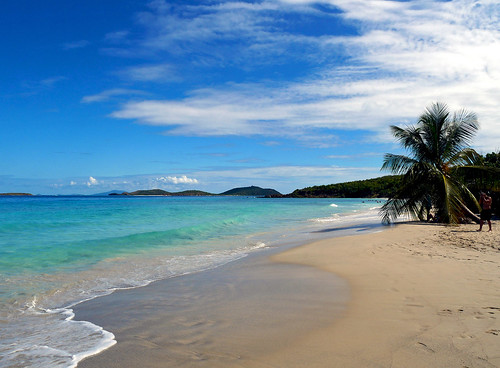 I break for lunch at Mamacita’s, something of an institution on the island, that’s part guest house, part bar and restaurant; it’s bright pink exterior setting the tone for the festive vibe within. The Bushwacker is the beverage to order here, apparently, but I stick to a Medalla for now, and proceed to study the menu, and life in the slow lane. Boats pass along the waterway connecting the inlet of Ensenada Honda to the ocean, some of them docking alongside the restaurant for a leisurely lunch stop, others pulling up at Culebra‘s only gas station, located across from us, that serves vehicles on one side and waterborne craft on the other. The service at the restaurant is about as unhurried as traffic on the water, and in keeping with that theme, I make it a long and lazy lunch.

Headed  in the opposite direction this time, I drive towards Playa Flamenco, located on the northwest of the island. A mile-long beach, nestled along a horseshoe-shaped bay, Playa Flamenco is easily the islands most written up, and expectedly, its most popular. Now as beaches go, this is a perfectly lovely beach, and has plenty of real estate to accommodate the many day-trippers from San Juan. But the truth is, Playa Zoni, and everything I’ve experienced on Vieques in the past, has spoiled me entirely. It doesn’t help that the waters at Playa Flamenco are far from calm this evening, and the threatening clouds are finally dispensing some rain. I begin retracing my steps to the parking lot. 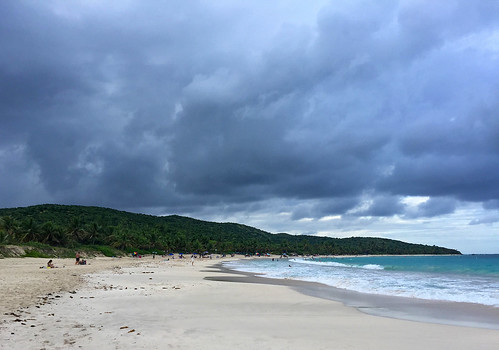 Finding the turn for Playa Tamarindo is hardly easy, and I end up driving a mile or so extra before determining I’ve overshot it entirely. Located a short distance from Flamenco beach, Playa Tamarindo has a western exposure, making it ideal for sunset watching. Its also known to have some great snorkeling, and the potential to view sea turtles. I don’t have any snorkeling gear with me, unfortunately, and I’m yet to come across any leatherbacks (this is not their nesting season, I learn later). Furthermore, the sunset, which I’m suitably positioned and well in time for, is far from dramatic, the cloud cover having put paid to that. But at least the beach is completely devoid of crowds this evening, and the solitude here is definitely one to savor.

For dinner, I head to Dinghy Dock, a bar and restaurant with a beachy, almost clubby vibe, facing the bay, on the other end of the waterway from Mamacita‘s. With only a handful of restaurants in Dewey, its understandably busy at this hour, but I secure a spot at the bar, and order Seared Tuna yet again, which everyone seems to get right in Culebra. Sipping on a Mojito and waiting for my food to arrive, it doesn’t take long to understand why the restaurant is named so. With their yachts anchored in the safe harbor of Ensenada Honda, its de rigueur for many a boat owner to arrive here in a little rubber dinghy, for a meal, a beverage, or both.

Up earlier than I’d like on my final morning, I pick up breakfast from Blac Flamingo Coffee, and head back to Playa Flamenco, hoping to arrive there before the hordes descend, and redeem myself from an oversight last evening. Following a spell of overnight rain though, the beach is barely recognizable this morning. If the choppy waters and strong swell aren’t giveaways already, there are rip current warnings in effect, and a lifeguard posted at the entrance. Swimming is off limits, of course, but one can walk along the notably shrunk footprint of the beach, if one wishes. I make it to the western end eventually, greeted by a rather surreal scene. Two kids are building sand castles, against the backdrop of a beached and heavily-rusted tank, one of two M4 Shermans left behind by the US Navy, as they made their hasty retreat from the island some four decades ago. 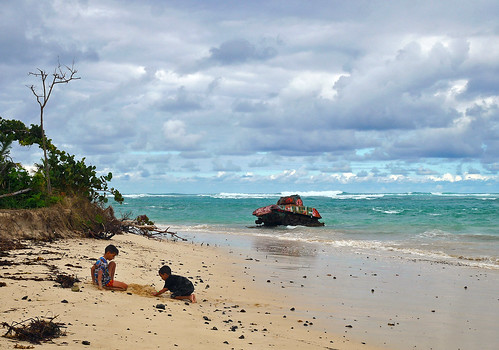 The sun is out by the time I pull up to the near empty parking area of Playa Sardinas, and conditions on the south shore couldn’t be more different. The beach closest to the settlement of Dewey, Playa Sardinas is, as I quickly discover, a highly underrated one. The only other visitor this morning – and its late morning by now – is donning his snorkeling gear, while a disinterested hen walks away from my viewfinder. Bahía de Sardinas, the tranquil bay from which the beach gets its name, beckons from a distance, and without any hesitation, I get right to it. 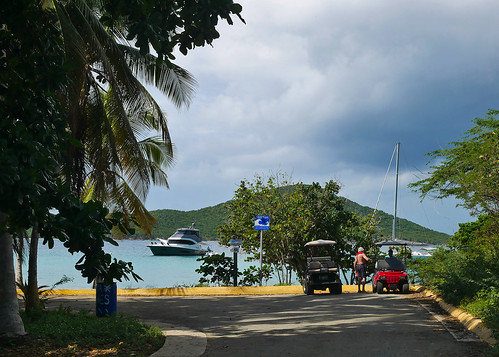 Punta Soldado or Soldiers Point is the southernmost tip of Culebra, and by island standards, getting there is a bit of a hike. In fact, the last stretch of road leading to its namesake beach is all downhill and unpaved, and rental companies on the island advise against venturing there in a golf cart. I pay very little heed to that, of course. From the parking area, a little boardwalk provides access to the beach, and picture-postcard views of Vieques in the distance. Strewn with rocks and pebbles, Playa Punta Soldado is not big on sand, but nonetheless boasts incredibly calm waters. My last dip in the Caribbean for now, it is an absolute joy. 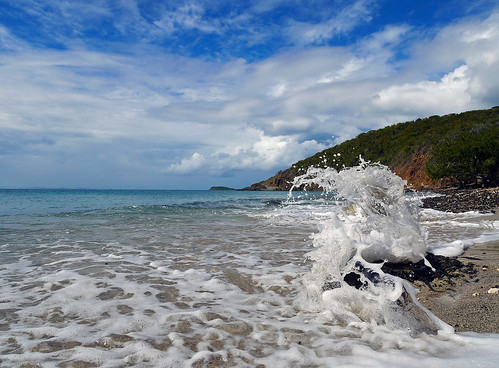 The best part? There’s nary a soul here. The island’s best kept secret? Perhaps. To celebrate the occasion, and toast my time in Culebra, I crack upon a Medalla. A few sips down, I inspect the can more closely. Quite fittingly, its a limited edition one, commemorating the 40th anniversary of the brewery, and bears a beautiful illustration of a mermaid by Alexis Díaz, one of Puerto Rico’s most recognized muralists. 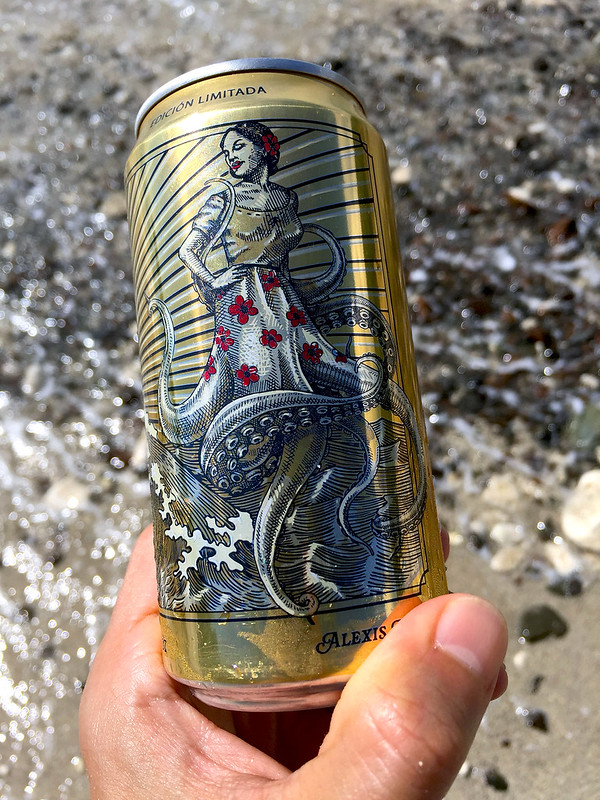 Its a short but thoroughly entertaining flight to San Juan’s Isla Grande Airport. Our eight seater BN-2 Islander has on its manifest this afternoon, two adorable four-legged passengers, and some stunning views below. My last visual of Culebra is Playa Tamarindo, its striking and humongous coral reef more than apparent from this vantage. I kick myself for not going there better prepared last evening. 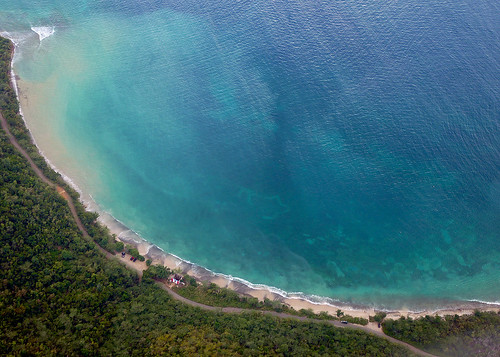 In the four years since my first visit, the culinary scene in San Juan has virtually exploded, capturing the hearts and minds of many a food critic, and catapulting it to worldwide acclaim. So on this visit to the city, I’ve planned ahead, and am a lot better prepared than I was on the sands of Culebra. For dinner this evening, I have reservations at Cocina Abierta, literally open kitchen, where Argentine chef Martin Louzao infuses global flavors into local Puerto Rican cuisine. And for now, a pit stop planned at Cuatro Sombras, a specialty coffee house that proudly sources its beans from the Yauco region of PR.

In between, I take a leisurely stroll through the old town, which remains one of the best preserved colonial centers I have ever visited; impressing me as much on this occasion as it did back in 2015. The walk ends at the western tip of the islet, as I watch the sun dip in spectacular fashion behind El Morro castle. My love affair with Puerto Rico though, will more than likely persist… 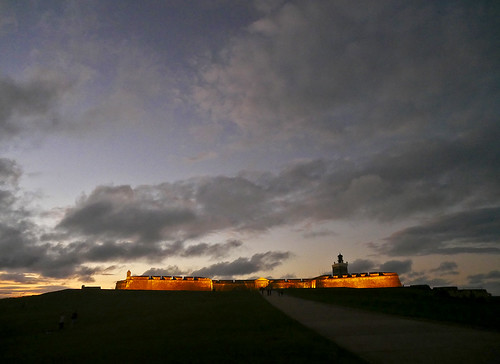 A full set of pics from my visit to Vieques, Culebra and San Juan can be seen on my Flickr.

2 thoughts on “Giving Thanks, in the Spanish Virgin Islands”