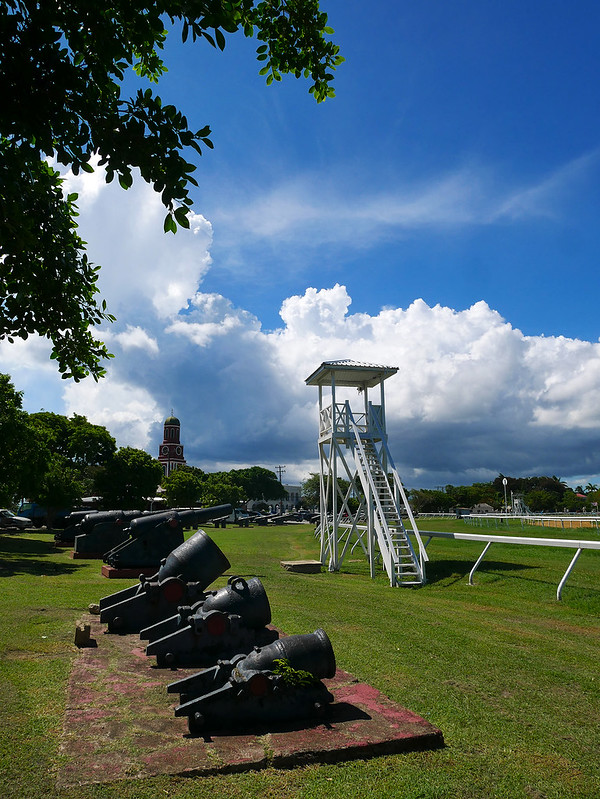 On the east end of the Garrison Savanah lies the Barbados Museum and Historical Society. Housed in a former jail complex, it’s worth the visit, if you can hack the plentiful supply of mosquitoes within. On the Savanah‘s western edge lies another, albeit smaller, museum; the historic home where George Washington stayed in 1751, on what was to be his only foray outside the United States. Tucked away in one stunning corner of that estate is Coffee Barbados Cafe, where I stopped once for an iced coffee and a cassava pone, and couldn’t help but return every other day. 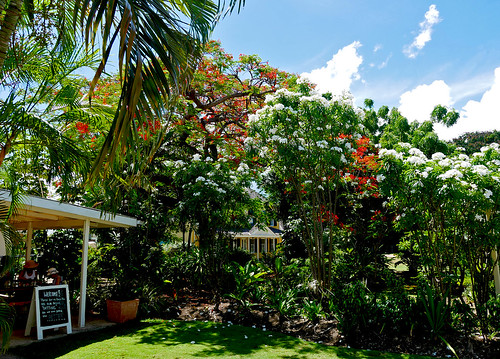 It gets written up a fair deal, and if you find yourself in the parking lot of Brownes Beach, that bright blue kiosk is hard to miss. Cuzz’s Fish Stand is something of an institution here, but also somewhat of an enigma, adhering to no schedule whatsoever. So if you happen to see a line of people there, join it. The Fish Cutter is the staple sandwich in Barbados, and that’s about the only thing this kiosk sells. Fried fish – typically flying fish or marlin – is cradled in Bajan salt bread, some token greens, and a generous serving of Bajan pepper sauce. A few bites and you’re done. Immensely satisfying, its addictive too – you’ll find yourself drawn to it even on the sultriest of days. 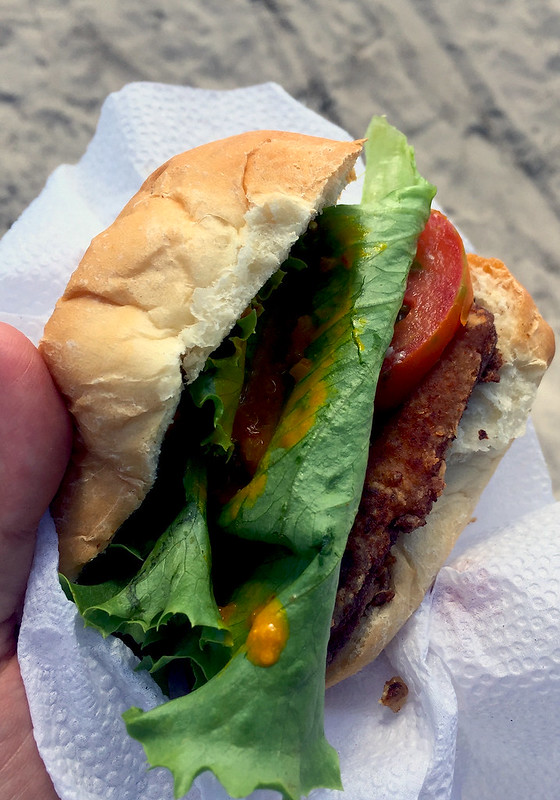 Its almost impossible to talk of Barbados’s history without mentioning its sugar industry. An industry that, for most part, owes its success to the community of Sephardic Jews who settled here in the mid 17th-century. Persecuted by the Portuguese, they came to Barbados by way of Recife, bringing with them the knowhow and expertise to cultivate sugarcane and run a plantation. In 1654 they set up a Jewish congregation in Bridgetown, the first such in the Americas. The Nidhe Israel Synagogue and Museum, and its accompanying cemetery, does a fantastic job of preserving that bit of Barbadian history, and showcasing the contributions the community made to the island nation. 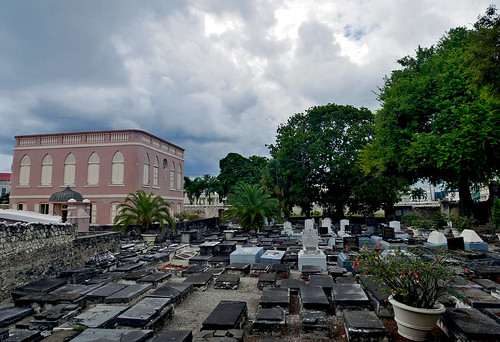 Bridgetown is the Capital of Barbados, and a fairly quick ride from Bayville to the center of town, on one of those ubiquitous ZR minibuses. One of four settlements on the island worthy of being called a town, Bridgetown is incredibly compact, with most, if not all of its points of interest, easily covered on foot in a matter of hours. At its core is a beautiful complex of late 19th-century neo-gothic buildings, housing both chambers of the Barbados Parliament. Fronting it, in an area that was till fairly recently referred to as Trafalgar Square, stands a statue of Admiral Lord Nelson. Easy to overlook, it actually predates Nelson’s Column in the British Capital by nearly three decades. 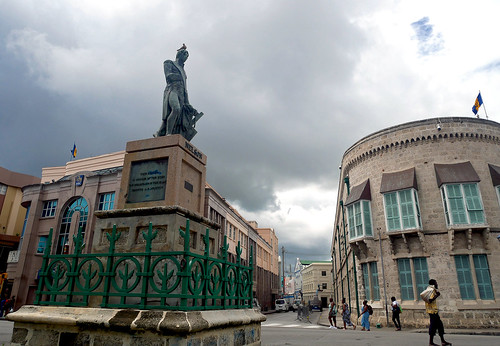 Behind the Houses of Parliament, things are a little more down to earth. A wholesale produce market sits on one side, and a lone shack selling hearty mid day meals lies across from it. I got there after the lunch crowd had had their fill, and all that was left was frizzle salt fish and mackerel gravy over rice and peas. That, and a side of cou-cou with steamed okra and carrots, all of which I sufficiently doused in Bajan hot sauce. For company in the adjoining patio, I had the laggards among the lunch bunch indulging in backslapping and rather unparliamentary language. That was probably the best meal on the island for me. 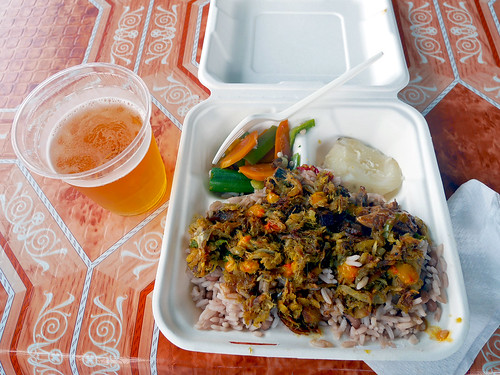 A hundred and forty six feet below

I’ve been on board a few submarines – some anchored at naval bases, others serving as museums on land – but never while they were actually underwater, doing what they were designed to do. So I jumped at the opportunity of going on one off the coast of Barbados. And given the relatively high prices of everything on the island, it was a steal too. Canadian-based Atlantis Submarines operates passenger submarines in a handful of Caribbean destinations, as well as in Hawaii and Guam, and Atlantis XV, a 48-passenger submarine, is one of ten in their fleet, providing undersea tours from Bridgetown. 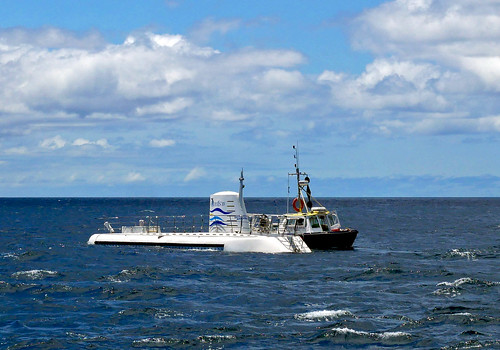 Once we made our initial dive, Atlantis XV remained underwater for almost an hour, reaching the very bottom of the ocean floor – almost 150-feet in this instance – gliding past brilliant coral formations and a thriving marine life, all accompanied by animated commentary from our fabulous two-man crew. We saw ship wrecks, old pipelines, unexpected detritus, and more. And then, ever so nonchalantly, a stunning Hawksbill Sea Turtle swam right past our portholes, leaving in its wake goosebumps, and a multitude of oohs and aahs… 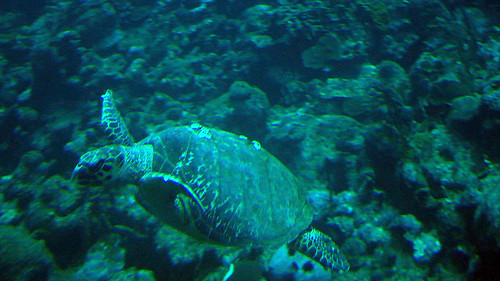 The point of going north

North Point in St.Lucy Parish, is, as the name suggests, the northernmost point in Barbados. Known for the islands only accessible sea cave, Animal Flower Cave, and a namesake restaurant, North Point is an hour or more from Bridgetown by road, and delightfully secluded as a result. The humongous sea caves are home to corals almost five hundred thousand years old, and tube-dwelling anemones found buried across the cave floor, from which the caves derive their name. Shurland or Bart as he’s known locally, leads the tours here, and if you get there early enough, you’ll not only get a personalized tour but also have the rock pools – whose transparency and stillness easily betray their true depth – all to yourself. 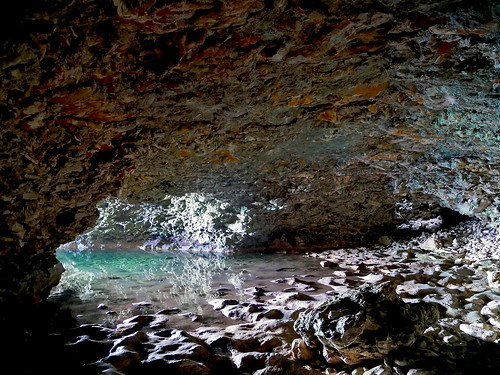 An Abbey in name only

Of the four rum distilleries that still operate in Barbados today, St. Nicholas Abbey never started of as one. Nor did it have any ties to the church. For almost three centuries, it served as a sugarcane plantation, with several different families occupying it during that time. Its present owner, local architect Larry Warren, swooped in about a decade ago to save this gem of a plantation from prying developers. Today, its part museum, part working distillery, with an estate that can only be described as bucolic paradise. A day at the Abbey will probably be one of your most well spent on the island, and it all begins in an authentic 17th-century Jacobean mansion, one of only three remaining in the Western Hemisphere. 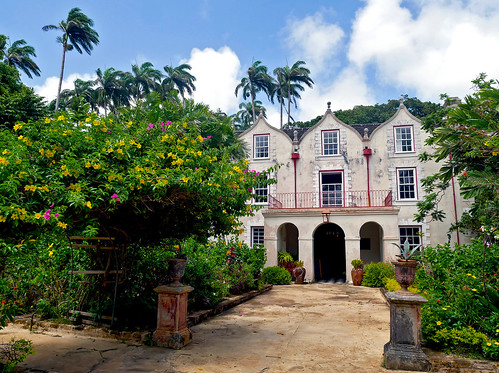 The rums of St. Nicholas Abbey, exported only to select markets, are as small batch as they get; made entirely from sugar cane, unlike molasses, the industry norm these days. And while sugar cane isn’t harvested at the plantation anymore, Larry has managed to preserve several relics from that era, including a late 19th-century steam mill, that’s still in working order. Another relic of the past he revived, and one that made a visit to the Abbey an easy sell for me, was the St. Nicholas Abbey Heritage Railway. Built from scratch, and steam operated, it is a true labor of love, bringing the railroad back to the island nation after 82 long years. 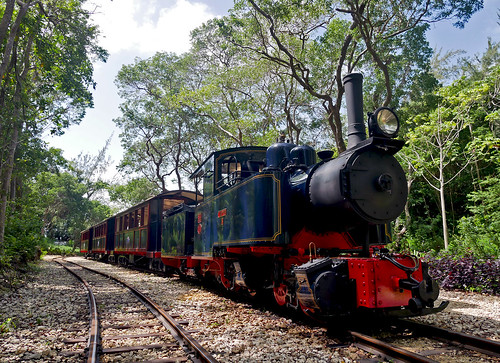 The District of Scotland

After a short but scenic run through the estate, the heritage railway terminates at Cherry Tree Hill, where the locomotive is turned around for the journey back to the plantation house. Passengers disembark at Cherry Tree Hill to take in sweeping vistas of Barbados’s rugged Atlantic coastline, and a highland-like area known as the Scotland District. Between 1881 and 1937, some distance along that rocky seashore, in the village of Belleplaine, a narrow gauge train would have started its journey, carting sugarcane across the island to the seaport at Bridgetown. 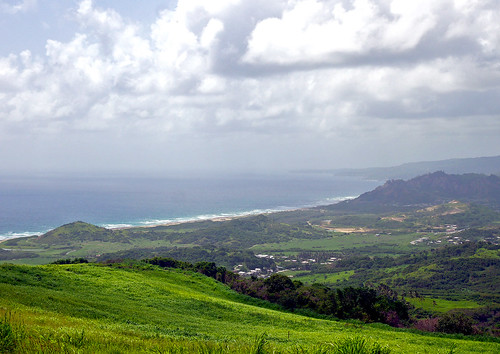 Down the road from Cherry Tree Hill lies the Morgan Lewis Windmill, the last sugar windmill to operate in Barbados, and one of only two working sugar windmills in the world. Built in 1727, and restored completely by the Barbados National Trust in ’99, it now serves as a museum, allowing visitors to climb to the very top, and observe up close the innards of this fascinating workhorse; one that powered the industrial revolution before the advent of the steam engine. Ralph is the caretaker here, and over a cup of coffee – which he promised was the best I’d get on the island – gave me a thorough rundown of the history of the sugar industry in Barbados, and how the Morgan Lewis Windmill came to be the last among over five hundred that once dotted the island. 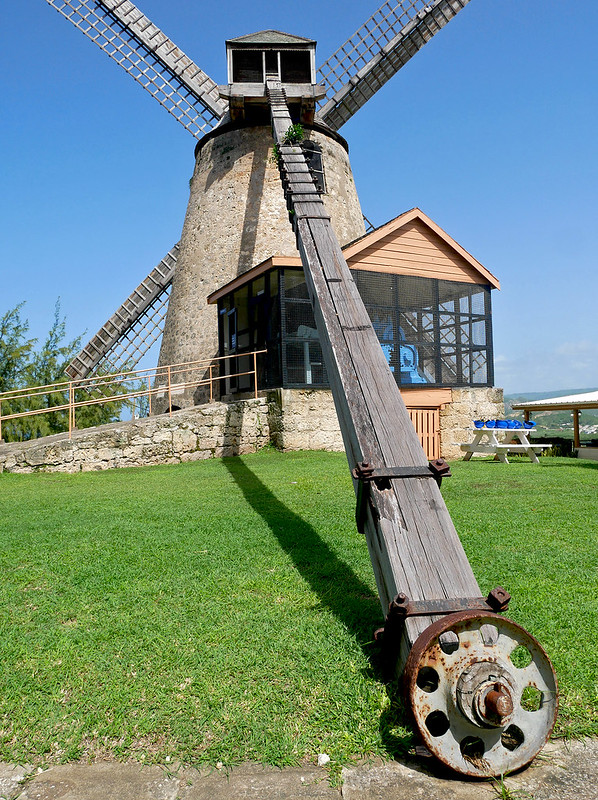 The most enchanting place on earth

The coffee he served definitely lived up to its name. Moreover, Ralph, like every other Barbadian I had encountered on this trip was exceptionally friendly, and he left me with a great tip, pointing me in the direction of Hunte’s Gardens, in the adjoining parish of St. Joseph.

The painstaking efforts of one man, horticulturist Anthony Hunte, the namesake botanic garden was created, beginning in the 1950s, out of an unusual sink-hole-like gully, and meant to be a recreation of a Caribbean forest. Its advertised as the most enchanting place on earth, and while I haven’t traveled nearly enough to back up that claim, it definitely is so in all of Barbados. If you end up going, budget at least a couple of hours in those salubrious environs, and stop by Anthony‘s ever-inviting and incredibly charming verandah, for a sundowner, and a conversation or two. 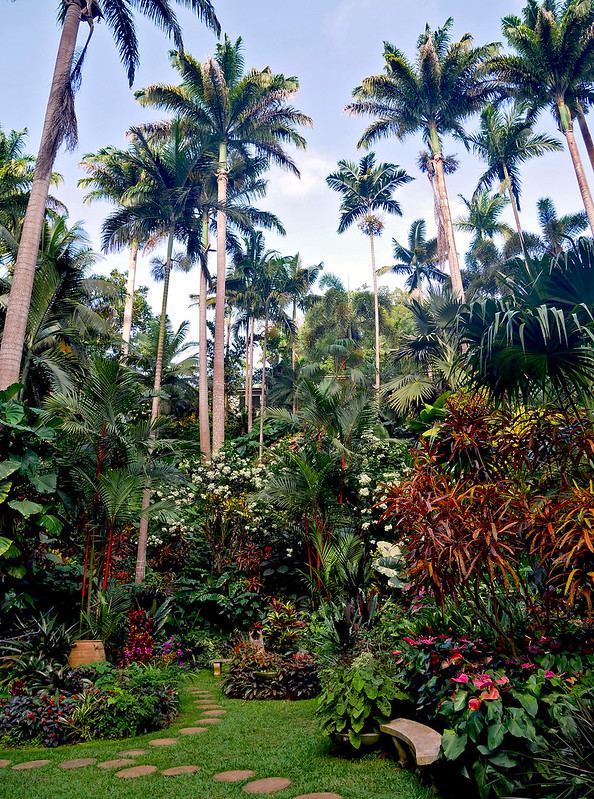 Fridays are for Fish Fry

On the southwest coast of Barbados, not far from where I was staying, is the fishing town of Oistins. Every Friday, Oistins plays host to locals and visitors alike, in what is quintessentially one big island party. Between the main road and the beach are sandwiched a few dozen vendors frying or grilling several varieties of fish, sourced from the adjoining fish market, and probably caught only hours prior. A flea market lines the waters edge, and everywhere in between are communal tables full of very content customers.  The aromas are intoxicating; the soundtrack – a mix of Calypso and Reggae beats – is hard not to move to, and the buzz in the air is unmistakably Bajan. If you happen to be there on a Friday, its an event not to be missed. In fact, I would go to the extent of saying, plan to be there on a Friday! 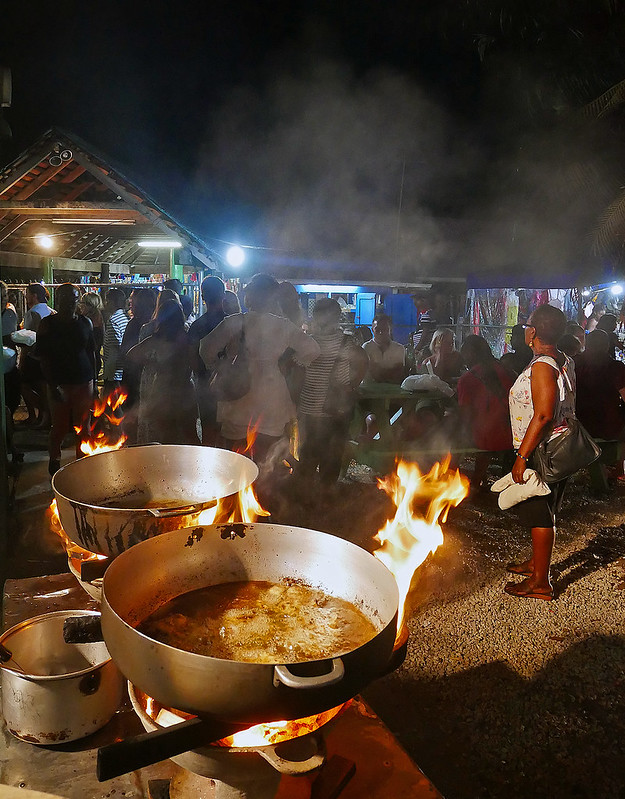 It would be remiss to end this post without even mentioning the utterly fabulous beaches this country has to offer. Granted I only visited a handful of the eighty beaches on the island, but every one of those was incredibly easy to get to, and each visit was immensely gratifying. From the pink sands of Crane Beach, to the generous footprint at Needhams Point, to the very secluded Mullins Beach, every dip, every sunset, and every aimless amble along boundless strips of sand became a lasting memory of Barbados for me. 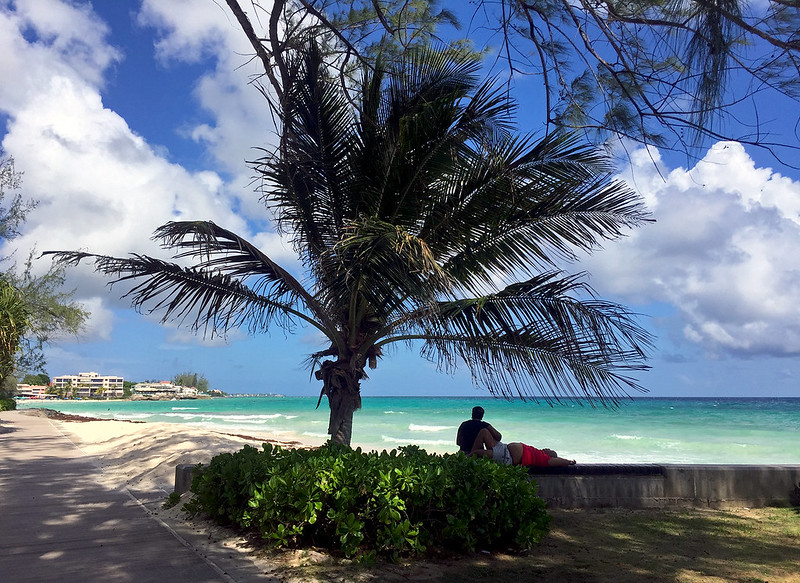 A full set of photos from my visit to Barbabos can be seen on my Flickr.

2 thoughts on “Basking in Barbados”