The traditional ceremonial scarf in Tibetan Buddhism, the khata symbolizes purity, and as a part of our welcome into Tibet, each of us is draped in one. Feeling like true VIPs, we file into a van and make our way from “New Lhasa”, where the station is located, to the old city. We’re booked to stay at the Gang-Gyan Hotel, a property owned by the family of the Panchen Lama, apparently. One look at it though, and the ownership credentials hardly matter, for this is a Tibetan-run establishment through and through. 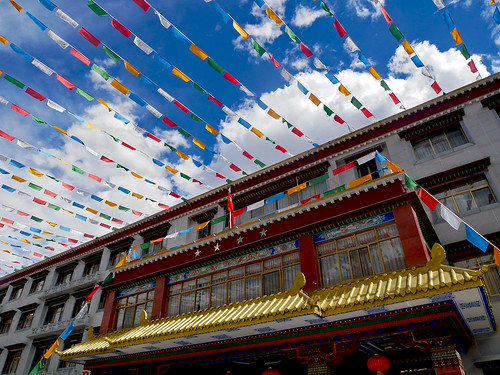 By the time we’re showered and ready to head out for dinner, it’s pouring outside. Thankfully, the restaurant we’ve been recommend is only a few doors down, and we make a dash for it. Like quite a few others in Lhasa, Third Eye is a Nepalese-run eatery, with plenty of vegetarian items on their menu, satisfying the cravings of a majority in our group. With plates wiped clean and many a satisfied tummy, we walk out an hour later, declaring it a winner. 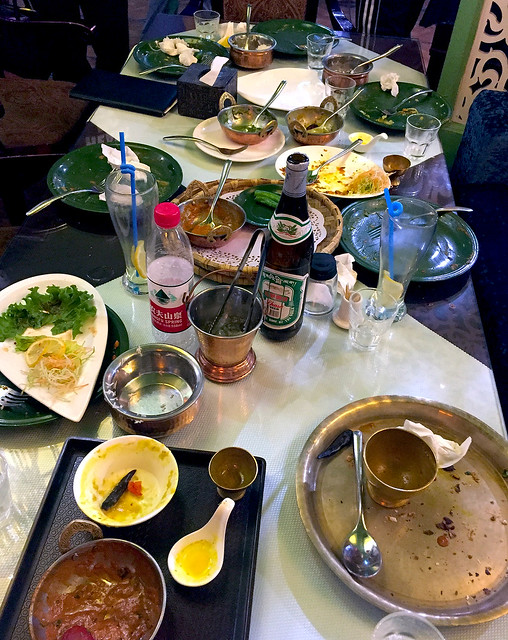 Another round of Diamox, and some Melatonin, got me through the night, and while the headache still lingers this morning, I’m fairly well rested. And like the rest of the group, raring to go. After breakfast at the Gang-Gyan, we make acquaintances with our guide, LT, and head out to pick up HV and PA, who arrived a day earlier, and are staying elsewhere. We’ll be reunited with HV momentarily, and also have PA join us for the first time, finally making our quorum of nine.

With everyone on board, we make our way south along the airport expressway, turning west onto a provincial road after crossing the Yarlung Tsangpo, only to stop a few miles further along the river’s south bank. Here, we haggle for handicrafts, take in views of the Xiazhulin Monastery perched on a bluff, and pay our respects to the Tsangpo, a river that would eventually flow into our native land as the Bhramaputra. 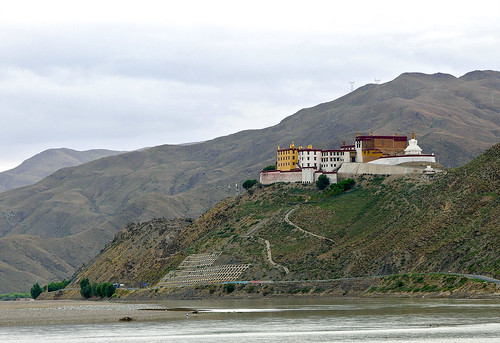 Continuing west along provincial road 307, we leave the river behind, climbing steadily into the mountains. A half hour after leaving waters edge, we pull up to an overlook. Its evidently a popular one, with plenty more handicraft vendors on hand, a few dolled up yaks, a handful of pimped out baby goats, and the star attraction amongst them all, larger-than-life Tibetan Mastiffs, on display. CNY 10 buys you a chance to pet and pose with these incredibly irresistible creatures, the moral dilemma of it all, guaranteed to haunt you for a while. 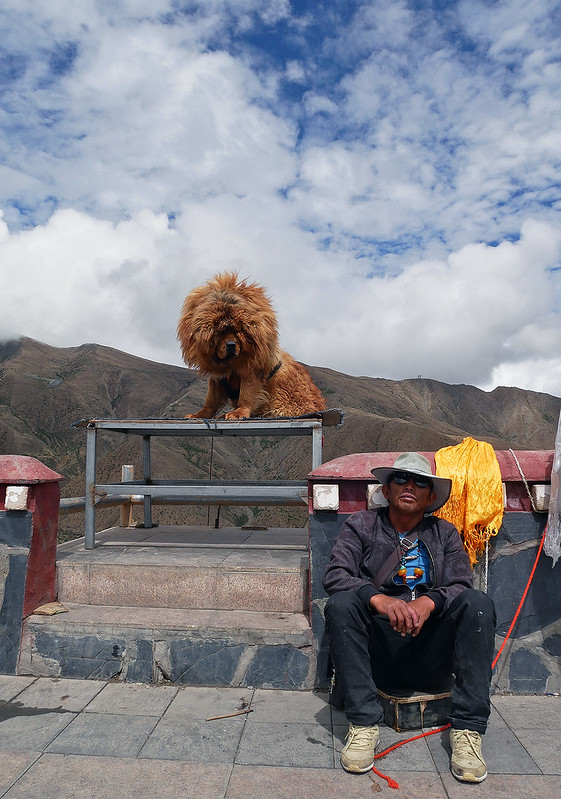 Part of the China – Nepal “Friendship Highway”, provincial road 307 connects Lhasa to Gyantse, the third largest town in the Tibet Autonomous Region, and the road is notable for its high mountain passes. The first of these, and our next stop, is Kamba La. At 4,998 meters or 16,398 feet above sea level, it is a little lower than Tanggula Station, on the Qinghai – Tibet Railway, but as far as we’re concerned, the highest altitude we’ll actually be stepping foot in. It also happens to have some spectacular views of the lake we’re headed towards. 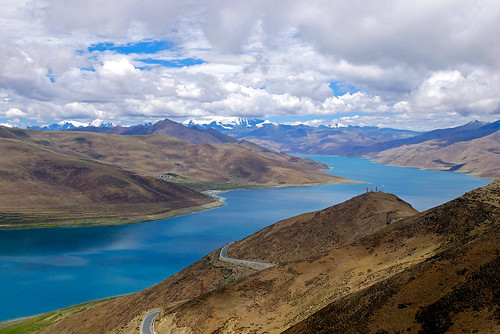 Lake Yamdrok, also known as Yamzho Yumco, is one of the three largest sacred lakes in Tibet – the other two being Namtso and Manasarovar – and as LT informs us, everyone from the Dalai Lama to the humble villager has paid homage to it at some point. But even if you’re not of the spiritual bent of mind, its crystal clear turquoise waters, and the unparalleled setting it lies within, will be sure to transfix you. 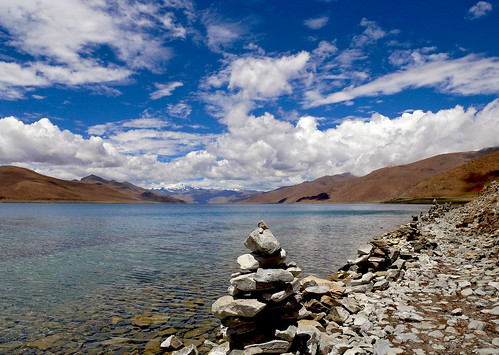 Forming a majestic backdrop to Yamdrok Lake is Mt. Noijin Kangsang, which caps out at 7,191 meters (23,593 feet), making it the highest peak of the Lhagoi Kangri Range, in the Tibet Autonomous Region. In the Asian context, it ranks a lowly 104 amongst the loftier Himalayan peaks, but on a global level, it sits almost a thousand feet higher than Aconcagua, the highest summit outside Asia. Perspective, if you ever needed one. 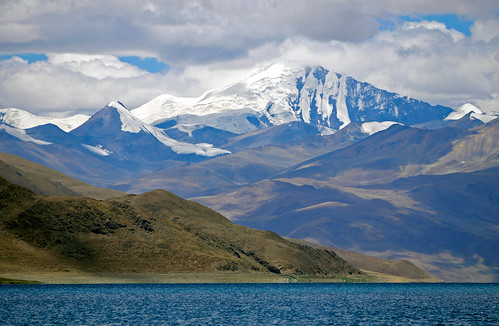 At one of the shacks lining the road by the lake, we have a late lunch of Tibetan noodle soup or Thenthuk, which is followed by a cup of tea made with yak milk. The latter, not to everyone’s liking. Then we begin making our way back towards the Capital. A little past 5 in the evening, we’re cruising down Beijing Road, the city’s longest and busiest east – west avenue, where our hotel is located.

A bustling four-lane affair, Beijing Road is lined with handsome two and three-storey stone buildings, sporting whitewashed facades, painted window frames, and prayer flags tethered to their roofs; the traditional architecture providing for storefronts on the street level, and residences above. With a vibrant street life, and a healthy dose of chaos, its reminiscent of some of the major urban thoroughfares in India. Just a whole lot cleaner, and chock full of surveillance cameras. 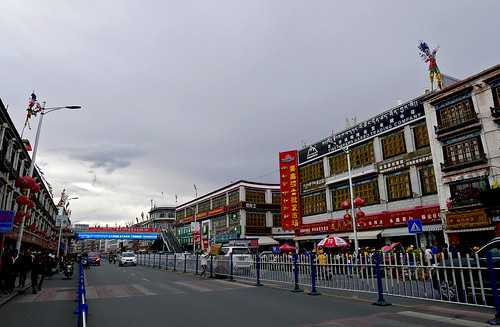 From our hotel, we take a leisurely walk along Beijing Road, then turn south on to Danjielin Road, an attractive street lined with restaurants, and shops selling local handicrafts and curios. There, we’re joined by LT and her daughter, for dinner at Lhasa Kitchen. On the menu this evening is shabaleb (fried bread stuffed with yak meat), shapta (fried yak), and some yak curry over rice. For DG, SK and me, at least, its a meat feast unlike any other, and by the time we’re done, we would’ve certainly had our fill of yak for a lifetime. 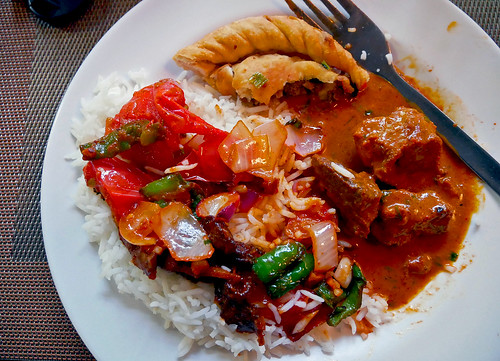 We emerge from Lhasa Kitchen almost two hours later, absolutely stuffed, and in unanimous agreement that at least some of those calories need to be worked off. The legendary Potala Palace lies about a mile away, and with an hour of light still remaining, we decide to walk there. With its buildings all beautifully illuminated, and street lanterns burning bright, Lhasa looks even prettier by night. It promises to be a very pleasant walk to the palace. 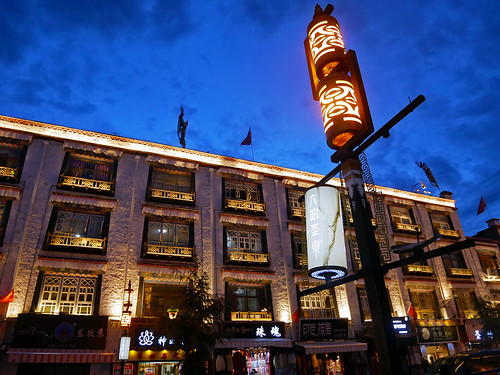 Considered one of the finest examples of the Dzong fortress style of architecture, the Potala Palace, perched high above Beijing Road, looks absolutely resplendent at twilight.  We’re not leaving Lhasa without visiting it, of course, but laying eyes on it for the first time is an experience we’re unlikely to forget – our decision to walk here, having paid off handsomely. 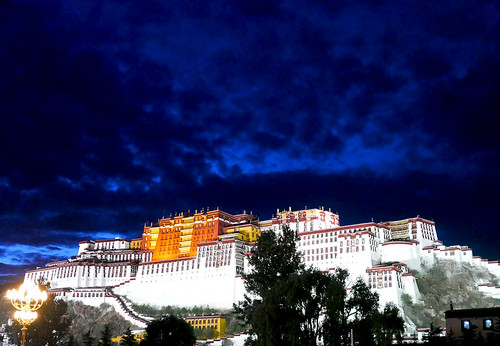 Between the Gang-Gyan Hotel and Potala Palace lies the subdistrict of Barkhor, a network of narrow pedestrian streets and alleyways, centered upon a namesake square and the storied Jokhang Monastery. Devoid of automobiles, but well supplied with locals and pilgrims alike, it has an unmistakable vibe to it. A fascinating segue into the old city, its the perfect start to our second morning in Lhasa. 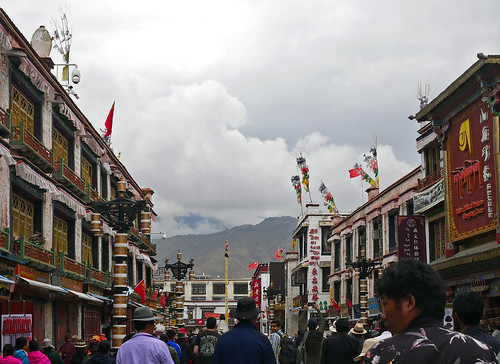 Pilgrims in traditional attire walk a fixed route around Barkhor, eventually encircling the monastery. A handful of incense burners or sangkangs dot the periphery, all of them constantly lit to please the gods protecting Jokhang. Devotees offer prayers at little shrines. The most ardent amongst them, prostrate all the way to the front gate. All around us, there’s an air of devotion that’s hard to ignore, and we’re yet to enter the temple. 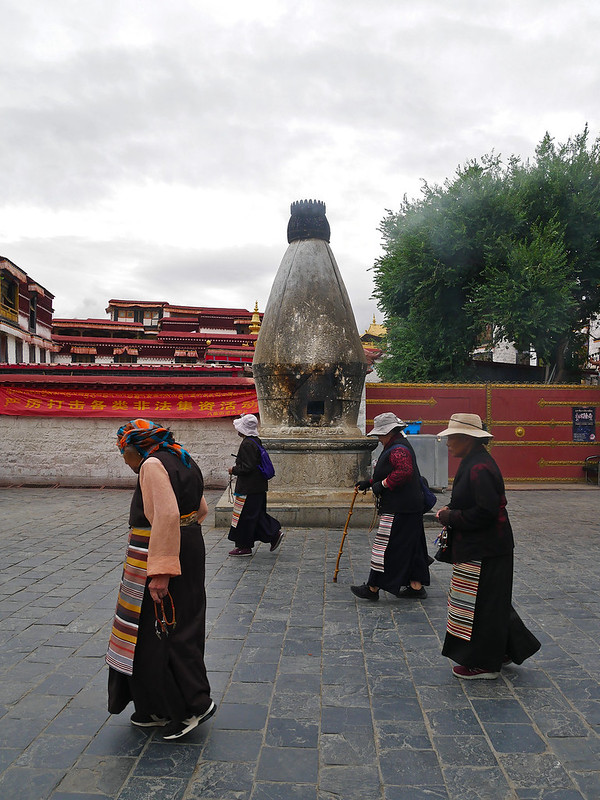 And its not for nothing. Tibetan Buddhists consider Jokhang to be the most sacred amongst their holy sites, LT informs us, as we gather around her in the temple courtyard. The temple was founded by Songtsen Gampo, she goes on to explain, the gent credited with bringing Buddhism to Tibet in the 7th century. It was built for his two brides, one each from China and Nepal, and to this day its main entrance faces west, as a nod to the latter.

Inside, devotees jostle for space with monks, going from one shrine to the next, generously plying votive candles with yak butter, bowing in reverence ever so often, and prostrating, when the space allows for it. The aroma of incense and juniper fills the air, and the staccato rhythm of shuffling feet and collective chanting provides the soundtrack. All of it contributing to a heady mix.

Photography is obviously not allowed within, and wouldn’t do justice to the experience in any case, so we have to make do with the exteriors. Dating from 652 AD and built primarily of wood and stone, the monastery complex is hardly unimpressive. Boasting gilded roofs, ornate balconies and decorated pavilions, its nothing shy of a visual spectacle. Somewhere in the distance though, but never out of sight, a Chinese flag flutters rather obstinately. 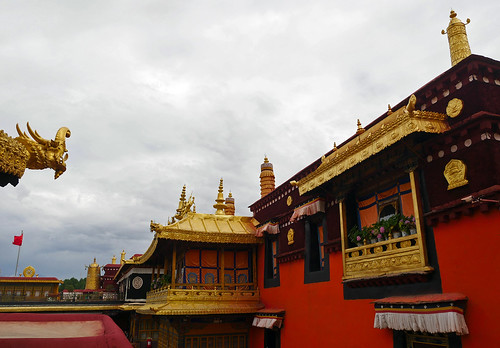 Built in 1649, the Potala Palace has served as the seat of the Tibetan government, and the winter residence for a succession of Dalai Lamas, over three centuries. Till 1959 i.e., the year of the Tibetan Uprising, and subsequent exile of the 14th and current Dalai Lama. Built atop Marpo Ri or the “Red Hill”, it not only serves as an iconic landmark for the city, but also as a beacon of hope to many. Hope that someday their spiritual leader might return, and take up his rightful place within those hallowed walls. 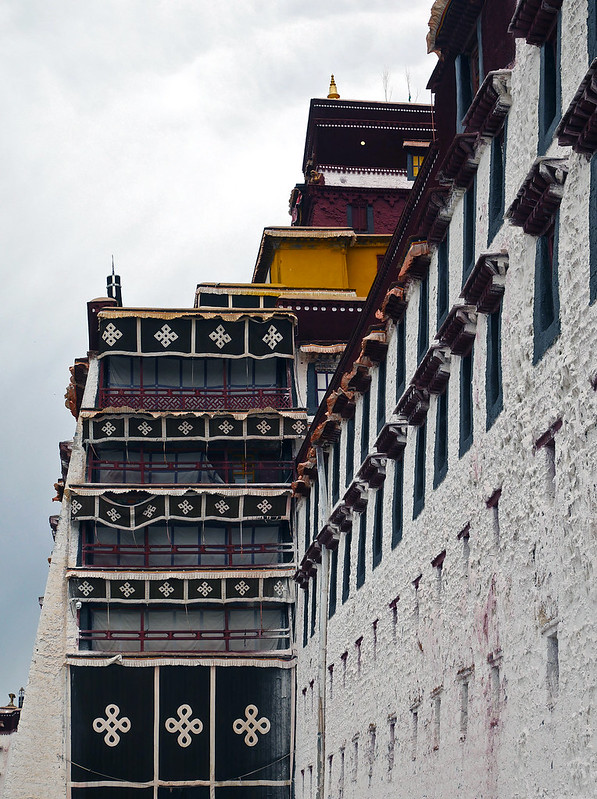 As imposing as the exterior is, its the interior that’ll really take your breadth away. Amidst the thirteen storeys that make up the palace, lie a thousand rooms, 10,000 shrines and about 200,000 statues, all of which took the better part of five decades to craft. By contrast, the structure itself took only three years. As we follow LT through a multitude of ornate chapels, lavish prayer halls, and the bedecked chörten’s (stupas) of Dalai Lamas past, we’re constantly awestruck by the sheer magnificence of it all. And its humbling to think that Tenzin Gyatso, the current Dalai Lama, lived, learned and presided in those very spaces not too long ago. 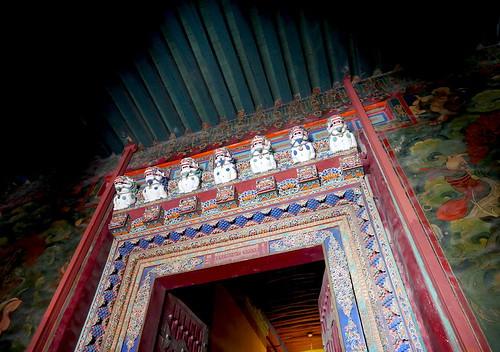 The white palace and the red palace are about the only parts of Potala open to visitors, and they sit astride a mass of satellite buildings and annexes, rising more than 300 meters (980 feet) above the valley floor. Emerging from the red palace, after an enthralling hour spent within, we’re treated to unimpeded vistas of the Capital city, and the Lhasa River Valley beyond. In the distance we spot the railroad bridge that we would have crossed on our way into Lhasa. Ironic to think that this very railway, when it opened some 13-years ago, was the proverbial nail in the coffin for the Tibetan cause. 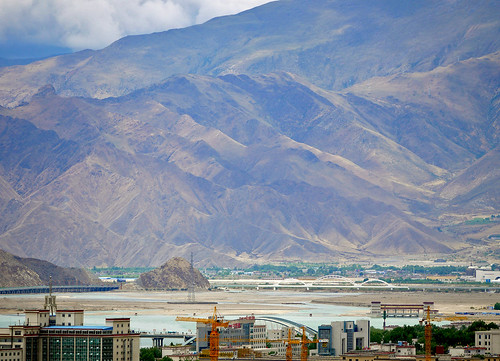 HV and PA departed earlier today, somewhere between our visits to Jokhang and Potala, and tomorrow, the rest of us will go our separate ways. For the majority of the group that’s still here in Lhasa, its our last night together, after almost two weeks of travel. We toast the occasion in style, with a nightcap at the St. Regis, whose rooftop bar has a direct line of sight to Lhasa’s crown jewel. As SK and I both concur, this one has been pretty epic. It’s going to be a hard one to top. 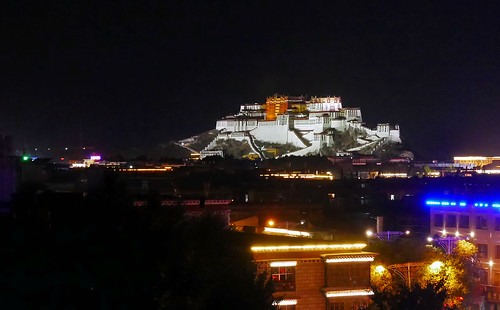 A full set of photos from our time in and around Lhasa can be seen on my Flickr.

2 thoughts on “Despatches from the Silk Road :: The Great Tibetan High”