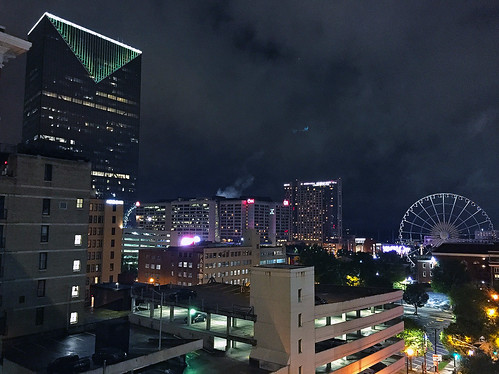 Apart from disrupting air travel occasionally, the POTUS has threatened to slash several state-funded programs over the course of his tenure; National Public Radio (NPR), and Public Broadcasting Service (PBS) amongst them, and, much to the dismay of eight rail-crazed individuals, Amtrak as well. So we’re committed to riding as many of Amtrak‘s long-distance trains while they’re still around, and Atlanta is where we’ve converged, from different corners of the country, to ride the first of these.

I awake to find our WhatsApp group abuzz with activity. Train 19, the Crescent, that will ferry us down to New Orleans, is already running some three hours behind schedule. Having left New York’s Penn Station on time last afternoon, it apparently struck an erroneously parked pick up truck somewhere in the Carolinas. So we have plenty of time to sample some of Atlanta’s culinary offerings, and given that its breakfast o’clock, we make a beeline for regional cultural icon, Waffle House!

Atlanta once had three railroad stations to its credit and as many as five pairs of long-distance trains originating or passing through the city. Built by the Southern Railway almost a century ago, Peachtree Station is all that remains today, and the Crescent is the only train that calls on the city. Under gloomy skies, but with a great deal of excitement, we finally board our Viewliner car, almost 4-hours late… 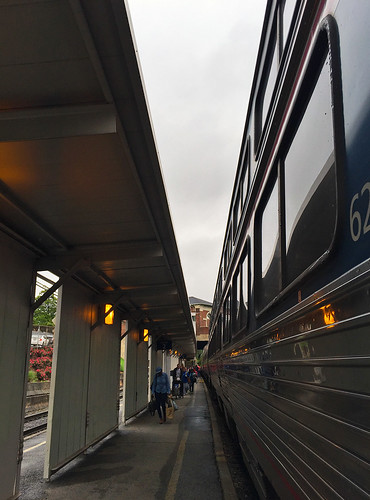 With the Atlanta skyline behind us, we move past the city’s industrial outskirts, then its distant suburbs, but the sprawl appears to be endless. No doubt, the Atlanta metropolitan area counts itself amongst the top ten in the United States, but this is rather unprecedented. Over an hour into our journey south, we cross the state line into Alabama, and it’s still fairly built up. 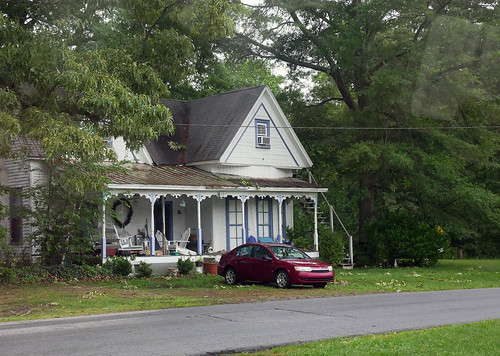 Its also incredibly green, and undulating. I would never have guessed that about Georgia, or Alabama, for that matter. The more you travel, the more you know… 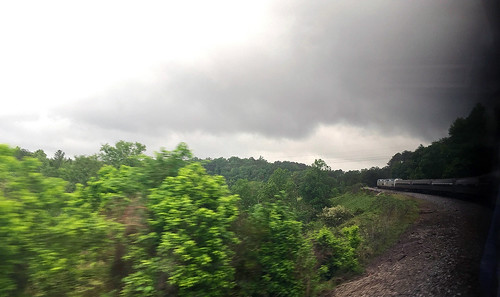 We are the last wave of diners to be seated for lunch in the dining car, and have barely finished when we pull into Birmingham. The largest city in Alabama, Birmingham, much like the city it was named after, was a major industrial center back in the day. The smokestacks around us serving as testimony to that fact. The city’s population, and its fortunes, have declined since, and a walk around its station reveals much the same story. 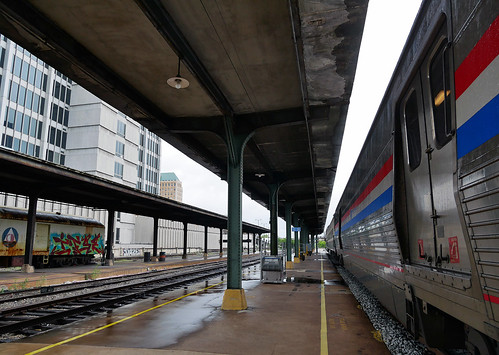 I nap for a bit after lunch – cause, why not? – and awake about an hour or so later to find that we’ve been stationary for some time. The top bunks on the Viewliner cars have windows built into them so I sneak a peek. Outside, the skies have cleared almost magically, revealing the moon, and some incredibly pretty evening light. 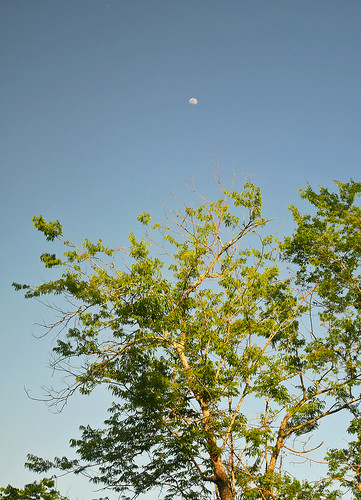 There’s some stirring in the corridor, so I get out of bed to investigate. Rumor has it that the conductors have opened a door on one of the Coach Class carriages up front. It’s got to be something big, for its not everyday in the States that you stumble upon a scene like this… 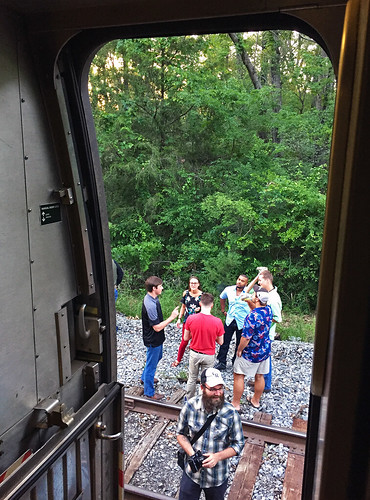 We’re in Boligee, a tiny speck on the Alabama map, some 328-people strong, and just 20-miles east of the Mississippi state line. Up ahead, and out of view, a freight train with mechanical trouble, stranded on a bridge. We’re going to be here for a while, that’s for sure. 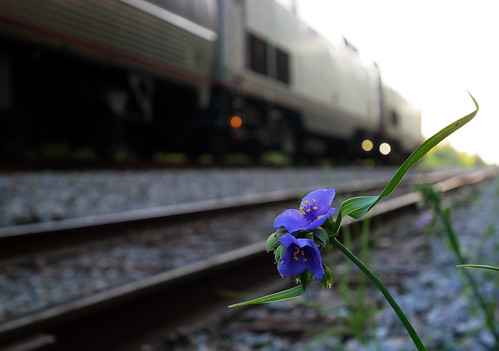 Back in the dining car for dinner, as our plans for a night out in New Orleans quickly fade away, so do the lights on the train. Our engineers are nearing the end of their shift, and are performing a brake test to prep our train for the next crew, who are on their way to Boligee by road. Amtrak doing its absolute best to not delay us any further. 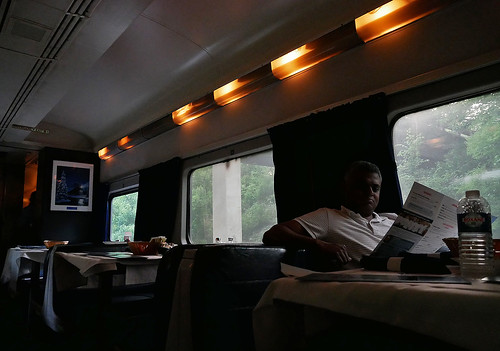 We pull into New Orleans’ Union Passenger Terminal just over nine hours late. Its close to 5 in the morning Central time and most passengers would just make a beeline for their hotel, or wherever it is they were staying, but not us. Intrigued by the sight of two privately owned heritage cars that were added on to the Crescent at Washington DC, we stick around to find out about future travel possibilities… 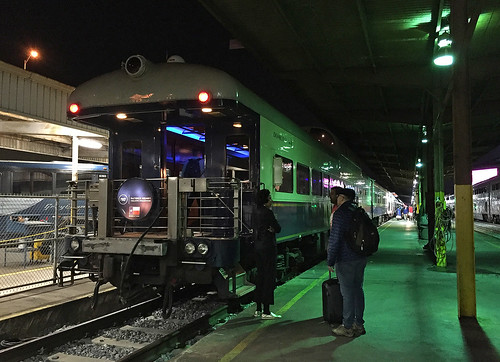 By the time we set out to salvage what’s left of our stay in New Orleans, the town is only beginning to come to life, after, no doubt, a night of fabulous music and degeneracy – this being the last weekend of Jazz Fest. We make up for that with a couple of NOLA classics – leisurely trolley rides and a stroll through its timeless French Quarter. 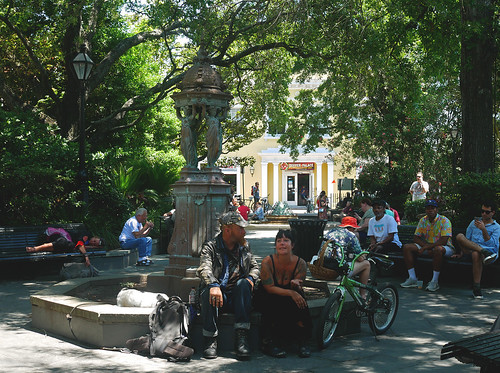 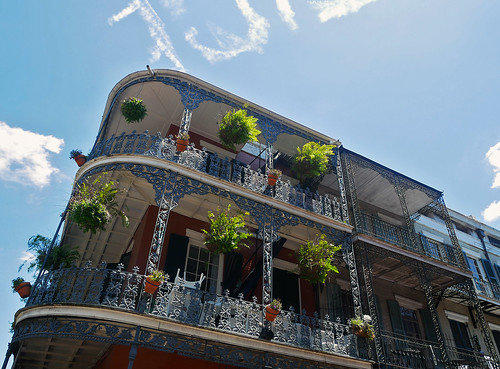 Barely 8-hours after arriving there, we’re back at Union Passenger Terminal to board our next train, leaving hardly any time to admire its attractive Art Deco interior. The station today serves Greyhound, and the likes of Megabus, but is no less important in Amtrak‘s scheme of things, being the point of origin for no less than three of its long-distance trains. And while long-distance train travel is but a shadow of itself today, Amtrak has, to its credit, at least retained those storied names, and are not shy in waxing eloquent about their legacies across their marketing literature. 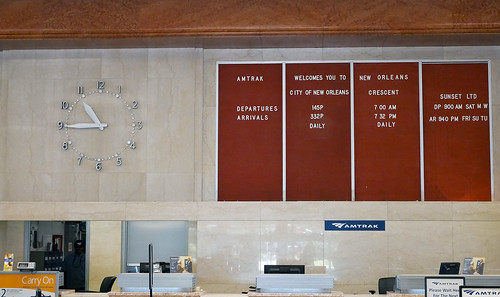 With the Sunset Limited having departed for Los Angeles a few hours prior, and the northbound Crescent understandably delayed, the City of New Orleans is the only train boarding passengers, and by all accounts, is not over subscribed. Ryan, our carriage attendant, is all smiles as he meets us at the door, and obliges us with several group photographs.

Unlike Atlanta, NOLAs urban limits are despatched fairly quickly, and Louisiana’s iconic wetlands or Bayou‘s come into view soon enough. Followed moments later, to our east, by the expansive and ever enchanting Lake Pontchartrain… 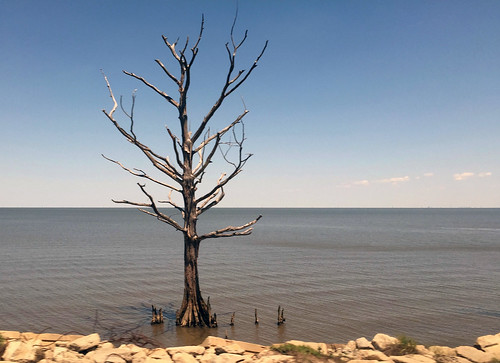 Then its over to the Sightseer Lounge car for the rest of the afternoon – some beers, plenty of sun, and a gaze into the deep south… 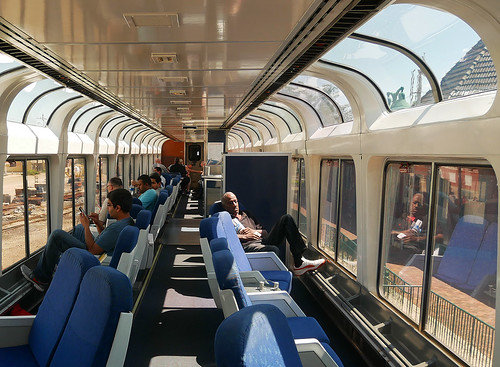 Hammond, McComb, Brookhaven, Hazlehurst – small, nondescript towns that our train calls at, every hour or thereabouts. The plaza outside the station serving as the town square; one main drag lined with a handful of mom and pop stores, and a humble-looking church completing the picture. Nondescript for sure, but still on the system map, and still served by an Amtrak service daily, which, for many in these settlements, is the only way to get around. 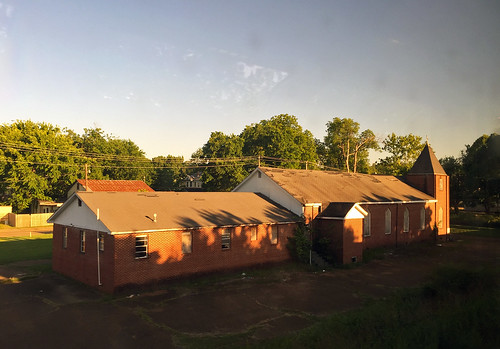 The impressive Art Deco-style Standard Life Building signals our arrival into Jackson, the capital and largest city in the state of Mississippi.  For a change, the station occupies pride of place bang in the center of town. Also for a change, we’re running right on schedule! Up front, Loretta takes over proceedings, attracting a fair amount of attention in the process. In an industry dominated by men, it is rare but always refreshing to see a lady engineer. 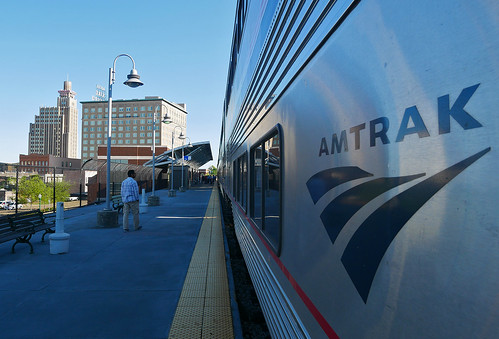 Long shadows begin to form as we inch closer to Yazoo City, MS., which probably hasn’t made the news since 2010, after a tornado ripped through town. Thankfully, we’re nowhere close to tornado season, and things appear rather calm across the prairies… 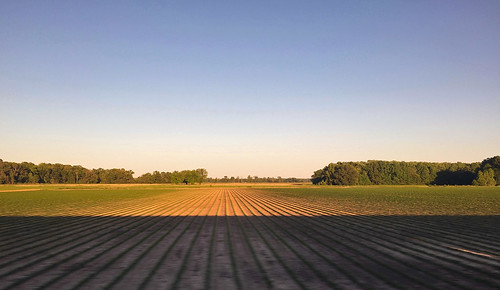 Greenwood lies only 50-miles north of Yazoo City, and is the last station we’ll call at in Mississippi. As one would expect in these parts, its a laid back little town, whose inhabitants seem least perturbed by their main drag being blocked by our train. Staring longingly at Bo’s BBQ & Grill, located right across from the station, I can’t help but wonder, had this been India, they would surely have delivered to our train! 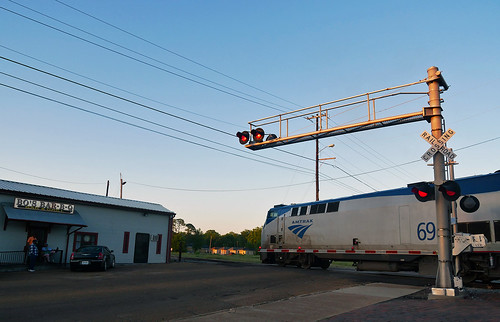 Arrival at Memphis is about 25-minutes early and by the time we walk up to the locomotive, Loretta’s already finished handing over her charge. We catch her in the middle of banter, and she seems most affable, welcoming every one of our random questions, and humoring us some more by posing for photographs. Our lively interaction finally interrupted by the “all aboard” call. 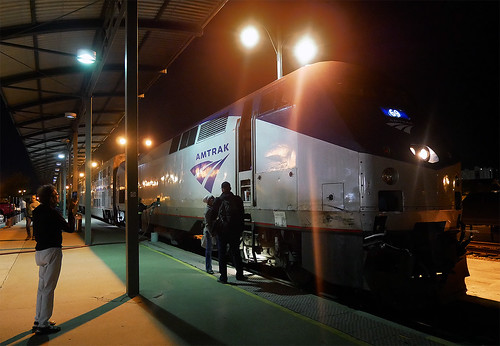 The second largest city in Tennessee, Memphis is only ~530-miles south of Chicago, and the City of New Orleans makes an easy overnighter of it, in both directions. I make a mental note of that as I walk back to our Superliner carriage.

The heat must have kicked in at some point last night, for its all toasty in the roomette when I awake. The drawn curtains reveal a crisp morning, and the town of Champaign-Urbana, which we’ve just pulled into. 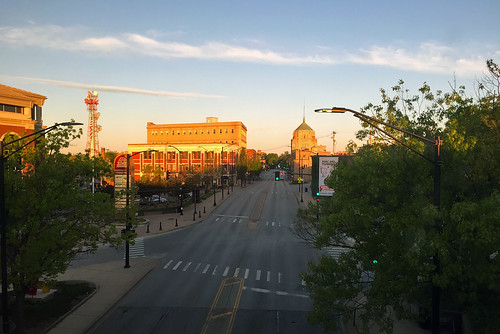 The last call for breakfast is announced moments after we pull out of the station, and I scurry out of bed towards the dining car, which thankfully is adjacent to our sleeper. Everyone in our group seems to have finished already, and save for them, the dining car is empty too. Even the items on the menu seem to have shrunk. The Chicken Biscuit Sandwich is, fittingly, the only option for “hot breakfast”, and I proceed to order that without the least bit of hesitation. 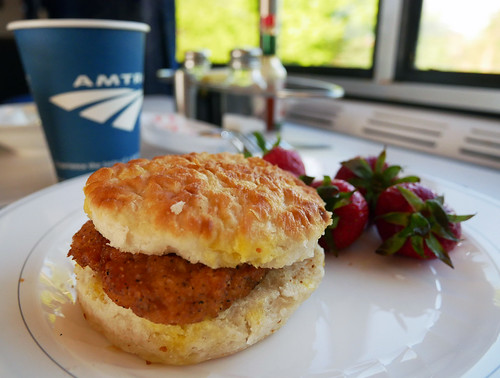 As I emerge from the shower stall and make my way back to our roomette, there’s a familiar skyline visible outside. Not only are we arriving at Chicago’s Union Station well ahead of schedule, but are also treated to the most dramatic view approaching it. 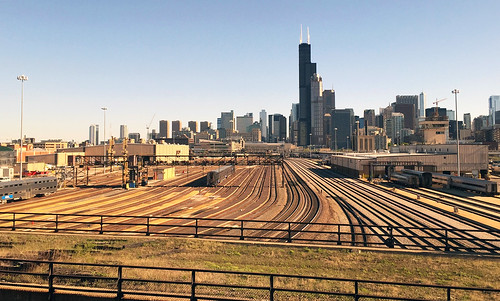 The PA system comes alive, as Ryan plays us a few verses from Johnny Cash’s rendition of a ’71 folk hit, dedicated to a passenger train run by the Illinois Central Railroad.

“…Good mornin’ America, how are you?
Don’t you know me? I’m your native son!
I’m the train they call the City of New Orleans
I’ll be gone 500 miles when the day is done…”

He signs off with a heartfelt message, one thats sure to resonate with many on our train. If you’ve enjoyed traveling with us on the City of New Orleans, he says, do take a moment to speak to your local congressman or woman and let them know why it’s important to keep trains like ours, and Amtrak as a whole, in continued operation, for generations to come.

Addendum: No questions asked, Amtrak gave each one of us a $100 travel voucher for the delay we experienced on the Crescent. This, despite the fact that none of those disruptions were under their control.

A full set of photos from this trip can be seen on my Flickr.

4 thoughts on “The Crescent to the City of New Orleans”