I still recall my first visit to LA, when, as a student, the cheapest ticket I could find was via Salt Lake City. My transit through there wasn’t particularly long, but a single glance outside was enough to make me want to return to Utah.

Return I did, several years later, to the southeastern corner of the state, only to realize that Utah was much too large and far too beautiful. Three years have passed since, and I’m in a different part of the state now, but its that very feeling creeping up on me yet again… 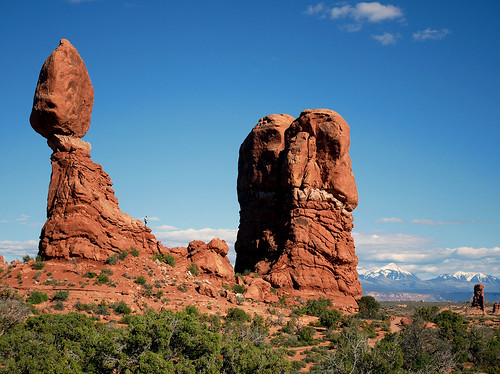 About 230-miles southeast of Salt Lake City, and not far from the Colorado border, lies the town of Moab, a gateway to two of the state’s five national parks – Arches and Canyonlands. Renowned for having the largest collection of natural stone arches in the world, Arches National Park lies only a few miles north of Moab, and despite its 119 square mile footprint, can be explored within a relatively short period of time.

The aptly-named Delicate Arch is probably the most widely recognized landmark within the park, featuring on Utah’s license plates, as well as a stamp commemorating the state’s centennial anniversary of admission to the Union. The arch can easily be viewed from an overlook, but if you want to get up close, a 3-mile hike is in order. As the park literature is quick to point out though, that hike may not be for everyone. 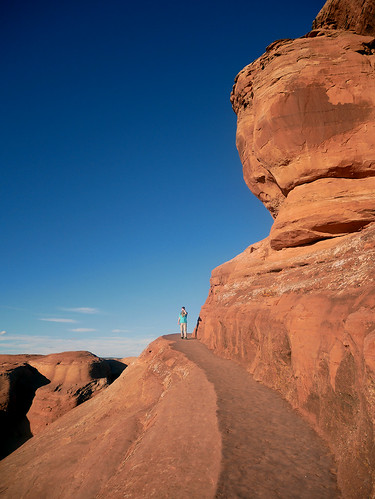 Undeterred by that warning, visitors have arrived by the droves to view the storied arch at sunset, so much so that its akin to evening rush hour by the time I get there. Between tripods, cameras and selfie sticks, there’s barely any room to maneuver, so the smartest thing to do is simply find a perch and wait for the spectacle to unfold.

The freestanding natural arch stands 60-feet or 18 m tall, and although climbing it, or any other arch within the park, is prohibited today, it was scaled in 2006 by climber Dean Potter, who used neither ropes or protection. No mean feat, that. Today, capturing it unobstructed by the hordes, is no less of an achievement… 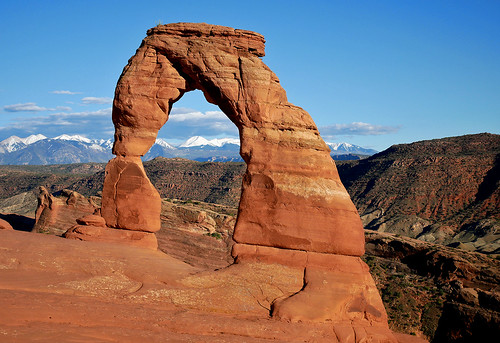 With the snow-capped La Sal Mountains providing a backdrop, and the sandstone hills around us bathed in a warm evening hue, its easy to see why golden hour at Delicate Arch is as popular as it is. 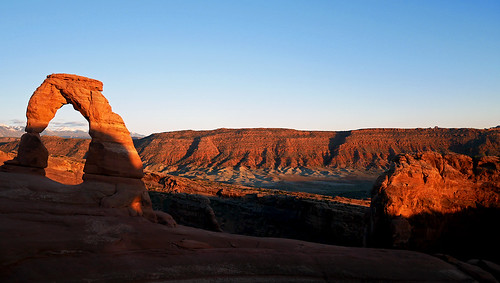 The high desert setting in these parts means that you’re almost always guaranteed a spectacular sunrise and an equally dramatic sunset. And that’s something to keep in mind when your visiting Moab – you start well before the crack of dawn, making up with some shut eye during the day, when its toasty outside. And so it goes for me on the morning of day two… 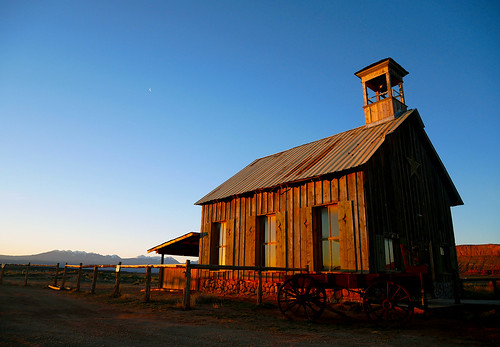 I’ve driven some 10-miles north of town this morning, to check off another item on my ever-expanding bucket list – hot air ballooning. We meet at a gas station just off Highway 191, from where we’re taken in an off-road vehicle to the launch site. There, spread out under a fabulous blue sky, our equally vivid hot air balloon awaits a big breadth of air. 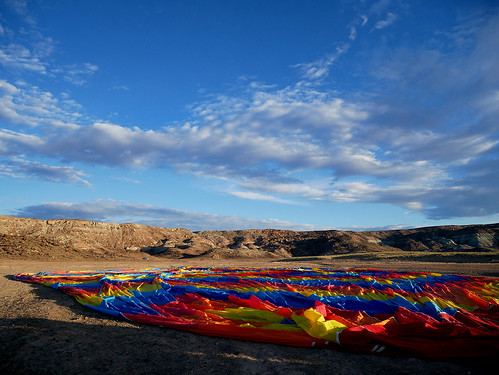 Initially inflated with giant industrial fans, its propane tanks are eventually switched on to give the balloon its final shape and form. The entire process taking about 15-minutes. And then, we’re off.

If you’ve never gotten off the ground sans motorized propulsion, its an unnerving feeling at first. But the balloon stabilizes in flight soon enough, and the views all around capture ones attention eventually. 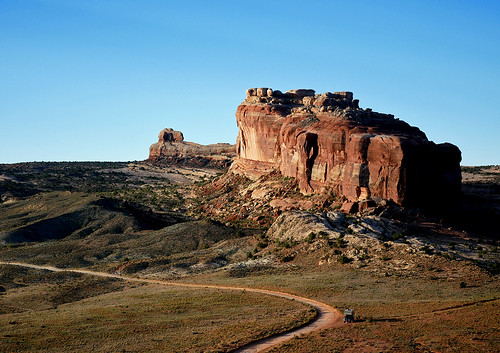 The burner, for all practical purposes, is the engine as far as hot air balloons go. At the command of our pilot Lou, it generates lift and provides buoyancy, but that’s also the extent to which he has control over our flight. The course the balloon takes is entirely dictated by cross streams and the vagaries of wind; the unpredictable nature of the route making for a unique experience each and every time.

This morning, for instance, we began on a westward trajectory, and now, some 30-minutes into our flight, are headed north, approaching, what Lou describes as a complete stroke of luck. 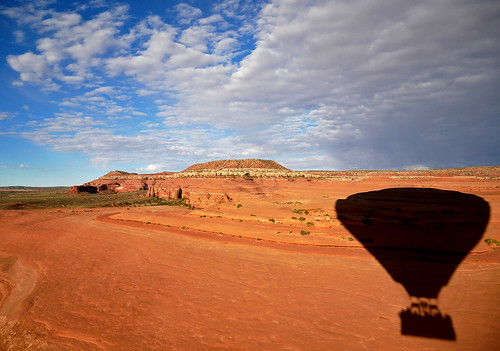 Having crossed a ridge, we begin flying over the appropriately named Hidden Canyon, which, although not a part of the surrounding national parks, is every bit a gem. Carved by the elements over the course of many centuries, its red and white sandstone walls are a tapestry of surreal formations and magical contours… 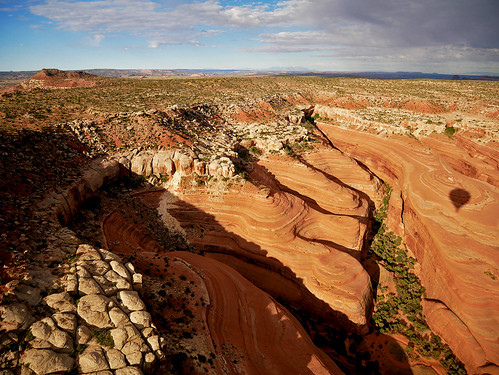 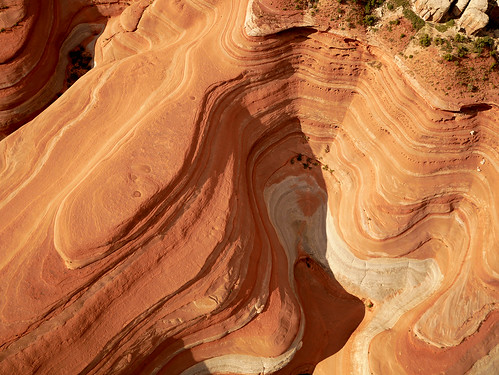 Flying a hot air balloon doesn’t just require a great deal of skill and experience, but in the US, a commercial pilots certificate from the FAA as well. Lou has been at it for the last 16 years, and as he pops open some champagne to toast another successful flight, he recalls some of the more challenging passages he’s had in the past. 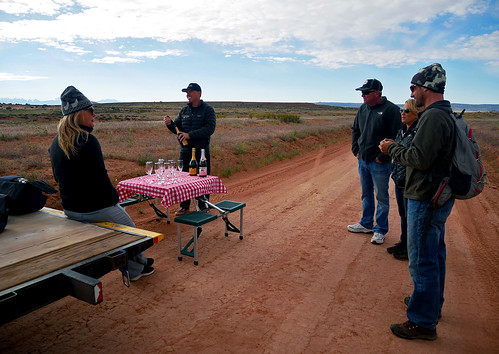 Utah Highway 279 starts just west of Moab, and although not particularly long, it is incredibly scenic. With sheer cliffs on one side – evidently a haven for rock climbers of all capabilities – and the Colorado River on the other, it is one of the most pleasant drives one can do, in an area replete with picturesque routes. 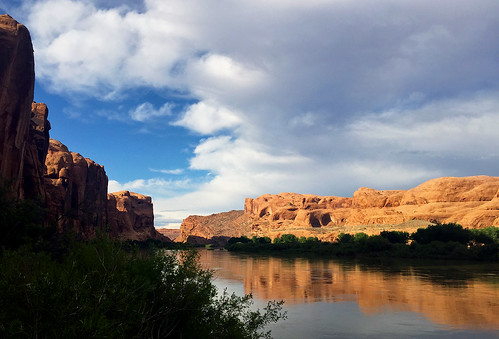 Half way along it, at the point where the river makes a dramatic turn south, lies a campground, and across from it, the trail head to Corona Arch. Like Hidden Canyon, this arch too is not part of the surrounding national parks, and therefore gets overlooked by many. Not a bad thing when you consider how happily devoid of people it is.

If you can hack another 3-mile hike to the arch and back – a fair amount of rock scampering included – then its well worth the effort. And you’ll be rewarded even before reaching your destination, with the less publicized and relatively inconspicuous Bow Tie Arch. 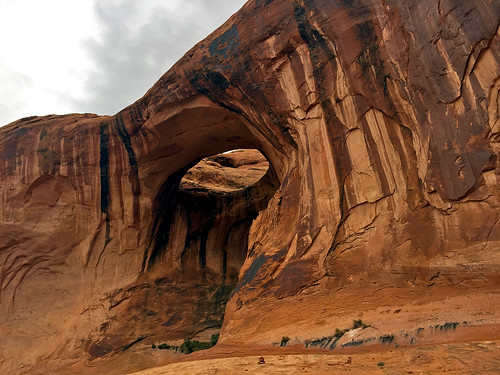 Standing 110-feet tall and spanning 140-feet in width, its difficult to appreciate the sheer might of Corona Arch from a distance. A human at its base, however, provides a much better gauge. Up until 2012, it was home to the world’s largest rope swing, an activity that quickly went viral thanks to YouTube. Following a death in 2013, however, anything remotely resembling a swing has been banned at the site. 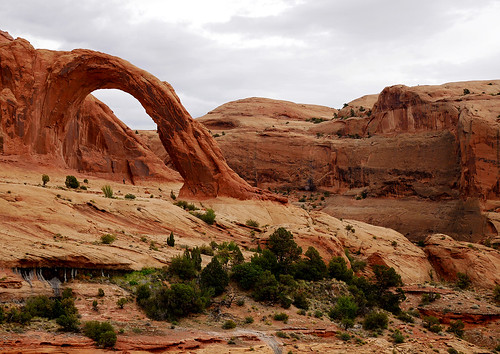 Stunts are not unknown to the area though. Back in the early 80s, pilot Tim Martin flew a small aircraft through Corona Arch! Needless to say, the FAA didn’t take kindly to that heroic feat.

The arch lies within a side canyon of the Colorado River and given its lofty perch, provides sweeping views of the ravine below. Through that canyon runs a railroad that serves Intrepid Potash, the largest producer of Potassium Chloride in the US, who’s plant lies a short distance away, coinciding with the end of Utah Highway 279. 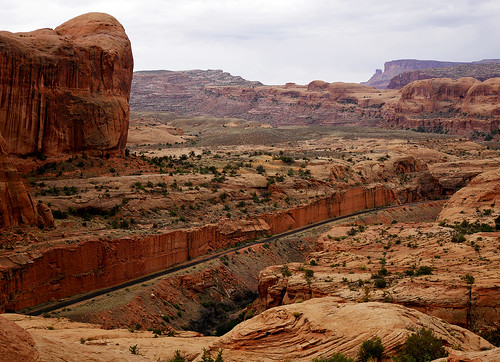 A lot smaller than Arches National Park, and located southwest of Moab, is Dead Horse Point State Park. Its unfortunate name stemming from the 19th century use of the area by cowboys, as a natural stockade for horses, a lot of them eventually dying from exposure.

Sitting relatively high at 5900 feet (1800 m), it offers expansive views of the Colorado River and Canyonlands National Park; a setting so stunning, one could easily gawk at it for hours on end. Not surprisingly, the final scene of Thelma and Louise was filmed here… 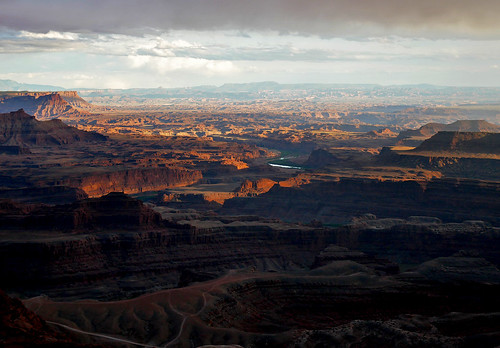 I’ve barely had a moment to take it all in when the evening light turns dramatic, following closely on the heels of scattered rain showers. Then, ever so slowly, a rainbow is revealed. It plunges so deep into the canyon, its almost a full circle. Moments later, a second one comes into view. The shutterbugs go crazy. 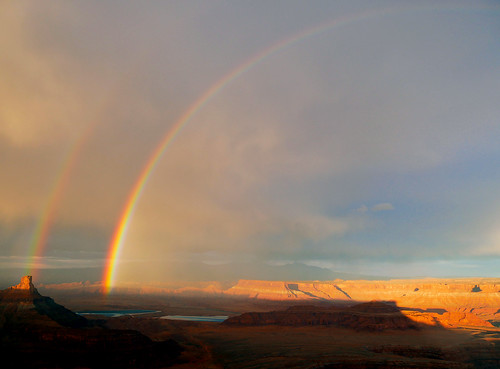 Thirty minutes have gone by, and over to the southeast, the La Sal Mountains are completely obscured by cloud cover. The rainbows though, show no signs of abating… 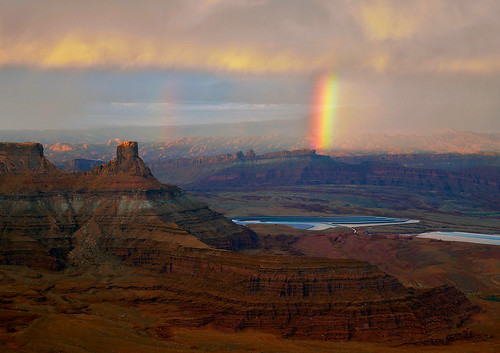 Right behind us, set against the backdrop of a constantly evolving evening sky, a lone Juniper suddenly becomes the cynosure of all eyes. 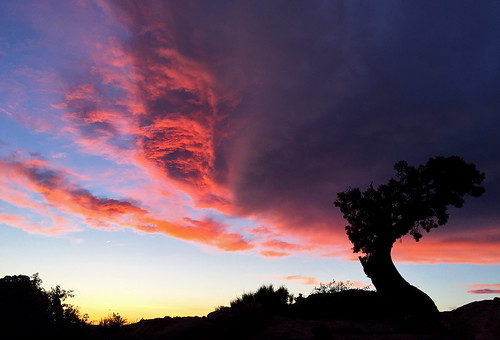 As the angry storm clouds continue their eastward trajectory, there’s little left to view on the horizon, save for the base of the last remaining, and rather resolute rainbow… 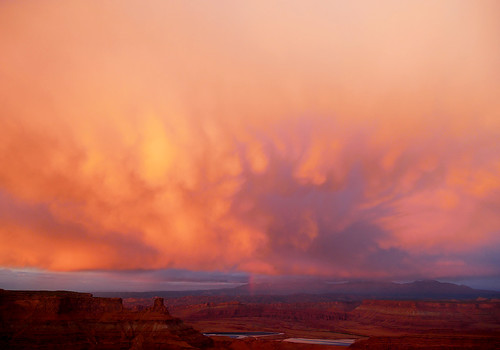 Sometimes, getting up early is, as it turns out, just not early enough. Its around 5:45 AM when I get to Mesa Arch, and there’s already a battery of photographers present, many of whom camped overnight, to catch the sunrise. All the coveted spots are taken, and there’s not even any wiggle room between those countless tripods. So I resign myself to capturing the La Sal Mountains, and a set of striking sandstone fins, silhouetted against the first rays of light. 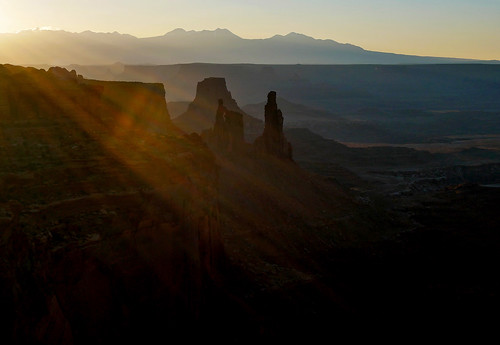 But as I soon discover, despite the starbursts and flares everyone positioned so perfectly has managed to get by now, the arch itself is so striking, its photogenic from practically any angle. Not surprisingly, Microsoft used it as one of the standard desktop backgrounds on their Windows 7 operating system.

Mesa Arch lies within Canyonlands, the largest of Utah’s five national parks. Covering an area of 527 square miles, it is, to put things in perspective, roughly five times the size of Arches National Park. Countless canyons, buttes and mesas, carved out by the Colorado and Green Rivers, make up the landform here, and the park itself is divided into four districts. The much photographed arch lies within the Island in the Sky district, named so for the wide and mostly level mesa that makes up its core.

There is, as one would imagine, no shortage of things to do at Canyonlands, and unlike Arches, you do need plenty of time to do the park any justice. On my drive back to Moab, I pause at one of the overlooks. The 18-mile long Shafer Canyon off-roading trail looks most enticing, but given the capabilities of my economy rental car, is probably best admired from a safe distance… 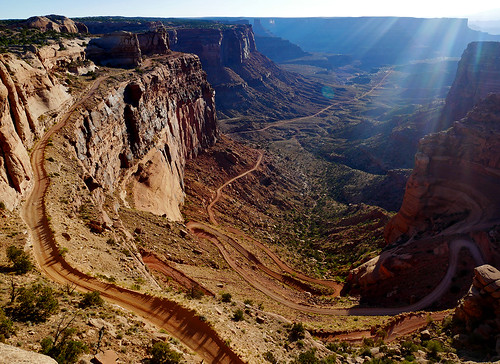 On my second and final visit to Arches, I drive to The Windows section of the park. Here, the North and South Window arches are separated visually by a large “nose”, the remnant of an enormous fin. Its an imposing sight for sure, as the formations first come into view, and a familiar one too, for those who’ve seen Indiana Jones and the Last Crusade. 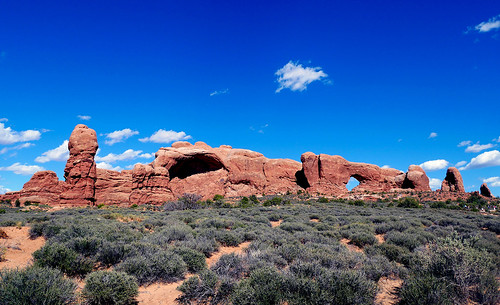 Turret Arch sits directly to the south of The Windows. Younger and smaller, relatively speaking, the fin being carved by it is currently about 100-feet wide. A secondary, smaller arch lies directly to its right, and time will tell – probably a few hundred thousand years from now – whether the two will join to eventually create a much larger arch. One that possibly even overshadows The Windows… 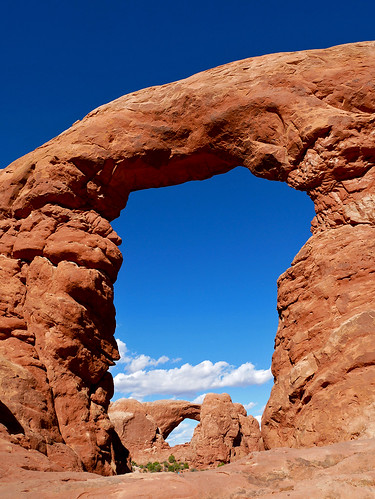 Looping around the north side of the arches is Primitive Trail, a less frequented but far more picturesque hike that leads back to the trail head. Observing them from here, its easy to appreciate why The Windows are often referred to as “The Spectacles”. 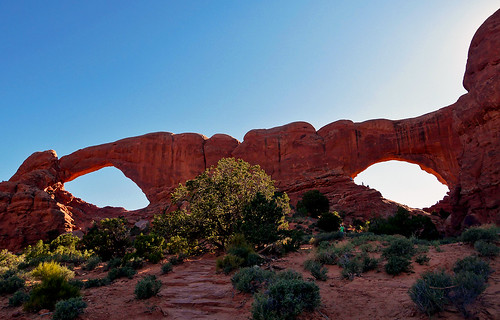 Bryce, Zion, Capitol Reef, the Salt Flats. There’s plenty more left to explore in Utah, and its a matter of time before I return to this, the most spectacular of the southwestern states. Till then, I have another glorious sundown to look forward to, as I make my long way back to SLC.

A full set of photos from my visit can be seen on my Flickr.