The gate agent tries desperately to find customers willing to forfeit her overbooked flight. Along with a free night’s stay, she’s also offering a roundtrip voucher for two. Think about it, she says, Valentine’s Day is coming up, and you could be heading to a nice warm place with that special someone! It’s the middle of winter here in Detroit, and make no mistake, the city does get awfully cold, but my connecting flight is headed to someplace even colder, Marquette, MI!

It boasts all of two gates, but courtesy of a seasonal service to some place in Canada, it’s still considered “international”. In the arrivals hall, an episode of “Air Crash Investigation” plays unapologetically on the TV set. Outside, the temperature is 3F (-16C), without factoring in the wind. This has been one of our milder days, James says to me with a smile, as we head out into the darkness. Welcome to the UP! 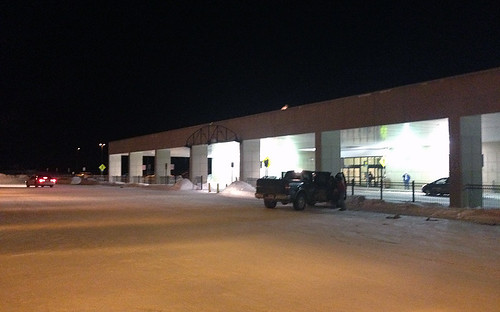 Located on Lake Superior, Marquette is the largest city on Michigan’s Upper Peninsula, referred to locally as “the UP”. It’s known for its port, and is home to the University of Northern Michigan. The University alone accounts for half the town’s population! In a recent survey, Marquette was voted as one of the best places to retire in the US, so I’m guessing it has its fair share of retirees too. All that being said, it’s not likely to be your typical winter destination, which made it all the more appealing to me 😉 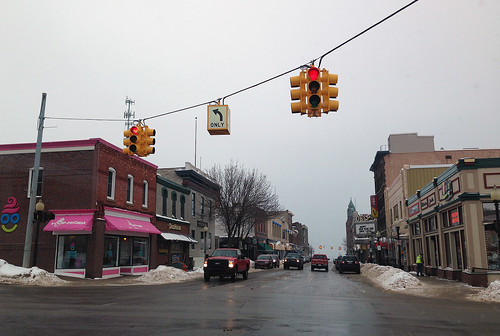 Although the town owes its name to a French Missionary, it traces its roots back to mining. In the middle of the 19th-century, rich ore deposits were discovered just west of present-day Marquette. A town was established, made up mostly of Welsh and Scandinavian miners, and a few years later, the railroads followed suit. In a short span of time, Marquette became the premier port of call on the Upper Peninsula.

A vestige from that era persists to this day. Built in 1911 for the Lake Superior and Ishpeming Railroad, the Iron Ore Dock in Marquette’s Upper Harbor is the only such facility left in the region! Below it is berthed the Mesabi Miner, quite some distance away from its home port in Delaware! After its done offloading coal for the adjacent power plant, it will be the last scheduled vessel to leave these shores this season, before the shipping channels freeze over completely. 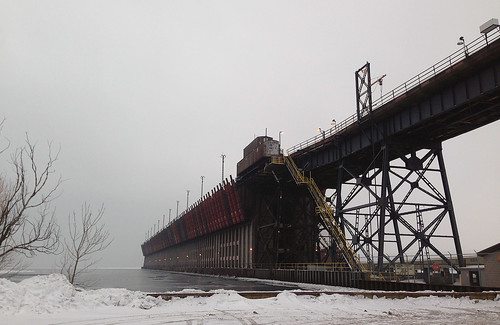 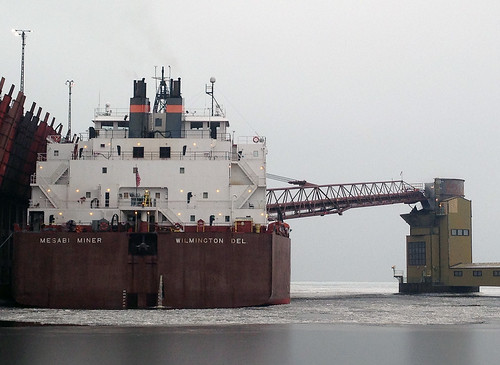 A short walk from the dock, just past the breakwater, lies Presque Isle Park. Located at the northern tip of Marquette, on what is essentially a headland, the park spans over 300-acres, and is crisscrossed by hiking trails, most of them offering sweeping views of the humongous body of water that is Lake Superior. The recreational go-to for residents in the summer months, it takes on an almost ethereal quality this time of year. 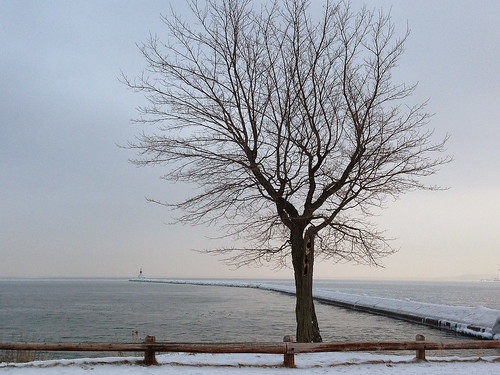 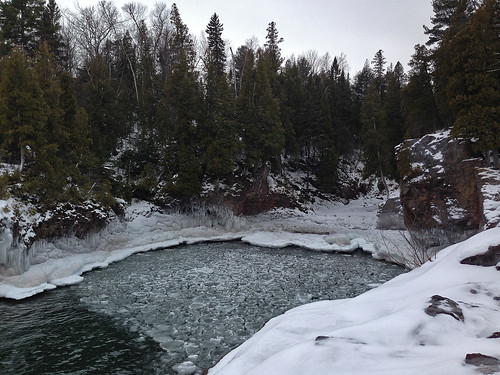 Winter is tough in these parts, no question about that. It’s understandable that a lot of people tend to just hunker down through the season. But in fact, the only way to beat those winter blues is to completely immerse yourself in it. Think winter sports – sledding, downhill skiing, ice-skating, fat tire biking, snowshoeing, and pond hockey, to name a few. And Marquette has it all! With hiking out of the way, my hosts are hell bent on taking me cross-country skiing!

Our first stop en route to XC skiing, as the pros refer to it, is Lake Superior Road Side Park. A public beach, at most other times, what lies in front of us today is nothing but a giant, contorted mass of ice! Even in the warmest months, the beach isn’t nearly as wide as it appears. To get to water’s edge, we will have to tread carefully over frozen dunes, and some waves! 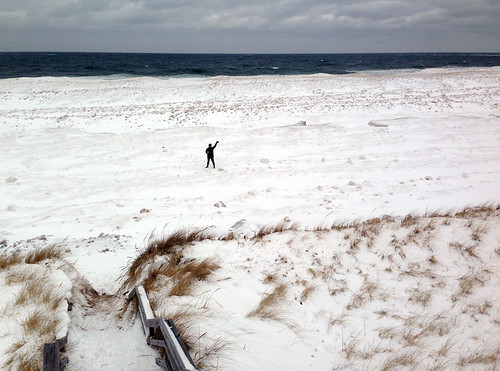 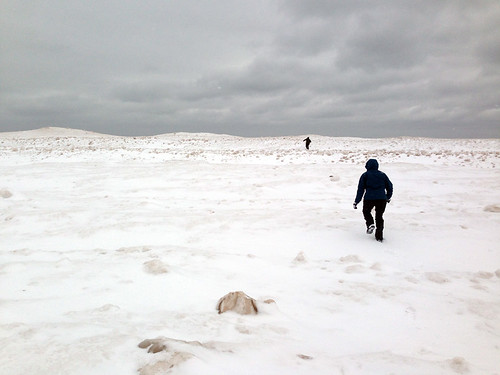 Valley Spur lies about 50-miles east of Marquette, and the most scenic way to get there is via the M-28. The state highway essentially traverses the UP, hugging the coastline for most part, and passing through villages with names like Au Train and Christmas! As the road turns south at Munising, it’s a picture-perfect drive through the Hiawatha National Forest. 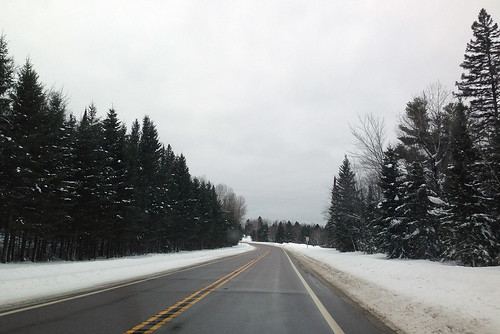 Set amidst groves of hemlock and pine, Valley Spur is one of the preferred destinations for cross-country skiing in the Upper Peninsula. The area was named after a logging railroad that ran through here, and the warm up trail loop (for beginners like me, essentially!) follows the original 2.8-mile alignment of that railroad!

Given that my one and only attempt with skiing (downhill) was an utter disaster, I have my reservations about this endeavor too, but decide to persist. I fall a few times, but I eventually get the hang of it, and clock up a grand total of 4-miles! It does help, of course, that the trails are impeccably groomed, and that I am amply aided by my seasoned XC-skiing hosts. 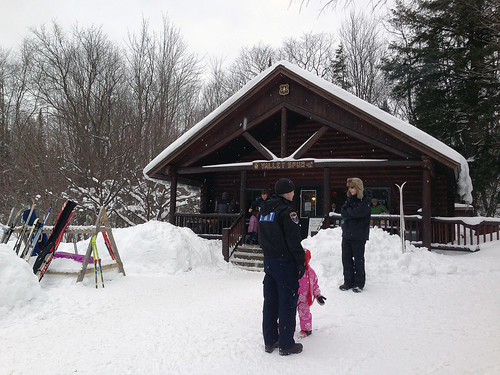 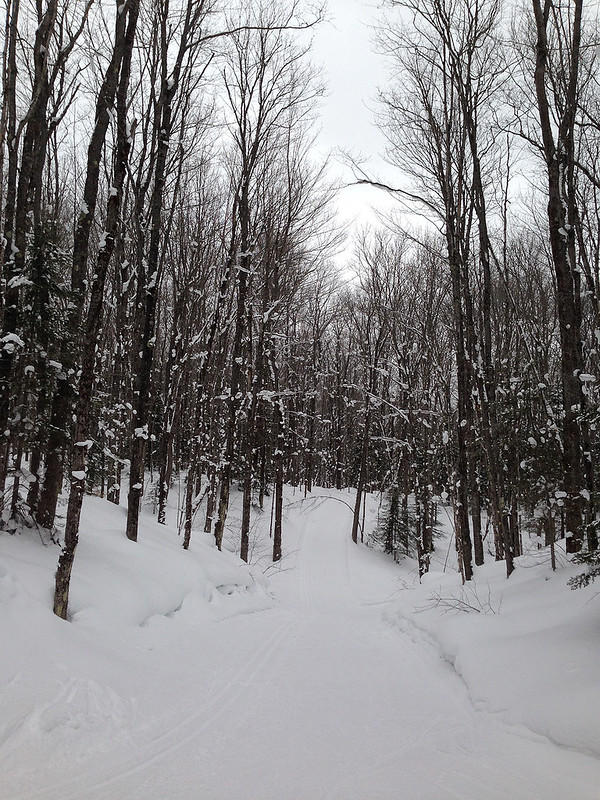 Back at Marquette, we settle in for a scrumptious dinner at the Steinhaus.  For a city this size, it has a surprising number of restaurants and cafes, all of them of a fairly high caliber. The rest of the culinary landscape here is shaped by food co-ops, specialty coffee shops, organic stores, and a handful of microbreweries, churning out some excellent brews. And with names like Dead River Coffee and Ore Dock Brewing Company, they’re proud of their pedigree too!

Sure, a lot of this caters to the younger university crowd, but Marquette has been witness to a bit of a reverse migration of late, with people in their 20s and 30s choosing to return home from destinations they once looked upon with envy, California and the east coast, in particular. 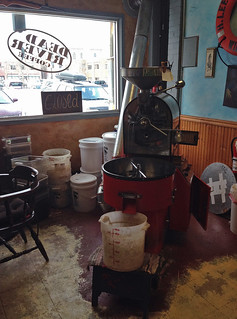 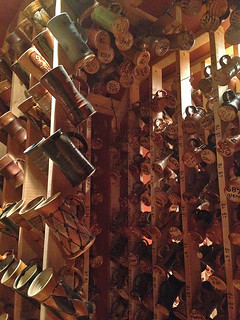 I’m back at Sawyer “International”, with a little daylight remaining before my flight departs. Leaving aside its diminutive terminal, it’s astounding to see just how large an airport it is, given that only a handful of regional jets call on it each day. Back in the Cold War days though, it was an important air base, hosting B-52 bombers, and necessitating a runway 2.3 miles long! 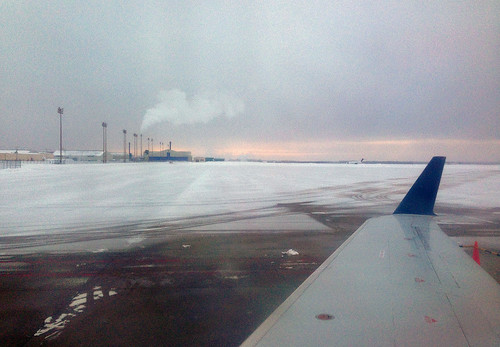 Epilogue: All told, Marquette recorded 157-inches of snow for the 2014-15 winter season, making it the snowiest city in the country! Folks in the UP weren’t particularly pleased though – as it turns out, they were 11 inches shy of their winter average!

A full set of pictures from my trip can be seen here.

One thought on “UP and about in Marquette”