A lot of people outside the US still consider Puerto Rico to be a sovereign state. Not surprising, given how removed it is culturally and socially; and if you happen to be in the middle of February, climatically too! It is one of those unique destinations that has all the obvious advantages of being located in the Caribbean, while still allowing easy access form the mainland United States; a relatively short domestic flight for one; and in my case, no need for a visa!

San Juan is its capital, and is well served by all the major carriers, although a lot of people choose to fly into Aguadilla instead. In doing so, however, they miss out on one of the best kept colonial city centers in Latin America! 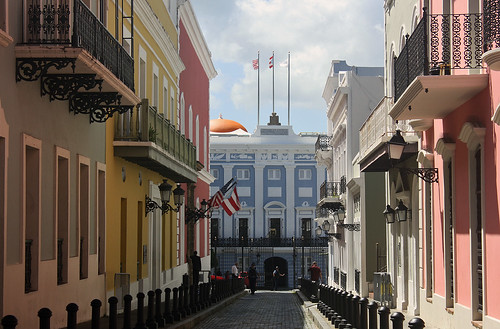 San Juan as a city is quite large, but practically everything of interest to a visitor lies in its old quarter, located on an islet, connected to the main land by means of a causeway. To appreciate San Juan’s strategic location, its natural setting as a port, and the very reason it came to be, its worth starting at Castillo San Felipe del Morro, an impressive fortification that lies on the western edge of the island. 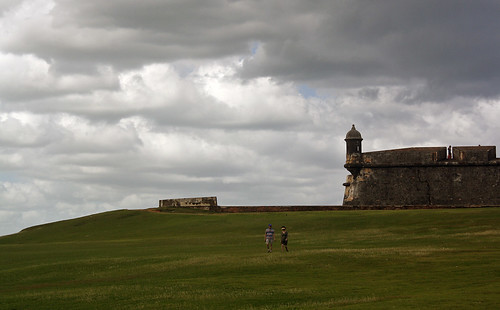 A World Heritage site today, it was built in the 16th-century to guard the entrance to San Juan Bay. Located on a bluff, it offers commanding views of the ocean and the city, and has stood witness to several attacks, first from the British, then the Dutch, and eventually, the United States… 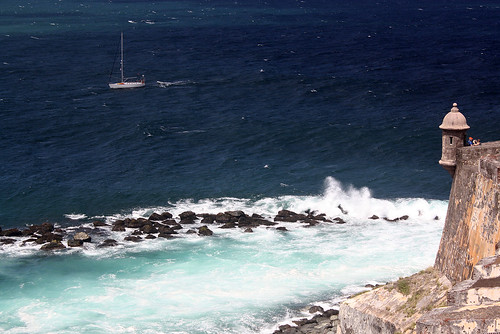 Being the second oldest city established by the Spanish in Latin America, San Juan obviously has a lot to offer; monuments and museums; parks, restaurants and the like. But more than anything, it’s just a wonderful town to stroll about in; watch the world go by in slow motion at a plaza, or just lose yourself in an alley or two. It’s fairly compact too, so you can cover a lot of ground within a day. 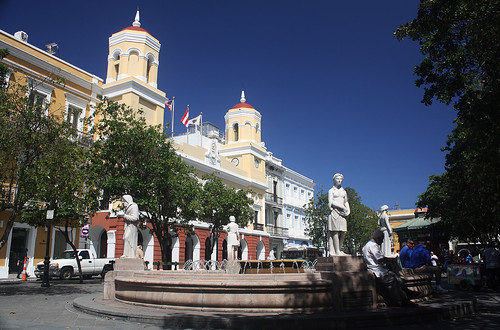 With overhanging Banyan trees providing shade, and uninterrupted views of San Juan Bay, Paseo de La Princesa is one of the most pleasant walks in town. Completed in 1853, the promenade weaves its way along the old city’s fortification. 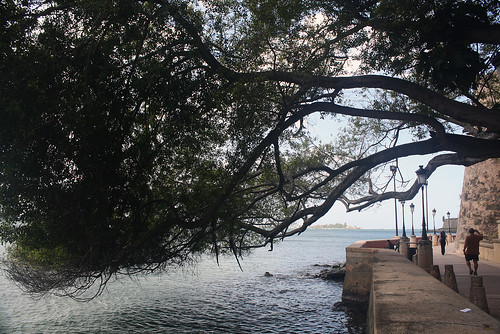 For lunch, I head to Cafetería Mallorca, a local institution and one that’s highly recommended by a friend who has roots in PR. The pernil is great, and the watermelon juice too (no cervezas on offer, unfortunately!), but to locals the place is better known for its baked goods. Mallorca itself is a variety of local bread, and the restaurant probably gets its name from that. 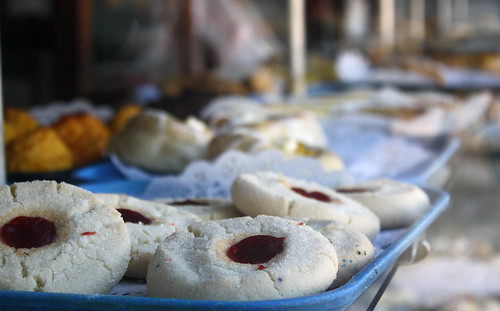 Rincón lies about 95-miles west of San Juan, and it takes the better part of 3-hours to get there. Most of the traffic bottlenecks are around Aguadilla, the biggest surfing destination on the island, located only 10-miles north of Rincón. No doubt, Rincón attracts it’s fair share of surfers too, but the town is a lot smaller and much more laid back.

I don’t have any interest in surfing, and probably very little aptitude for it too, but on the recommendation of a few friends, I’ve chosen to spend the rest of my Puerto Rico vacation here. Rincón is also where I’m experimenting with AirBnB for the first time, and through some stroke of luck, I’ve landed upon this beautiful home on the back roads of town. 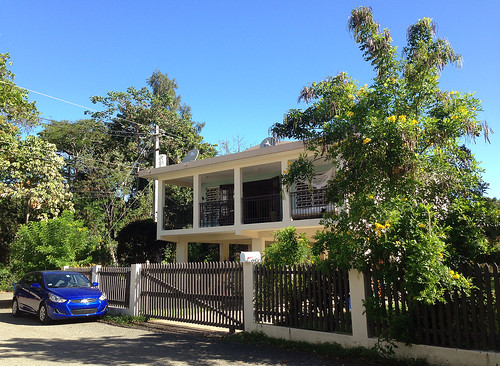 The hosts’ husband is a bamboo sculptor, and one of his creations occupies a prime spot on their balcony. The home comes complete with two of the most adorable dogs ever, Paloma and Roxy! 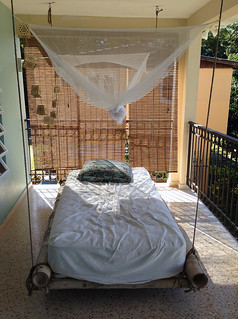 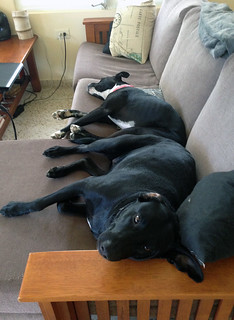 It’s also a very short walk from their local beach, and I make it there in time for sundown… 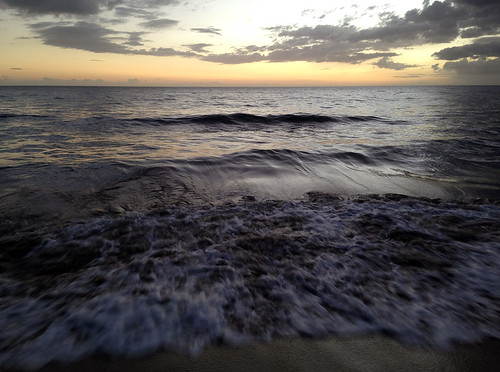 On Thursday evenings, Rincón’s town square hosts “Art Walk”, a weekly event that brings together local artisans hawking everything from custom tee-shirts to glassware; ceramics to hot sauce! Amongst them is a vendor selling bamboo lampshades, who’s house I happen to be staying at!

Local musicians perform under the gazebo, occasionally recruiting dancers from the crowd. Even after the art fair begins to die down, the informal event moves across the street from the Plaza, and the music and dance continues unabated… 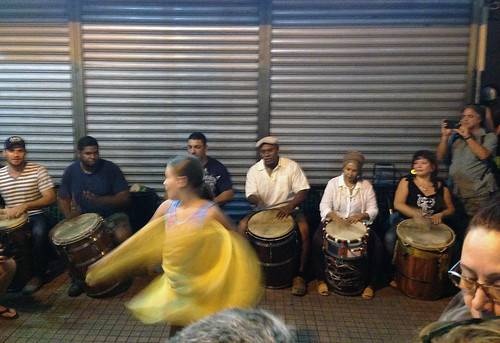 After a rather filling breakfast of Quesitos at EC Bakery, I head over to Steps Beach, a ten-minute drive from where I’m staying. At this point, its worthwhile mentioning that you most certainly need a vehicle to get around. Outside of San Juan, there is no semblance of public transport, anywhere! The distances being short within Rincón, a lot of people living here make do with bikes, but be warned, the terrain in and around town can get hilly!

A short stretch of dirt road branches off the main highway (Route 413) towards a trailer shack, hawking everything from chilled coconut water and Empanadas, to aquatic gear for rent. It’s the first and only indication that you’ve reached Steps Beach! The beach itself was named after this block of concrete steps that washed ashore some years ago… 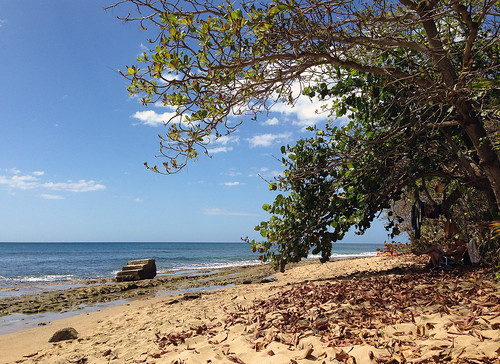 Steps Beach is not particularly large, nor too crowded, and that’s probably what makes it so idyllic. It’s also not the ideal destination for swimming, unfortunately. Instead, being the gateway to Tres Palmas Marine Reserve, it is one of the best spots for snorkeling in all of Puerto Rico! Despite the back pain that I’m presently nursing, making my way through those stunning corals is one of the most relaxing things I’ve done in a very long time.

The beach is one of many that line the Rincón coastline, and after spending a few hours there, I head to Maria‘s Beach, just a couple of miles up the coastal road. A handful of al fresco eateries dot the road leading to the beach, amongst them an inviting cart selling Pinchos. The staple amongst street food in Puerto Rico, Pinchos are essentially skewers of grilled meat that can be ordered in Chicken or Pork. They go down best with the local brew, Medalla. 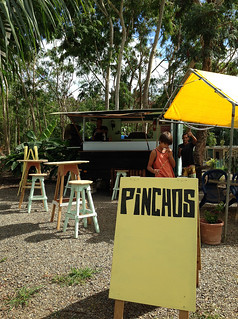 Continuing along that road, I make a quick stop at Faro de Punta Higuero, Rincón’s historic lighthouse. As an attraction itself, it’s nothing to write home about, but its location on a bluff provides sweeping vistas of the ocean, and sitting below it, beautiful Domes Beach. 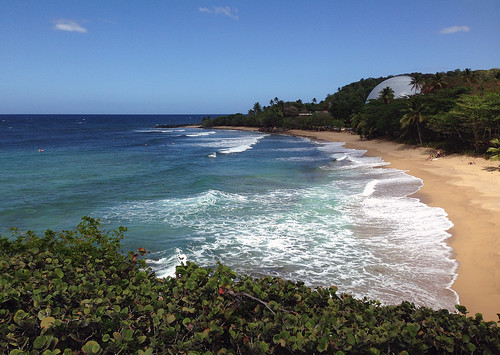 As is obvious from the picture, it was named so after the reactor dome of a decommissioned nuclear plant that lies adjacent to it! Known for its waves, Domes Beach is a natural favorite amongst surfers.

As the day begins to draw to a close, I make my way down to Villa Confresi. A beachfront hotel and bar, it’s probably best known for its house drink, the legendary El Pirata. Served in a coconut, it features four Puerto Rican rums, coconut water and cinnamon. It’s potent for sure, but also pretty darn addictive, so I try and sip on it with some restraint, as I watch the spectacle of a Rincón sunset unfold… 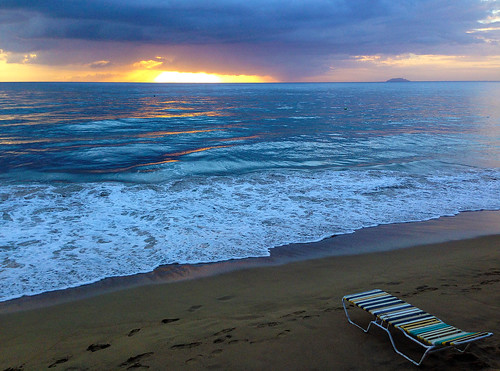 La Cambija started off as an extension to someone’s kitchen; a counter and a couple of bar stools essentially. Its expanded considerably since, and taken over most of that street corner the house sits on! It is here that I have my first taste of seafood in Puerto Rico, and my order of grilled Grouper Tacos is absolutely divine! 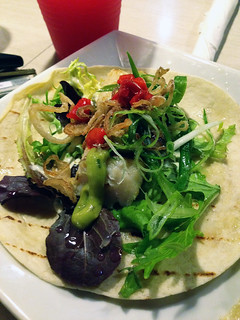 My next and last stop for the night is Pool Bar, one that serves Sushi and Yakitori; features a tiny pool (used by no one), and a giant projector showing surfer films on constant loop (watched by no one!). It’s the quintessential expat hangout, but a novel concept nonetheless. 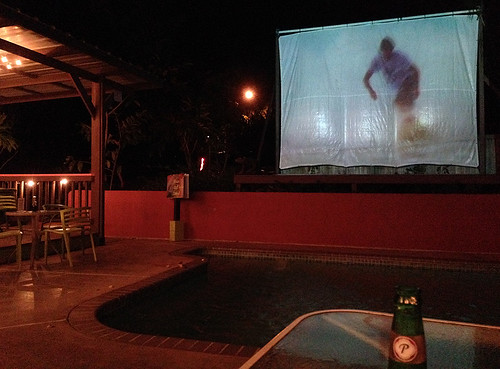 Located on top of a hill, La Rosa Inglesa (The English Rose) is accessed by one of the steepest roads I’ve ever driven on! One look at it, and I’m determined to stay there, if I ever make it back to these parts again. Built into the side of a bluff, the bed and breakfast offers stunning ocean views; and amongst other items on the enticing menu, a stellar Huevos Rancheros! 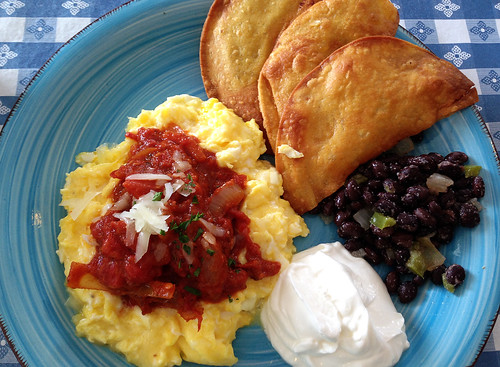 At the bottom of the hill, that gravity-defying road meets Route 413, at the very point where a little dirt track leads to Steps Beach. I’d like to think of it as the happiest intersection on the island 😉

I’m back on the beach once more, to get just a little more Vitamin D; one last joyful dip in reef heaven, and maybe a chilled serving of coconut water in between… 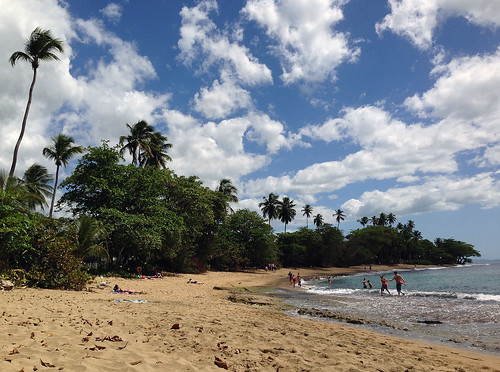 And then, its back to a very cold reality – snowscapes, and the long, frigid tail end of winter on the East Coast!

A full set of pictures from my Puerto Rico trip can be seen here.

2 thoughts on “Pretty as Puerto Rico”