Gallup is the most populous town between Flagstaff and Albuquerque in the state of New Mexico. But that’s not saying much at all. The town itself is unremarkable and highly unlikely to feature on any itinerary through this part of the country. Regardless of all that, the four of us have made our way here, having left Albuquerque at the crack of dawn, to receive a posse of equally rail-obsessed individuals, due to arrive from the somewhat far away state of California, on board the Southwest Chief, the only passenger train to call on Gallup! 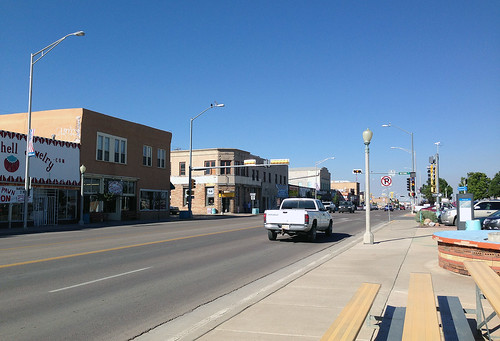 Our final destination lies in the state of Colorado, but we will be on the road for the better part of the day, traversing four states in all today. The Southwestern United States comprise some of the most beautiful parts of the country, and each successive foray into this region has only served to solidify that fact for me. I’m behind the wheel today after a 8-month hiatus, and as amazing as the beautifully-surfaced, near-empty roads are to drive on, I somehow wish I was a passenger instead…

The very core of the Southwest is made up of the states of New Mexico, Arizona, Utah and Colorado and the region is referred to locally as “Four Corners.” With its rugged high plains, windswept mesas, and rolling desertscape, the Four Corners region best exemplifies the “wild west,” a land well romanced by Hollywood in decades past.

At the quadripoint where the boundaries of the four states meet – the only such point in the United States – a plaque symbolizes the Four Corners. A visitor centre has sprung up around the monument in recent years, and while that in itself is disappointing, and completely overrun by tourists, at least it enables me to sample some Navajo Indian cuisine for the first time! 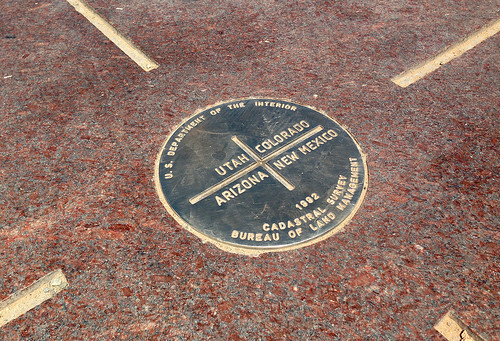 Monument Valley lies some 200-miles north of Gallup, and in the 3.5 hours it takes to cover that distance, the change in landscape couldn’t be more dramatic. Route 163, north of Kayenta, can best be described as a teaser to what lies beyond. There in the distance lurk the craggy silhouettes of majestic Monument Valley; around us the sweeping expanse of tribal reservations, and down in the middle, a little track of well-paved asphalt egging us on. It is every bit picture-postcard perfect; the stuff movies are often made of.

Monument Valley Navajo Tribal Park, which takes its name from nearby reservation land, is where most visitors to the region end up. The visitor centre lies in Utah, but the park itself straddles over 91,000 acres, stretching well into neighbouring Arizona! From the visitor centre, the sheer vastness of it is rather difficult to comprehend, but the views alone will make your trip to the Four Corners region worthwhile. For those with more time on hand, a 17-mile loop road allows you to explore the valley in greater detail.

A trio of magnificent sandstone buttes, some rising as high as 1000-feet, occupy centrestage on the valley floor, making for some of the most striking geological features to be found here. The valley itself was carved by meandering rivers that once flowed through here, and the vivid red colour comes from iron oxide exposed in the weathered siltstone deposited by those very rivers.

The vistas have probably changed very little at John Wayne’s Point, an overlook dedicated to the actor, but continue to inspire droves of travelers to this day. 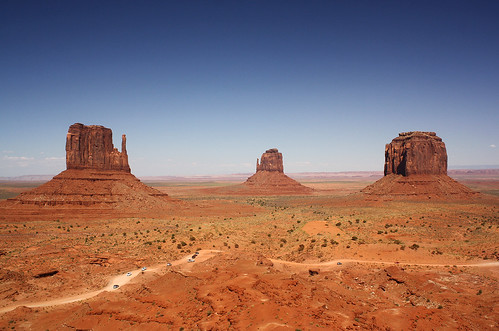 We’ve already spent over six hours on the road today, and have another three to go till Durango is reached. Plenty of driving in a day for someone who hasn’t driven in months! But with the terrain changing practically every few miles, the route to Durango is no less spectacular. Add to that the soothing hues of fading evening light, and any thoughts of fatigue are suddenly put to rest. This one deserves to be savoured…

The town of Durango was settled in the late 19th-century and owes its existence to the Denver & Rio Grande Western Railroad. That railroad company is long gone but a remnant of it remains in the form of the Durango and Silverton, a narrow-gauge tourist railroad, raison d’être for Durango today!

While its historic downtown is pleasant enough to stroll through, the soul of the town remains its century-old railway depot, where the train schedule, for one, is a lot more impressive than the one at Gallup! It is here that our “gang” of 13 has assembled, from different corners of the country, Canada and even one from India, to journey along one of the most storied heritage rail lines in the US. 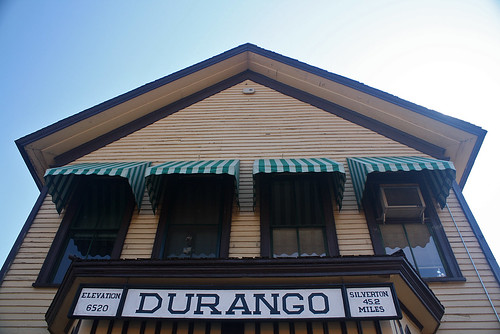 Silverton lies some 45-miles from Durango, with the trains (there are 3 morning departures in peak season) taking 3.5 hours to cover the same. Charting a course through the Animas River Valley, the railway gains almost 3000 ft in elevation, all the hard work being performed by 1920s-era steam locomotives, pulling no less than ten carriages. Truly, a sight to behold!

The journey is, without doubt, a sensory treat from start to finish, but its pièce de résistance remains a section of track known as the High Line. With an unforgiving rock face on one side and a precarious 250-foot drop on the other, the locomotive eases its train through a sharp 28-degree curve, the final approach to the High Bridge, a viaduct over the Animas River. Even if the height doesn’t bother you, pause for a moment to take stock of this incredible feat of engineering, completed as long back as 1881! 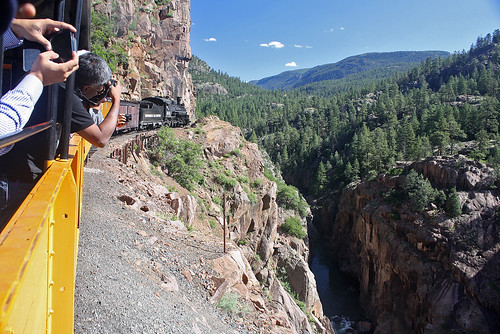 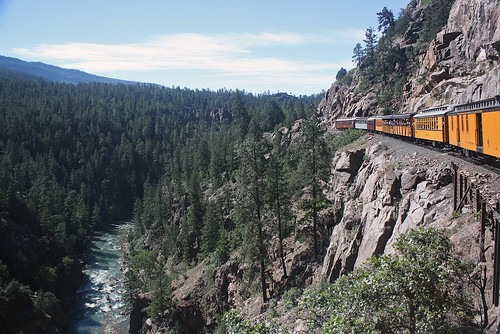 The San Juan Mountains, through which the railroad passes, are the largest range within the Colorado Rockies, with elevations as high as 14,000 ft. Within them lies the San Juan National Forest, an absolute haven for hikers! A paucity of roads in the area means that often times the railroad is the only way by which to access the trailheads. Needleton is one of three such flag stops en route, where hikers can request to be dropped off or picked up. Our train, in fact, has a boxcar up front, chock-full of backpacks! It promises to be a longish halt here. 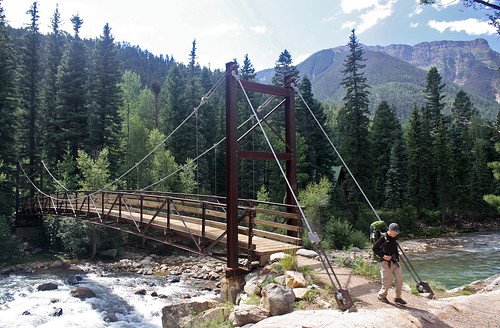 Arrival at Silverton is only a few minutes late, and the change in elevation is felt almost immediately upon stepping off the carriage. The train halts there for about 2 hours, giving one plenty of time to walk around, get a bite to eat or something tasty to sip on. At 9318 feet though, you probably don’t want to exert yourself a lot, so its a good thing the little town, with a population of only 600, is at least true to its Colorado roots – there are a handful of micro-breweries within the historic centre, and we pick Avalanche Brewing Co., literally a stone’s throw away from the station.

Silverton, seemingly named after its large silver mining operation, was incorporated in the late 19th-century and shot to prominence with the arrival of the railway. It was also the junction for three more lines that led to nearby coal mines. Often referred to as the Heart of a Mining Empire, Silverton and its adjoining mines, fed the fortunes of the Denver & Rio Grande Western for decades. 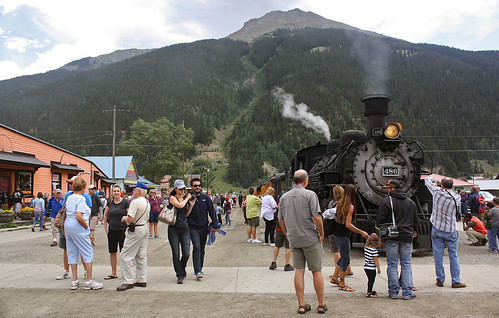 On the journey back from Silverton, locomotive #436 has little work to do as its mostly downhill to Durango. Having pretty much been on our toes, capturing every square foot of the ascent, we too can sit back, relax and take it all in!

And no better time than the present to raise a toast to the absolutely splendid alpine channel that is the Animas River. A tributary of the San Juan River, and part of the Colorado River system, it still holds the distinction of being the last free-flowing river in the United States… 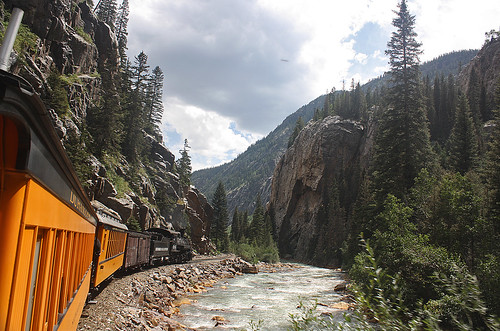 The route back to Albuquerque (213-miles southeast of Durango) is another stunning one – par for the course, by now, for these parts. Only this time, we have Supermoon to look forward to – one that’s sure to provide surreal illumination to the already magnificent Southwest! 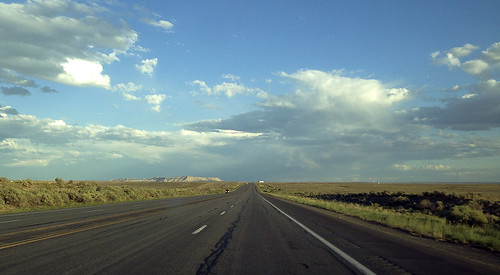 A full set of images from the Four Corners region and the Durango & Silverton railroad are available on my Flickr.

2 thoughts on “Four Corners, and a Bounty of Steam”