It’s quite foggy and fairly nippy by the time we reach the Azimut Hotel, and we’re heralded in the right direction (the hotel’s older wing is being renovated) by a young Chinese couple, who also happen to be staying there. In the lobby, Asians outnumber locals, and barring a group of very young Russian gymnasts, you could be forgiven for thinking you were in Beijing or Harbin, as the case may be.

The hotel, a short 10-min walk from Vladivostok’s main train station, is located in a residential area, built into the side of a bluff overlooking Amursky Bay. A good choice for anyone arriving in the city by rail, sea or air, at $125 a night for a double room, it is also excellent value for money. That rate includes a huge spread for breakfast and some of the fastest free WiFi I have ever used!

From our bay-facing balcony, we watch as another great day comes to an end. The hotel’s own restaurant is well appointed and reasonable too, and the combination of a chilled Asahi and Beef Stroganoff couldn’t taste any better. 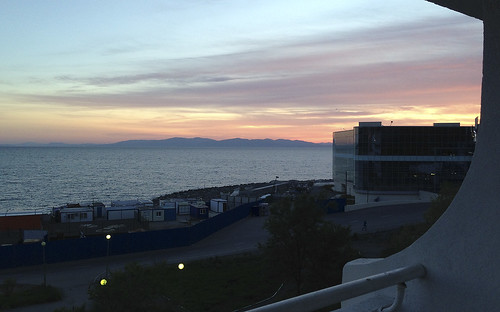 The foggy night has given way to a stunning morning, with clear skies, a strong sun, and the mercury expected to reach the 24C mark later in the day. We have truly been blessed with good weather throughout our trip!

We make our way along the waterfront to Vladivostok’s funicular (the only other such operation in the country apparently, apart from Sochi!), and pay a measly 9 RUB for a short journey to the top. The city’s most visited overlook lies a few minutes away, and a series of stairways and passages gets you there. What we encounter there is a truly magnificent vista, dominated by the striking Golden Horn Bridge; the city’s sprawling harbour, and the many hillocks, bays and islands that surround it. For anyone who would care to understand it, the geography and topography of the greater Vladivostok area finally put into context! A city who’s name literally means “to conquer the east”. 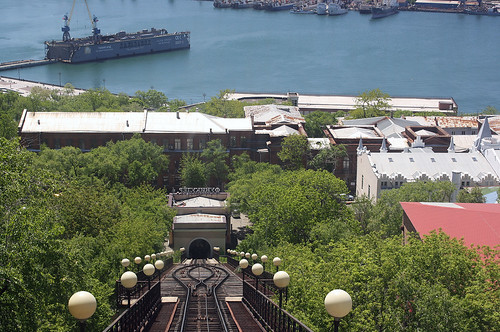 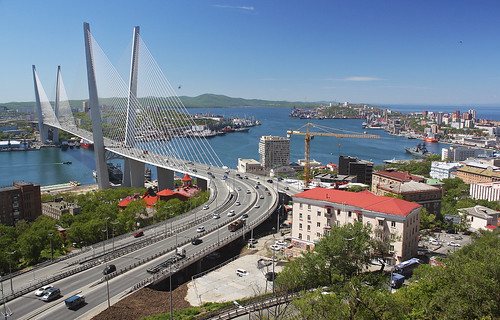 Walking along ul. Svetlanskaya, we head towards Ploschad Bortsov Revolutsy, Vladivostok’s central square. One of the city’s main arteries, Svetlanskaya is lined with turn of the 20th-century Tsarist-era buildings, each one beautifully preserved, often, gaily painted. 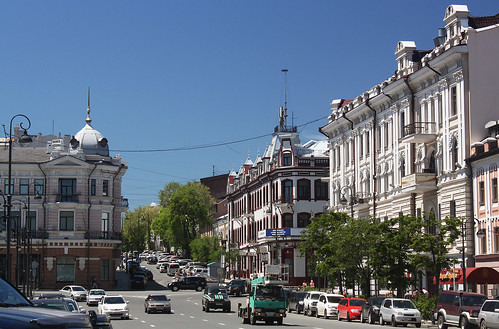 Along the street, Hyundai and Daewoo-built city buses ply their routes, and right-hand drive Japanese used cars jostle for space with the more conventional left-hand drive imports. In a city where signs are often bilingual (Cyrillic and Mandarin) and Japanese restaurants far outnumber Russian ones, Vladivostok definitely has a unique vibe to it. Physically distant from Moscow it certainly is, but culturally and ideologically too, it probably could not be more removed. 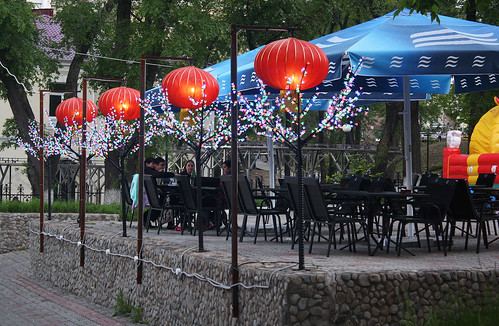 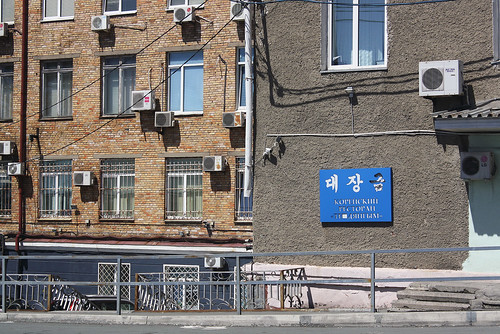 Ploschad Bortsov Revolutsy is a wide plaza adjacent to ul. Svetlanskaya, who’s centrepiece is a pair of imposing statues, a memorial to the fighters who brought this remote corner of the country under Bolshevik control. On most days with bearable weather, you’re more than likely to stumble upon a colourful pop-up market, hosting everything from fishmongers to florists; handicraft vendors to apparel merchants. It’s a frenzy of activity all around, and on a sunny day like today, a great place to soak in a truly local flavour. Try as hard as you may though, bargaining is not par for the course here! 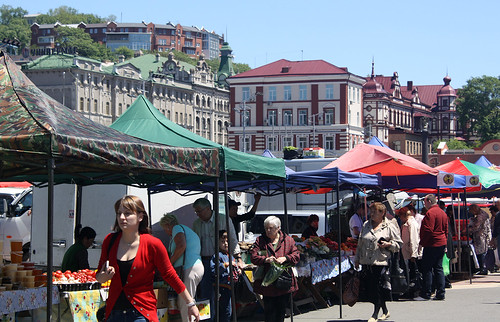 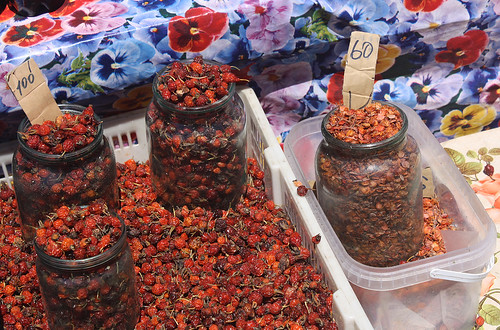 A short walk from the square, along the waterfront, lies the C-56 submarine museum. It doesn’t take long to see and doesn’t cost an arm and a leg either. If anything, you’re likely to come away with several fun snaps, and a basic understanding of the city’s role as a strategic naval base over the years. 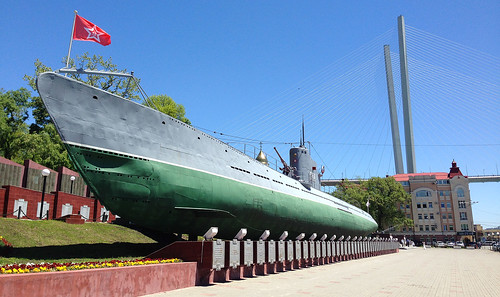 Away from the all the docks, on the western end of ul. Svetlanskaya lies Sportivnaya Harbour, the city’s most popular waterfront recreational area. The aroma of Shashlik draws us into a cafe, one of many that line the promenade here, and we proceed to order a late lunch of grilled chicken-wings and some chilled piva. 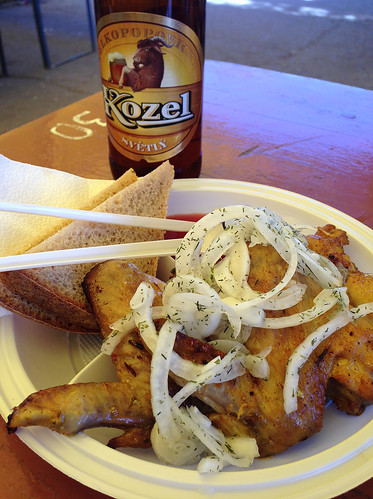 A little beach, set against the backdrop of a marina; a giant ferris wheel, part of an amusement park for kids, and a wide plaza with fountains, complete the rest of the scene. It’s a great place to catch some sun and people-watch as you do so. Paddle-boating and swimming (surprisingly, the water’s not that cold!) are some of the other options, if you’re feeling a little more adventurous. 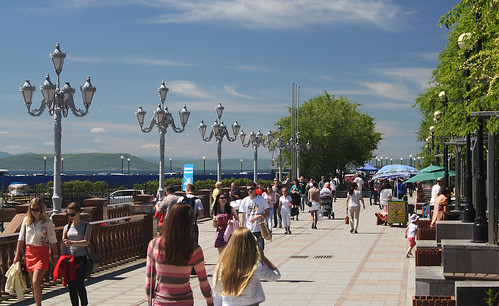 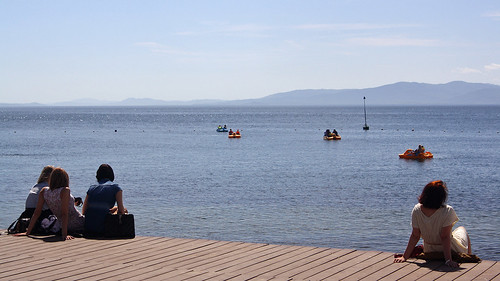 At the end of the promenade, on the north side of the harbour, lies a decommissioned artillery battery perched on a hill. Now the site of the Vladivostok Fortress Museum, it was one of 16 such forts built to protect the city against Japanese invasion. An absolute must see, the outdoor exhibits alone – a motley collection of vintage cannons, anti-aircraft guns, missile launchers and armoured personal carriers, to name a few – will make it well worth your while! Even better, most exhibits are bilingual (Cyrillic and English), and on the whole, the museum is well curated and tended to. 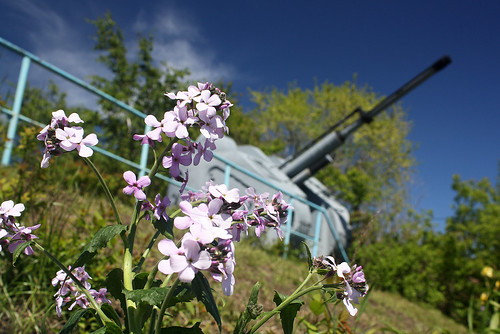 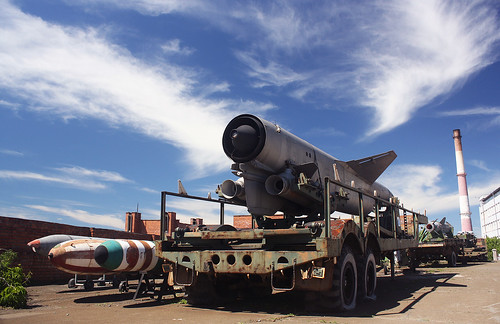 Ever since the Russky island bridge was completed in time for the 2012 APEC summit, the car ferries have stopped plying. Your options now are to board a ferry towards Popov or Peschanyy, islands located in Amursky Bay. Just make sure you get on one that’s actually returning to Vladivostok the same day! Then sit back and enjoy the ride out into the Sea of Japan, past Vladivostok’s busy container-studded port, its row of naval ships, and of course, the 2 new bridges that have given the city even more character and definition in recent years.

A one-way ticket to any of the neighbouring islands sets you back only 54 RUB, and provides one the opportunity to not only take in the sights but also to mingle with the locals. Despite the difference in language, most will be quick to point out that the bridge to Russky Island is the longest cable-stayed bridge in the world! In the rare instance that you’re getting bored, work on getting your coordinates right vis-a-vis the location of North Korea, China and Japan! 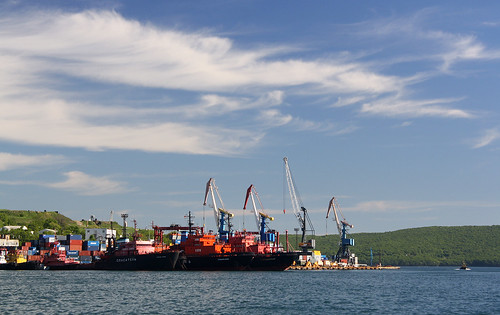 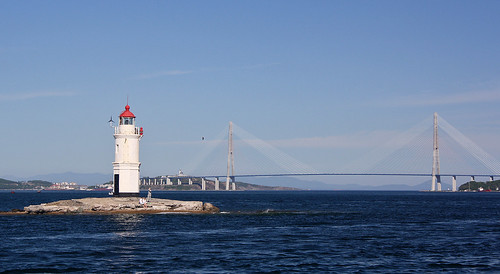 For its steep streets, bays, and now, its suspension bridges, Vladivostok is often referred to as Russia’s San Francisco. Its relatively tall residential towers, set against hillsides, and the occasional fog, could easily liken it to Hong Kong. And of course, its bustling harbour and busy waterways evoke images of Istanbul, after whom its Golden Horn Bay is named. The similarities are plenty, no doubt, but Vladivostok is also a city with its own strong identity, one that warrants more than just a passing glance. On our part, we’re certainly glad we decided to stay the extra day and do the place some justice.

Tomorrow, I fly back to New York, via Moscow. The flying time from here to Moscow is about 136 hours less than it took the Rossiya to cover the same distance! A lot quicker by air, for sure, but very little to gain from it 😉

2 thoughts on “Rossiya Diaries: To Conquer the East”