On the 22nd of May 2008, the city of New York, amidst much fanfare, fireworks and a Navy fly past, celebrated the 125th Birthday of Brooklyn Bridge. To coincide with the event, the 4th annual Tour De Brooklyn was moved ahead by a few weeks. And befitting such an occasion was the location chosen for the flag off – on Water St right under the glorious bridge itself! 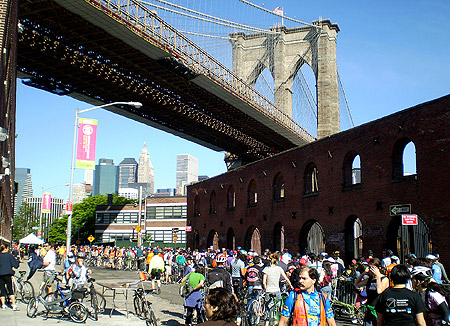 The event recorded the largest turnout to date – topping out at a little over 2000 riders. While not nearly as large as the 5 Borough event or even the Tour De Bronx for that matter, the enthusiasm amongst the riders more than made up for the numbers. And at a cool 24C (80F), they couldn’t have asked for better weather to ride in.

Flagged off personally by the Brooklyn Borough President, the route led out of DUMBO, followed the BQE for a while along the waterfront and then turned east on to Atlantic Avenue – one of the busiest arteries in Brooklyn. And that realisation only dawned when we rode past the busy intersection with Flatbush Av – another major thoroughfare in Brooklyn. For a change, cars waited while bikes sailed through!

After about a mile more on Atlantic, we headed south along Washington Ave through the neighbourhood of Prospect Heights. Half a mile later, the very imposing Beaux-Arts building of the Brooklyn Museum came into view.

Currently playing host to Japanese artist Takashi Murakami’s exhibit, the museum is one of the oldest and largest art museums in the US and home to a renowned collection of Egyptian masterpieces. An added bonus to visiting the museum is its close proximity to Prospect Park and the Brooklyn Botanical Gardens.

From there on, we headed east yet again on the aptly named Eastern Parkway. A gorgeous tree lined boulevard (an avenue in the true sense of the word!) with traffic lanes in the middle flanked by well shaded, wide pedestrian plazas and serene service lanes on the outside lined by old row houses. We were riding through the very charming neighbourhood of Crown Heights but you could be forgiven for thinking you were in Lutyens Delhi! 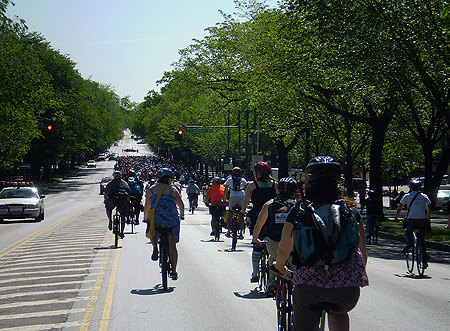 The Tour attracted people from all age groups and machines of all shapes and sizes. Road bikes, mountain bikes, hybrids, tandems, trailers and recumbents. But the star of them all was this little black kid on his puny little bike who, as John described best, always managed to leave his mother behind in the dust! 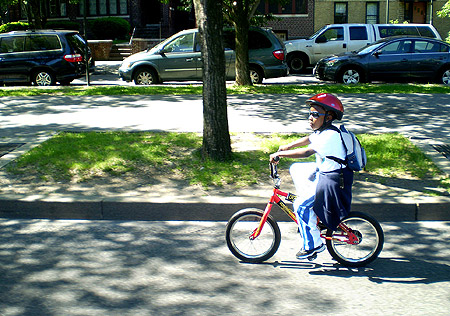 At 18 miles, the length of the tour has been kept constant each year but the route itself keeps changing. And this year was no different. While we were disappointed not being able to ride through Prospect Park, we were in for a bit of a treat ahead. After leaving behind Crown Heights and passing through the somewhat rough neighbourhoods of East New York & Broadway Junction, we turned into the Cemetery of the Evergreens.

The 159 year old cemetery spans 225 acres and is divided between the boroughs of Brooklyn and Queens. A closer inspection of the route map revealed that we had in fact sneaked into Queens! But never mind all of that – the cemetery is a destination in its own right. Rolling hills, sloping meadows and flowering shrubs give it a park like feel and the stunning workmanship on the tombstones and mausoleums are a sight to behold. It could best be described as a ride through a beautifully landscaped sculpture park minus the crowds!

On exiting the cemetery, we headed north-west along Knickerbocker Ave through the neighbourhood of Bushwick calling on Maria Hernandez Park for our first and only rest stop. 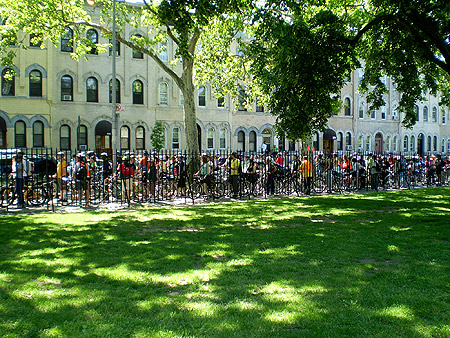 A group of people in a seemingly informal assembly (there was no police presence to suggest otherwise) knelt down to offer their respect while men in uniform stood closer to the scene of action – a makeshift temple of sorts – where men dressed in a religious attire went about their business. To the passer-by, it was all very confusing of course but reason enough to slow down, if not stop. Some suggested it was a Polish ceremony of some kind (there is a large Polish populace in those parts), others thought it was a ceremony honouring sailors (Fleet Week was on at the time) but no one really knew exactly what it was.

We were closer to the waterfront now and the new route included a ride through the Navy Yards. ‘First time ever’ it claimed, but I had already ridden through it only a few weekends before 😉 No complaints though – if nothing else, at least the light conditions were a lot more favourable this time!

Some 18 miles and 3 hours later, the tour ended in Cadman Plaza Park, right by the Brooklyn Bridge. While we topped up our water bottles, the bikes took in some much needed shade and relaxation. 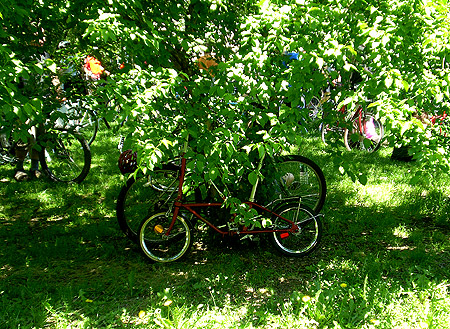 At a rather lethargic pace of 6 mph one could argue that it wasn’t much of a calorie burner. But there’s no taking away from that rare chance to see parts of a rich and diverse borough such as Brooklyn, that one would otherwise almost never get to see 🙂