Three consecutive days with highs in the mid 30s (~ 100 F) is considered a ‘heat wave’ in NYC. Laughable if you come from India but not so humorous when you take into account how sudden the transition was. From a low of 14C (60F) one day to a high of 36C (97F) the next! Add to that a humidity index of over 70% and you’ve got the best of Indian summer scorching down at you!

So it was with some trepidation that I set off from home on the second Sunday of June to join 500 other bicyclists on the first annual Tour De Queens. The venue: Flushing Meadows-Corona Park, right by the Queens Museum of Art and in the shadow of Arthur Ashe Stadium, where tour marshals braced themselves to lead riders on a 20 mile route through the largest borough of NYC.

The route would take riders through the western perimeter of Queens along waterfront greenways, parks and a gamut of neighbourhoods ranging from residential to historic to the industrial, finally ending back where we began. Ten neighbourhoods in all – most of which I had never seen before!

The tour was flagged off at 0930 and first headed north past Shea Stadium, over the Grand Central parkway, turning west onto Flushing Bay Promenade, where bikers got the rare chance to ride along the World’s Fair Marina with views of LaGuardia airport (LGA) in the distance.

I use the word ‘rare’ because not to many people know about the existence of a marina in these parts and the few that do, were probably unaware of the recent addition of a beautiful 1.4 mile long promenade / greenway along the waterfront. In 1964, New York hosted its third ‘World’s Fair‘ and it was held at Flushing Meadows-Corona Park. A few relics remain from the day – the Unisphere (pic ahead), the State Pavilions and the Marina.

Crossing over the Grand Central Parkway one last time, we entered the very peaceful looking neighbourhood of East Elmhurst. But as is often the case, looks can be deceptive! The calmness is shattered ever so often by noisy air traffic from nearby LGA. That coupled with relatively scant transit access would make this neighbourhood a poor choice for anyone looking to buy or rent. But all of that is somewhat made up by pretty homes sitting on spacious plots complete with their own lawns.

Biking along Ditmars Blvd, we crossed into Steinway – the northernmost section of Astoria. 20th Ave was next and strangely, it seemed all to familiar to me. It took me a few minutes to realise that it had been the venue for my driving test last October! The heavily fortified Con Edison plant nearby confirmed that suspicion!

On to more familiar areas now as we headed south into Astoria – one of the oldest settled neighbourhoods in Queens and also one of my favourite! The iconic Hells Gate bridge showed up soon enough and signaled the arrival of Astoria Park – my first rest stop on the Five Boro Tour in May.

Call it good timing or luck, a Boston bound Amtrak train trundled over the bridge just as we crossed under it. But worry not; I won’t bore you with the picture 😉 Instead I will show you one of the Triborough Bridge, where a beautiful old sports car parked along the water’s edge, and clear views of the northern Manhattan skyline made for a perfect shot. 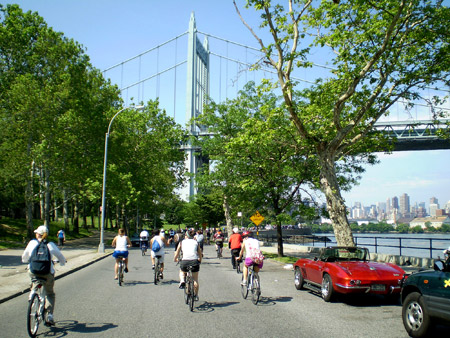 Following Vernon Blvd along the East River we entered Long Island City (my last hood) and just short of the Queensboro Bridge, made a much needed rest stop at Queens Bridge Park. Corn Muffins, Bananas, energy bars, lots of water and some much needed shade were just what the doc had ordered and the 20 minute break gave some much needed respite from the extreme weather that day. 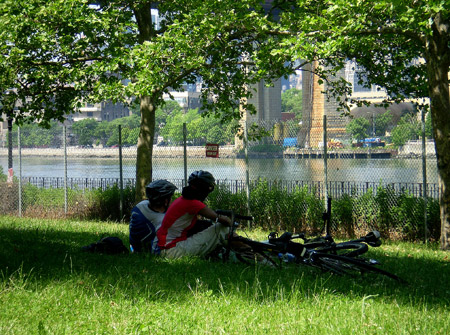 We continued south on Vernon, turning east momentarily on 48th Ave to ride, for one last time, along the Queens waterfront, with fabulous views of the Manhattan skyline for company. 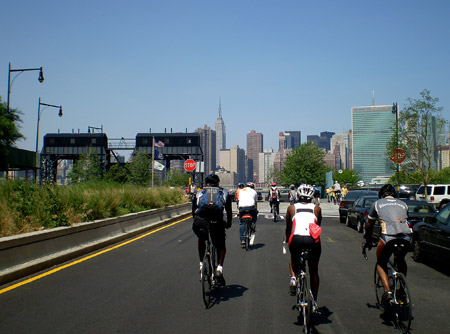 On to the more industrial neighbourhood of Hunters Point (separated from Brooklyn by the Newtown Creek), where we headed east along Borden Ave crossing the Long Island Rail Road (LIRR) tracks just past the Pulaski Bridge. My first ever rail crossing on a bike 😉

Started in the 19th century, the Newtown Creek was a busy commercial waterway and gave rise to several industries along its 3.5 mile route between Queens and Brooklyn. Although very few vessels ply its waters today, the industries and their resulting neighbourhoods remain. The next such neighbourhood was Maspeth and to reach it we left Borden Ave behind, biking along 56th Rd and following the alignment of the little used Montauk freight branch of the LIRR.

We were biking along a route we would almost certainly never get to see again – one which was full of old industry and oozing with history. The most endearing image for me (sadly no pic!) was an old abandoned gas station with those old style pumps and even older meters which had probably stopped ticking sometime in the 70s or 80s – when gas prices were a little over a dollar a gallon!

The much more residential neighbourhood of Middle Village was next and boasted some of the most undulating terrain along our route. Unfortunately for us bikers, the frequent ‘ups’ and the all to scarce ‘downs’ had to be tackled around noon – when heat and humidity were at their very best! At one intersection, which was thoughtfully (!) planned on one of the steepest ascents in the area, there was bunching and we had to wait it out for what seemed like eternity. But as with most other neighbourhoods along our route, the residents of Middle Village were out in large numbers, to greet us with garden hoses and cyclists took turns reveling in the cold spray! 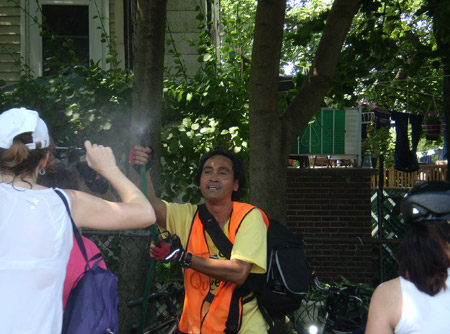 Continuing east for a couple of miles more and the neighbourhoods only seemed to get prettier. Rego Park was next – the REGO in the park expanding to REal GOod Construction Company – which was credited with developing the area in the 20’s. Originally inhabited by Dutch & German farmers, the neighbourhood today is host to a large Jewish, Russian and East European population. A section of Rego Park that we rode through, called ‘Crescents’, sports old colonial homes complete with slate roofs – some of the prettiest houses I’ve seen in the city.

Of the four outer boroughs of NYC, Brooklyn is the one credited with having some of the prettiest neighbourhoods. True to some extent but not until you start adding up the ones in Queens. Leaving aside the ones mentioned on this page, the prettiest I had seen up to that point, and recently so, was Kew Gardens. While our route for the day wouldn’t take us through there, it did have one last surprise in store for us – Forest Hills Gardens. Quite easily THE prettiest neighbourhood I have seen in all of New York City!

You could be forgiven for believing we were riding through a state park but Forest Hills Gardens is true to its name. All along our route there were thoughtful little signs posted, informing us which neighbourhood we were passing through and a little trivia about each. Here, in Forest Hills Gardens there was one sign that said it best, “Yes, you’re still in Queens!”

Physically separated by Queens Blvd from the somewhat larger neighbourhood of similar sounding Forest Hills, this 142 acre development is one of the oldest planned communities in the US. It boasts Georgian and Tudor town houses modeled after an English hamlet, connected by private streets, shaded by a generous green cover and dotted by manicured lawns. I could go on rambling about it but we were approaching the last leg of our tour and I might as well finish the last part of this blog without torturing you further 😉

Corona was the last neighbourhood we would pass through that day and the area itself is separated from the Flushing Meadows-Corona Park by the Long Island Expressway (LIE). As we bunched up to gain access to the pedestrian over pass, the scene couldn’t have been more apt. Cyclists swarming through a gas station where gas prices were displayed at their all time high and a perfectly placed Stop sign which sent home the message loud and clear – Ditch your cars! Sustainable transport is here to stay!!

Minutes later, we were back where we began and the chance to snap up a city icon from the 60s – the Unisphere! 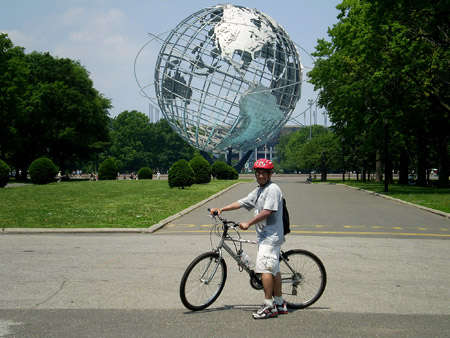 I was totally exhausted, steaming and drenched with sweat – the toughest 20 miles I had ever done! But no matter how bad the weather sucked that day, the borough of Queens shone through like never before! Admittedly there were fewer riders than in Brooklyn but for a first tour, it was extremely well organised with a wonderfully planned route through one of the most fascinating boroughs of NYC. And I was proud to be a resident of it! 🙂