Sunday the 4th of May, 45 past noon, Staten Island, NY: A moment of immense physical and emotional accomplishment. I had completed the 42 mile (67 km) Five Borough Bike Tour. I was well and truly stoked! 🙂

4 hours and 45 minutes earlier: The northwest corner of Duane St and Church St in Manhattan – I wait for the flag off along with 29,999 other cyclists. We are four blocks away from the starting line and the mass of bikers behind me stretches for another 15 blocks south. I don’t feel so bad any more for having awoken a little past 5 that morning!

From a humble beginning of 250 participants in ’77, the 5 Boro ride has come a long way. Today it is the second largest cycling event in North America (Montreal takes top honours) and demands the closure of major streets, bridges and highways across New York City on the first Sunday, every May.

The tour goes up Sixth Avenue (or Avenue of the Americas) for the first 4 miles and the landmark Jefferson Market Clock Tower signaled the arrival of my old (and first) neighbourhood in the city – Greenwich Village!

With so many thousand cyclists riding together, bunching is inevitable in the initial stages and we faced our first such bottleneck near the entry to Central Park. But a live Jazz band performing for us at a bus shelter more than made up for the wait! 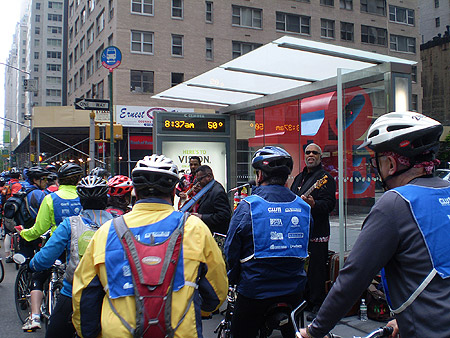 The front of the tour maintains a brisk pace of 15 mph (the more competitive and often aggressive road bikes) and a more leisurely pace of 6 mph brings up the rear. In between are cyclists and cycles of every hue, shape and colour but the one which easily drew the most admiration was this one I spotted riding through Central Park. A father leading 3 kids and a wagon in tow – a ‘cycle train’ if you will!

North of Central Park, at 110 St, 7th avenue resumes under the guise of Adam Clayton Powell Jr Boulevard. We would ride north on it for a little over a mile before turning east towards the Madison Avenue Bridge which would provide us with a surprisingly short detour into the Bronx – the least represented of all 5 boroughs on the tour! 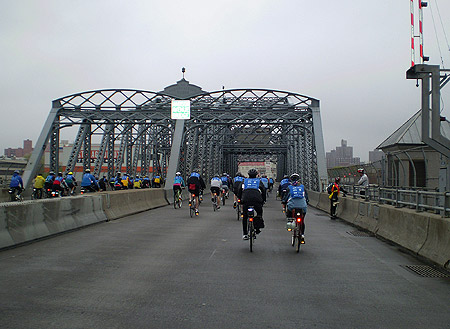 We crossed back into Manhattan from the Bronx using the Third Avenue Bridge and in doing so went across the Harlem River twice that morning – in fairly quick succession.

The southbound lanes of the FDR Drive had been closed to traffic and this was the first of two major highways that were shut down for the tour that day. It was a surreal feeling, having one side of the highway all to ourselves, with regular traffic passing on the opposite side.

The first rest area was at 116th street along the FDR – a little over 10 miles into our ride. But I prodded on regardless – trying not to be daunted by the fact that the next one was at least 7 miles away!

Some sections of the FDR drive are straddled by parks and buildings and with the exception of light streaming through the supports on the east side, it gives one the feeling of being inside a tunnel. Tunnels invariably symbolise the dark and the unknown and the moment we entered this one, excited screams from fellow bikers were all to reminiscent of mountain train journeys in India – passengers screaming for effect every time a tunnel is passed!

We would cross 2 rivers, a creek and the Atlantic Ocean that day and that meant using 5 different bridges – 2 of them major! The first major one was the Queensboro Bridge over the East River and that would take us into my ‘home borough’ of Queens!

There were at least a few injuries reported during the tour that day and one man even suffered a heart attack – on this very bridge! He was revived by fellow cyclists initially before the paramedics got to him. Thankfully, there were no untoward incidents on my ride up, and the rest of our passage through 21st Street in Queens, leading up to the 2nd rest area, was uneventful to.

I was determined to make it to Astoria Park that morning as the organisers dock a part of your route (3 miles) if you arrive in Queens past a certain time. I managed to make it alright and the extra push certainly felt worth my while when I discovered that Astoria Park was right by the storied Hells Gate Bridge and the East River.

A 15 minute break and a lot of fluids were enough to get me back on the saddle, and soon I was on my way again, heading south on 14th street, through Astoria and Long Island City, towards borough #4 – Brooklyn! The Newtown Creek which separates Queens from Brooklyn was crossed via the Pulaski Bridge and soon I was riding familiar territory again. Only the day before, I had been on a tour of Brooklyn’s proposed Greenway and we took the same route through Greenpoint and Williamsburg to arrive at the DUMBO waterfront where a wonderful panorama awaited me. 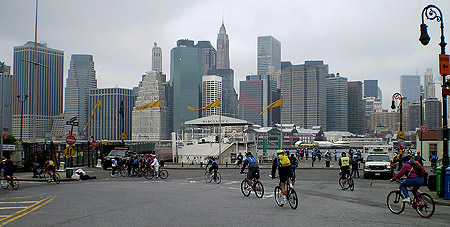 The second major highway closure for the day was the Brooklyn-Queens Expressway or the BQE. It was the most soothing sight to watch a sea of bikers taking over a highway the size of BQE! Am not sure many of those passing motorists would have agreed – but who cares about them anyway?!! 😉 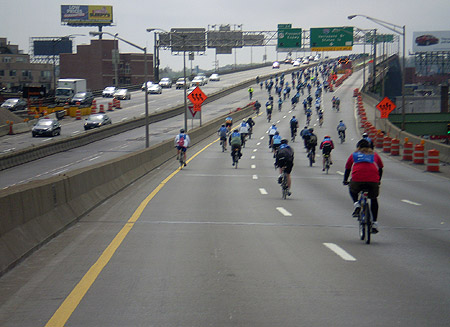 Riding the 3 odd miles on the BQE was probably the toughest part of the ride for me. The sun was out in full force by then, my backside was completely sore and the concrete surface of the highway didn’t help matters much. So I was much relieved when we exited onto the Belt Parkway. A smooth asphalt surface to provide some succour to the behind and a cool sea breeze coupled with some gorgeous views of New York Bay and the Verrazano-Narrows Bridge.

As we’d say back home, ‘Staten Island ab door nahin’ (Staten Island isn’t far away now). Our final destination seemed tantalizingly close but we still had a 2.6 mile long bridge to cross which included a steep and continuous ascent of a mile and a half. So before that final push, a rest stop was in order – my third and last for the day, the second having been taken somewhere in Brooklyn. Each of the rest areas I stopped at were beautifully laid out and very well organised with volunteers doling out bananas, oranges, energy bars and fluids – without the need to even leave your bike for a second. And most importantly for me, toilets were abundant! 😉

The Verrazano-Narrows Bridge is the largest suspension bridge in the Americas but unfortunately provides no access to bicycles or pedestrians. Except on the 1st Sunday of May every year where almost 30,000 bicyclists use it to cross into Staten Island. Its the upper deck that enjoys the best views around but as the saying goes, ‘beggars can’t be choosers’ so without so much as a fuss, we made do with the lower deck! 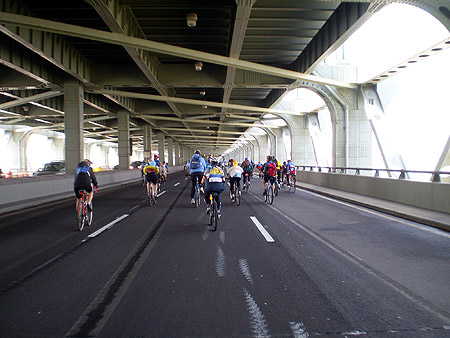 Mile 39 marks the end of the bridge and an entry into the last of 5 boroughs – Staten Island. Fort Wadsworth Park on Staten Island – just off the expressway – is where the Tour Festival is held and arriving there could easily give one the false impression that the ride was finally complete.

Far from it in fact – we still had 3 more miles to go to the St.George Ferry Terminal where we would hop on a ferry bound for Manhattan. So I made the customary stop at the festival, picked up an official tour tee-shirt and after resisting all temptation from those barbecue stalls, rode out the last 3 miles, stopping on occasion to soak up views of the bay on what had surprisingly turned out to be a picture perfect day (rhymes!). 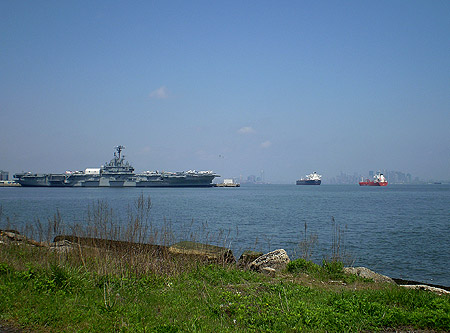 2:30 pm, Battery Park, Manhattan: I’m back where it all began. The wheels have turned a few thousand times and yet only a full circle completed!

The sylvan setting provides the ideal spot for a bit of wind down and introspection. I can take a bow – I’ve officially experienced the five borough high!