May is ‘Bike Month NYC’ and the official start of the cycling season. But the first weekend of May also hosts the largest urban recreation event in the US – the 5 Borough Bike Tour – so most cyclists are out training a whole month before. And I was no exception! More on that in my next blog though. For this one, I focus on a relatively short but most interesting 10 mile ride in Brooklyn, the day before the tour.

The Brooklyn Greenway Initiative or BGI is a non profit body working towards building a continuous 14-mile long waterfront Greenway (or bike path) from Green Point to Bay Ridge in Brooklyn. Each year they conduct a tour of the route to showcase their plans and progress on the same. On Saturday, the 3rd of May, I joined a hundred other cyclists on that tour.

The Brooklyn waterfront is steeped in industrial and maritime history. Factories, warehouses, piers, docks and rail yards once dotted its thriving waterfront. A lot of that has obviously changed since. The industries have moved inland, the port traffic has moved away to New Jersey and the rail yards are long gone. What remains today is a mix of urban rejuvenation in some areas and complete decay in others.

But groups like the BGI hope to change all of that someday. Not only does their master plan include laying down bicycle paths but also building parks along the waterfront on abandoned piers like the one above. We were shown one such re-development – an abandoned rail yard which was recently turned into a park. Needless to say, the contrast was striking! 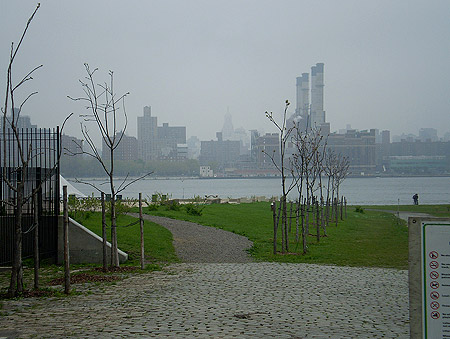 Greenpoint is Brooklyn’s northern most neighbourhood and, in my opinion, also its most understated. Century old brownstones line its streets, a large Polish population thrives there, and a vibrant graffiti culture still lives on. 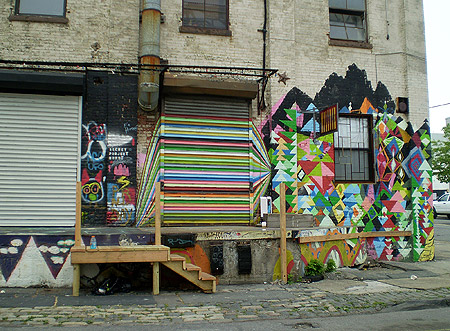 Greenpoint’s east-west streets are named alphabetically and as we continued south, it didn’t take long for the letter ‘I’ to show up. Needless to say, I was ecstatic! 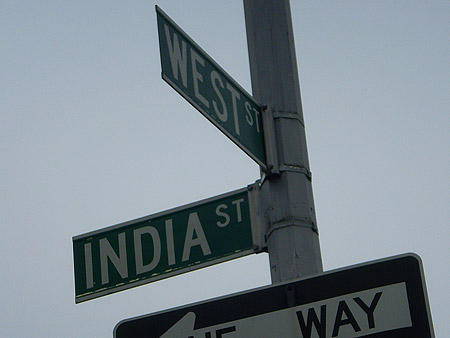 Since the 80s, Greenpoint has undergone extensive gentrification and rentals today match those of its more storied (and much over rated!) neighbour, Williamsburg. Outside of Hell’s Kitchen in Manhattan and Long Island City in Queens, it is Brooklyn’s waterfront that is witnessing hectic construction activity and Greenpoint is no exception. But somehow it manages to make even the most mundane construction projects seem like fun!

Williamsburg was next and the southern section of this hood is home to one of the largest Hassidic Jew populations in NYC. Closer to the Williamsburg Bridge and far removed from the hipster crowd that is synonymous with Williamsburg; the Hassid’s were out in full force – probably walking towards their local synagogue. Admittedly this was a sneaky one but the contrast was too much to resist!

We had the rare opportunity of riding through the Brooklyn Navy Yards – sandwiched between the Williamsburg and Manhattan Bridges in Wallabout Bay (sounds Aussie to me!). Founded in 1801, the yards were once America’s premier naval shipbuilding facility and at their peak of operation in WW2, employed 75000 people. Today they have been redeveloped as, and I quote, ‘A Modern Industrial Park in a Historical Setting’. One of its premier occupants is Steiner Studios – the largest and most sophisticated production facility outside of Hollywood! 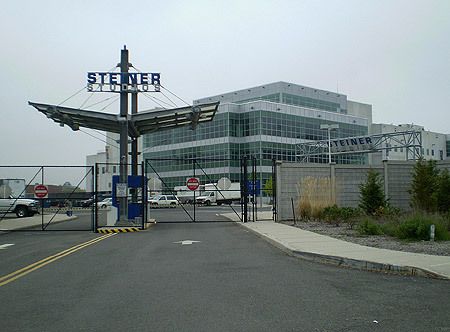 Only one ship repair company continues to operate today and despite all the new tenants, only a few thousand people work there. What remains is a graveyard of old repair docks, workshops, warehouses and rail tracks. Riding through it, you can’t help but wonder what it must have been like in its heyday. 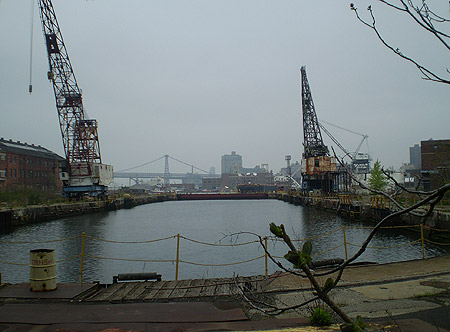 Vinegar Hill is a quaint historic neighbourhood in Brooklyn sandwiched between the Navy Yards and DUMBO. Cobble stone streets, 19th century homes and an undulating terrain make up this tiny 6 block neighbourhood. But its real claim to fame is Quarters A – the erstwhile Commandant’s home. Today this beautiful residence is no.24 Little Street and privately owned no less!

DUMBO or ‘Down Under Manhattan Bridge Overpass’ is one of the prettiest waterfront developments in Brooklyn overlooking both the Manhattan and Brooklyn bridges and of course the famed skyline. The factories and warehouses of yore have been transformed into over priced lofts and condominiums, which artists and yuppies call home today. The very scenic Empire Fulton Ferry State Park was our rest area for the day and on our approach to it, I was pleasantly surprised to see remnants of a once bustling rail freight network that have somehow managed to survive the test of time. 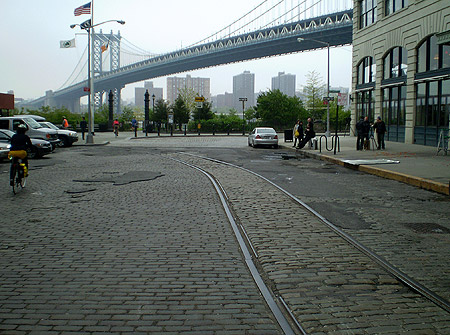 Although the proposed Greenway would continue south to Bay Ridge, our tour for the day would end in the Red Hook neighbourhood of Brooklyn. The last stop on the tour was at the Red Hook Marine Terminal. With most shipping activity having moved to the ports of Bayonne and Newark in NJ, Red Hook is one of only 2 active ports that remain in New York City (the other being on Staten Island). The mainstay of its operations is a container port but it also hosts the Brooklyn Cruise Terminal – home to ships from Carnival Cruise Lines including the RMS Queen Mary 2! But the star attraction in the harbour that day was unexpectedly, a submarine! It was waiting to be moved to the Intrepid Air-Sea Museum on the Hudson River once renovation is complete there.

The tour may have ended but Redhook’s little known treasures awaited us! It may have something to do with the fact that one of the city’s oldest car pounds (on Conover Street) is around the corner but gems such as this seemed to be common place in Red Hook. The last time I had seen this model of Willys was probably years ago in India – probably in an old railway workshop somewhere, faithfully serving as a staff car. It was nostalgia all over again!

At the end of Conover Street is a beautiful 94 year old wooden barge belonging to the erstwhile Lehigh Valley Railroad. It is part of the waterfront revival taking place in Brooklyn today and has been converted into a floating museum celebrating Brooklyn’s glorious industrial past.

Thanks largely to the Gowanus Expressway, Red Hook has, for awhile, been isolated from mainstream Brooklyn. But all that is changing slowly. Housed in a relic 19th century coffee warehouse, the city’s third Fairway Market opened in ’06 on a waterfront location by Beard Street Pier. With New York Water Taxi providing direct connectivity to Lower Manhattan and an outdoor cafe overlooking Staten Island, the Statue of Liberty and Jersey, the market is a destination in itself. The century old warehouses lining Van Brunt St and leading up to the pier are home to many artists today and an annual Waterfront Arts Festival is held in June each year. Red Hook also enjoys the distinction of being the only part of New York City with full frontal views of Lady Liberty! 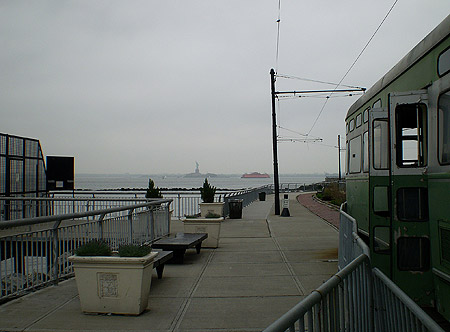 Little known to most New Yorkers (and to me till that morning!) is the fact that, not to long ago, there was a proposal to run a light rail (or trolley) service from Red Hook to downtown Brooklyn. What remains today is a small stretch of track, some poles holding the catenary (electric wires) in place and three trolley cars. Robert Diamond was the man credited with discovering an abandoned railway tunnel in Brooklyn in the 80s. That discovery prompted his efforts towards laying down a light rail line. He managed to garner enough interest in the project, but sadly not enough funds. The project eventually died in ’03.

Meanwhile, for all you IKEA starved New Yorkers, there is one more reason to visit Red Hook. And with the Swedes promising a FREE ferry service from Lower Manhattan, it isn’t going to be far either! I present to you a sneak peak at the Big Apple’s first IKEA store..coming soon to a neighbourhood near you 😉