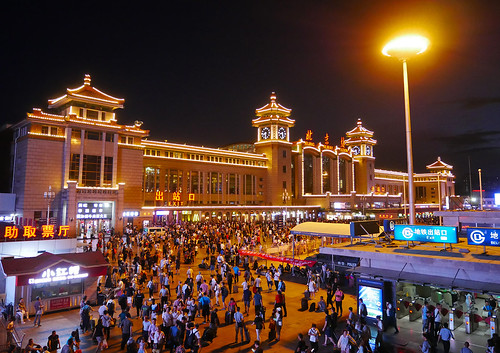 We have tickets on Train D705, the overnight to Shanghai, and while there is no first class on it, our “soft sleeper” cabin is plush enough for our taste, faux-wood paneling included. 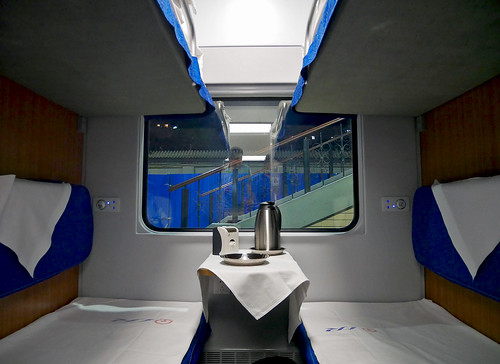 The D series of overnight sleepers comprise some of the newest trains in China, and although the upgrades might appear subtle at first, they add up pretty quickly, and are a definite step up from the more conventional Chinese carriages. We toast the shortest of our rail journeys with some Yanjing, a Beijing-based brewery that I’ve come to like, and then tuck in to our fluffy comforters for some shut-eye. 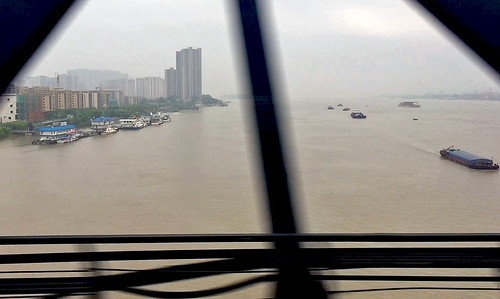 Nanjing, the country’s Capital during the Ming dynasty, lies along the Yangtze, some 300-km (186-miles) north of Shanghai. We pull in a few minutes late, and on the adjacent platform, there’s a medical team standing by, awaiting the arrival of Train D711, which, no doubt, has a sick passenger on board. The halt here is sufficient enough for us to step off the train briefly, only to be berated a minute later by a uniformed gent blowing his whistle, warning us to stay clear of the yellow line, as D711 approaches. 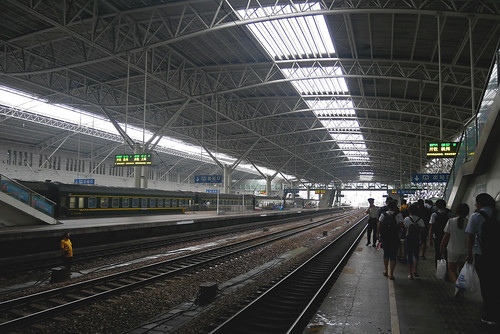 The southern reaches of Nanjing, a city of ~8-million, seem to blend into the northern suburbs of Shanghai, the world’s most populous city. With less than two hours to go to our destination, it begins to pour. Through rain streaming down the window pane, we spy one towering apartment complex after another, the ginormous cooling towers of a power plant, soaring construction cranes everywhere else, and a respite in the form of this beautiful, and seemingly unsung pagoda. 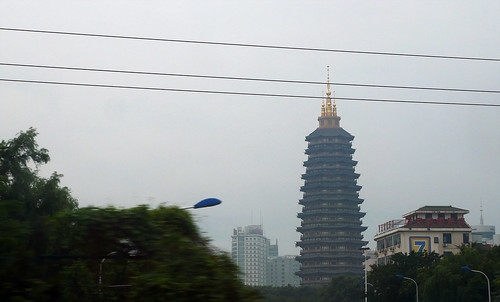 Our arrival into Shanghai Main is about ten-minutes late, and stepping out onto the station forecourt, its gloomier and soggier than we’d expected, the rain still coming down hard. A day hotel is what we desperately need. KD manages to spot a Holiday Inn in the distant cluster of buildings, and we make a beeline for it. 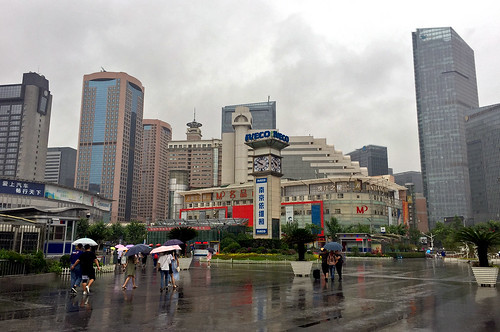 Rooms are thankfully available, and fairly reasonable too for a walk-up booking. Barely half an hour after arriving, we’re taking turns getting showered and drying out our clothes and shoes. And then begins the task of coordinating our ticket pick up for the onward journey to Lhasa. We’re scheduled to depart this evening from Shanghai, and all we have so far is a photograph of those coveted tickets. SS and VM will be joining us for that journey, and I notice an error on one of their tickets. I bring that to the attention of our agent, but she assures me that shouldn’t be a problem, and that she’ll let me know shortly when and where we should collect them.

Meanwhile, the rain has not let up, so there’s little else to do but ride the world’s largest transit system – for the three rail buffs amongst us, anyway. 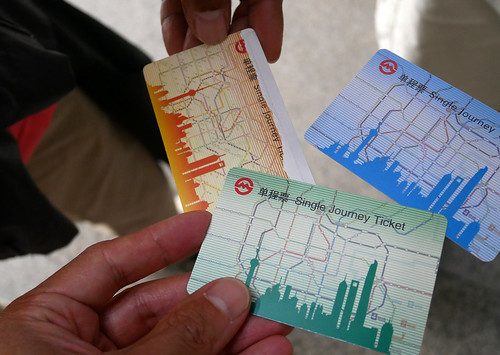 Shanghai boasts the largest Metro system in the world by route length – 676-km or 420-miles of it, to be precise. Its also home to the world’s fastest electric train, the Shanghai Maglev. It takes us over an hour, and a change of metro lines to get to the rather inconveniently located western terminal of the Maglev at Longyang Road. We buy return tickets to Pudong International, timed perfectly so we can ride the Maglev back when it operates at its top speed of 430 km/h (267 mph), covering the 30-km (19-mile) distance in a paltry 7-minutes and 20-seconds… 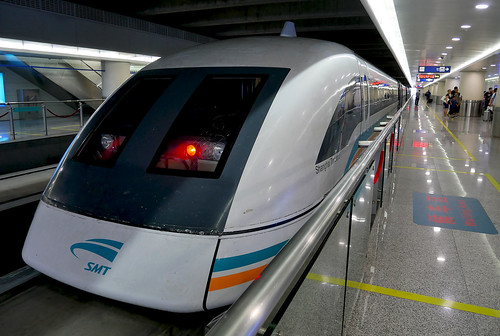 By the time we emerge from the caverns of the humongous metro system, the weather has cleared up. DG and JB, who’ve probably been lounging at the hotel all along, have made plans to meet us at The Bund, so we slowly make our way down one of the world’s most storied shopping streets, Nanjing Road. 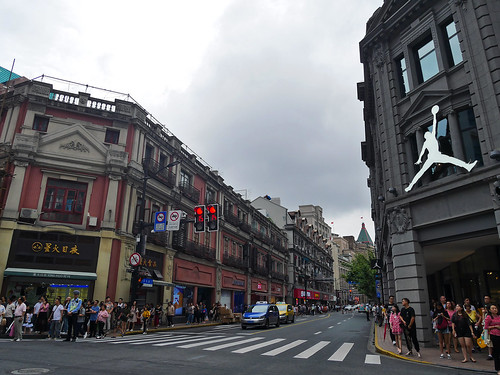 About to turn the corner from Nanjing Road, I receive a message from our agent. Meet by the bell tower on the South Square of Shanghai Main at 5:30, it says. Perfect! That gives us enough time to walk around The Bund and make our way back to collect the tickets, return to the hotel to shower and re-pack, and still be back at the station with plenty to spare for our scheduled departure.

The word bund refers to an embankment or levee, and the famous mile-long section of Zhongshan Road is precisely that. Renowned for its stellar collection of heritage buildings, ranging from Neoclassical to Art Deco, The Bund or Waitan is an absolute joy to walk along. Each one of its 52 landmarked edifices, from the HSBC building to the Custom House to the Cathay Hotel, a legend in its own right. There’s also plenty here that reminds me of the city I grew up in, Bombay. From the architectural styles, to the Sassoon family’s impact on both cities, to the fact that the very word bund finds mention in Bombay too – Apollo Bunder and Wadi Bunder to name a few. 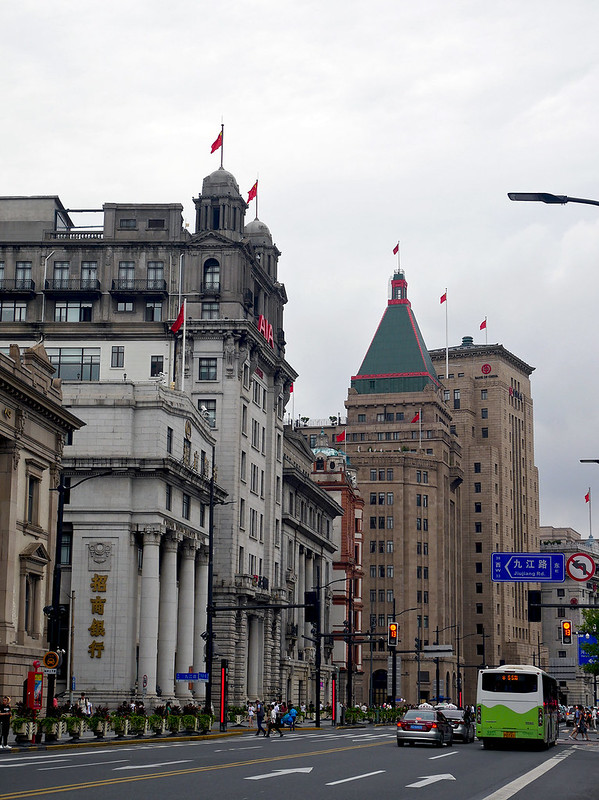 Across the Huangpu River, in complete contrast to The Bund, contemporary Shanghai is defined by its towering Pudong skyline, a showcase of China’s might, and of the city’s continued impact as the commercial and financial center of the country. 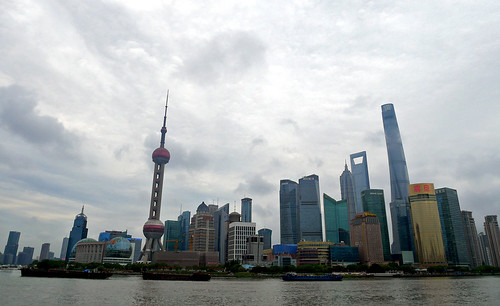 Well before the appointed time, SK, KD and I are standing by the bell tower, on the lookout for someone – it could be a man or woman – holding a sign with my name on it. 5:30 comes along. No signs of said individual. By 6 pm, we send KD back so he can get a head start on wrapping up at the hotel and have JB and DG do the same. 6:30, and still nothing. Frantic messages are exchanged with our agent but all we get is, they’ll be there shortly, don’t worry. A sad face emoji, if she’s being especially empathetic. The sun comes out, and a rainbow too, but it does nothing to cheer us up. Its 6:45 pm, and we’re quickly running out of time.

Just shy of 7 pm, I spot someone who’s clearly not on the lookout for us, but is retrieving a folded piece of paper from his pocket. SK and I home in on him. He turns out to be the man with our tickets, and speaks a few words of English too. Phew! Scrutinizing each one of them though, we realize they’ve issued an additional ticket – in their enthusiasm to correct the earlier error – and don’t have one for SK anymore. A look of dejection quickly replaces any semblance of joy we had a moment earlier. Panic and confusion ensue, and there’s plenty of it lost in translation. 7:05 pm, SS and VM show up, and in all that chaos, we hardly have a moment to greet them. The rest of our crew from the hotel starts trickling in too, with mine and SK’s bags in tow. 7:15 pm, and our man realizes, after finally having understood our quandary, that the ticket with SKs name on it should still exist, somewhere. It hasn’t in fact been discarded. He phones his buddy to go retrieve it, pressing him to do so as quickly as possible, since our train leaves in about 45-minutes, and we still have security and id checks to go through.

In Chinese culture, the number eight has long been regarded as lucky. So its no coincidence that Train Z164, to a destination as contentious as Lhasa, is scheduled to depart at 8:08 pm. And depart on time it does, with all seven of us on board, tickets firmly in hand, and a tasty beverage to savor the moment. We’re finally on our way to Tibet…

A full set of pics from our journey to Shanghai and time spent in Shanghai can be seen on my Flickr.

Next on Despatches from the Silk Road :: Train to the Roof of the World

2 thoughts on “Despatches from the Silk Road :: Suspense in Shanghai”