Beijing International Hotel, where we’re staying, is a short walk from Beijing Main Station. Having showered and bid farewell to HV – we’ll see him in a few days time – I browse the hotel literature for some late lunch options. There are a handful of restaurants to choose from, apparently, so I make my way to the most enticing of the lot, a rooftop revolving restaurant. Greeted warmly by a host at the elevator, I’m led by another to a table of my liking, and handed menus by a third. Only to be informed by a fourth – as I proceed to place my order – that they won’t be open till 5 pm. The puzzled look on my face couldn’t be more telling. Oh well, at least the views were worthwhile… 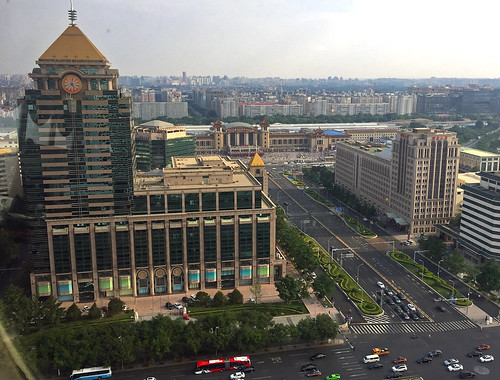 DG, who missed that entire interaction, joins me for lunch at Fu Lin Men, a hotel restaurant that, to our good fortune, is actually open at the unearthly hour of 4 pm. My dish of diced pork and peppers turns out to be pretty good, but the language barriers, carried over from the rooftop restaurant, persist.

Rounding up SK and JB, we head off towards Tiananmen, taking Line 2 of Beijing’s impressive Subway system, the second longest in the world by route mileage, after Shanghai. Emerging on to ground level at Qianmen station, we’re struck by the imposing sight of Zhengyangmen, a historic gatehouse, that once guarded the southern entry into the Inner City. 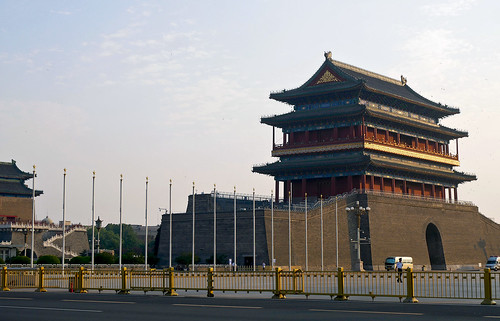 Security screenings follow – remember to carry your passport with you – and finally, after several detours getting around barriers, we’re allowed to enter the storied city square. As public squares go, Tiananmen, which literally translates to “gate of heavenly peace”, is an impressive one. Chock-full of people, monuments of note, and striking edifices all around, the square that has pretty much seen it all, is certainly a sight to behold at magic hour. 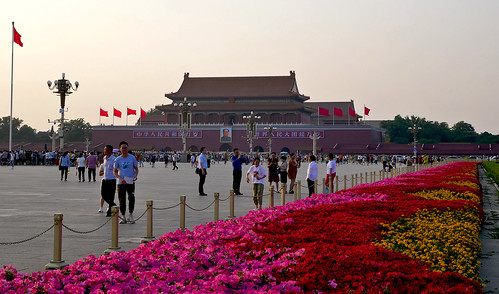 Attempting to get closer to the Monumental Entrance to the Forbidden City, Tiananmen‘s iconic backdrop, we’re shooed away by men in uniform. It seems everyone is being ushered behind a set of moveable barriers, that are quickly closing in on them. There’s obviously something going on – possibly a parade or performance about to get underway – but we haven’t the foggiest. One thing’s for sure, its put paid to our plans of walking through the Forbidden City.

Our last stop for the day would have been Jingshan Park, a former imperial garden located directly north of the Forbidden City, so we decide to head straight there. But finding a cab turns out to be an absolute chore. Ditto for an ATM that might accept one of our cards. With time and light quickly running out, we finally flag down a cabbie willing to take us there. He overcharges, of course, but we make it to the park before closing time, and up Jingshan or “prospect hill” too; the magnificent views from here more than making up for our earlier struggles. 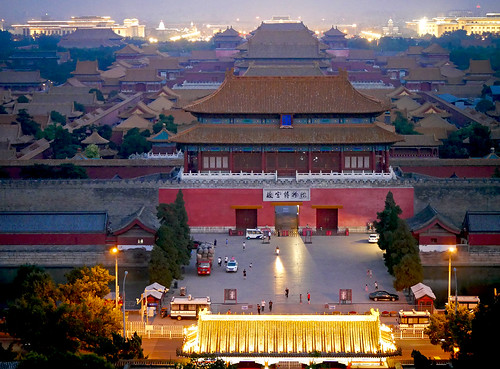 If getting a cab there was tough, getting one back to the hotel is next to impossible. In the absence of Uber, ride hailing services are provided by DiDi, a local company that only works in Mandarin, so if you’re not next to a subway line or a taxi stand, and are not familiar with the city’s gazillion bus routes, then you’re out of luck. Most visitors would simply have their hotel or host arrange a car for the day. Except us, of course. So after about an hour of wandering the streets in search of a taxi, we recruit SK to work his magic. Thanks to his newly made friend, and a little help from the translation app, we’re soon on our way to Beijing International Hotel.

I’m hell bent on a dinner of Peking Duck, but by the time I can get the concierge to call a few establishments on my list, and arrange a cab for to get me there, they’re all closed, or about to close. Worse still, every single one of the restaurants at the hotel have stopped serving too, and its only 10 pm. I’m flummoxed. Day one in Beijing has certainly not been without its challenges. Thankfully, dinner, although a far cry from Beijing’s legendary duck, turns out to be a success. Less than five-minutes from our hotel, along Chao Yang Men alley, lie a handful of hole-in-the-wall restaurants, all open fairly late, and at one of them, a dish of cumin-spiced mutton with peppers turns out to be the day’s winner. 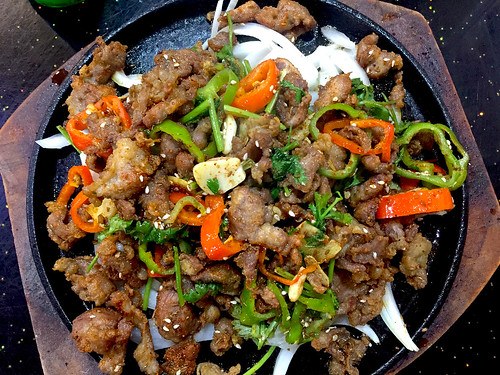 There’s so much of it, that I take leftovers back for DG, who’s arranged a nightcap with the boys at the hotel bar, which of course, is also about to close. KD has joined our ranks in Beijing this evening, and we hurriedly raise a toast to our upcoming journeys.

After a restful nights sleep, we head out at a reasonable hour to Beijing Main Station. We have tickets to collect for our evening departure, and once thats out of the way, we split up in search of breakfast. Congee, the staple breakfast dish in China, has been an easy sell for me thus far, and I make my way to the station food hall to try whats on offer there. 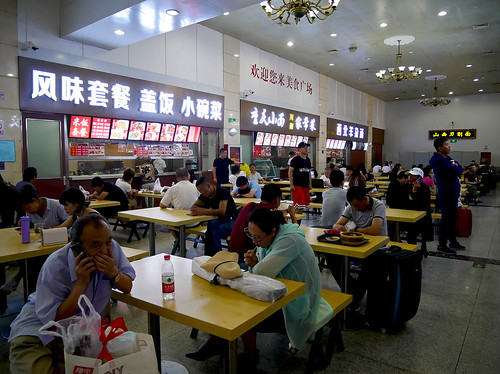 A little before noon, we’re on our way to Mutianyu, racing along an admirable highway system, thats yet another feather in the cap for the Chinese. Mutianyu lies ~70-km or 44-miles north of the Capital, and we’ve chosen it over Badaling for a couple of reasons. KD, on his previous trip, has already been to Badaling, and from everything we’ve heard, it is fairly overrun with visitors. Badaling also involves a subway to a train to a shuttle and so on, and we’re trying to keep it simple here, given the time available to us. Mutianyu turns out to be even less trafficked than we were anticipating, and about an hour and a half after leaving the hotel, we’re riding a very scenic chairlift up to the Great Wall… 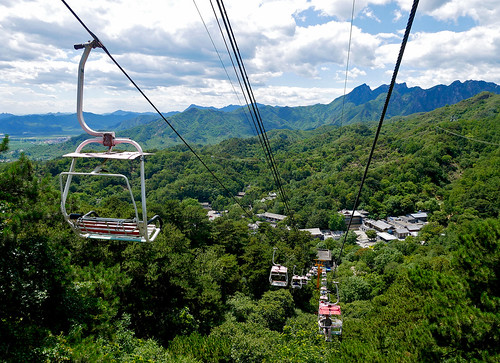 The Mutianyu section of the Great Wall was first built in the mid-6th century during the rule of the Northern Qi. During the Ming dynasty, construction of the present wall began, building over the previous one. Having served as the northern barrier, defending the Capital and the imperial tombs from attack, Mutianyu is notable for its many watchtowers, as well as embrasures along its parapets to allow for cannon fire. In our exuberance, we’ve decided to scale four stages of the wall, leading up to the highest accessible watchtower. Each one an arduous, near vertical task, best appreciated by peering out toward the horizon. 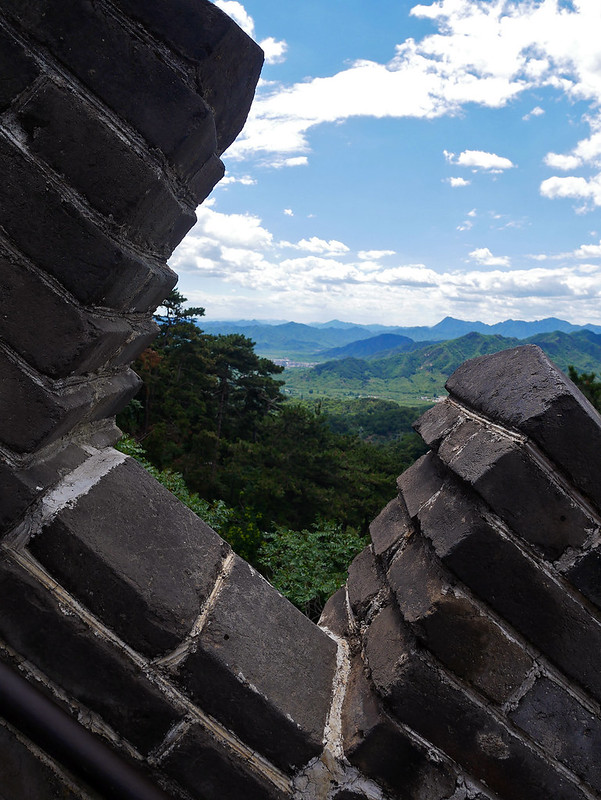 Our hearts pounding and faces beaded with sweat, we look back at our undertaking – our mini ascent suddenly feeling like a major accomplishment. This is, after all, the Great Wall, and we have every reason to celebrate being here. 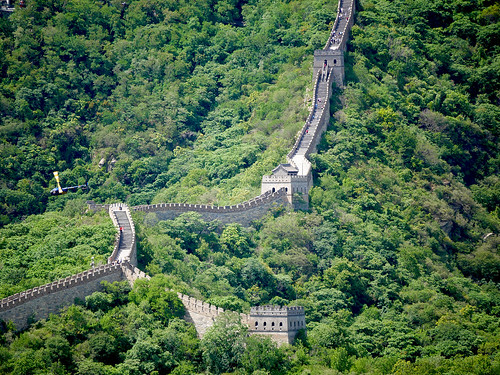 At a cafe by the chairlift station, we toast the occasion with some overpriced Tsing Tao, all while warding off the owner’s efforts to flog us some equally overpriced souvenirs. Then comes the bonus we’ve all been waiting for – riding a toboggan down to the base station… 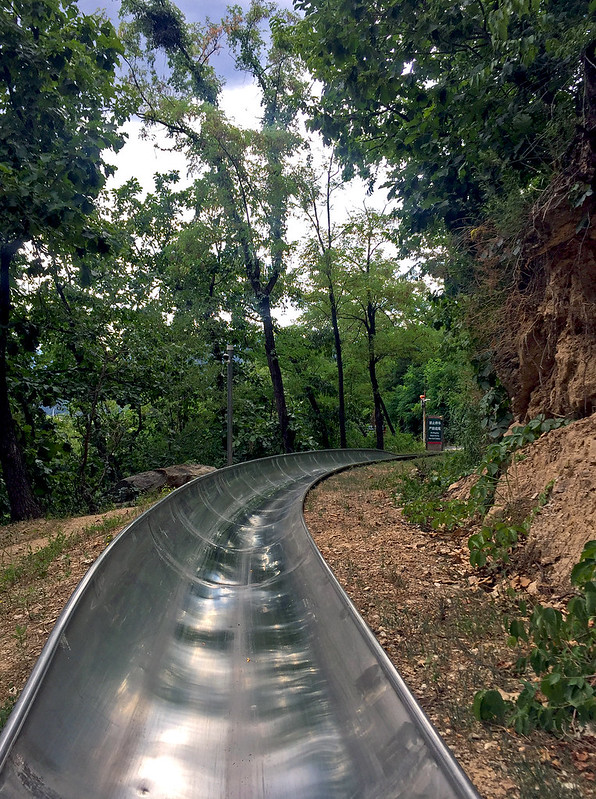 Saving an appetite for Peking Duck – I’m still hopeful – we get a light lunch at Mutianyu, and like pretty much every meal I’ve had in this country thus far, its another simple but memorable one. Perfectly crisp string beans with chili peppers, and pork and scallion dumplings at “Everyone Happy Delicious Restaurant” – what could be better?

Arriving at our hotel a little later than expected, thanks to heavy traffic in the city center, DG and I head out in search of that all evasive aquatic bird. Siji Minfu is at the very top of my list, but my heart sinks when we get there. If the waiting hordes are any sign, I’m going to have to go duckless on this visit. 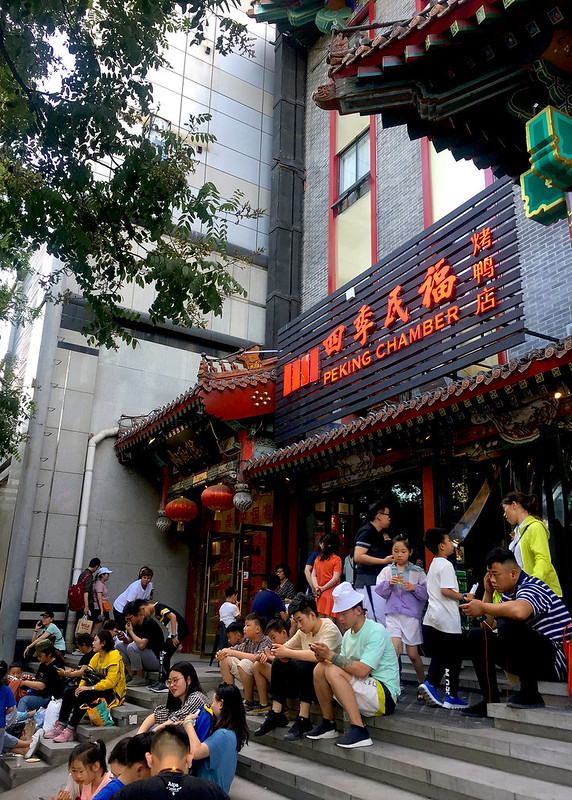 Not having walked a great deal in the city, DG and I decide to make our way back to the hotel on foot, hoping to grab a quick bite on the way. Our route takes us down Jinyu Hutong, a street lined with the Apples, Pradas and Godivas of the world, to name a few, and home to Beijing’s Waldorf Astoria and Peninsula Hotels, amongst others. Wangfujing, a highly popular, pedestrianized shopping street, meets Jinyu Hutong about half way through our walk, and that colorful intersection could well be considered capitalism central. 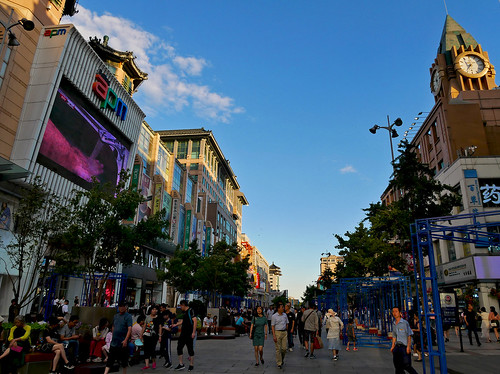 Whereas Jinyu Hutong is a conventional looking street today, Hutongs or alleyways typically represent the Beijing of old; a facet of the city I’d love to explore on a future visit. Meanwhile, amidst the plethora of premium brands and high-end hotels lining the street, DG manages to spot Xia Lun, a lantern bedecked facade, sporting on its door a rather prominent visual of the waterfowl we’ve been seeking. Xia Lun is not a speciality restaurant by any means, but it’ll do just fine for now.

We’re halfway through a shared bottle of Yanjing, when the server shows up with the bird, carving knife in tow. Served here the traditional way – pancakes, spring onions, hoisin sauce, the works – the Peking Duck at Xia Lun is great, but ironically, the real star turns out to be this beautiful dish of Mapo Tofu! 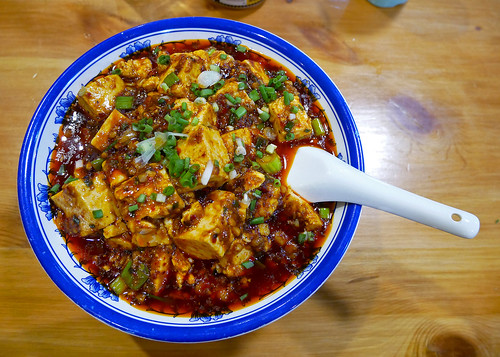 A full set of pics from our time in Beijing and the Great Wall can be seen on my Flickr.

Next on Despatches from the Silk Road :: Suspense in Shanghai

One thought on “Despatches from the Silk Road :: In search of Peking Duck”