Our crew is five strong this morning, with HV having joined us in Ulaanbaatar yesterday, and our cabins are all adjacent to one another in carriage no.6, one of three first class carriages on the train. Each of our rather well appointed rooms feature an en suite bathroom (with shower), plenty of storage space, plush upholstery, and best of all, a sofa. 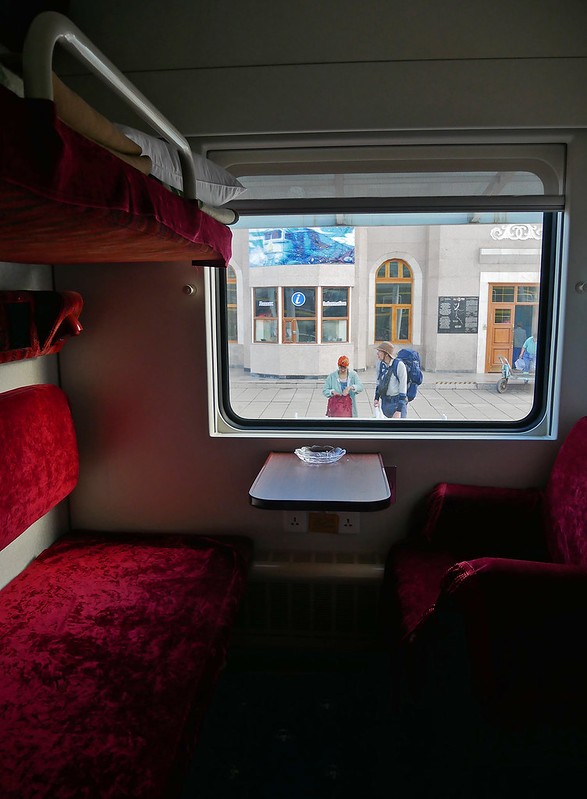 Barely 15-minutes out of UB, and we’re already traveling through nomadic country, weaving a path through the glorious carpet of green that defines the Mongolian steppe; a series of sweeping curves helping us ride the undulations in land form. A colorful hamlet on one side, a Ger camp off to the other. Photo ops, everywhere. 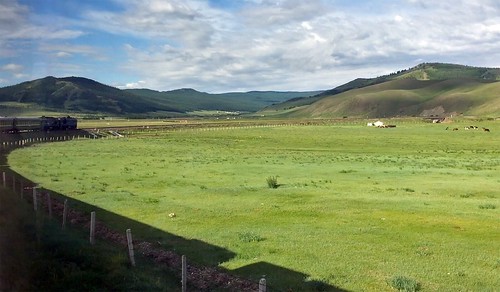 The only thing Mongolian about our train this morning is it’s dining car, and we head there for breakfast. Over-the-top kitschy by way of decor, its utterly fabulous for precisely the same reason, and the vibe couldn’t be more inviting. Retro beats blare from the sound system at the back, as a friendly staffer gestures towards a four top. Around us are seated highly spirited patrons, most of whom have a head start in the beverage department. A hearty breakfast follows, with views to savor. 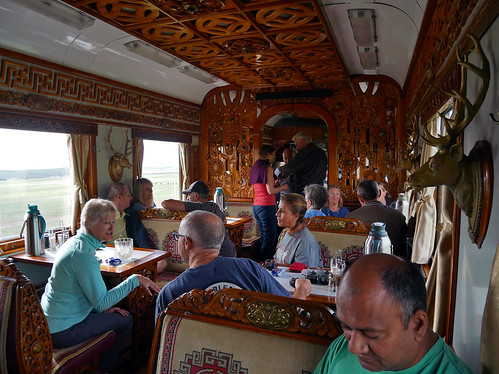 The first meal of the day is a long-drawn-out affair – kind of hard walking away from the convivial atmosphere in the dining car – and so its almost 10 am by the time we decide to make the long trudge back to our carriage. Outside, the topography has flattened out entirely, with a corresponding change in color. We’re now riding the Mongolian plateau. 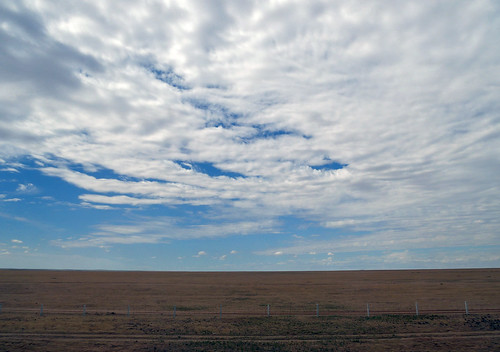 Choir, a town of less than ten thousand inhabitants, is our first stop for the day. As industry goes in Mongolia, its a fairly industrial town, although its real claim to fame is the country’s longest runway – a remnant of the Soviet period, now out of use. A fifteen-minute halt here allows us to pay our respects to another Soviet-era relic – the locomotives hauling our train. The platform vendors, meanwhile, are doing brisk business – reaping the benefits of “international” passengers eager to shed their tugriks. 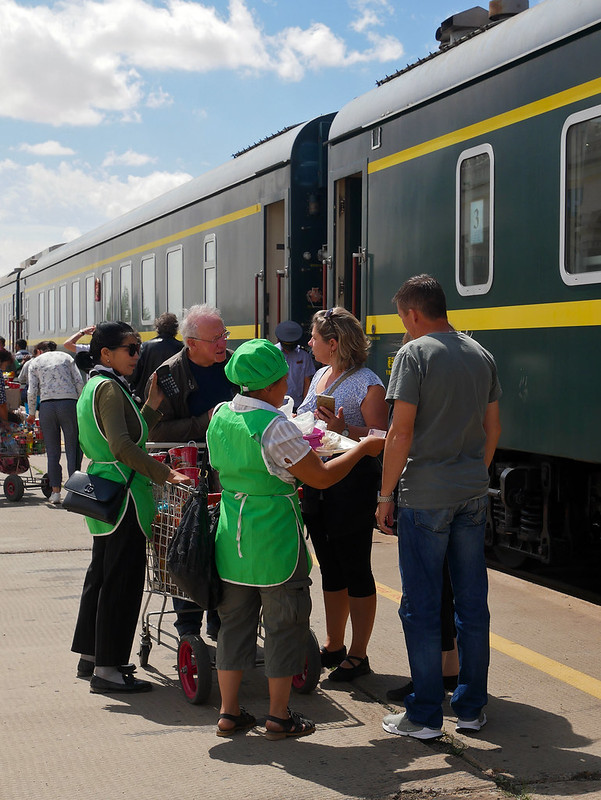 There’s plenty of mining activity south of Choir, with open-cast being the preferred format; a reminder of the mineral wealth this country possesses. Rich in coal, copper and gold, amongst others, its recent mineral boom has earned it the nickname, Mine-golia! Back in the dining car, which appears a lot emptier now, a prix fixe lunch is being served. The equivalent of $26, it turns out to be an overpriced, and not particularly filling meal. A $4 can of Sengur, a local brew, does help though. Sainshand is next, a town almost twice as large as Choir, and it marks our official entry into the Gobi desert. 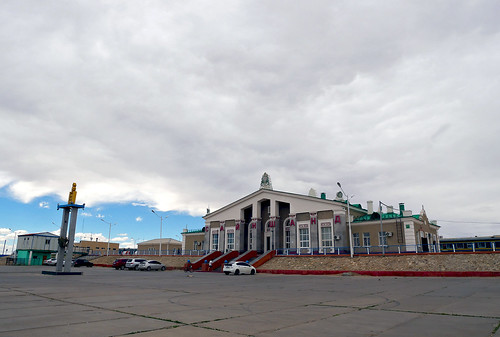 With sparse vegetation, and flat, windswept land all around us now, the transition from the lush, rolling countryside of this morning couldn’t be more striking. For the third time today, SK and I make our way back to the dining car, and on this occasion, all the way to the front vestibule. There, by the door, lie two bags full of firewood, and a gunny sack with a carcass of some description. The Mongolian crew, I imagine, definitely has a feast planned for later. But while I’m decoding all of that, SK has directed his efforts on getting a window opened for us. And yet again, he delivers… 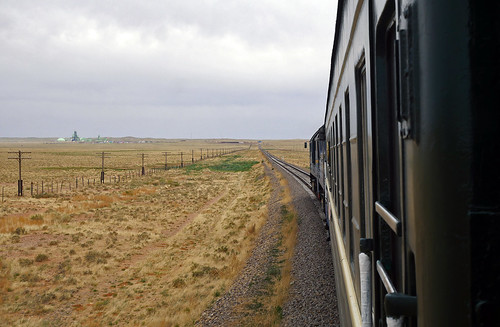 With a wide buffer zone, the rail alignment here has fencing in place on both sides of it. And not for nothing. For the second time today, we’ve spotted a team of wild horses, grazing casually just beyond the rail perimeter. A majestic sight, no doubt, we’re glad for the fencing, however rudimentary it might appear. 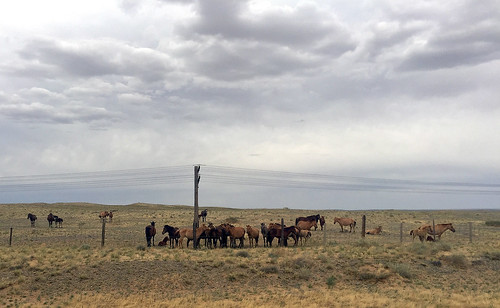 Its tea time, and JB, who’s carried a second bag solely for food supplies, concocts a killer Poha (spiced, flattened rice) and another round of great masala Chai. 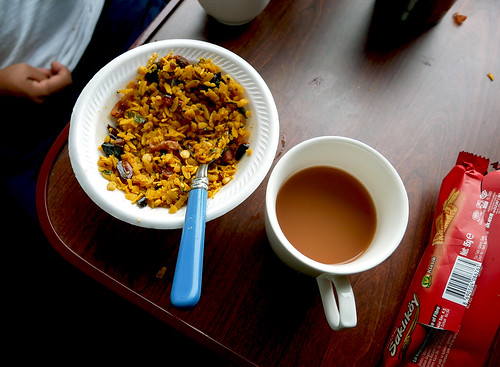 Customs forms are handed out, one each for Mongolia and China, and we busy ourselves with the necessary paperwork. The second largest desert in Asia, the Gobi spans much of southern Mongolia, and given its location on a plateau, is known for its climatic extremes. Only the hardy can survive here, and a lot of them are the men and women who keep the Trans-Mongolian railway running throughout the year. As Train 24 slows to a crawl, a lone rider charts a dusty trail through the wilderness. He’s headed towards a colorful collection of single family homes – housing for railway workers – about the only bit of vibrancy in this otherwise monotonous desertscape. 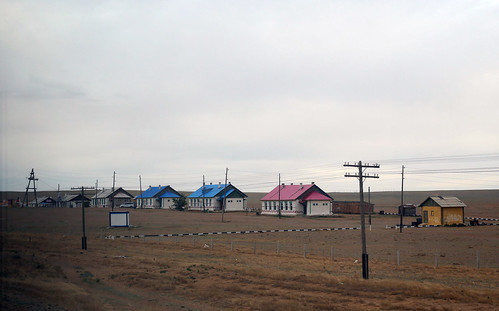 Despite the visibly inhospitable conditions, the Gobi supports a fairly respectable ecosystem, including camels, gazelles, wild asses, and even snow leopards, with the double humped ungulates – found in large numbers here – being the easiest to spot. The unpredictable nature of the weather – often within a 24-hour period – also provides for some spectacular, year round, light shows. 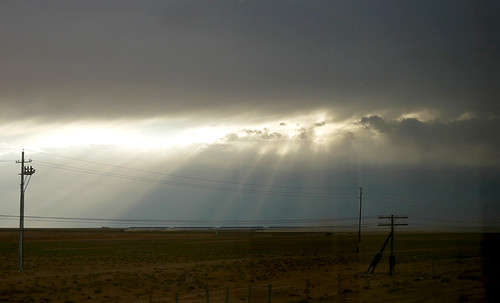 Zamyn-Üüd, on the Mongolian frontier, is where our passports and customs forms are collected, although we’re not allowed to disembark. Its twenty past eight by the time we receive our documents back, and we’re sent off in style, with Mongolian border personnel saluting Train 24 as it pulls out. Erlian or Erenhot, not far south from Zamyn-Üüd, is our point of entry into China. As Train 24 is whisked away for regauging, we begin an excruciatingly long four-hour wait at the Chinese border inspection facility. 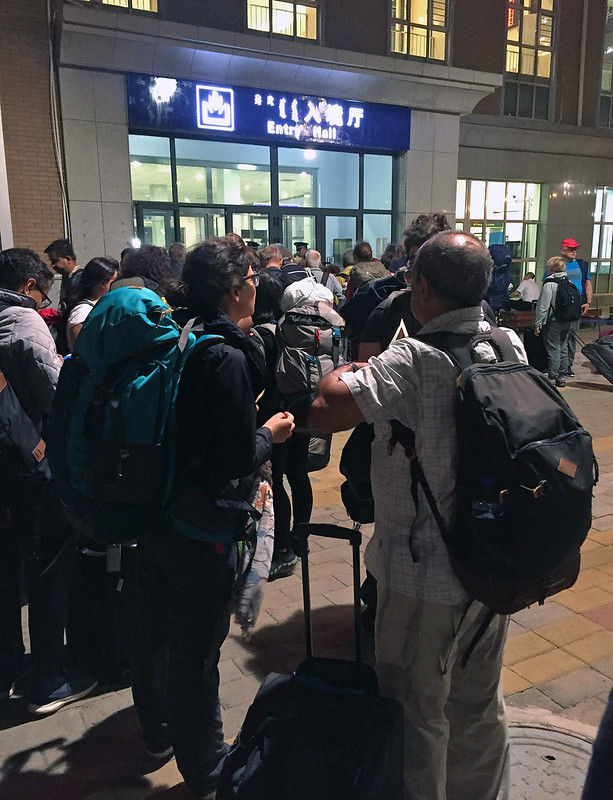 For some inexplicable reason, even after clearing all the entry formalities, the town itself is out of bounds to us. We have access to a small outdoor area, which is akin to a holding pen for animals, and a lone store within the facility, who’s owner is doing roaring business with all the premiums being charged, on top of the atrocious exchange rate offered. His captive clientele doesn’t seem to mind though, using this as the last opportunity to get rid of their large-denomination tugriks. The help desk here has a whole list of offerings; my favorite, and probably the most apt of the lot, “stressed service.” It sums up our experience at Erlian beautifully. The icing on the cake – there’s absolutely no one staffing that desk.

After a harrowing night, everything appears extraordinarily calm and orderly as I step on to the sun-lit platform at Jining Nan. The last of the cities within China’s Inner Mongolia region, Jining Nan boasts high level platforms and overhead electrification – signs that we’re on a Chinese trunk route. T-7 to Beijing. 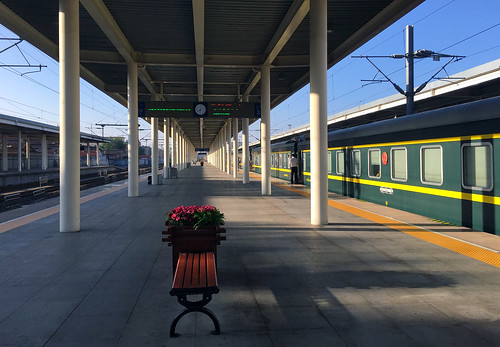 Since none of my fellow travelers are up yet, I make my way to the dining car, which is now adjacent to our carriage; the Mongolian one having been replaced by a Chinese one during our stop at Erlian. Its surprisingly full of customers this early, but lacks character, or any semblance of service. I finally manage to get a cup of oolong tea.

We’re now coasting past Zhangjiakou, a relatively unknown city of almost 5 million inhabitants in China’s Hebei province. With its cookie cutter ~30-storey apartment blocks, its one of several dozen we would cross through our travels in the country. And with every decently-sized city in China, comes the infrastructure they’re famed for. A sprawling solar farm. A state-of-the-art expressway. A high speed rail line. An ultra-modern power plant. Wash, rinse, repeat. 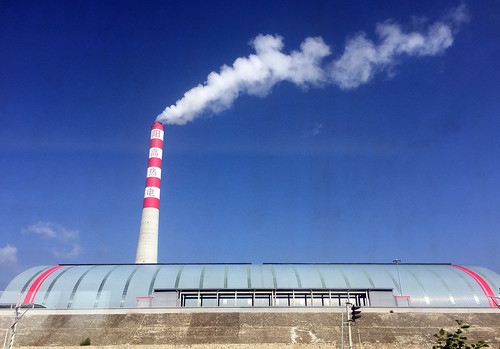 At 10 am, completely starved by now, I make a second attempt at getting service in the dining car, this time dragging everyone along with me, for some entertainment, and hopefully, some food. The leader of a French tour group has engaged the only dining car attendant there is, trying his best to arrange lunch for a party of twelve. Only after he’s succeeded in getting some semblance of a message across to her, do we receive a menu. Good thing its in Mandarin and Cyrillic. Breakfast service, if ever there was one, is not being offered – this despite the fact that the train’s staff seem to be indulging in the same – so we settle for an early lunch instead. My dish – a Kung Pao variant, sans the peanuts – is fairly palatable, and a fraction of the price of yesterday’s lunch.

As DG and JB delve deeper into matters pertinent to China’s economic future, SK, HV and I turn our attention to the world outside. The Xīshān (west) mountain range has been a distant backdrop for a while, but is now a lot closer than before, separated from us by the Guanting Reservoir, the largest of the reservoirs that supply water to Beijing. A system of spillways help channel water from the reservoir back to the Yongding River, and for the next hour or so, we follow its course downstream through the Guanting Canyon – a completely unexpected visual treat. 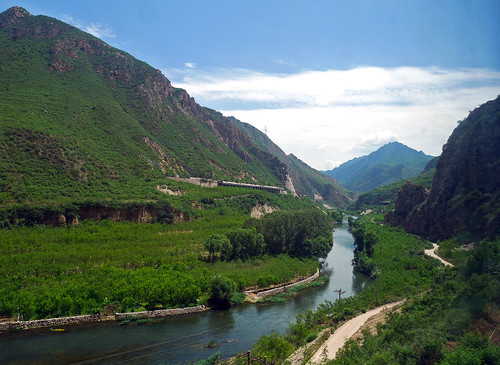 After a spirited run through canyon country, some of it obscured by the sixty-odd tunnels we just went through, and having lost sight of the Yongding entirely, we enter the industrial outskirts of Beijing. More airport-like than rail terminal in its appearance, Beijing South Railway Station is next. Boasting 24 platforms in all, it hosts most of the high speed rail services that call on the Capital. But Train 24, unimpressed, glides right past it. At 2:35 pm, 31-hours and 1500-km (932-miles) later, we pull into Beijing Main, right on time. 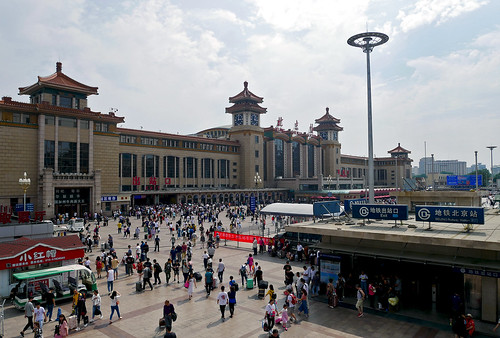 A full set of pics from our journey on the Trans-Mongolian can be seen on my Flickr.

Next on Despatches from the Silk Road :: In search of Peking Duck

One thought on “Despatches from the Silk Road :: The Trans-Mongolian”