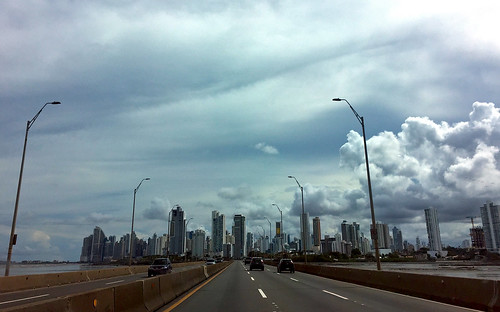 Sunday, Noon: Pretty as the peninsula
Established almost five centuries ago, the original settlement of Panama City was sacked and destroyed in the late 17th-century by privateer Henry Morgan, the same Welsh gent who’s name lives on today through a namesake bottle of rum. In 1673, along a peninsula some 5-miles southeast of the original settlement, the city was eventually rebuilt, this time protected by a defensive wall.

Over the next few centuries, Ciudad de Panamá expanded to the footprint it bears today, and through it all, the fortification worked as planned. Dwarfed by the sprawling skyline to its east, the old quarter or Casco Viejo, as its commonly referred to, was designated a World Heritage Site in 1997, and today represents one of the most thriving and well preserved colonial centers in Latin America. 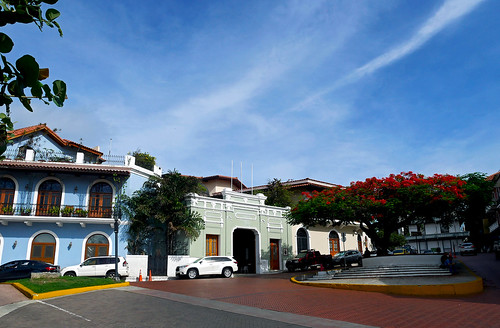 Sunday, 2 pm: In caffeine we trust
Part hostel, part hotel, Magnolia Inn, in the heart of Casco Viejo, is where I’m staying. The prices here, while still affordable, are reflective of the high demand from the States, and the property is amongst a dozen or so boutique hotels in the old quarter. More are on their way, and some, like the American Trade Hotel average out at ~ $270 for the night. All this in low season.

Thankfully, there are a few to choose from, depending on your budget, and more importantly, eating and drinking out don’t cost a fortune here. Unless of course you ask for the $9 a cup serving of Geisha. Thats too rich for my blood, so I settle for the more humble pour-over version at Unido. One of many coffee establishments in the old quarter, this beautiful cafe is located in the aforementioned hotel, and could be considered a worthy ambassador for the exceptionally good coffee this country produces. 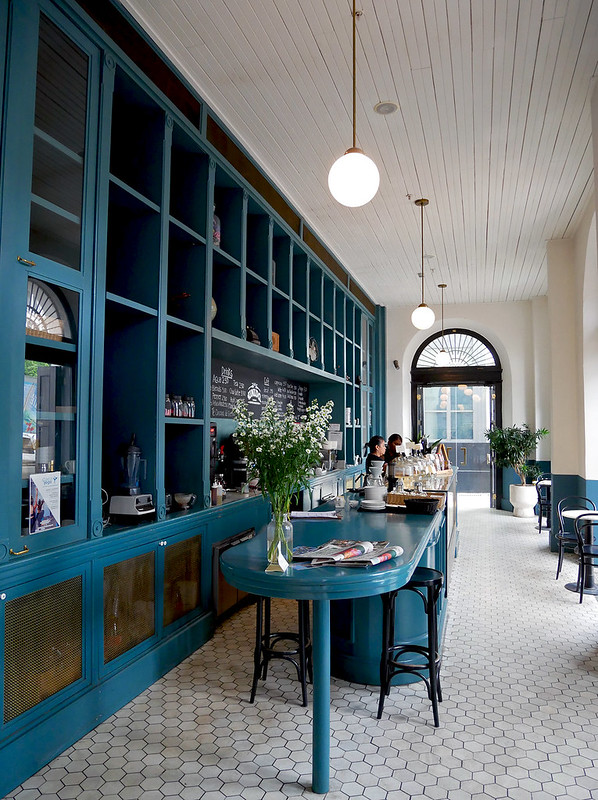 Sunday, 4 pm: Paying obeisance
For anyone who knows me, my love for transport extends beyond just trains. Ok, maybe not to the same degree as trains, but still. Having grown up in a family with plenty of seafarers amongst us, I’ve always had an interest in vessels, large and small; ports and harbors, and all the intricacies of navigation that go along with it. So my heart is already racing when I see the smokestack of a ship in the distance, and we haven’t even reached the visitor center at Miraflores.

Located 7.5-miles (12-km) northwest of Casco Viejo, Miraflores is one of five in a system of locks that make up the Panama Canal. The two-stage flight of locks have been in operation for well over a century, lowering ships from Gatún Lake to the level of the Pacific and vice versa, 24×7, 365 days a year. Watching the operation up close, for what is often regarded as the Eighth Wonder of the World, is an opportunity of a lifetime, and I’m like the proverbial kid in a candy store.

Sunday, 7 pm: Evening lights
An hour behind eastern time, but much closer to the equator, the days in Panama feel a lot shorter, even in the summer. So by the time I’m back in the old quarter, there’s only an hour or so of light remaining. I make my way towards Paseo Esteban Huertas, a scenic promenade shaded with a canopy of bougainvilleas, famed for its views of the bay and the modern city. There, twinkling bright beneath a forbidding sky, Panama City’s skyline – boasting more skyscrapers than even Miami – is a sight to reckon with.

Paseo Esteban Huertas, named after one of Panama’s independence leaders, and built atop the old city’s outer wall, lies at the southern tip of Casco Viejo. If you follow the path around, you’ll end at Plaza de Francia, a picturesque little square that pays homage to the French role in the construction of the canal. For what is widely considered to be one of the greatest engineering feats of our time, the Panama Canal also took its share of lives – an estimated 22,000 of them during the French initiative alone – most of them succumbing to Yellow Fever and Malaria. The plaza serves as a somber reminder of that time. 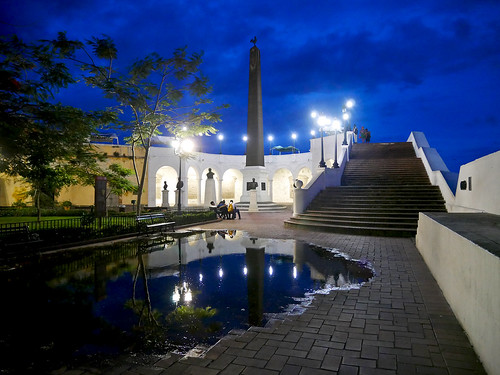 Monday, 7:15 am: The first Transcon
More than half a century prior to the canal being built across the isthmus of Panama, a railroad commenced operations between the Atlantic and the Pacific. The Panama Railroad Company, as it was known then, was built by the Americans to cater to the massive increase in passengers and freight following the California Gold Rush. In doing so, it became the world’s first transcontinental railroad or transcon – all 48-miles (77-km) of it – preceding the momentous occasion at Utah by fourteen years. And as with the canal that followed, the construction of the railway came at a monumental cost, both in terms of money and human life.

Today, the railroad sports a new name, is primarily vested with the transshipment of containers, and offers a lone passenger service catering mostly to tourists. The 0715 to Colón departs Corozal station, on the outskirts of Panama City, every week day, and $25 gets you a one-way ticket to the Atlantic. The train, made up of historic rail cars, each sporting their own viewing gallery, covers the paltry distance in a little over an hour, on a route that parallels the storied canal, and cuts right through a lush tropical rainforest. As short and inconveniently timed as the journey is, its also incredibly exhilarating, and not one to be missed. 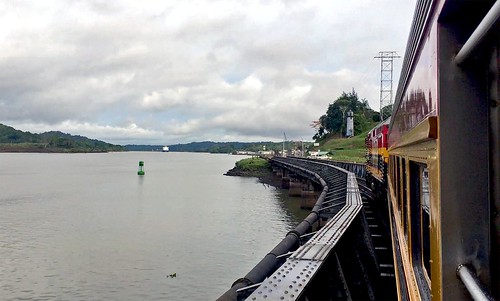 Monday, half noon: The heights of Ancón
The Americans completed construction of the canal in 1914 but didn’t quite leave Panama. Instead, they created an administrative zone, and decided to, well, just stick around as long as it suited them. The Panama Canal Zone included military establishments – no surprise there – and was expanded as and when convenient to them, eventually encompassing Cerro Ancón, the highest point in Panama City.

In 1977, after the signing of the treaties, the Americans were forced to leave, but Panama wouldn’t get control of their canal for another two decades. As if to stick it to them, the Panamanians  wasted no time in installing a larger-than-life national flag, capping off the 654-ft high Ancón Hill. Fortunately, the Americans left the hill largely unscathed, and its now home to a verdant nature reserve, well supplied with flora and fauna, and only one way to get uphill – a 1.3-mile (2-km) long hot trudge… 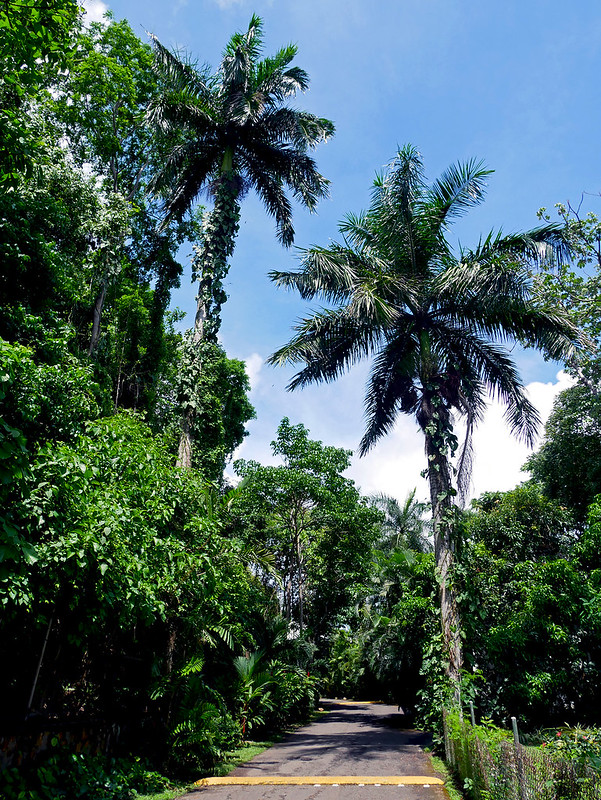 I reach the summit some 35-minutes after being dropped off at the base, completely winded and soaked in sweat. While the temperatures here aren’t exactly earth-shattering, the humidity in Panama is certainly oppressive. But you’ll forget all of that the moment you reach that very first clearing in the thicket… 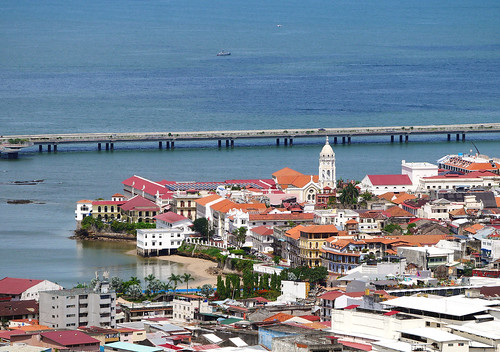 If you follow the order of the many overlooks, the lay of the land here is easy to grasp; the ultra modern skyline to the east, the Pacific sprawled out in front of you, Casco Viejo‘s distinctive red roofs at your feet, the mighty Bridge of the Americas marking the entrance to the Panama Canal over to the west, and if your timing is right, a Neopanamax ship complementing it all. 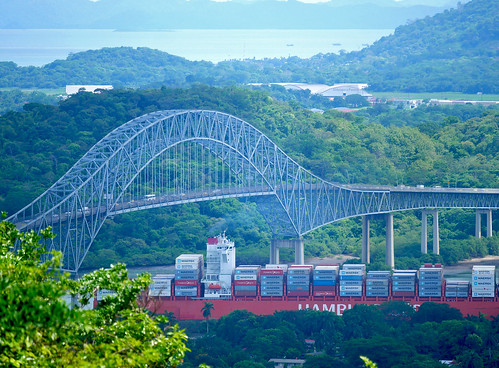 Monday, 2:30 pm: Sea to Table
Mercado de Mariscos, located a short walk east from Casco Viejo, is Panama City’s bustling seafood market. A pier at one end receives fishing boats of every conceivable size and capability, and at the other end lies an indoor marketplace, where the catch of the day is traded. In between – partially open to the elements but cooled by the breeze coming off the bay – are a dozen or so restaurants of the ever-inviting, mismatched plastic chair variety. Latin beats blare from the speakers, a local football match streams through the overhanging TV sets, a chilled can of Balboa takes the edge off the day’s heat, and ceviche, fresh as it gets, makes its way to my rickety table. Idiom, served. 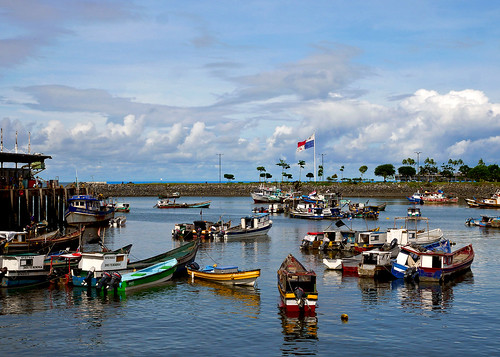 Monday 5 pm: If its the last thing I do
From my high perch at Cerro Ancón a few hours ago, Frank Gehry’s Biomuseo looked most enticing. As did the Amador Causeway. Or for that matter, the shiny new metropolis to the east. And I probably even have time to do one or more of those. Then again, I also accidentally wiped my data card last night, and have little to no proof that I was actually within touching distance of a handful of ocean-going behemoths less than 24-hours ago. So if there’s one thing I’m going to do before I leave, and have absolutely no qualms about, its a trip back to Miraflores… 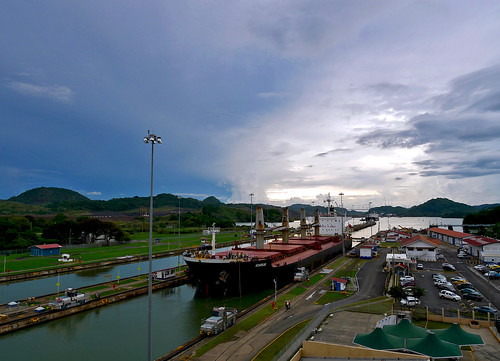