Cuba is one of those destinations where reliable information is hard to come by, only a little is actually known, and everything in between is left to perception. The Americans, in the short period Cuba has been open to them again, can take credit for putting a whole roster of places on the map. A ready reckoner, if you will, for any first time visitor. Go to the Nacional for a Mojito, Hemingway used to go there. El Floridita for a Daiquiri. To Tropicana for cabaret. And don’t miss out on so and so bar – it was Hemingway’s preferred watering hole. But as Fabricio, who lead a walking tour I was part of, explained, every bar, by definition, was a Hemingway favorite – the man simply loved to drink. Over time, some of those tales have been debunked, yet others persist. You’ll end up doing a bit of everything, no doubt, and rest assured, you’ll know a touristy spot when you see one. 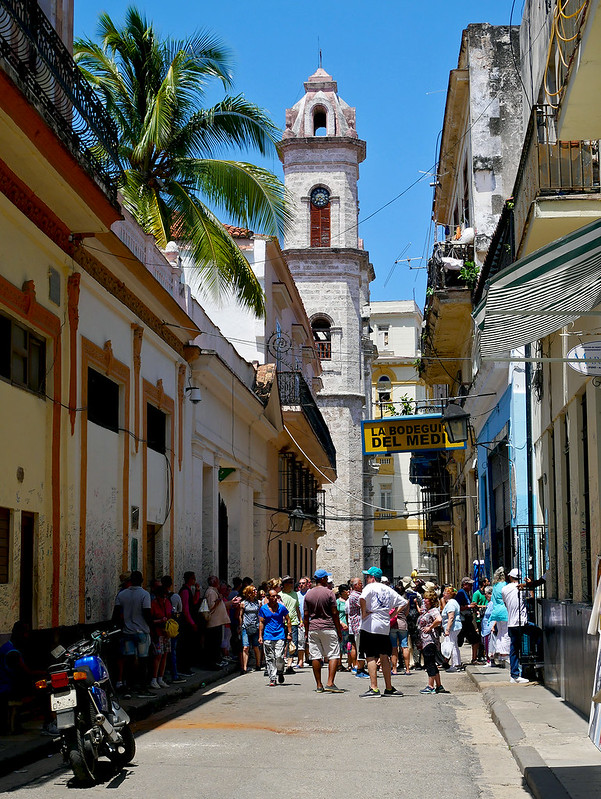 But the influx of visitors from the States has also led to entrepreneurship on many levels, and opened up opportunities of employment for practically any English-speaking Cuban. Casas particulares have sprung up everywhere, providing a much needed respite from state-run hotels. A whole slew of Paladares have given rise to a community of chefs, and helped elevate Cuban cuisine, which not long ago was dismissed as bland. Change is happening, however slowly.

Granted, three days is not enough for a destination as storied as Havana, leave alone a country the size of Cuba, but for what it’s worth, and in no particular order of importance, these were my ten favorite experiences.

Breakfast at Beatriz’s Casa
As cliches go, mi casa tu casa is up there with the very best in the hospitality industry. But not only did Beatriz’s Airbnb live up to its excellent reviews, it exceeded every expectation I had. My room in her beautifully kept colonial mansion was comfortable, offered plenty of privacy, and had an en suite bathroom that would rival the square footage of a studio apartment in NYC. But more than anything, Beatriz, with plenty of help from her gregarious assistant Maria, gave meaning to the overlooked B in Airbnb. A first for me. So breakfasts – made to order every morning – were looked forward to with renewed enthusiasm, in the ever-charming, always breezy veranda. 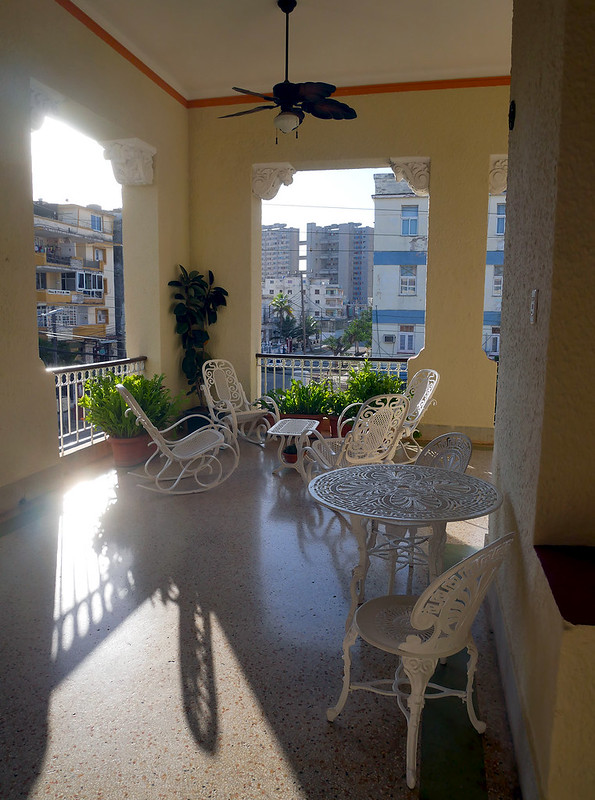 The mansions of Vedado
Vedado means forbidden in Spanish. A former military base (hence the name), Vedado is a primarily residential neighborhood today, located a few miles west of the city center. The vibe here, as with several of Havana’s neighborhoods, is distinct. In part because of its grid-like network of streets – uncommon to the rest of the city – and an eclectic collection of mansions, dating from the days of Cuba’s booming sugar trade. A few of them are still single family homes, as they were originally intended, while many have been suitably repurposed. My Airbnb was located in Vedado, and walking through its leafy streets was always a pleasant experience. I had no doubt that most, if not all of those stately buildings, had been through plenty, having witnessed their owners fortunes rise and fall, and I couldn’t help but wonder what stories were contained within. 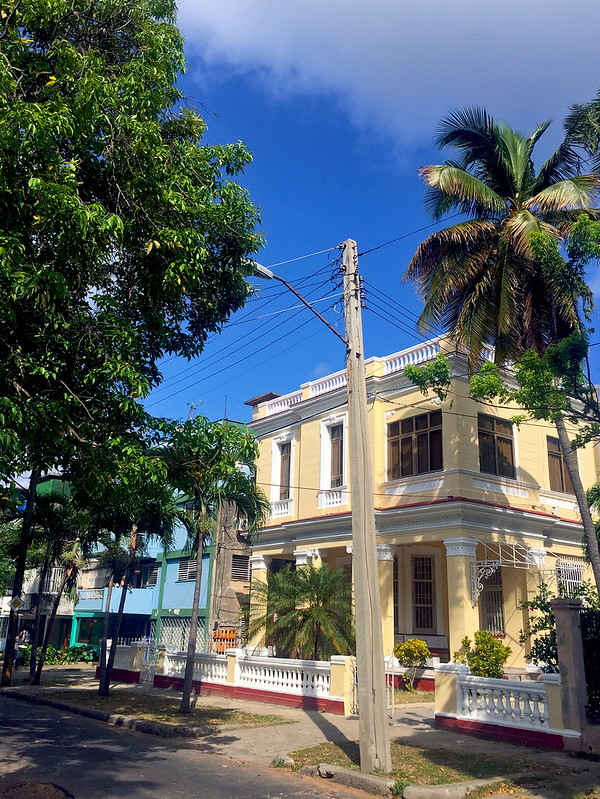 Cruisin the Malecón
The Malecón is a 5-mile (8-km) long promenade that connects Vedado in the west to Old Havana in the east. Its often referred to as Havana’s sofa, and for good reason too. The gently winding coastal boulevard is, without doubt, the city’s most beloved thoroughfare, drawing locals out by the hordes to watch the sun dip behind the horizon, and soak in the cooler climes of the evening. Twilight melts into darkness and the party goes on till the wee hours. For many, its the only form of daily entertainment. Regardless of what time of day you’re there, El Malecón is an absolute joy to cruise along, in whatever means might be available to you – be it a classic convertible, the gimmicky but rather delightful coco taxis, or simply on your two feet. And no matter how scorching the sun might be, the sea breeze in Havana is unlike any I’ve experienced; one thats guaranteed to cool you down, and soothe the senses. 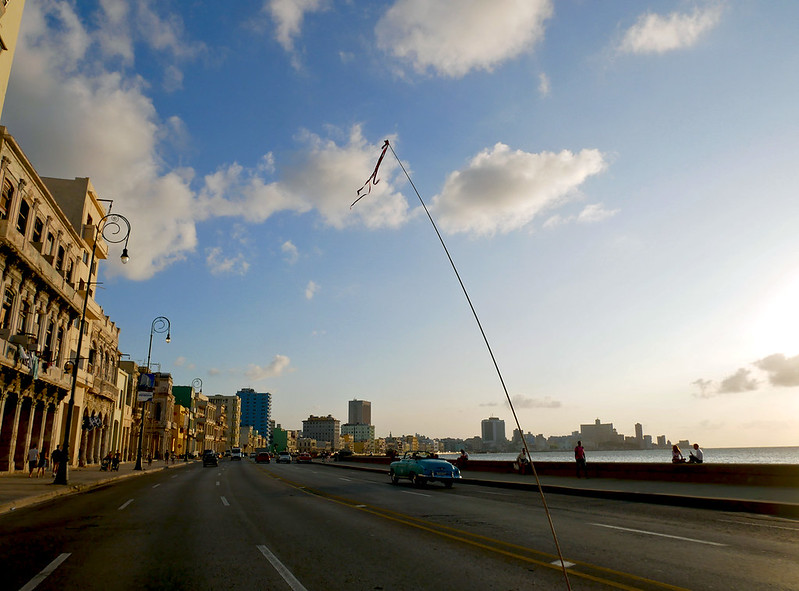 Ambling through Centro
Centro Habana is the largish neighborhood that separates Vedado fm Old Havana. It’s most glamorous side is probably where it fronts the Malecón and even that is fairly run down. It’s where you’re least likely to find yourself, unless being driven through it on your way to some place more exciting, or perhaps stopping briefly to see Callejon de Hamel, an alleyways worth of an art district. But as dilapidated as it might appear, the architecture is marvelous, the colors will dazzle you, and its all perfectly safe to walk through. Devoid of landmarks and the accompanying tourists, this is Havana at its most authentic. Rough on the edges but genuine, its where you can begin to get a flavor of Habanero living. Download maps.me ahead of time, plan a route, and soak it all in – you’ll be pleasantly surprised with what you find. 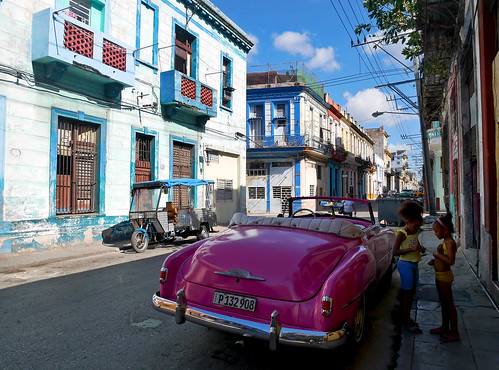 The courtyards of Habana Vieja
Fabricio‘s walking tour, all of three hours long, was an incredibly insightful one, and a first for me as far as “experiences” go on Airbnb. We covered the four most noteworthy plazas of Habana Vieja or the old town, stopping at several points along the way that were of architectural, cultural or historical significance. In between, whenever we felt the sun bearing down on us, we would duck into a courtyard. And Habana Vieja has no shortage of these. Lush garden courtyards, tucked deep within 18th-century buildings, rich in architectural detail, well supplied with moorish accents, cisterns et al. Some have been turned into museums or galleries, even hotels, while others still provide housing on the top floors. But they’re almost all open to the public, and each one is a delight. Come in for the shady reprieve, stay for a chance encounter with a Peacock. 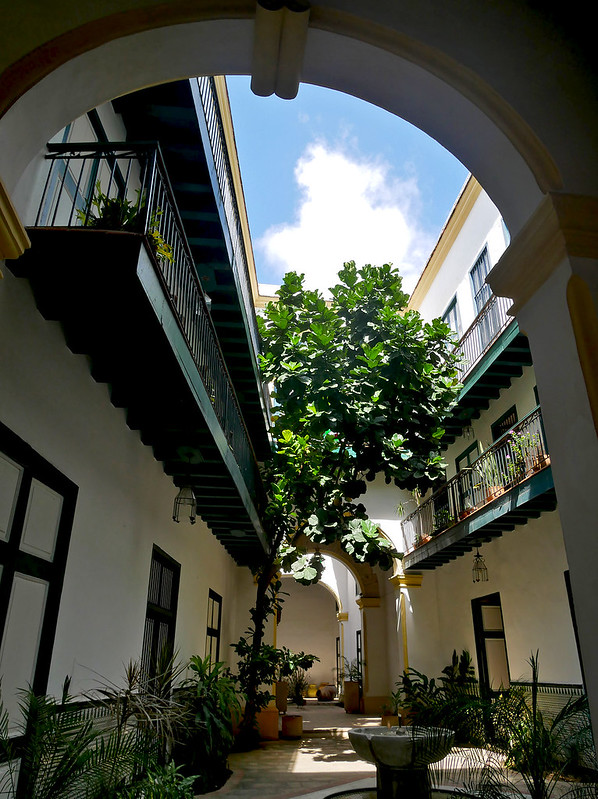 The Forest of Havana
Located along the course of Rio Almendares, the Forest of Havana or Bosque de La Habana is a lush tropical forest, practically in the heart of the city. Its where Habaneros might go to unwind on a weekend, or where followers of Santería, a religion that merges West African and Roman Catholic traditions, perform their centuries-old rituals. Its where you’ll find the brilliant Malanga plant growing in abundance; where you’ll stop in your tracks to stare in awe at giant Banyan trees; where the foliage is so thick, the sun barely manages to break through. As urban oases go, the Forest of Havana is up there with the best of the best. 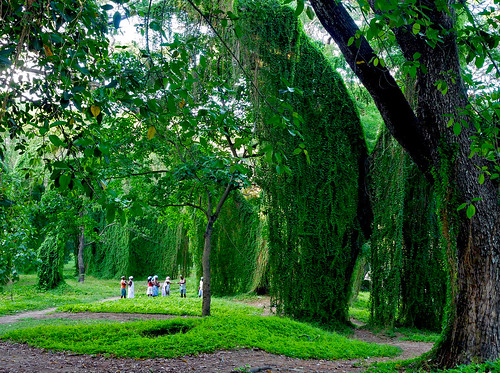 The simplicity of the Cubano
Unknown to many, Cuba has a dual currency system. The CUC or Cuban Convertible Currency is at par with the US$. The Cuban Peso or CUP, on the other hand, is typically 25 to 1. While the former is accepted everywhere, and you can get by fine on any given visit, the latter opens up a whole new world. Everyday purchases. Be it the equivalent of 4 cents to ride a public bus or the chance to buy inexpensive food and beverages. Commonplace as far as street food offerings go, the Cubano can typically be bought for less than a quarter, and in its most basic form is nothing more than ham pressed between two slender pieces of baguette-style bread. It’s cheap, convenient, incredibly satisfying, and in some ways, a fair representation of the simple lives people lead on this island. 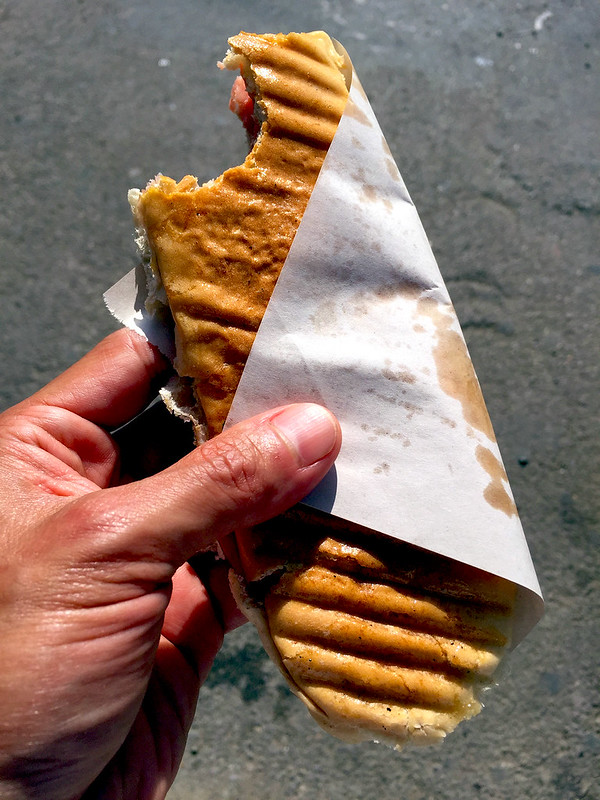 The views from El Morro
When the Spanish showed up in Cuba, one of their earliest settlements in the New World, they were suitably impressed by Havana. They knew right away that its location would prove to be of great importance, as treasure-laden ships headed back to the homeland made Havana their last port of call. And that treasure, amassed from their newly established colonies, needed to be protected. Castillo de la Real Fuerza, a bastion fort, was completed in 1577, but proved inadequate almost immediately. Over the next two centuries, a half dozen fortifications were added, all of which remain to this day and are counted amongst the oldest and largest in the Americas. El Morro fortress, with its commanding position, was one of the most important, guarding the entrance to Havana Bay. Its been out of use for well over a century now but still boasts unparalleled views of the Malecón, the harbor, and everything in between. Time it around magic hour and you will be handsomely rewarded. Stay past sundown, and you’ll experience the ceremonial firing of cannons from nearby La Cabaña. 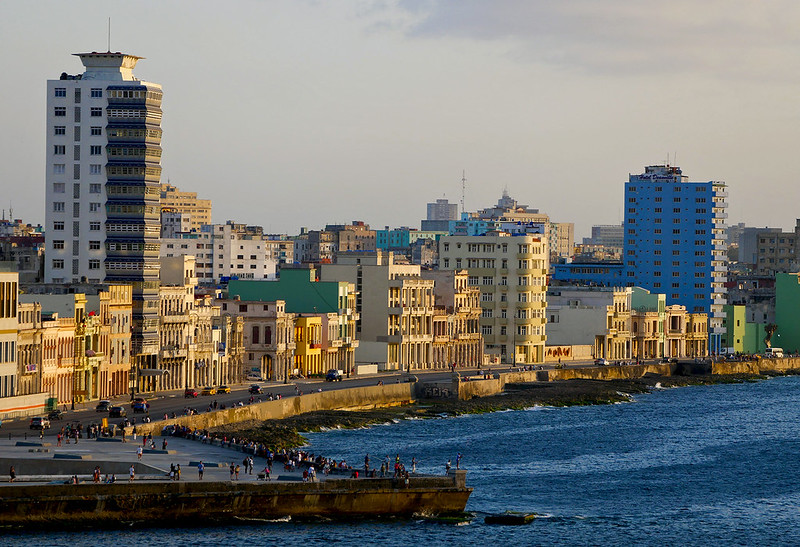 Thirty-minutes to La Playa
Veradero is where you’d typically go, if you craved some sun and sand, and had time on your hands. Being the largest of the Caribbean islands though, Cuba has a coastline to reckon with, and no shortage of idyllic beaches to choose from. And in that regard, its capital city isn’t one to be left behind. Only 16-miles (25-km) east of the city center, Playas del este could almost be considered an extension of Havana. For just 5 CUC roundtrip, buses depart Parque Central in Habana Vieja every 40-minutes, setting you down in pristine sand barely 30-minutes later. Its an inexpensive and incredibly convenient way to break up your urban adventure, all while getting access to the enchanting waters of the Caribbean. 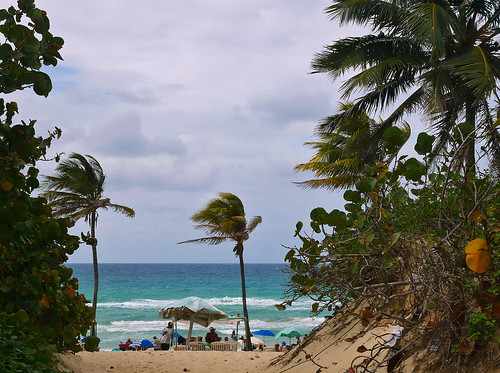 Sundowner at La Chorrera
In Havana, Mojitos come cheap, and rooftop bars are a dime a dozen. But of all the Mojitos I drank, and all the al fresco bars I relished, I would go back to La Chorrera in a heartbeat. Not because they make the best Mojito in town – far from it in fact – but for the alluring location alone. At the west end of El Malecón, far from the madding crowd, where Rio Almendares meets the ocean, lies a 17th-century fortification. The last of the city’s defense bastions to be built, its now home to bar and restaurant, Mesón de la Chorrera, which, despite its obvious appeal, is as no-frills as it gets. For the princely sum of 3 CUC, you get a sundowner, an impeccable view, and a setting thats hard to beat. 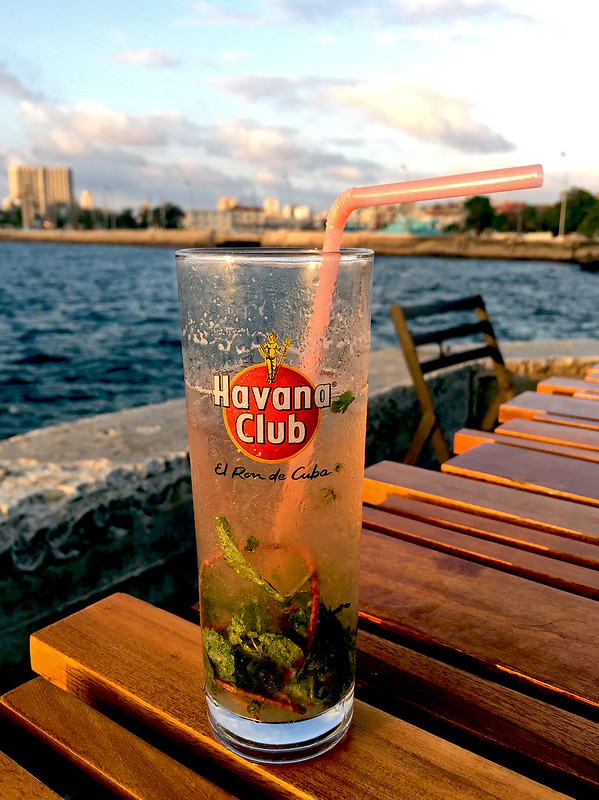 Cuba can be challenging as a destination, to say the least. Especially if you decide to do it solo. But its incredibly rewarding too. More than you can imagine. Its been four years already since it opened up to tourism in a big way, and things are only bound to change. The Cubans are certainly hungry for it, even though the idealist may not be. It will change. Some of it for the better. Some not so. As Havana prepares to celebrate 500 years of its existence, there’s probably no better time to visit than ahora!

A full set of photos from my visit to La Habana can be seen on my Flickr.

2 thoughts on “The Great Havana Hangover”