Sasha and Anya were at it for a while last night – drunk and very much out of control – eventually reined in by the occupants of our neighboring cabin, who asked them to STFU. So despite my best efforts, it wasn’t until 2 am that I finally got some sleep. I awake just as we’re easing out of Vikhorevka, which, like Ust-kut, features a more traditional-style building, and a steam locomotive plinthed on its main platform. Quite unlike the last couple of days, its blue skies and plenty of sunshine, on this, the final morning of our journey on Train 75. 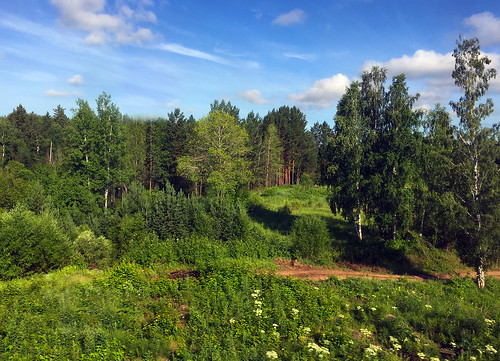 Two distinct varieties of trees make up the Taiga this morning – the white barked birch, and the more common conifers, larch and pine, with their trademark orangish-brown barks. The forest aside, there are no mountains in sight, and its not in the least bit undulating, but we’re surrounded by lush meadows, abounding in colorful wildflowers, by far the largest and most varied collection we’ve seen till now… 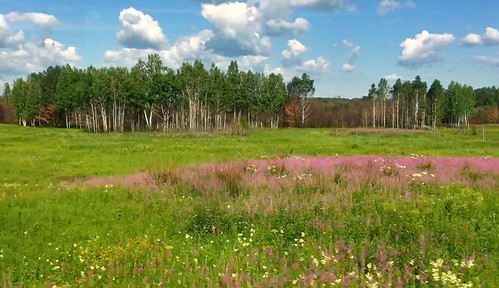 A little before dawn, we would have called at the industrial city of Bratsk, one of the largest population centers in this part of Siberia, notable for its massive hydroelectric plant. The habitat along our route seems to have picked up quite a bit since, and even more so as we inch closer towards Tayshet. Plenty of little hamlets along the way, with their collection of traditional Siberian cottages, and a corresponding number of stations serving them. Train 75 rushes right past them though, only pausing for thought at the lumbering town of Chuna, an hour or so east of our destination.

Arrival at Tayshet is, horror of horrors, 3-minutes late! It’s a spectacular morning as we step outside, with the mercury hovering at the 20C (68F) mark, and a gorgeous sky above. It sure feels good to finally be in Tayshet, the western end of the Baikal Amur Magistrale, the point at which it meets the storied Trans Siberian Railway. 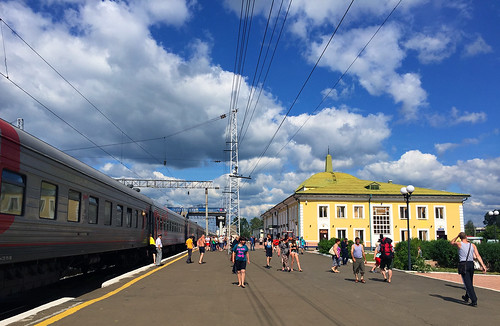 Its another well kitted out station, with all the amenities and efficiencies we’ve come to expect of the Russian rail system. And even though they find no mention in our guide books, “resting rooms” do exist at Tayshet. As the endearing sign at their entrance points out, they are “open from around the clock”. For the grand total of $12, we’re assigned room #2, which, being a “family room”, comes with a crib. Perfect for drying our towels. 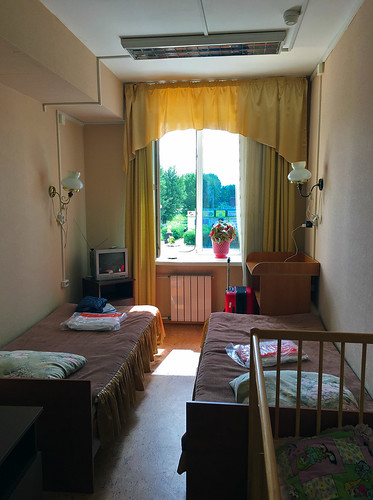 Overlooking the main platform, and all its ensuing activity, room # 2 comes with a great view too. Train 75 is still standing there, and Sasha and Anya are probably still on their upper bunks, dead to the world. They have a long way to go, and plenty of time to heal, till the train reaches its final destination, Moscow… 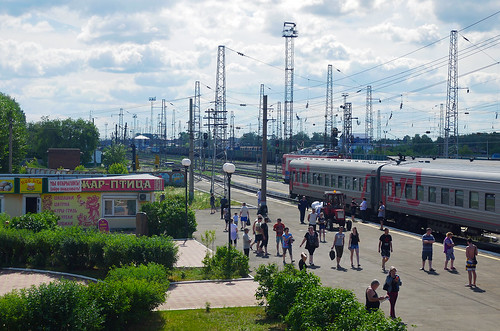 The dush (shower) is put to good use by SK and yours truly, and sufficiently refreshed after our 47-hour journey, we head out to find some food. The station has not one, but two cafes, both quite stately in appearance – befitting the overall aesthetic of the building – and the one at the west end finds our favor. It’s July the 4th – in Russia at the very least – so we celebrate the best we can! 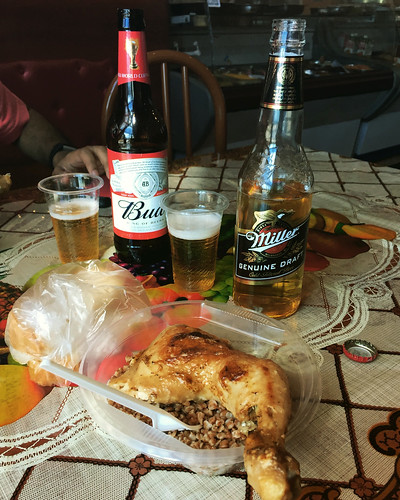 A memorial to the Great Patriotic War occupies pride of place on the plaza outside the station, and further to the north, stands a beautiful stone water tower, dating from 1906. Ul. Transportnaya is the sleepy thoroughfare that runs adjacent to the station, where a lone hotel, a colorful supermarket, a couple of ATMs, and a handful of local taxis make up the street scene. East of the plaza is plinthed a steam locomotive, its business end adorned with an intriguing variety of wreaths. Between the steamer and the main platform stands a bust of Stalin, and in front of it, closing out our tour of Tayshet‘s main sights, a plaque commemorating the four long decades it took to build the BAM Railway. 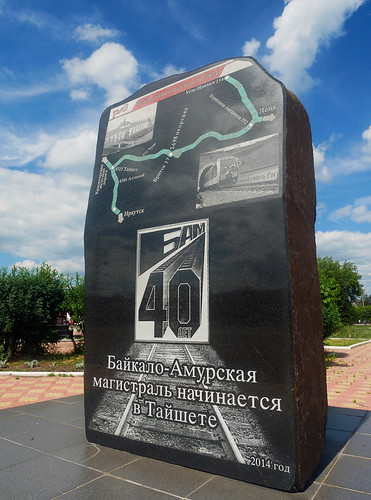 Meanwhile, Train 99, the westbound Vladivostok – Moscow service, pulls in with much gusto. Already 4-days into its journey, its got another 3 to go. Taking almost a day longer than the Rossiya to complete that stretch, it is, without doubt, the longest end to end train journey in the world. Regardless, it thinks nothing of poor old Tayshet, and is off again in a matter of minutes. 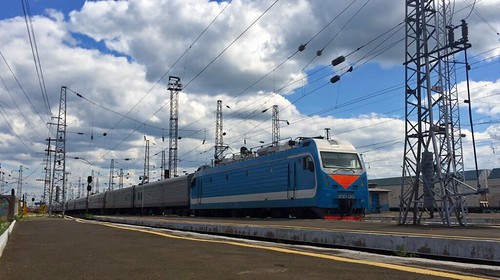 Back in room #2, we turn in for an hour or so, but the activity below doesn’t cede, so much so that I have to request SK to change the channel. Lies! No rail buff in their right frame of mind would ask for anything other than the comforting cacophony of a railway junction 😉

Awaking a little past 5, we make ourselves some coffee in the kitchenette, and head back down to the station concourse, bags in tow. Some last minute shopping for supplies, and then we head on over to track 4, to await Train 78. Granted its coming in from Novosibirsk, but Russian Railways must certainly be having a bad day, for this one too pulls in 2-minutes late. 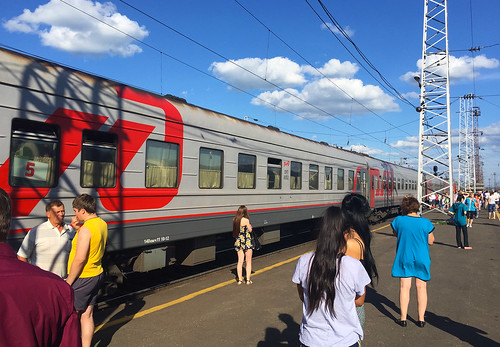 You guessed it – carriage #6 has no air con! And to make matters just a little bit worse, the only other occupant of our cabin has appalling body odor! This one promises to be an interesting journey. 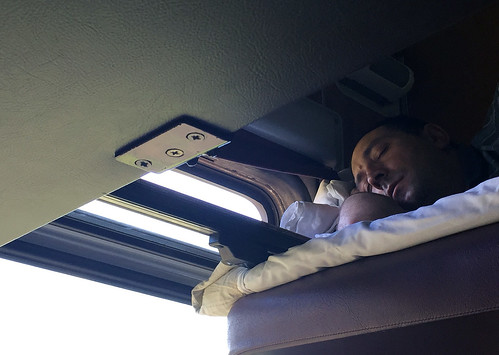 Past Tayshet‘s extensive rail yards, we’re back in Taiga country, and a familiar route once again. But we’re in for a bit of a bonus. The beautiful day is fast turning into a brilliant evening, so just when we thought about kicking back for a bit, we’re back in the corridor, craning our necks through the open louvers.

A clearing in the Taiga reveals large swaths of open meadow, where wildflowers – much like they did at the start of our day – cap off the evening with a glorious display of color. We go through a series of sweeping curves, the views intermittently interrupted by a steady succession of westbound freights, leaving us with little choice but to be glued to our windows… 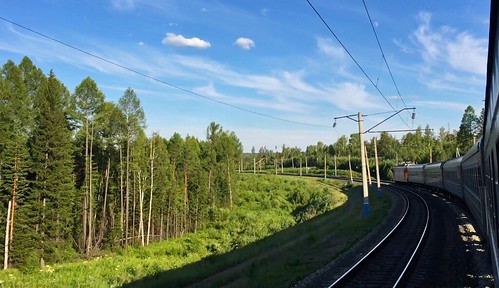 We pop open some pivas to celebrate the moment, but before we can even keep our glasses down, we enter the Uda River valley. Cresting it high initially, we gradually make our way down to the valley floor. There, wildflower bedecked meadows are framed by little Siberian villages, with the Sayan Mountains providing the backdrop. With the quality of light as it is, this is one of the prettiest sights ever. 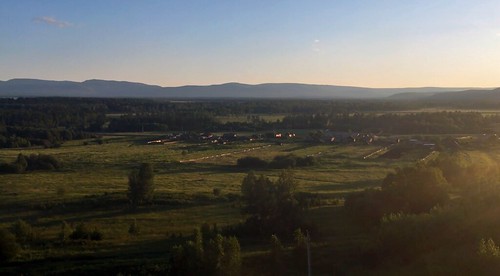 By the time we pull into Nizhneudinsk, the horizon is a fiery red – golden hour at its very best. A most memorable way to end our day. 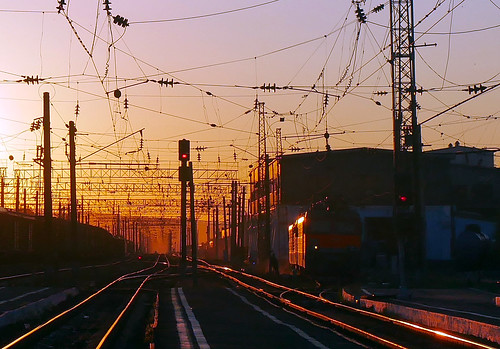 Next on the Magistrale Diaries: Baikal Magic.

A full set of pics from Day 6 of our trip can be seen here.

One thought on “Magistrale Diaries: Tayshet, and the end of the line”