Around 3ish, we’re awoken by activity at the long station stop of Novaya Chara, most of it attributed to the gent who’s just joined our cabin here. If I stay up some more, there’s a slight chance I’ll get to see one of the most bizarre sights in all of Siberia – sand dunes. But I pass. Its a little past 7 when I awake for a second time, and there’s thick fog outside. With the sun unlikely to make an appearance anytime soon, it has all the makings of an overcast day, and I’m hoping to god it stays that way.

Taksimo is our first long halt for the day, and we gain another hour here, moving a timezone closer to Moscow. We also get an additional carriage at the rear, and an electric locomotive up front – the route west of here being under wires. The station building at Taksimo is contemporary in its design, and like a lot of the major ones we’ve seen along the way, fairly well equipped too. I take advantage of the 45-minute long halt here to withdraw some cash from the station ATM. Returning to our carriage, we make ourselves some tea, and head back out on to the platform to sip it al fresco, Indian Railway-style. 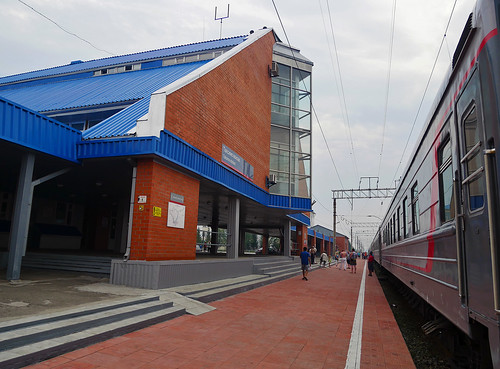 A strong odor of smoke wafts through the carriage between Taksimo and Okusikan, which we assume to be from a nearby forest fire. Controlled or otherwise, its difficult to tell, but we get confirmation of that fact moments later. A few discolored leaves at first, eventually giving way to whole burnt sections of forest. Miles upon miles of it, lending a surreal, late autumn feel to the Taiga… 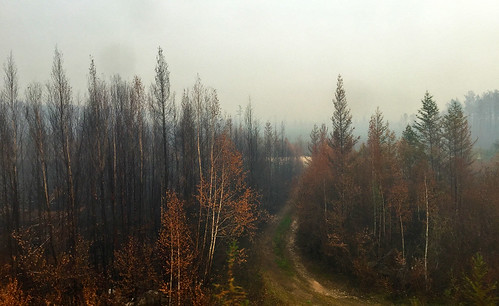 We make a brief halt at Okusikan, and then enter the 15-km (9.3-mile) long Severomuysky Tunnel, the longest in Russia. It takes about the same number of minutes to cross. 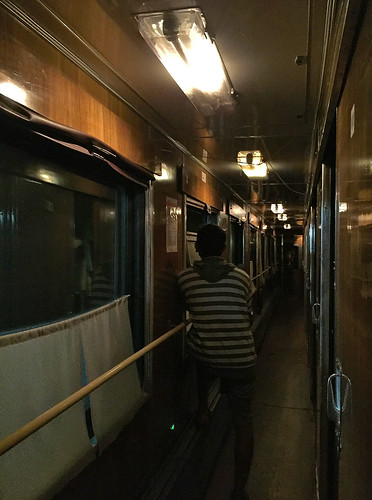 Completed as recently as 2003, the tunnel, which cuts through the Severomuysky Range, drastically reduced journey time, by providing an alternative to the much longer bypass route, known for its steep gradients and heavily restricted speed. And while passenger trains like ours have definitely benefited from it, the tunnel was really built to give freight traffic a higher throughput through the BAM Railway.

As daylight returns to our carriage, the older alignment, along with its lengthy snow shelters, can be seen to our south. It’s still in use today, since the tunnel, which took over two decades to build, remains single track. It also serves as a gentle reminder that building anything in these parts is invariably a challenging, lengthy and costly affair.

By the time we make it to the dining car for breakfast, the mountains have gotten a lot closer, and one can now see patches of snow on their higher reaches, and the paths carved out by many a melted glacier. 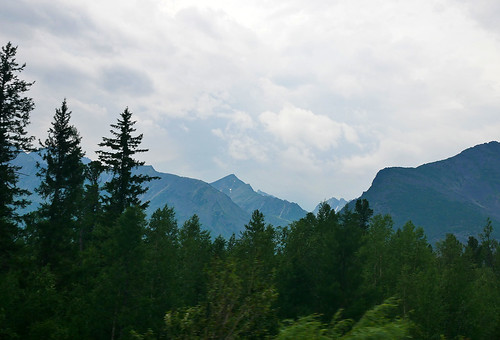 One of the down sides to the older carriages on the Russian Railways – apart from their obvious lack of air conditioning – is that they only have power outlets at each end of the carriage, and in the toilets. Not in each cabin, like we had gotten used to on the Rossiya, a few years ago. And our Provodnitsa has taken it upon herself to save the train some energy, if you please, such that you have to go request her to turn on the circuit, should you need to use one of those coveted outlets.

As we prepare to head back to our carriage from the dining car, we leave behind some items for charging, our perky waitress assuring us she’ll have them charged and ready. In exchange for some premium Russian chocolates i.e. Its a fair deal.

The stop at Novyy Uoyan is all of 13-minutes long, but that doesn’t deter a majority of our fellow passengers from alighting. Out on the platform, its a lively bazar-like atmosphere, with local vendors hawking everything from colorful headgear to smoked fish. Tasting is optional but encouraged. 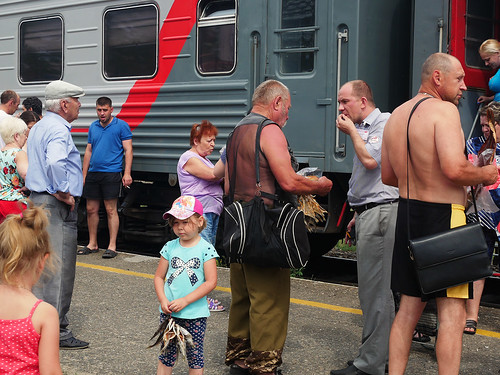 We cross the Upper Angara River not long after pulling out of Novyy Uoyan. Significantly shorter than the Angara, it flows into Lake Baikal from the northeast, whereas the Angara, much further to the south, drains the mighty lake. The mountains, that had momentarily been shrouded by clouds, reappear to our north, and are now even closer, and appear mightier than ever.

It’s a little past noon and still fairly pleasant in our carriage, especially compared to yesterday. The sun makes a brief appearance at Angoya but is obscured in no time. Its overcast again, with threatening clouds and every chance of rain. Whatever weather system we’re passing through currently has helped cool things down considerably, and we’re grateful for that.

Not long after we’re done with lunch, we sight the fringes of Lake Baikal for the first time, which inches closer to us as we continue west. Then we ride high along an embankment, with the lake clearly visible to our south, and a small settlement of colorful homes along it – the town of Nizhneangarsk. 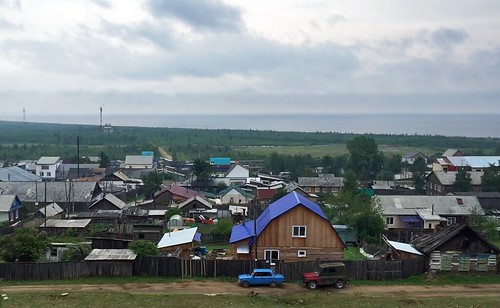 It’s an exhilarating sight – finally being able to see the mighty lake, which eluded us on our first trip through Siberia. Then suddenly, it all goes dark. Its the first of many tunnels that dot the stretch between Nizhneangarsk and Severobaykalsk, each one spitting us out on to a sweeping curve, revealing dramatic vistas of the expansive lake… 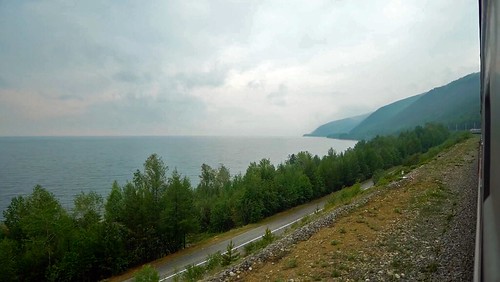 Severobaykalsk is reached 5-minutes early, and it will be our longest scheduled halt on this journey – an hour and 17-minutes, all told. 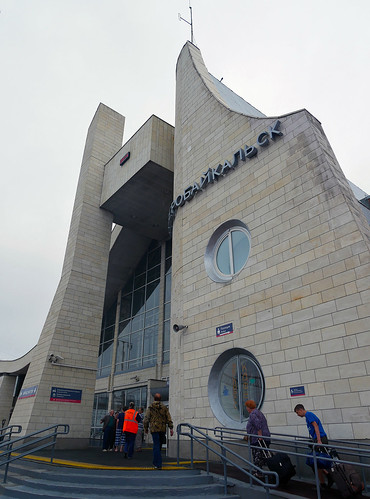 SK and my original plan would have meant leaving the BAM at Severobaykalsk, spending the night in town, and then boarding a high speed catamaran the following morning, down to Irkutsk, a journey of a full day. But the ferry operator had other plans in mind for the summer of 2017, and the rest, as they say, is history.

There’s light rain as we step off on to the platform, and it feels kind of chilly too, so we rush back in to retrieve our jackets. The temperature readout at the station displays 18C (64F), about 15C or 60F cooler than it was yesterday. Outside, in the station car park, is a makeshift market full of vendors hawking Omul, and a dozen other varieties of smoked fish, which, even if we don’t end up buying, we will surely be inhaling when we return to our carriage. 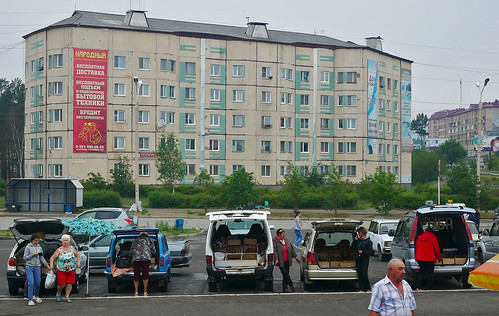 Other than a pop-up fish market, the station also boasts a barber shop, ping pong table, and a kids play area. All of that apart from the usual list of creature comforts we’ve become accustomed to finding on the Russian Rail system – resting rooms, showers, left luggage facilities and such. Another commonality across the system – the addition and subtraction of carriages at frequent intervals. We return to find that ours will now be the trailing carriage on Train 75, the last two having been detached here.

After our departure from Severobaykalsk, the clouds put on quite the show, contrasting richly with their lush green surroundings, a few of them catching a few freak rays of sunlight. Tracing the course of the Goudzhekit River, one of several that feed Lake Baikal, we eventually cross into Irkutsk Oblast, one of 85 administrative areas in Russia. Then its on to the Kunerma River valley, where the BAM twists along, through a series of dramatic curves, ensuring that we’re glued to the windows, darting back and forth between our north and south side… 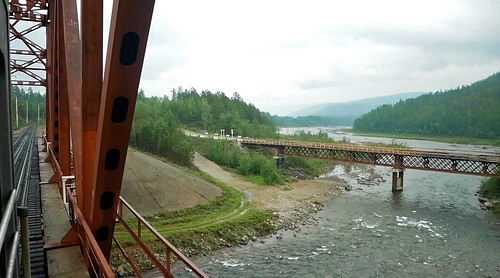 About 30-minutes shy of Kunerma, our next station stop after Severobaykalsk, we are enveloped by the 6-km (3.7-mile) long Danan Tunnel. Emerging from it, we rapidly descend a steep gradient, part of a dramatic 180-degree horseshoe curve, set amidst some spectacular scenery. With the other end of the curve clearly visible to us, this is, quite easily, one of the high points of our journey, and a tribute to the engineering feat of the BAM Railway… 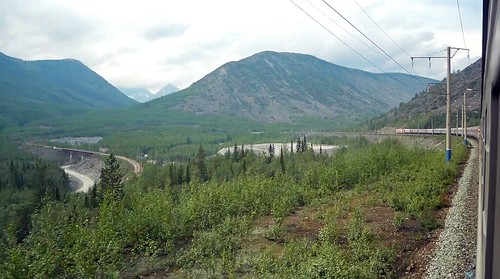 At Ulkan, we cross the Krasnayorsk – Tynda train – another perfectly executed crossing – with the eastbound service pulling out just in time to reveal a relief of Lenin, set against the backdrop of a red flag, sans hammer and sickle. 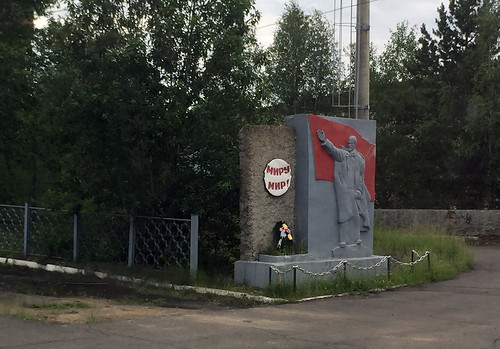 Unlike the last one we were on, Train 75 does not call at every station along our route, stopping, on average, every 65-km (40-miles) or so. But there are a few that do, servicing the tiniest of halts between Tynda and Tayshet, with the trains themselves seldom more than a single carriage in length. 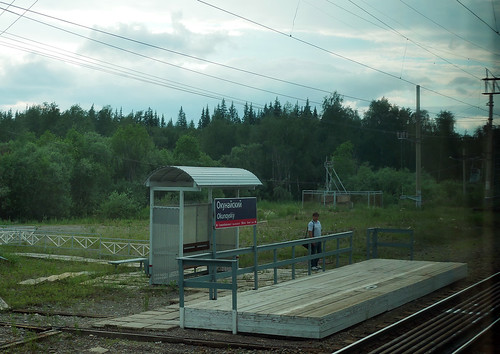 The weather has been incredibly kind to us all day, and a cool breeze blows as we step on to the platform at Kirenga, our last stop during daylight hours today… 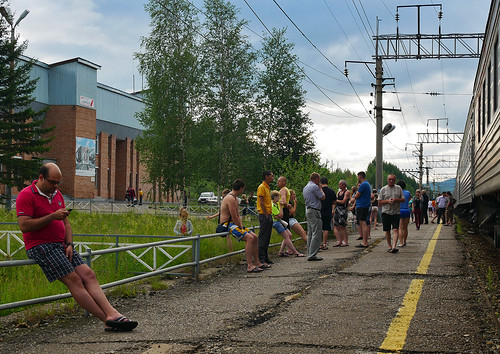 The sun peeks through briefly west of Kirenga, lending the Taiga a wonderful evening glow, but the clouds get the better of it eventually. The scenery continues to inspire though, with the occasional alpine rivulet gushing alongside the rail alignment, mountains keeping us company to the north, and a thick forest cover in-between. Between Niya and Zvezdnaya, we enter the Niya River valley, the river playing hide and seek through the Taiga, first to our north, then eventually crossing over to our south. The overcast conditions, and the sheer lushness of the area reminiscent of the Indian monsoon. 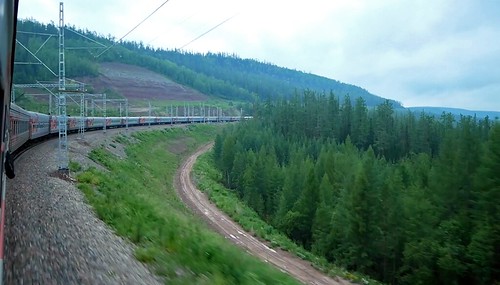 Zvezdnaya appears to be a large lumbering town, with a big mill sighted on approach to the station. In general, habitat seems to have increased west of Severobaykalsk, what with little hamlets cropping up from time to time, and a paved highway spotted on occasion. We lose sight of the Niya right after Zvezdnaya, as the railway pushes north and then west, the alignment rising significantly in the process.

We climb for about ten minutes and then make a sharp turn south, revealing the Lena River valley below. It’s quite the spectacle – Ust-kut‘s industrial outskirts twinkling brightly in the distance, miles before the town is reached. Gradually descending down to river level, we make our one and only crossing of the Lena, the easternmost of Siberia’s three storied rivers, that flow into the Arctic Ocean.

Ust-Kut is a bit of a revelation. A regional lumber center, it also boasts an active river port, a large refinery complex, and a handful of associated rail yards, turning out to be a lot bigger than anything we would have expected to find in these parts. Its station too is something of an oddity. Named after the river, its older, Soviet-style building is a complete departure from the architecture we’ve encountered on our route so far. Turns out, it was completed in 1951, when the line reached here from Tayshet, primarily to provide access to the Lena waterway. For two more decades, it remained the eastern terminus of what then began to be known as the BAM Railway. Safe in the knowledge that we have a 30-minute halt here, I finally brave the walk to the front of our 18-carriage long train… 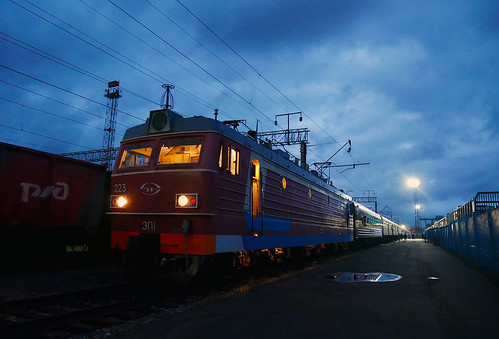 I return to find new cabin mates, Sasha and Anya, a husband and wife cop duo. SK’s ice breaking skills, it seems, won’t be required after all – the Vodka’s already done the trick. Knackered, but thoroughly content, I call it a night. SK, always the sport, decides to humor them some more. The shenanigans ensue…

Next on the Magistrale Diaries: Tayshet, and the end of the line.

A full set of pics from Day 5 of our trip can be seen here.

3 thoughts on “Magistrale Diaries: The Sacred Sea and then some”