A couple of hours before we awoke this morning, we had stopped at a place called Mogocha. A town inhabited by 12,000 hardy souls, who endure one of the harshest winters on the planet. Think -62C (-80F)! While the very thought of living in that climate sickens us, we turn our attention on Yerofei Pavlovich, our first stop on day 6, and one that marks our entry into the Amurskaya region of the Russian Far East. Even though we’ve officially exited Siberia, the forest is still dominated by Taiga, and this morning it’s set to the backdrop of low lying hills. The Rossiya, meanwhile, is now running 2 hours late, delayed further by ongoing track work. 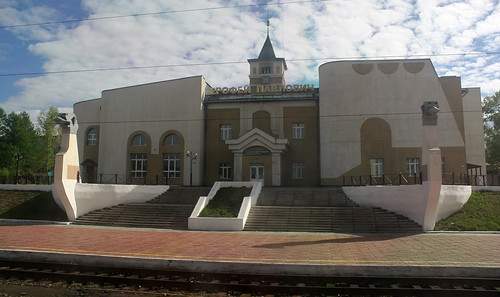 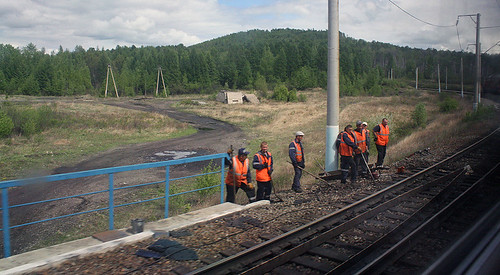 After breakfast, we pick up where we left off with Anatoly. Lena (the third instance of that name we’ve encountered on the Rossiya so far!), who’s been on the train for at least a couple of nights, couped up in her cabin for most of that time, finally comes out of hiding to join the rest of us in the corridor. She’s shy at first; has the most disarming smile, and breaks into giggles as soon as she comprehends what we’ve just said! Anatoly and Lena, as it turns out, are co-workers, and neither was aware of the others presence on the train, leave alone the same carriage, until now!

Anatoly invites us into his cabin for chay. We’ve just had one but couldn’t possibly refuse. To return the favour, we arrive with a few bags of Darjeeling Tea. But we don’t leave without being forced to stuff our pockets with cookies and candy! When the Russians make a new friend, they’ll invariably cement that relationship with food and drink. 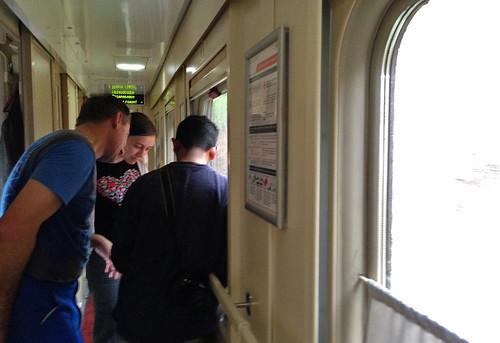 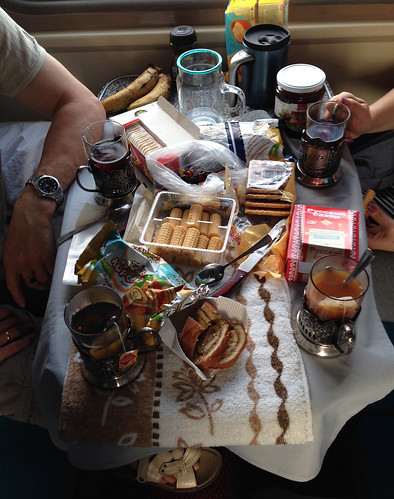 Even though we’re still riding through Taiga country, the terrain is fairly undulating here, causing the westbound and eastbound alignments to separate occasionally. Small bridges dominate the section, as there are several water bodies to be crossed. The clouds appear even more threatening today, and we can already sense that rain is on its way. On the ground, we spot several patches of snow, which haven’t ceded yet to rising temperatures.

And then, the heavens open up! The Taiga hasn’t looked this pretty yet, and one could be forgiven for believing that they’re riding through a ghat section in India. 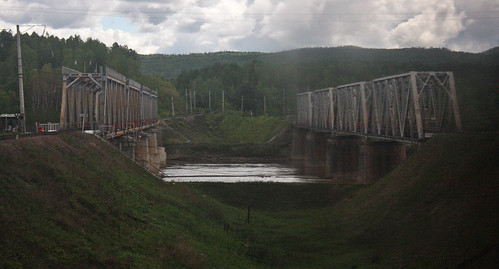 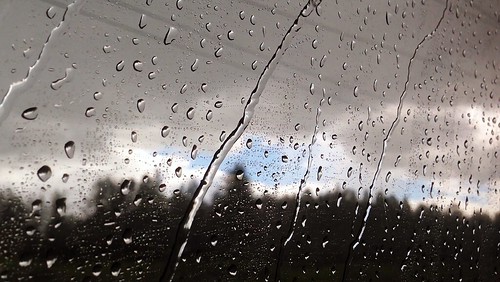 East of Skovordino, we cross a fairly long tunnel. Under the reading light, a quick glance at the map reveals that the run east to Magdagachi from here, will bring us the closest we’ve been to the China border! Vitaliy and Svetlana, cabin mates who’ve been with us the longest, will leave us at Magdagachi. We alight there for another dasvedaniya, and the Kuznecov‘s oblige us with a group photo. Olga, meanwhile, is none too pleased with our endless photography on the platform, and orders us back into the carriage. 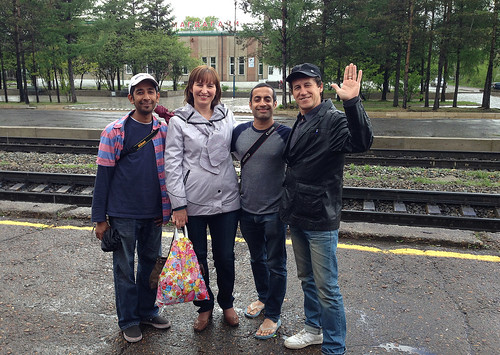 Ensuring you get back on board and securing the doors prior to departure isn’t the only task of the Provodnitsa. She’s responsible for your linen; for checking the tickets and credentials of boarding passengers; for clearing the trash; literally scrubbing the grime off the toilets; vacuuming the common areas and the carpet in your cabin; and, most important of all, making sure the Samovar continues to discharge hot water at just the right temperature! And she does this day after day. It’s the luck of the draw really which Provodnitsa (or Provodnik) you end up getting, but like her or not, always remember, she’s the one in charge! After all these days in her carriage, Olga, we hope, might just be warming up to us! 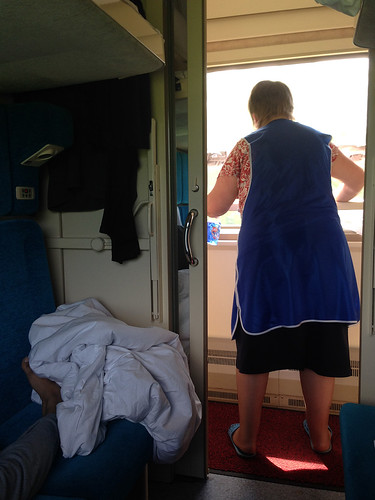 It begins to rain again as we’re pulling out of Magdagachi. In the corridor, we run into a bunch of Finnish lads, Mika, Yuha and Petre, most of whom share their last name with some of the most illustrious sportsman their country has produced – rally car drivers!  They are on a month long trip through Russia, and like us, have chosen to travel by train. But they’ve broken up their journey from west to east at least three times – the sensible way to do it, of course. They are an extremely friendly lot, excited to be meeting Indians for the first time, and eager to find out more about us. Our conversation is interrupted when SK sights a double rainbow to our east! We’ve now been treated to that spectacle twice in 3 days. 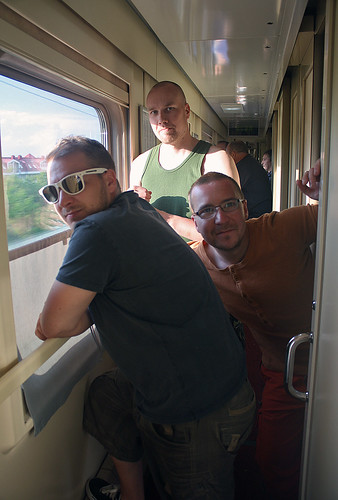 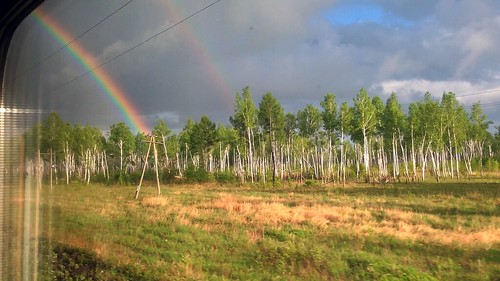 At Shimanovskaya, which curiously does not find mention as a stop on many guidebooks, we lose Anatoly and Lena. They seem to be the only ones alighting here and there is quite an entourage waiting to receive them! 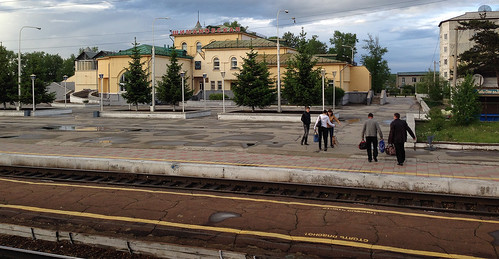 The rainbows are long gone, of course, but the play of light and shadow between the sun and the clouds continues unabated – another stellar evening in the making… 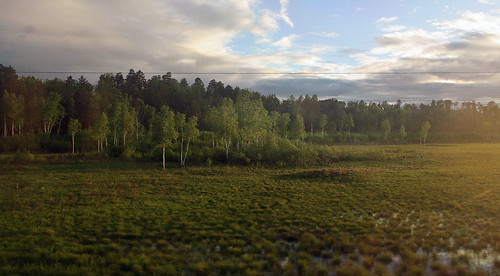 West of Svobodino, we cross the second of two freight trains carrying tanks – it might just be time to catch up with world news! Maxim joins us at Svobodino. Maxim is Ukrainian, speaks fluent English, and works as a contractor for the upcoming Vostochny Cosmodrome, not far from here. Over dinner, he tells us about his work, life in Vladivostok, and how he moved there along with his family, weeks before the conflict began. Like everyone else we’ve encountered on this train, he’s extremely pleased to have met us, and proceeds to order another decanter of Vodka.

The second longest bridge on the Trans-Siberian route is crossed shortly after Svobodino, one that straddles the River Zeya.

Belogorsk lies 60-km east of Svobodino, and it is here that we reach full capacity once again in cabin #5. Vladimir is another affable and accommodating young Russian; also speaks fluent English (it seems to be the norm the further east you travel!), and spends a few minutes learning all about our trip before climbing into his bunk to turn in for the night. Both men will alight at Khabarovsk tomorrow morning. 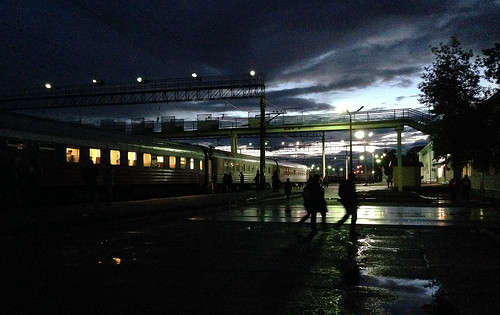 But our day is far from over. The Finns are determined to drink the night away, and they insist that we join them. With both our cabins out of bounds, we have no option but to turn to the smoke-filled vestibule, the one that lies on the toilet-end of the carriage, frequented by smokers who can’t wait as long as the next station stop! Baltikas and Vodkas are shared, and at some point e-cigarettes too, all of which contributes to a rather heady mix! Add to that the gas-chamber like conditions, and I’ve certainly had more than my fair share of involuntary nicotine inhalation for the year!

The party gets kicked up a notch when 3 young Russian Lieutenants join the fun, along with their somewhat reluctant Captain (who’s subsequently promoted to Commander by the Finns!). Many photographs, hugs and salutes later, Olga finally boots us out of there. It’s 3-hours past our usual bedtime on the Rossiya, and somewhere in between staying up that long, we also passed through the longest tunnel on the route. Oh well… 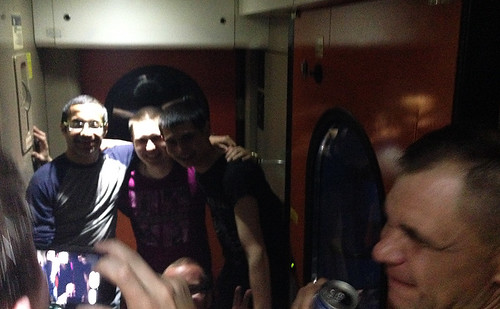 Next on the Rossiya Diaries: Khabarovsk, and the push south to the Pacific

4 thoughts on “Rossiya Diaries: Rain, Tea and Conversations in the Russian Far East”