Having set our alarms for 22:50 Moscow time, we awake just as we’re pulling into Ulan Ude. It is just shy of 4 in the morning local time and Igor, the Provodnik who’s taken over the night shift from Olga, is baffled to see us up and about. But this isn’t just another station on the Trans-Siberian – it is the junction for the storied Trans-Mongolian route, and we have stepped off the Rossiya to pay our respect. Our efforts pay off almost immediately! Across the platform from our carriage stands a steam locomotive – not another plinthed one this time, but one that’s actually in steam – bookended by a diesel on one end and an electric on the other! What more could we possibly ask for? 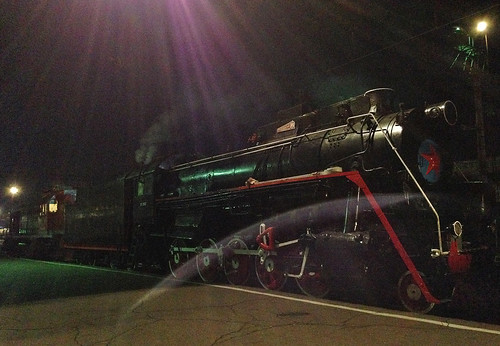 We’ve gained another hour over Moscow, as we awake for a second time this morning, and, horror of horrors, the Rossiya is running late! Track work is to blame. Quite understandable actually, when you consider that the railways have only a handful of months available to them, in which to repair and renew their tracks. On our run up to Khilok this morning, rail replacement is being done on a war footing, but through it all, the priority accorded to the Rossiya is incredible. In sections unaffected by renewal work, freight trains wait back to back on the eastbound track, while our train is routed onto the westbound mainline, passing them all in one clean swoop! 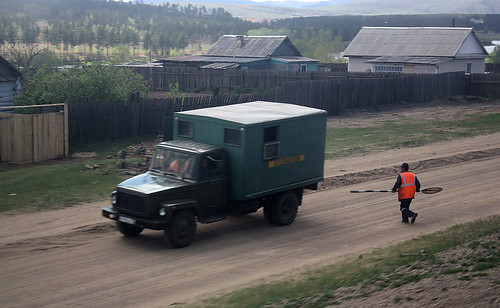 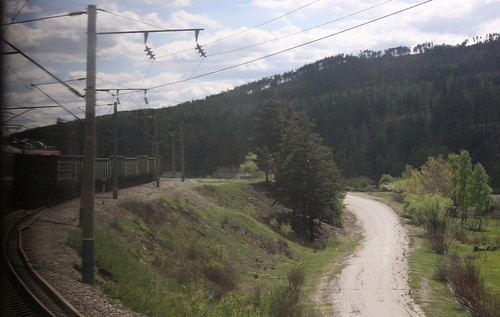 The route east of Khilok is one of the prettiest we’ve been through so far, the railway making its way through the Khilok River Valley, part of the Yablonavy mountain range, which will accompany us for most of the day. Hugging the north side of the valley, the alignment runs at a significant elevation to the river, providing great vistas all along. To perk things up just a little bit, the sun is out in full force, making this the brightest day on our journey. 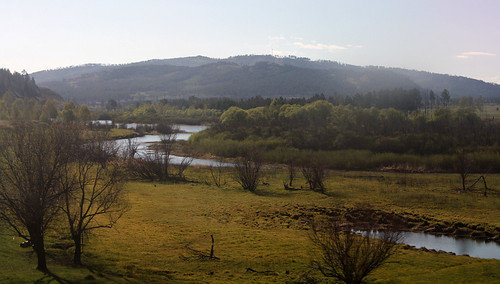 The best views are all to the south though, which means we spend more time in the corridor than we do in our own cabin. Sergei, the first person we’ve met on this journey who speaks English, is also the first to befriend us here. He works for an organization that liaises between the Chinese and Russian railways, specifically dealing with cross border freight on the Trans-Manchurian route. He doesn’t just speak fluent English, but Mandarin too, and proceeds to explain the nuances of his native language versus that spoken across the border. He then goes on to profoundly apologise for the late running Rossiya, and the occasional bits (read “bits”) of garbage strewn trackside. We don’t have the heart to tell him what the reality is like in India! 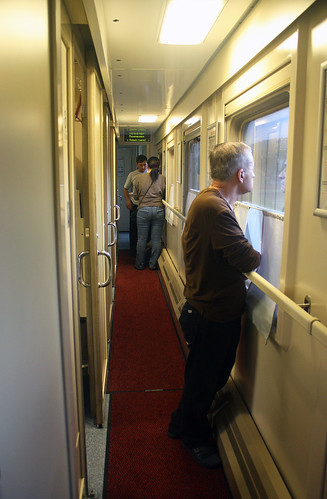 Just east of Mogzon, at the 6130-km mark, we cross the highest point on our journey – a rather tame 1040 metres above sea level! On the run up to Chita, we pass several water bodies, big and small, and on our approach to the town, a largish lake too. Sergei bids us goodbye at Chita, and the Rossiya is now a full hour late. Chita appears to be a large industrial town, and is also the jumping off point for the Trans-Manchurian route. If its any give away, station signs here are in Cyrillic and Mandarin! 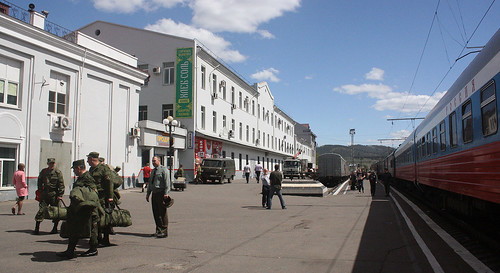 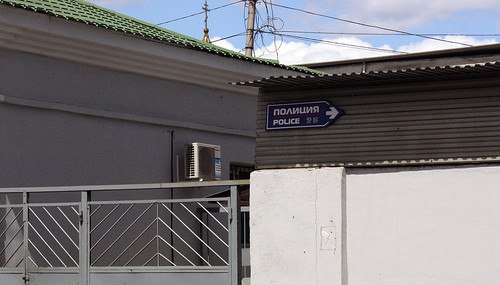 The Ingoda River Valley is next, and the river comes into view shortly after we’ve cleared the outskirts of Chita. The rail alignment, yet again riding the natural contours of the northern bank, goes through a seemingly endless number of S-curves, the front and rear of our train always in view, and a lot of the westbound trains easily sightable well before they cross us. A little past Tarskaya, a snow shelter can be discerned in the distance, straddling the tracks for quite a while. Shortly after, the alignment for the Trans-Manchurian heads off south, crossing the Ingoda as it does so. 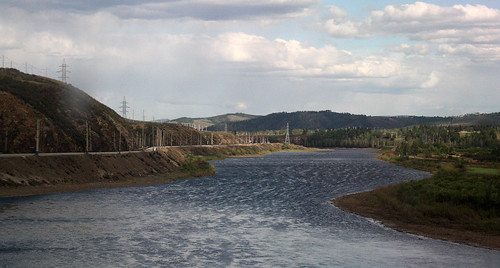 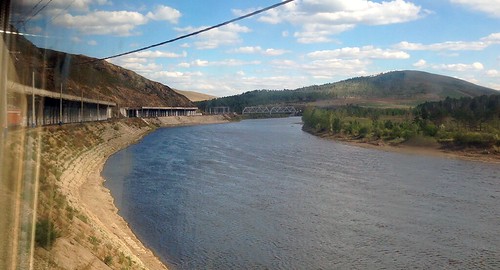 While the most riveting views have all been to the south so far, the north side is no less inspiring. Small grassy mounds to begin with, eventually giving way to expansive rolling meadows. Its quite unlike anything we’ve seen on our journey so far, and never mind the Taiga, at times, there’s nary a tree in sight! 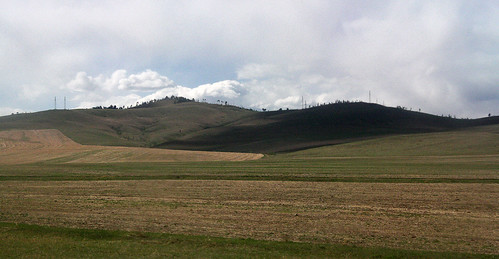 Meanwhile, the Ingoda continues to meander along gently, getting tantalizingly close at times, and at others, appearing deceptively far. In those instances, lush wetland separates the rail alignment from the river’s course, and completing the picture on the south bank is the Taiga, set against  the backdrop of the mountains. 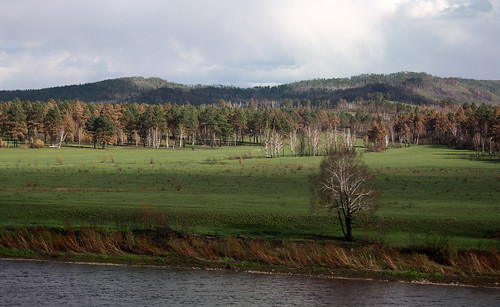 The habitat increases significantly east of Shilka-Passazhirsk, a town named after the Shilka River, who’s valley we now enter. The river itself is formed by the confluence of the Ingoda and the Onon, but its valley is more verdant than any we’ve seen in Siberia. The brimful river is quite wide in places and through its course lie a handful of river islands. 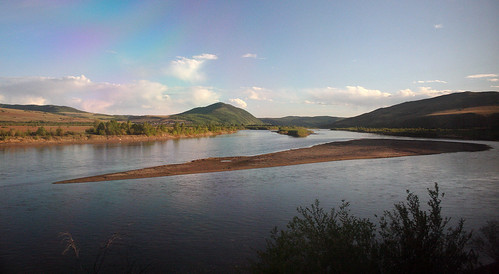 Little hamlets appear from time to time along its north bank, characterized by the typical wooden homes found in Siberia, gaily painted window shutters et al. Most houses are adjoined by little plots of cultivated land, and livestock grazes the fertile flood plains around. The river itself must be very healthy, for anglers appear at frequent intervals along its banks. On the south bank, wild horses can be seen grazing amongst the ruins of abandoned churches. 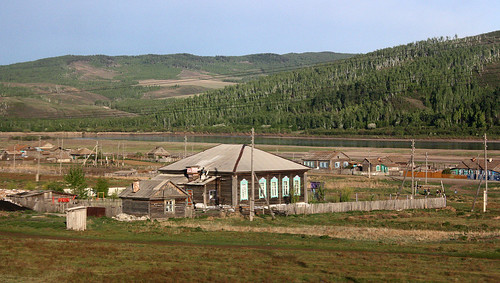 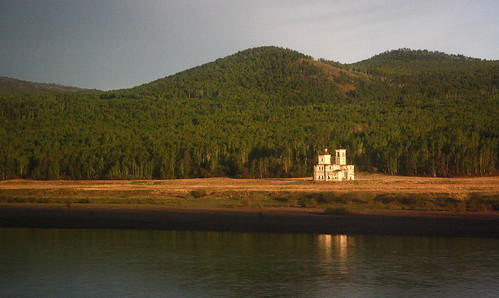 We make new corridor friends in Anatoly and Kostya. Anatoly knows a few words of English and is eager to practice them on us. SK obliges yet again, his well used phrase book on the ready. The evening light is incredibly pretty, accentuating every little feature across the Shilka River Valley. Between conversations, we stop and stare. 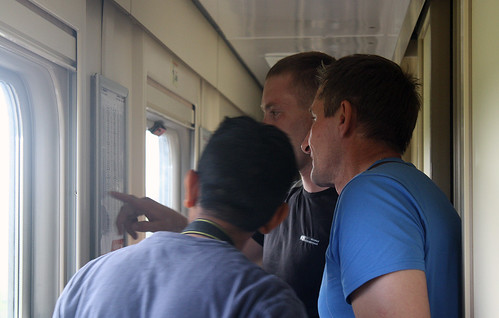 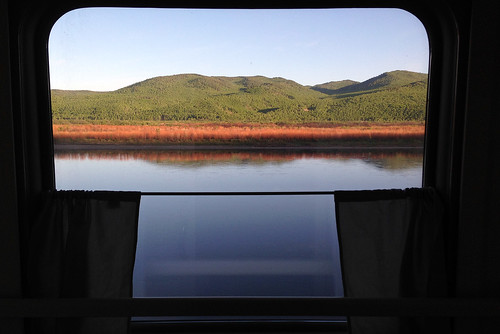 Llena serves up an excellent bowl of Borscht in the dining car, as we raise our cans of Baltika to toast day 5. It’s 10:15 pm local time. Outside, it’s magic hour! 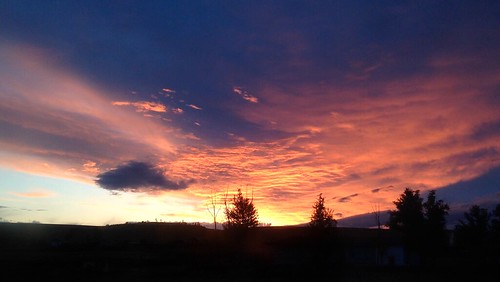 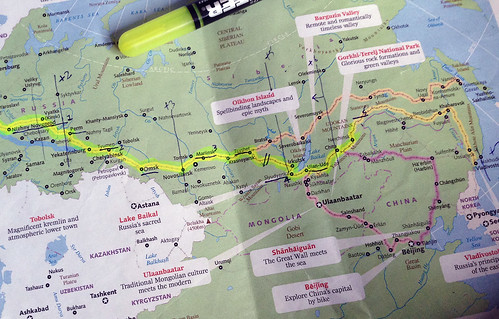 Next on the Rossiya Diaries: Rain, Tea and Conversations in the Russian Far East

4 thoughts on “Rossiya Diaries: Through the River Valleys of Siberia”