As we slept, our train would have crossed the Yenisei, the largest of the rivers that flows into the Arctic Ocean, and one that marks the border between western and eastern Siberia. Ilyanska is our first stop in the latter, and although not as cold as Omsk, it still has an old world feel to it. Indigenous people can be seen in larger numbers on its platforms, and the women in particular look markedly different. The offerings amongst the platform vendors has increased too, with smoked fish from nearby Lake Baikal being one of the more prominent additions. 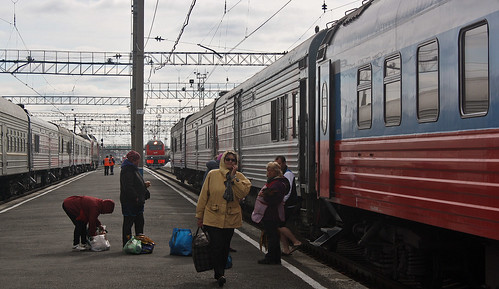 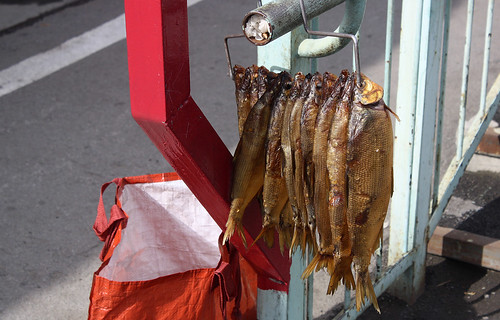 Availability of suitable food and beverage is an obvious cause of anxiety to most foreign travelers on the Trans-Siberian. Be rest assured though, there is plenty of it available and from a variety of sources too. It does make sense stocking up on some basic supplies beforehand (disposable tableware, condiments and such) but between platform vendors, station food kiosks and the Rossiya‘s own dining car, you will have pretty much all your bases covered. Station vendors stock everything from boiled eggs to smoked meats; from common fruits and vegetables to fresh bread (khlep). At some stations, the food stalls are more like mini marts, with offerings that go beyond just food items.

On the Rossiya‘s dining car, menus are bilingual, even if your waitress is not, and although prices are significantly higher, having a meal there a day wouldn’t exactly break the bank. As we’re still learning though, servings can be measly for some items, so order as wisely as you can. When in doubt, the soups are a great choice. From time to time, a grumpy old man with a rather mournful voice comes along from the dining car, hawking a few wares, beer and sodas included. The Provodnitsa too stocks a few of the popular snacks, so you’re pretty well catered on board.

And then there’s the good ol’ Samovar, a mainstay on Russian trains, and a standard feature on each sleeper carriage. Think tea, coffee, hot chocolate, soup, noodles or instant porridge – anytime you crave it! 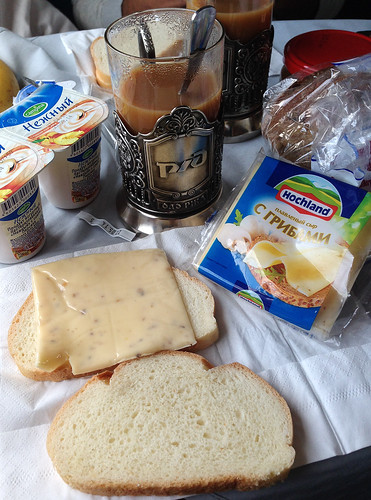 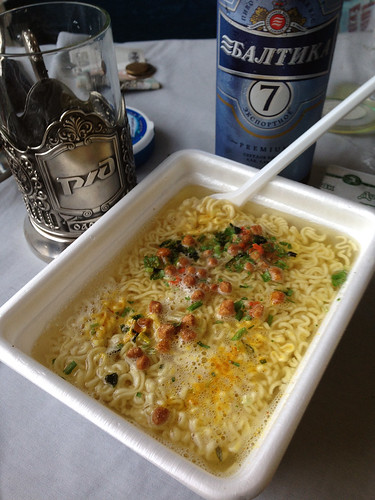 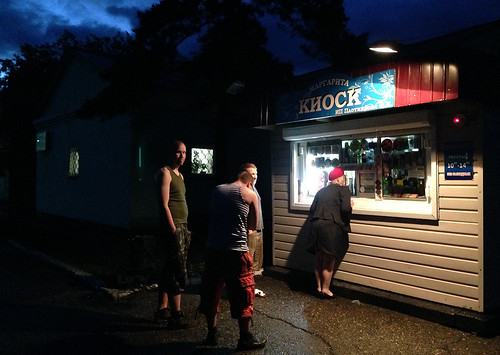 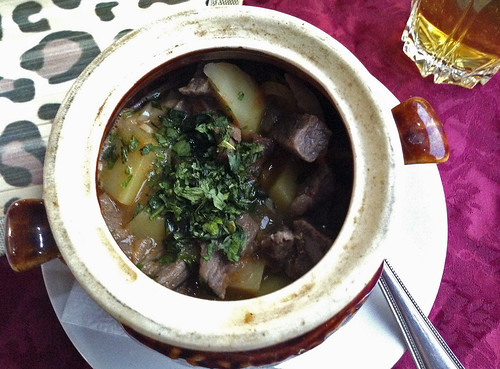 After breakfast, Vitaliy takes the initiative, fishes out his Russia road atlas and traces the route west they had taken from their home in Magdagachi.  The train is a much better option, he assures us! As we pull into Tayshet, the Trans-Siberian’s westernmost junction with the Baikal Amur Mainline or BAM (another long and storied rail route in Russia), Vitaliy points out the Vokzal building, and the steam loco plinthed adjacent to it. The language barrier has finally been broken, and we are somewhat relieved, cause Magdagachi is still a couple of nights away, and they will be our traveling companions till then! 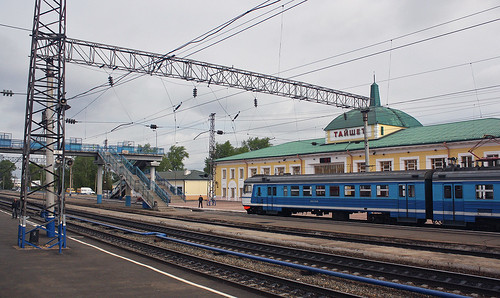 The route has been a lot more undulating today, especially so east of Tayshet, as we begin to skirt the foothills of the Sayan Mountains. And mountains invariably necessitate curves in the alignment, which means we can finally get to see the rest of our train. A little frustrating though, as you can’t photograph it nearly as well as the eye can see! Between Tayshet and Tulun, lies kilometre marker 4644, the half way point on the Trans-Siberian route. Shortly after, we cross a streak of deep blue carriages, the Trans-Manchurian Express headed west! Both trains, at this point, are 5 time zones ahead of Moscow. 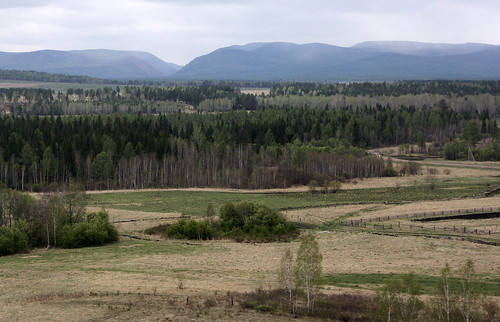 Keeping time. The Rossiya seems to be doing a jolly good job of it. Remarkable, in fact, if you consider the staggering distance it covers. We are on day 4 of our journey, and we have yet to arrive or depart a station a single minute late! But keeping track of time is quite the task when you’re a passenger. It probably won’t bother you for the first day or two, but by day 3, your sleep schedule, and at the very least, your meal timings, will be out of whack!

Russian railways span 8 time zones, but in a concerted effort to remind everyone’s who’s in charge, they follow Moscow time! The common recommendation is to have your watch on Moscow time and let your smart phone do its thing. But smart phones can only do so much. Cellular service is spotty along the route, and cell towers will not relay zone information quite as reliably as they should. So, for instance, when your cell phone reads 09:10 at Barabinsk, local time there is quite possibly an hour ahead. The platform clocks don’t help either, all of them defiantly displaying Moscow time. And then there’s the long daylight hours to contend with!

The best way to beat the clock, we’ve realised, is to work backwards from when you intend to turn in at local time. The timing of your meals is crucial too. More often than not, breakfast ends up being too late, so you do a light lunch and then catch up with the local clock by dinner. If push comes to shove, and your struggling to fall asleep, a shot of Vodka does the trick 😉 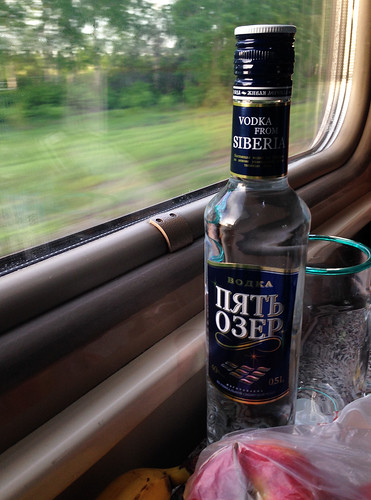 The Taiga today is a lot more setback from the track than it has been previously. We are riding through the prime logging belt of Siberia, and large sections of Taiga have been cleared for the same. Amongst the plethora of logging settlements along the way, Tulun is easily the most notable. Partly industrial today, it is often referred to as Siberia’s “Timber Capital”. 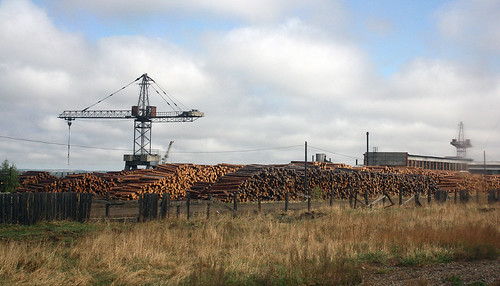 About 150-km east of Tulun, and the next stop for the Rossiya, is Zima. A nondescript town, the name Zima literally translates into winter! In the unusually long 30-minute halt that we have here (another locomotive change, of course!) we’re glad to be strolling its platforms in slightly warmer climes. 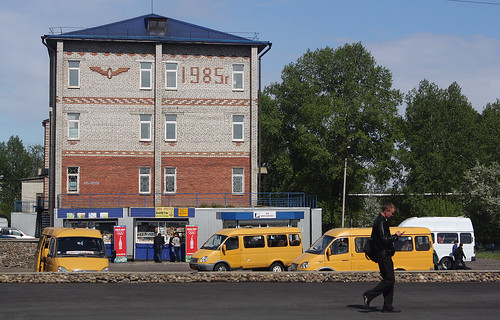 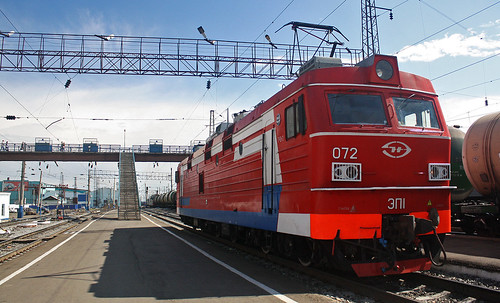 East of Zima, the terrain is more highland-like, providing a welcome break from Taiga country. The railway twists along, rising up and down with the natural contours of the land. We pass through our first rock cutting here. The Khabarovsk – Moscow highway, a busy 2-lane affair, comes into view, paralleling the rail alignment for several miles. Along with it come overcast conditions, threatening clouds et al. The question is, will there be rain? 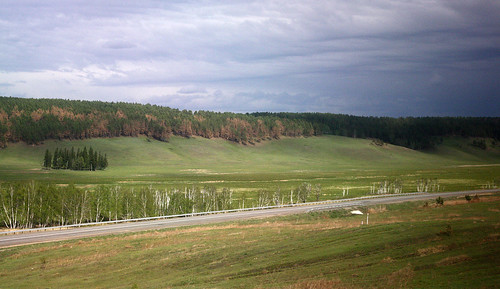 Not far west of Irkutsk, a long barbed-wire protected wall and intermittent watchtowers are the telltale signs of a military base. Behind it all, we spot at least a few dozen tanks! They aren’t serviceable, of course, but regardless, a reminder of the cold war that was. And then, it begins to pour! SK, who lives in the very dry state of Arizona, is thrilled to finally see some rain. 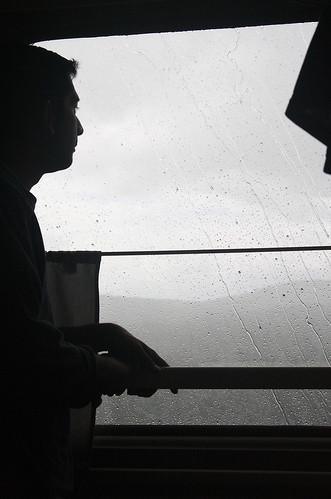 Through it all, we cross the Irkut River, a few km from the city centre. Pulling into the station, the sun breaks through, and by the time we are on the platform – umbrellas in hand – a double rainbow welcomes us! It’s cold, windy and very wet at Irkutsk, but the light is incredible and we couldn’t have timed it any better. 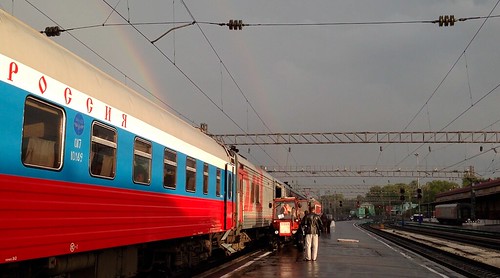 While we’re busy clicking away, Vitaliy dashes down the platform and returns with a chilled Baltika each for SK and me! We are most touched. Over beer, smoked meats and khlep, we celebrate the moment, and the culmination of day 4 with them. The Russians have, by now, overwhelmed us with their warmth and friendliness. 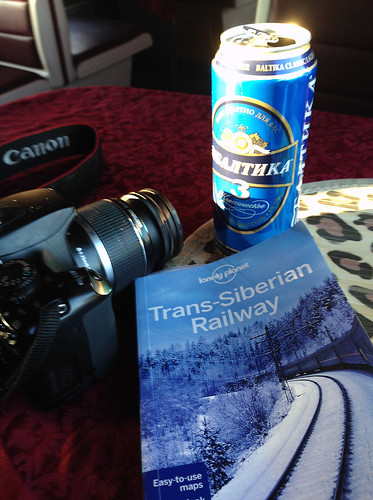 North of Irkutsk station lies the Angara River, which comes into full view as we pull away from the platform. The Trans-Siberian route was realigned significantly in the 50’s to allow for the overflow from the Angara dam project, so minutes out of the station, the Rossiya veers sharply south, leaving the old alignment (still partially visible) behind. 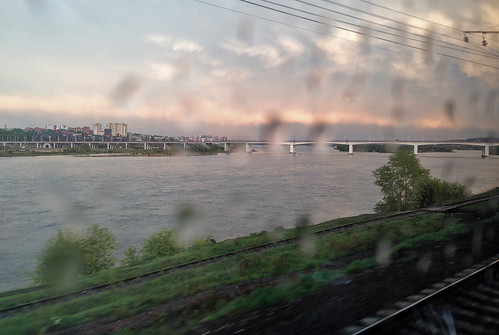 Irkutsk, once a Cossack garrison, then a Siberian trading post, is today the most popular stop for travelers visiting nearby Lake Baikal. And while the Rossiya does spend a good 4-hours skirting the southern shores of the world’s largest freshwater lake, we won’t be seeing any of it this evening. It’s going to be closer to 11 pm local time that we’ll come up to within sighting distance of the lake – just a little past twilight, unfortunately!

But the run up to there is no less exciting. Brilliant evening light leaving Irkutsk, followed by a steep ascent up to a mountain pass shrouded in thick fog, with snow still sticking to the sides of the rock cutting. A long tunnel, and then we emerge on the other side of the mountain to the lights of Slyudyanka, shimmering on the Sacred Sea of Russia. A fitting end to a smashingly good day on the Rossiya! 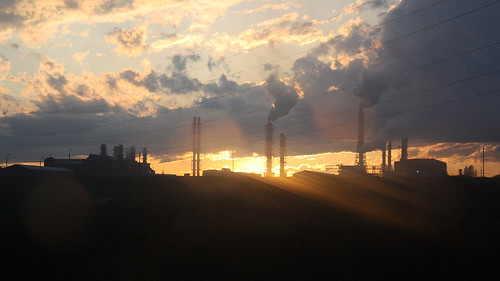 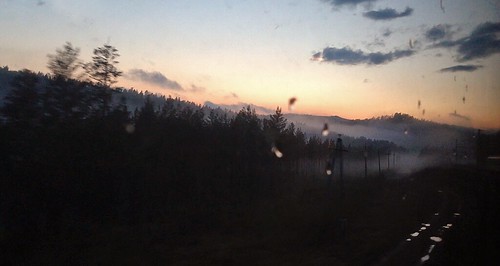 Next on the Rossiya Diaries: Through the River Valleys of Siberia

One thought on “Rossiya Diaries: Baikal, the Sacred Sea”