The 19th day of October ’08 marked a full year since I began partaking in cycling tours across NYC. Around the same time last year, I did my first ever 25 mile (40 km) ride – the Tour De Bronx. Last Sunday, I rode the Bronx tour again and with it culminated a year full of tours for me.

The Five Borough ride in May, with its 42 grueling miles (67 km), had been precedent setting – for me – at the very least. That was followed by the Tour De Brooklyn (18 miles – bah!) and Tour De Queens (a tad more at 20 but with unforgiving heat for company!). And then, the weekend before I left for India, came the big one – the NYC Century! The mileage options were plentiful with 100 obviously being the ultimate. I chose the more conservative 55, although, that in itself was going to be quite a big step up for me!

And so it came to be.. the early morning of Sunday, September the 7th. The location: North end of Central Park. The start time: 7:15 am. 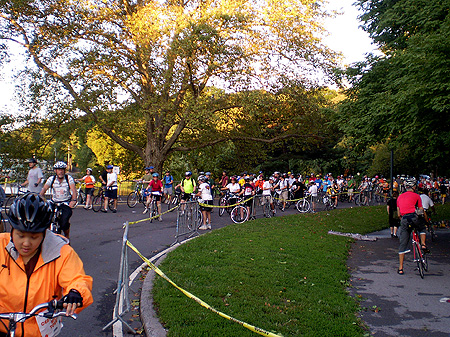 The days leading up to the ride had been warm and awfully sticky. It was expected to be overcast for the first half of the day with equally high humidity as before. I was expecting another Tour De Queens experience, only with 40 more miles thrown in! Miraculously, however, it turned out to be the most gorgeous day possible and simply perfect conditions for riding. Not a cloud in the sky, comfortably low temperatures and humidity that didn’t seem to bother me at all.

Heading west out of Central Park along 110th St, we hit the very scenic Riverside Drive, traveling about a mile south along it. Turned east on to 96th St and finally headed south along Broadway for the rest of our route through Manhattan.

This was to be a ride of many ‘firsts’ for me. My first time (and probably last!) biking through Times Square, for one.. Where empty Sunday roads allowed us to take over as many lanes as was possible! 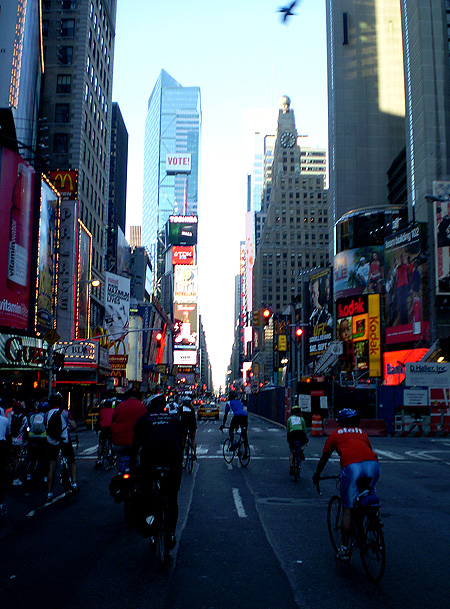 Herald Square – refreshingly devoid of its masses – was crossed next and that was followed by Madison Square, where we passed the newly created pedestrian plaza, under the watchful eye of the Flatiron Building, dazzling in the morning light. 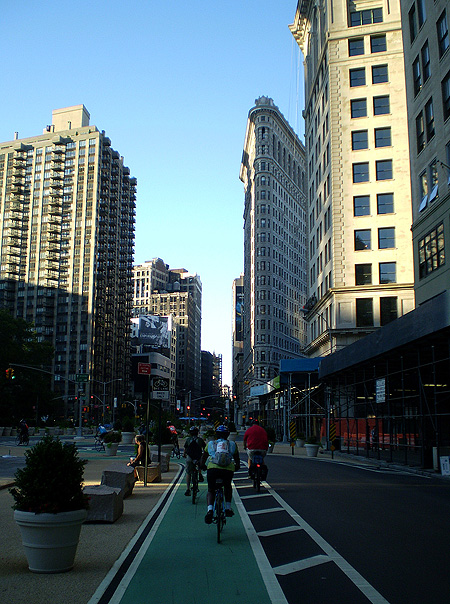 An emptier than usual Union Square was crossed next and with that we entered Greenwich Village. The riders had fanned out into smaller groups by now and I kept pace with one such group. What separated this ride from the 5 Borough ride was that there were no ride marshals or police escort accompanying us and there were certainly no roads closed of for us. We were to ride with traffic and obey traffic rules. At the Houston St intersection, with SoHo ahead of us, that’s precisely what we did! 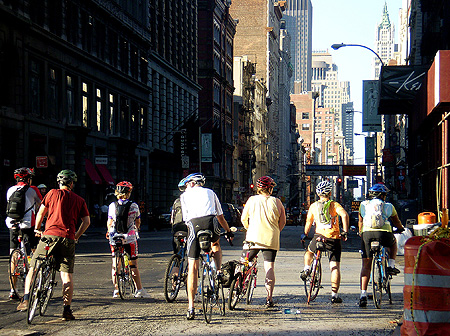 I had, over many months of cycling, biked across several bridges in the New York area but surprisingly, not the most storied of them all – the Brooklyn Bridge. So crossing it, on this fine Sunday morning, was another first for me! 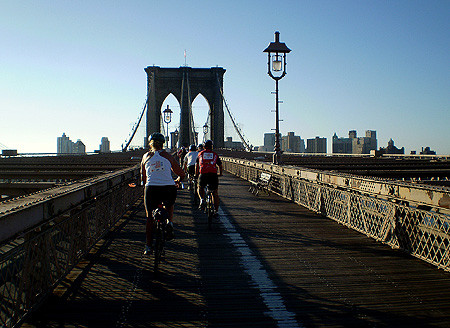 The first 15 miles brought up Prospect Park – our first rest stop. The route that followed was through some of Brooklyn’s most charming neighbourhoods – Brooklyn Heights, Carroll Gardens and Park Slope, to name a few. Henry St, with its rows of brownstones and plenty of foliage, looked picture perfect with the morning light streaming through. 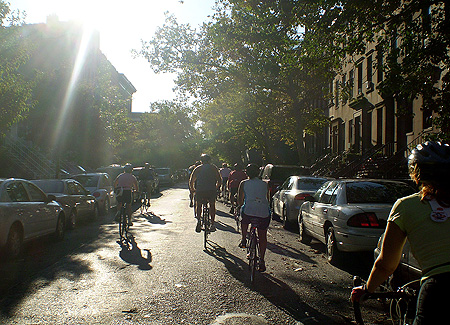 Carroll St is another charming street through the heart of brownstone Brooklyn. The Carroll St Bridge over the Gowanus Canal splits the neighbourhoods of Carroll Gardens and Park Slope. The little bridge is a lot quainter than what meets the eye. Built in 1889 and still boasting a surface of wooden planks, it is the oldest operational retractile bridge of the four remaining in the US. Having had no inkling of that fact on the day itself, I now feel honoured to have crossed it! 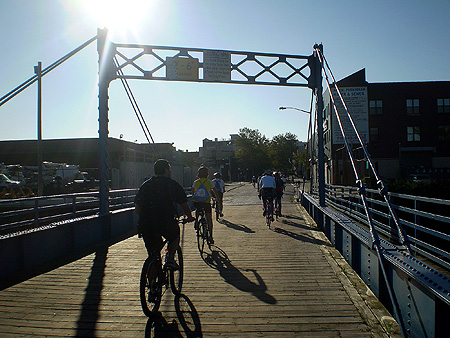 Through the neighbourhoods of Sunset Park and Bay Ridge, we emerged on to the beautiful promenade along the Shore Parkway. Four continuous miles of greenway along Brooklyn’s premier waterfront – including a crossing underneath the mighty Verrazano Bridge. 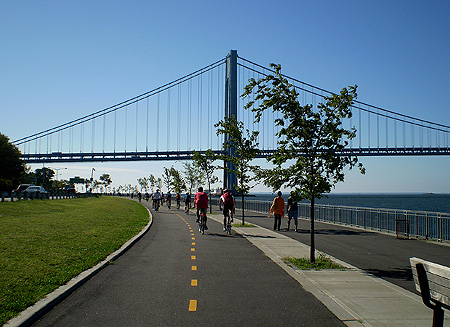 Leaving behind the waterfront briefly, we went though the neighbourhood of Bensonhurst, to emerge near the water again at Coney Island. It was nice to see the now familiar sights of the Parachute Jump, Keyspan Ball Park, Nathan’s Hot Dogs, and the beautifully renovated station of Coney Island. But it was equally sad to see the iconic ‘Cyclone‘ roller coaster, on, what would be, its last day of operation. 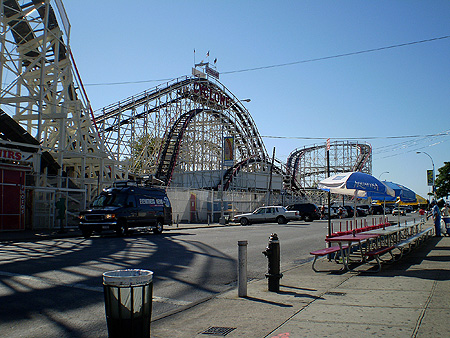 Heading further east, we rode through Gravesend, Sheepshead Bay and Canarsie, hugging the coast line for the most part. At one instance, closer to our second rest stop at Canarsie Pier, one could spot the distant yet distinct lines of the Marine Parkway Bridge, connecting the mainland with the Rockaway Peninsula. 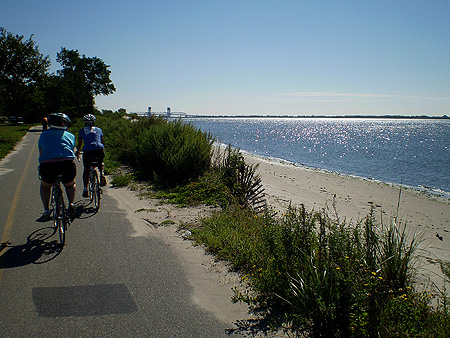 At the Canarsie Pier rest stop, the 100 mile riders split from us. They would continue east into Queens while the 55 and 75 milers would head back north through Brooklyn into Queens.

The crossing into Queens was by means of the Pulaski Bridge, over the Newtown Creek, with the Manhattan skyline looking resplendent on that beautiful summer day. 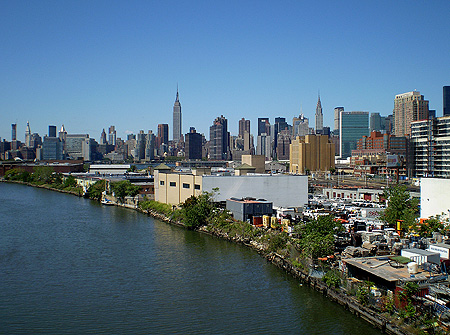 With less than 10 miles to go to the finish, we made our third and final rest stop at Astoria Park in Queens. Under the shadow of the Hells Gate Bridge, volunteers doled out copious helpings of snacks and beverages, whilst a train (not seen in pic) passed by over head, setting the mood just right 😉 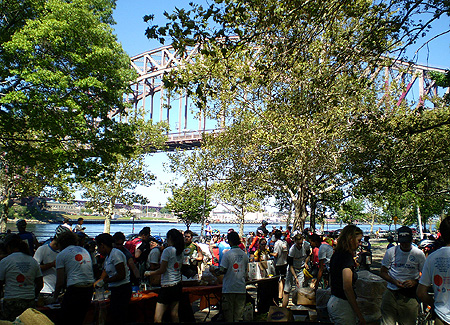 The second major bridge for the day – the Triborough Bridge – was crossed soon after leaving our rest stop. It would take us out of Queens, over the East River, into Randall’s Island.. 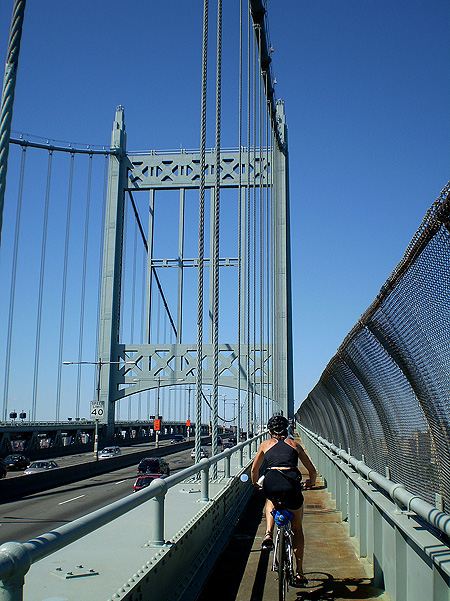 Being an island, we had to cross the River yet again, in order to enter Manhattan. We did so by means of another unique bridge – the Ward’s Island Bridge. A lift bridge by design, it is the only ‘bicycle and pedestrian’ bridge in the city! Needless to say, that crossing too was another first for me! 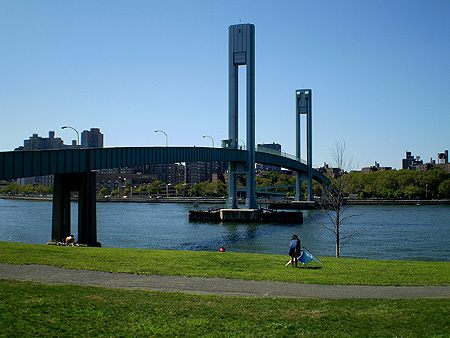 Back in Central Park, we picked up our free tee shirts, queued up for Cookies and Italian Ice and enjoyed a live music performance by the Ginger Ninjas! Known for their pedal generated electricity, the Ginger Ninjas use bicycles to transport themselves, their equipment and of course power their performances! No doubt, an apt choice of band for an event such as this. 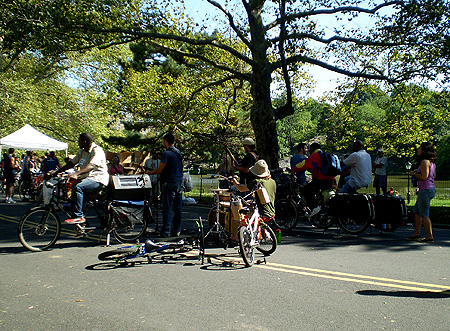 For the day’s efforts, my odometer clocked in at a little over 60 miles. While that didn’t quite qualify as a century in the American sense, it certainly did so in the Metric sense – which I am partial to in any case 😉

One thought on “Half a Century and change!”