Summer Streets ’08 – the Bloomberg administration’s answer to Albany’s ineptitude at passing the Congestion Pricing Bill! Seven miles of prime Manhattan roadway, off limits to automobiles, for three consecutive Saturdays! The results, overwhelming! The highlight for me, being able to bike up the ramp leading to Grand Central station – a road which is out of bounds for pedestrians and bikers on every other day!

That was Saturday # 2 of the city’s experimental car-free-streets initiative but I was headed much further north on that particular day – to the very northern tip of Manhattan. The plan was to ride north along the Harlem River on Manhattan’s east side, reach the tip and then ride down along the Hudson River on the island’s west side.

The Willis Ave Bridge marks the beginning of the 8 mile long Harlem River and is the first of 13 bridges that span the river. The 107 year old structure is one of six swing bridges over the Harlem River and a sign over the walkway reminded one that the ‘swing’ in the bridge had seen busier days! 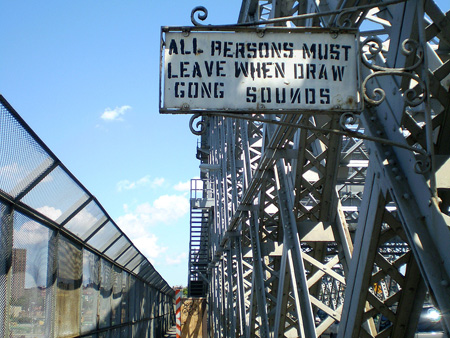 Our chosen route would take us through the Bronx, a few miles north along the river, and then cut back across to Manhattan. Looking north from the bridge was the colourful urban vista of upper Manhattan to our left, the Third Ave Bridge spanning the river in the middle, and the Mott Haven section of the Bronx to our right. 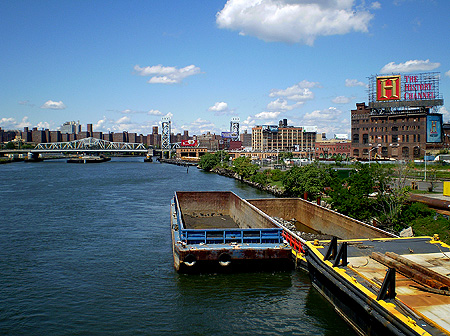 A couple of miles after riding through the Bronx, we passed the soon-to-be-demolished 83 year old Yankee Stadium building. On a site adjacent to it, stood a much larger stadium – nearing completion, it would take over from it next season. 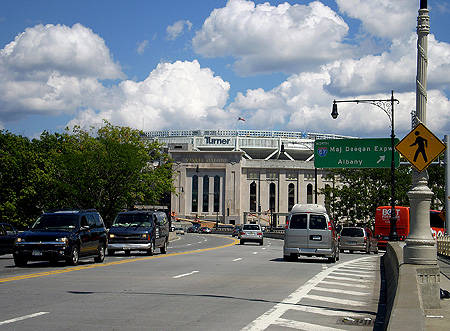 To cross back into Manhattan, we used another swing bridge. This one more impressive looking than the last and with an impressive sounding name to boot! The late 19th century Macombs Dam Bridge.

The views were a lot more pleasing to and served as a bit of a teaser to what lay ahead – three beautiful arch bridges spanning the Harlem River and an old stone water tower, rising high above it all.

The first amongst these was the very reason for the ride! Dating back to 1848, the ‘High Bridge‘ is the city’s oldest bridge, and I had been wanting, for the longest time, to see it up close.

Designed by the same team that built the stunning St.Patrick’s Cathedral in Manhattan, it was built as an aqueduct – part of the larger Croton River Aqueduct System – to carry water into the city. Today, it continues to stand tall, albeit inactive! There are plans to convert it into a public space – for bikers and pedestrians alike – and in doing so, create an extension to Upper Manhattan’s High Bridge Park.

Not only did I finally get to see the bridge from such close proximity, I also managed to ride on one of the most under-rated and under-utilised greenways (bike paths) in the city. Over two miles of river front promenade, alongside the Harlem River Drive, with a lot of shade, manicured greens and nary a soul!

The greenway and the ‘greens’ around it are maintained by the City’s Department of Parks but there have been some recent private initiatives to. Swindler Cove Park and the Peter Jay Sharp Boathouse to name a few. Both spearheaded by none other than city resident and notable actress Bette Midler!

Inwood is the northernmost neighbourhood in Manhattan and forms the apex of the island, bounded by the Hudson River to its west and the Harlem River to its east. Originally settled by the Irish and Jews, its population is mostly Dominican today although rising real estate prices in the area have recently resulted in a fair amount of gentrification.

A short ride through the very vibrant Dyckman St – one of its main thoroughfares – was enough to convince me of that fact. But the street(s) or intersection this hood is best known for, is without doubt, the one on the way up to Inwood Hill Park 😉

Spanning an area of almost 200 acres, Inwood Hill Park boasts of the largest remaining forest land on Manhattan island. The park is undulating for the most part, boasts several trails through its thick woods and offers some of the grandest vistas on its east side.

This one, for instance, was our lunch time view! A salt marsh in the foreground, the Harlem River flowing behind, Metro North’s Spuyten Duyvil train station in the distance and the Henry Hudson arch bridge spanning it all. 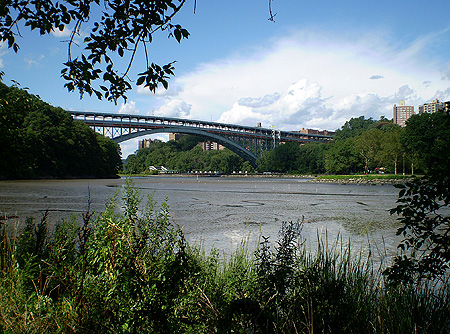 After lunch, it was time to head south along the Hudson. The west side greenway – the longest in the city – starts just a little south of Dyckman St and takes one past Fort Tryon Park, famous for ‘The Cloisters‘, and then into the neighbourhood of Washington Heights. From Washington Heights, one can either continue heading south along the Hudson or choose to cross into New Jersey via the George Washington Bridge (GWB). Having already covered the former on a previous trip, we chose the latter.

It had been a beautifully clear day and the decision to cross the bridge seemed well worth the effort and time.

Not only was this my first time on a bike over the GWB but more importantly, it offered the opportunity of looking back (south) at the very expanse of the island that is Manhattan. I could now truly appreciate how far north we had come! Somewhere, deep within that cluster, I had begun my day at Grand Central Station..

One thought on “To the High Bridge and beyond..”