The urban sprawl is apparent as we drive along I-10, in the western part of Houston, the country’s fourth-largest city. Texans love to drive, and given that the state still has one of the lowest gas prices in the country, that girth is inevitable. So it’s not surprising to know that Rudy’s started off as a gas station, in a little known town in Texas, with a tiny shack selling Ribs. Although that business model has changed little since, more people visit Rudy’s today for its mouth-watering BBQ offerings than they do for inexpensive gas.

Diversity isn’t something you’d normally associate with Texas, but unknown to many, Houston stands out in that regard. A port city, and a centre of academia, Houston is naturally multicultural, with over 90 languages spoken in the city, and expectedly, cuisine offerings to match all those ethnicities. But strongholds remain – as they probably should when it comes to food – and the city offers up some stellar Tex-Mex and Southern Comfort options, not to mention an enviable supply of quality Smokehouses.

Another overlooked facet of the city is the sheer abundance of art all around, ranging from the conventional to the absolute bizarre. Just west of the Museum District, along picturesque Sul Ross St., lies the Menil Collection, a Renzo Piano-designed building housing an extensive private collection of artworks from across the world. It’s a must visit, and it comes at no cost to you!

A few miles northwest, in striking contrast to it, stands an oddity of a house in the Rice Military neighbourhood, built entirely of beer cans! If that weren’t outlandish enough, there’s the Art Car Museum close at hand, to satiate the wildest of dreams…

For a visitor, getting around Houston can be a chore, and although my hosts were gracious enough to offer me their car, I chose the path least favoured – public transport! Mind you, there isn’t a lot of it to be had, save for a patchwork of not-so-frequent buses, and a newly commissioned light rail line that doesn’t always get you where you need to go! But recently, Houston joined a growing list of US cities in implementing a bike share program, B-Cycle; one that’s reliable, cheap and easy to use.

Houstonians themselves haven’t warmed up to it much, but that’s good news for the visitor as bikes are always readily available! The service area is somewhat restrictive but covers most points of tourist interest, stretching from the Downtown Historic District to the Museum District; providing easy access to many of the city’s green spaces – the sprawling Hermann Park amongst them – and also to one of the most unique urban biking trails in the country, which follows the course of Buffalo Bayou.

By contrast, downtown Austin’s compact size makes it a lot easier to get around, and the city is more tourist friendly, in general.  The action is all centred around Sixth Street, a major east – west thoroughfare, but that’s also the most touristy and in-your-face part of town. Think Bourbon Street meets the Gaslamp Quarter, if you will!

A more pleasant option is Red River Street, which intersects Sixth Street on the east, and is home to a number of live music venues, giving credence to Austin’s tag of being the “Live Music Capital of the World”. Even better is the area referred to as “South Congress“, which sits just south of Lady Bird Lake, the city’s main water body. While it attracts its fair share of out-of-towners, it has a lot more character, and offers plenty of variety by way of independent dining and retail options, as well as a handful of music venues.

At the other end of Congress Ave., to the north of Sixth Street, the foot traffic eases off a bit and things begin to feel a lot calmer. There, in the northern half of downtown, the monument-studded grounds of the imposing Texas State Capitol are not to be missed; as is a stroll through the idyllic campus of the University of Texas at Austin. Within it lies a most intriguing Library and Museum, dedicated to former US President, Lyndon B. Johnson.

Already established as a major tech hub, and rapidly becoming one for the media and biotech industries, Austin is in the midst of a construction boom, luring in West Coasters by the hordes! Throw into the mix a significantly lower cost of living, and an absence of state taxes, and the city is guaranteed a steady influx of migrants for years to come. All told, things are only set to be more crowded! Even today, Austin is probably best avoided during its much-hyped festivals, South by Southwest and Austin City Limits.

But there is some respite. In the southeast corner of downtown Austin, far removed from the hustle of Sixth Street, lies the leafy enclave of Rainey Street. A historic district in its own right, it boasts a collection of old bungalow-style homes, dating from the early 20th-century, a lot many repurposed to house cafes, bars and restaurants. Blissfully devoid of traffic and tourists (so far!), the area has a laid back vibe to it; eating and drinking establishments to suit every mood and budget; and plenty of bicycle parking to boot! Simply put, it is one of the most secluded and charming experiences you can hope to have in Austin.

As would be expected, Austin’s food scene is surging too, and by many estimates, already contending with top US cities. Home to the original Whole Foods (the company is still headquartered there), the city offers up everything from top-of-the-line culinary destinations, headlined by celebrity chefs, to more down-home local favourites like Torchy’s Tacos and Trudy’s Texas Star. Not to mention, the endless lines snaking around its many storied barbecue institutions, Franklin and Ironworks, to name a few.

But for the most fun, pocket-friendly and wide variety of grub, nothing beats the food trucks of Austin! Really, this city is food truck heaven! Often, you don’t have to walk more than a couple of blocks to stumble upon one, or, in many instances, a whole parking lot full of them! Each one is creatively named, gaily decorated, and invariably offers something unique. From Thai-style Crepes to specialty Doughnuts, the city’s trucks (and trailers) have got you covered…

More than anything else though, Austin is probably envied most for its outdoors, and a year-round climate that’s conducive to the same. The city abounds in parks and trails, a lot of them within earshot of the city centre, and some, like the Shoal Creek Trail, beautifully integrated into it. There is no bike share (yet) but bicycling is extremely popular, and the streets are bike-friendly for most part. This is Lance’s hometown, after all, and in the event that you don’t run into the familiar spandex-clad figure on the streets of Austin, you could always rent a bicycle from Mellow Johnny’s, the Armstrong-owned bike shop!

Located southwest of downtown, along Lady Bird Lake, is the sprawling acreage of Ziker Park, Austin’s preferred green space, and the venue for the City Limits Music Festival. If you’re headed there, be sure to pack in some swimwear, for the Barton Springs Pool is definitely worth dipping into. The recreational pool draws its water from a namesake Spring and maintains a comfortable temperature of 20 – 22 Celsius throughout the year!

A reservoir of the Colorado River, Lady Bird Lake (formerly Town Lake) divides the city into its north and south. Along its shores is an extremely popular, 10-mile long hike and bike trail, which forms a complete loop, and also provides its users a half dozen crossings in between. It is in this sylvan setting that Austin’s runners, walkers, bikers – and sometimes, kayakers on the water – are out in full force, doing what they love doing and taking full advantage of their hometown. A city propelled by its outdoors…

Lockhart, a town of 12,000-odd people, lies about an hour south of Austin, and is considered by many to be the BBQ capital of Texas. With no less than 4 barbecue restaurants to its credit, and an estimated 250,000 annual visitors to the same, Lockhart is every bit worth the detour.

The oldest of these establishments is Kreuz (pronounced “Krites”), a 113-year old operation that shows no sign of fading, and continues to live up to its motto: no sauce, no forks, no kidding! It’s as quintessential a Texan experience as it gets, and you will be remiss leaving it out of your itinerary… 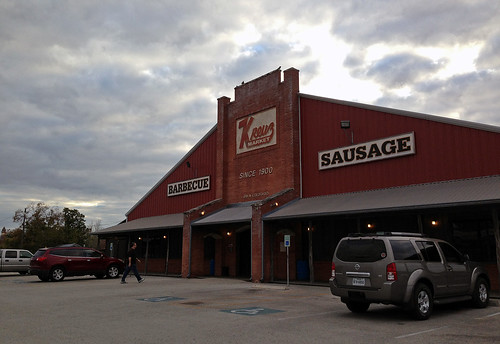 A full set of pictures from my visit to Houston and Austin can be seen on Flickr.

One thought on “Lone Star Musings”