Welcome again and thanks to all of you who had a look at day 1 and posted comments. Apologies for short changing you with that lone photo which was incidentally taken from the aircraft itself – look closely and you might even be able to spot good ol’ Everest in that formation!!

A leisurely start on day 2 thanks in no small measure to the cold which kept me from emerging from my many layers of cover. You can be rest assured the morning shower was even more painfull. The mission today was to location scout for day 3’s train chase. First stop was Darjeeling station. 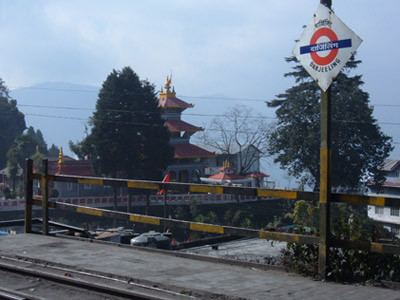 Kurseong at 4864 ft is about 2000 ft lower than Darjeeling and the half way point as you drive down to or up from the plains. As with most popular hill stations in India this half way point is a more recommended destination than Darjeeling itself. The road journey to Kurseong usually takes about an hour but on this day it would take us close to 4 – much to the frustration of young Roshan – as we’d stop ever so often at a location I thought would be good to shoot from the next day. Ok, for all you non railway geeks out there (a majority of my mailing list no less) a train chase is simply as it suggests – chasing the train! The purpose being to get to previously earmarked locations to photograph or film it from. Oh and you have to get there before it does, otherwise you’ve lost the chase 😉

One of my favourite locations is Batasia as seen from the house of Norbu Sherpa.

Batasia is one of 3 spirals or loops on the Darjeeling Himalayan Railway and it’s claim to fame is that on a clear day (I never seem to get those!) one can see uninterrupted views of the 3rd highest mountain in the world – the Kanchenjunga or Kanchendzonga as it’s locally referred to. I was welcomed warmly by Norbu’s wife who remembered me immediately from my trip in July. She confirmed that he had received the photos from July and that instantly put a smile on my face. God bless the Indian postal system – it has never dissapointed me so far – no matter how remote the location might be. I would be back to meet Norbu the next day.

By the time I got down to the road, Roshan was being spoilt silly by the folk who run the refreshment stalls at Batasia. Hill children are tough subjects to resist for photography and along with their elders and betters they obliged without a fuss. 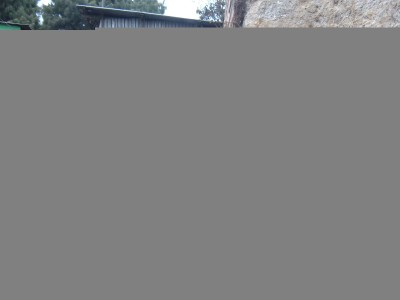 It has often been said that it’s the people that make a place and it’s never been truer for me than in the case of the Darjeeling Hills. I cannot recall a single unpleasant encounter that I’ve had here – this being my 5th trip to the area. And I would never hessitate to return here again – not just for the train but for the people to. They are an ever smiling, cheerful, warm and friendly lot with a strong sense of community and kinship. They are soft spoken, not in the least bit aggressive (a far cry from the rowdy north that I’ve become so accustomed to now) and completely non obtrusive. Jeez even they’re touts seem a passive bunch. And not to mention what a fit and good looking set of people they are. I’m pretty certain I missed a few good locations today thanks to some local stunners (no shortage of them!) passing by – the delights of Darjeeling as I like to call it 😉

After scouting over a dozen locations for my shoot on day 3, we finally made it to Kurseong but not without a diversion a little out of town to ‘Cochrane Place’. A boutique hotel converted out of an old English country home and a place I’d recommend to anyone visiting Kurseong. Set between Ambooti and Makaibari tea gardens you are literally in tea country. 13 unique rooms with a diverse collection of antiques and art pieces from around the world and stunning views to boot.

The hotel oozes character and charm from every nook and cranny. If your not staying over, then definetely visit their ‘Chai Time’ Cafe for some delectables and remember, Darjeeling Tea is best enjoyed without milk 😉 All of this might sound like a marketing spiel to most but it’s probably worthwhile. Oh and another reason to go there is that it’s built around a theme of tea and trains! Trust me, you’ll love it.

It was now close to 4 pm and with our combined appetites getting the better of us, we made a dash for Amarjeet’s Dhaba at Kurseong. I have to admit here that my bias for this eatery is also because of the fact that its located bang in the middle of the steam loco shed and the station – a big thumbs up for that! After having the Kurseong version of the Aloo Paratha (2 no less!) and feeling guilty for it, I made my way to the Tourist Lodge and ended up getting exactly the same room my sister, Kulsum and me stayed at in July – some coincidence! With familiar surroundings and a heater for company, a good night’s sleep beckoned me..