I moved from Brooklyn to Queens about four months ago. My stay in Brooklyn was almost a year long but as it always happens, one tends to ignore the sights and sounds of one’s own backyard. You hear about places to visit and things to do but the fact that they’re around, you just take it all for granted. Couple that with the fact that, like it or not, Manhattan is where all the action usually is anyway! Brooklyn was no different for me. But in a desperate effort to redeem myself, I dedicated my last few weekends in the borough to ‘do the rounds’ so to speak!

For those of you who’ve had it being isolated on the various islands I’ve covered these past few weeks, make no mistake – contrary to it’s name, Coney Island isn’t one! Located at the southernmost part of Brooklyn, this former island is a peninsula today which runs about 4 miles in length and hosts NYC’s only real beach.

I took the tried and trusted Q train down to Brighton Beach station – 3 stops away from it’s terminus at Stillwell Avenue. The plan was to walk a little over a mile along the Riegelmann Boardwalk starting at Brighton Beach in the east and ending at the Coney Island train station where I’d catch my train back to Cortelyou. 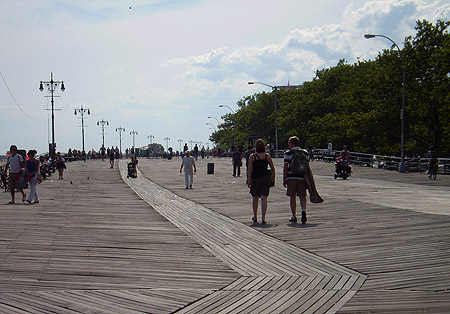 Often referred to as ‘Little Odessa’, the Brighton Beach neighbourhood is home to the largest population of Russians outside of the former Soviet Union. It has also found mention as the home of the Russian Mafia in various texts. While I didn’t quite see any mafiosi lurking around, there is an air of distinction in this part of Coney Island which sets it apart from the rest. 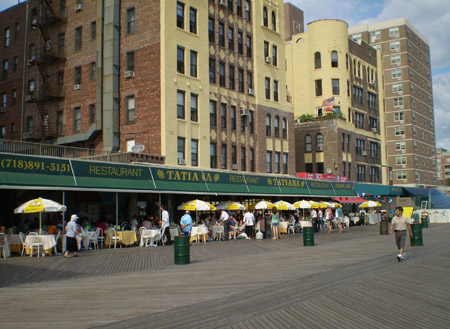 Restaurants and Cafes with names like Volna, Tatiana and Moscow line the boardwalk here and everything moves at a decidedly slower pace than the hectic frenzy I was about to witness ahead. Even the action on the beach is more laid back and if my eyes weren’t deceiving me, I could have sworn the architecture looked a tad Leningrad’ish – not that I’ve been there! Certainly unlike any other I’ve seen in the city and the same can be said of the overall vibe one gets in this neighbourhood.

Leaving little Russia behind and about a half mile of soaking in the sun, the sands and the Atlantic Ocean later, the activity on the beach is noticeably higher. Families, couples and sports fanatics jostle for space on the sands and the coveted spots appear to be as close to the water as possible. 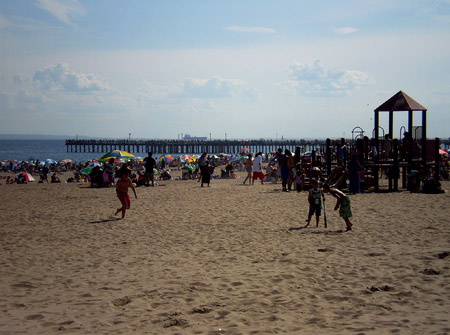 It is a beach like any other – the only difference being it serves a population the size of New York City and leaving aside the genteel pace of Brighton Beach, in summer months Coney Island is a much sought after weekend getaway for thousands of city residents.

Some of the action invariably spills over to the boardwalk. 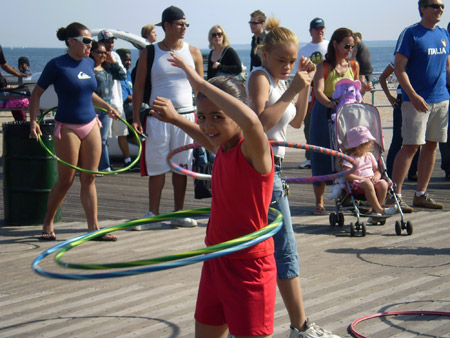 Coney Island was first developed as a resort and the site of many amusement parks. The resort status has long disappeared and only the Astroland remains today as the sole surviving amusement park. Amongst the parks many attractions is Cyclone – built in 1927, this is one of the last operational wooden coasters in the country and still provides enough screams for amusement park starved New Yorkers! 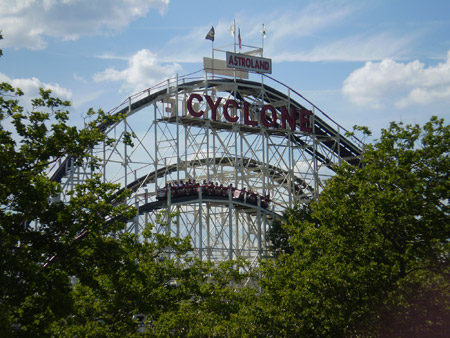 Set against the backdrop of the parks colourful rides is a never ending row of open food stalls which are as ‘old school’ as it gets. Here is a slice (or many slices!) of Americana for the taking. 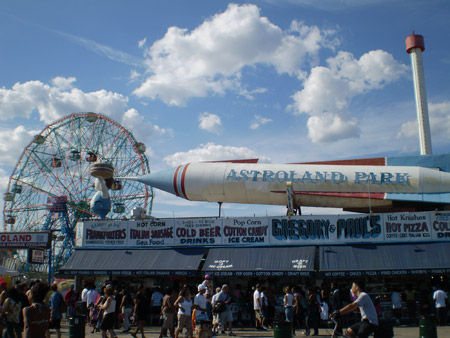 A far cry from the swish eateries of Manhattan, this place will surely give city slickers that ‘all American experience’! And of course no visit to Coney Island is complete without Hot Dogs at the original Nathan’s – an institution dating back to 1916. 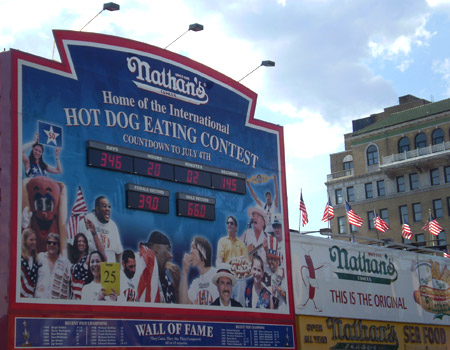 While I didn’t quite match up to the high standards of those contestants, I braved the 20 minute long queue to be served an outstanding (if you could call a Hot Dog that) Frank on a roll topped with Sour Kraut Relish and washed it all down with some home style Lemonade. My server had a distinctly East European accent and the contest itself has been won 6 consecutive times by a young Japanese man. That’s New York for you!!

Coney Island station on Stillwell Avenue was built in 1919 and almost completely rebuilt in 2005. Serving as the terminus for 4 New York Subway lines, it is considered one of the largest over ground terminals and more importantly, the most energy efficient mass transit facility across the US. Interestingly, it’s energy requirements are met entirely by it’s European style glass train shed covered with solar panels. In a nation obsessed with the motor car, here is a breadth of fresh air – pun intended!

The terra cotta facade of the main entrance is a fitting welcome to this grand station. 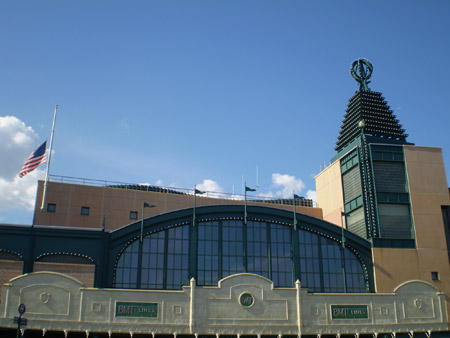 The Q train ride back home offered some grand views of the Atlantic including this last glimpse of quaint Astroland. 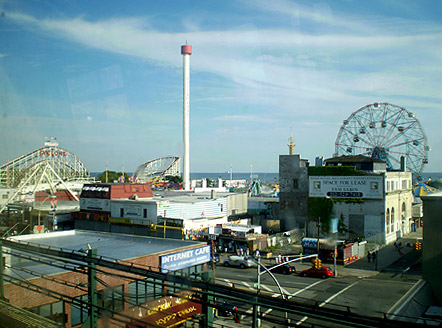 The following weekend found me wandering around Prospect Park. Although in this instance you would be forgiven for believing I was deep down in the tropical rain forests of Burma. 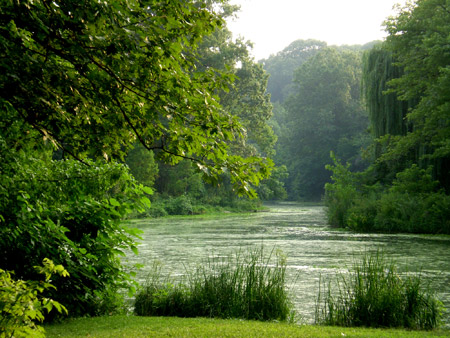 I firmly believe that 2 of the biggest FREE perks of living in this city are the Public Library Service and the facilities offered by the Dept. of Parks & Recreation. While I cannot, under any circumstances, claim to be of the literary bent of mind (mind you, I do have a NYPL card) I do take full advantage of the city’s many parks and recreational centres (read indoor heated pools).

Central Park in Manhattan is easily the most celebrated of the city’s parks but pretty much every borough has its own flagship park. In Brooklyn, it is Prospect Park that rules. 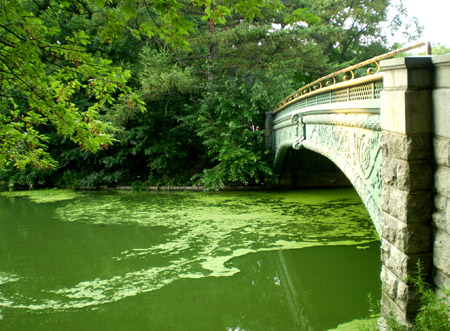 Built in 1867 by the same men who designed Central Park, this park occupies about 600 acres of land and includes endless tracts of meadow land, a stunning man made lake, a nature conservancy and a beautiful boathouse. 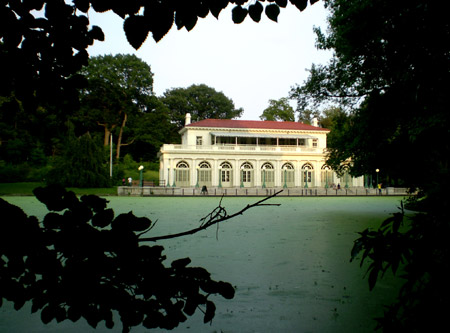 With the honourable intention of studying the architecture of the boathouse more carefully (which I likened to be Lutyen), I stumbled upon what seemed to be a photo shoot of significant proportions – no pun intended! 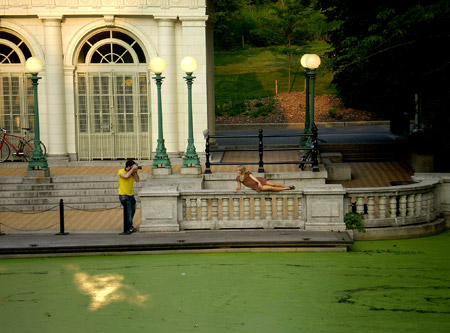 I would return many weeks later on my bike to do the full loop around the park. While it doesn’t quite offer the scale and expanse of Central Park, it is in my mind, equally beautiful. And just like it’s more celebrated big brother in Manhattan it does offer the same sense of reprieve and sanity from the rigmarole of every day life to residents of the city’s most populous borough – Brooklyn. 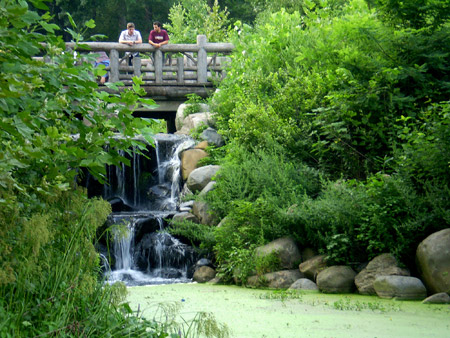