It’s been sometime since I visited LA – the subject of my last blog. In between I’ve been to Chicago, the UK, made several small trips around New York, graduated, got a job and basically had a wonderful summer so far. Oh and I’ve also moved – from Brooklyn in Kings County to Long Island City in Queens County! About time I thought – if nothing else, at least the ‘move’ deserves to be blogged!

3830 29th St has been home to me for 3 months now. It’s also the 3rd apartment I’ve stayed in while in New York and better still my third borough (of 5) in the city. As always we’ll begin with a little help from friendly google maps.

Long Island City, often confused with Long Island, is pretty much the first neighbourhood one encounters as you cross into Queens from Manhattan. For the longest time, this hood was regarded as one large industrial area full of decrepit factories, warehouses and rail yards. All that has changed of course after real estate developers realised how close it was to Manhattan. Some parts of it – south of the Queensboro Bridge and facing mid town Manhattan have since been gentrified but I haven’t been fortunate enough to make it there.

As you can see my neighbourhood still looks fairly industrial and basic (short of being ‘ghetto’) and not a patch on the pretty Brooklyn neighbourhood I once called home. But that’s as far as the downside goes and looks, as they say, aren’t everything. I’m a 2 minute walk from the subway station and add a 6 minute train ride to that and you’re in Manhattan! My commute to work is a little longer though – 14 minutes in all – and that’s because my office is located all the way west in Hell’s Kitchen. It still takes half the time door to door to get to work than it did when I was in Brooklyn. And that’s not all – the rent is almost half of what I once paid in Brooklyn and not to mention a fraction of the cost of my West Village pad (er room!). Ok, so the views aren’t as great as my Brooklyn train ride, but…they’ll do..

I share the apartment with 2 guys and a girl and no we don’t have a pizza place close to us (bad joke I admit!). One of the guys is from Lebanon and went to Parsons with me and the other from Israel and you guessed it, they both get along like a house on fire – they do, honestly! The girl’s from Colombia (easily confused by most Americans with the Ivy League institution) and also goes to Parsons – a year junior to us. We also have a cat by the name of Luke. 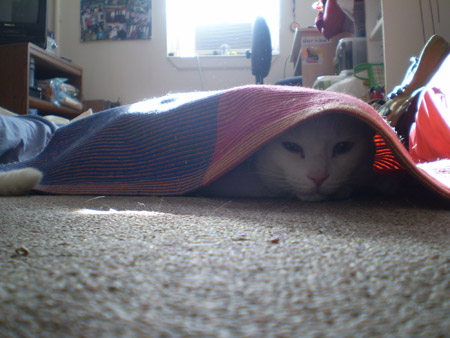 My part of Long Island City (or LIC for short) borders the older and better known Queens neighbourhood of Astoria. Astoria is probably best known for it’s beer garden – the last original of its kind. Yup, in summer months and during Oktober Fest people from Manhattan make the trek (so to speak) to these parts! Astoria is also well known for its large Greek community and their accompanying eateries. Broadway is where all the action is here in terms of nightlife, eateries and stores. The best Colombian food (steak to be precise) this side of Bogotá is another sure pull east of the East Rvr.

But all those are all still a couple of stops away from me. My immediate hood or rather my block has the more humble eateries around it – a Brazilian place which I’m still to try and rather curious about; a cafe/deli right by the train station (one day I’ll be sure to get breakfast there) and of course Cheap Chinese – what would we do without them! Between here and Broadway, the next level in culinary delights is 3 blocks north in the largely Bangla dominated 36th Avenue. Even there skewed version of a goat curry rice is enough to get me all homesick!

The ethnic mix in my area is largely South American and South Asian and not quite as diverse as previous neighbourhoods I’ve inhabited. No complaints though – it’s quiet, laid back and safe. But the overall convenience of the location (I’m a lot closer to the airports as well) and close proximity to Manhattan are really its high points and there’s no taking away from that.

An apartment building is being built right across the road from us. It was 4 stories high when I moved here. It is 13 stories high today. New constructions and developments like this will soon transform even these ‘not so gentrified’ bits of LIC. That would certainly lead to higher rents in the area and very soon I might find myself scouting around, yet again for my next neighbourhood, even another borough maybe – who knows? Bronx or Staten Island anyone?

Till then its Viva LIC!