I awoke sunday morning to find that I had a heavy head and nasal congestion. The cold had finally taken it’s toll on me. It was all downhill from here on in more ways than one. I would head for the plains in a bit, descend a steep road and my physical condition would deteriorate as the day unfolded. Worse still Roshan had decided to ditch, sending in a replacement in the form of Sushil Sherpa and a larger vehicle for company! I wouldn’t have minded so much had it been a Land Rover!

9:30 and we were on our way..leaving behind homely Alice Villa and her friendly staff.

The property you see behind Alice Villa is ‘The Elgin’ – another well restored heritage Hotel. The Windermere would be to the right of this photograph and a couple of levels higher. This is actually quite a charming part of Darjeeling..close enough to the Mall but far away from the crowds and traffic. It is also home to some fine buildings other than the ones already named here. Loretto College, a church and a theatre whose names I seem to forget. Some nice ‘pedestrian only’ trails in the area to. And the best part is you can hear the whistle of the train far below at Darjeeling station 😉

We did Kurseong in a little over an hour due to traffic congestion while leaving Darj and soon after passing the Kurseong tourist lodge, the young Sherpa veered off the Hill Cart Road onto the less used Pankhabari road – I was going to be seeing it by day and soon enough I knew I had no reason to complain. After passing through the back roads of Kurseong you immediately hit Tea Garden country and picture perfect sights like these are a dime a dozen..

After cutting through the heart of terraced tea gardens, we once again pass Castleton T.E. where the driveway to the manager’s house looks more than inviting! Cochrane Place is passed next and we are soon into the thickly wooded Terai forest. The road gets really narrow and steep at this point and Sushil Sherpa does exactly what he’s trained best to do – respect uphill traffic! No wild elephants or cheetahs this time either but I am left in complete awe of the dense jungle cover. Traffic is thin (thankfully!) and the only humans to be seen are the locals carrying bamboo and leaves up to their villages – not an easy trek by any means.

The forest cover continues till the town of Pankhabari – the only one en route and from there on the gradient starts easing up a bit – signaling the impending arrival of the plains. We are still in the foothills though and the views of the jungle we’ve left behind still warrant a few sighs. The Terai is truly magnificent and I start imagining what it would look like in all its monsoon glory – I swear to be back one day to savour it all again.

It’s almost 2 hours since we left Alice Villa and we are about to hit the plains now but boards like this make me want to turn back. 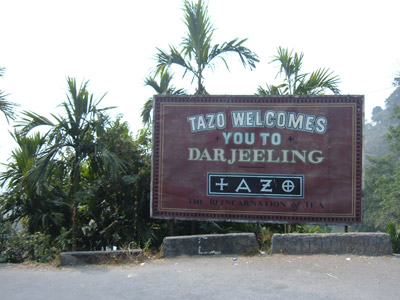 I know I’ll have a huge smile on my face when I see this brand selling wildly in Starbucks outlets a week from now and I’ll be sure to wonder aloud if they actually source their leaves from Darjeeling or simply ride on its brand?!

More tea gardens are passed and soon we hit the grand army cantonment of Sukna – home of the 33 Corps. It’s always a pleasure driving through cantonments and like thousands others across the country, this one to is impeccably maintained. After Sukna we pass though the Mahananda wildlife sanctuary and we finally hit reality a few kms later – the outskirts of shabby old Silguri! On to Bagdogra airport from there and a delayed flight to Delhi – for a change I was the one on time and had my ticket on me!

Humans are greedy by nature and I’m certainly no exception. Gloating in that fact I resolve here to be back in the Darjeeling Hills for more..